I’ve just finished reading Mark Lidzbarski’s German translation of the “Book of John” (Mandaic). I hope to put a precis of the book up on this website. 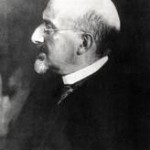 Lidzbarski was a real Mandaic specialist, a true devotee of this obscure and much-reviled religion. He copied out—by hand—the entire Book of John (which I also possess in photocopy). The result is a work of art, and one remains speechless before the gargantuan effort represented by those 290 pages in impeccable handwritten Mandaic (not a single crossing out can be found). Even the footnotes are in Mandaic, with only a few abbreviations in German to guide the reader. While I’m presently struggling to get a foothold in reading Mandaic, Lidzbarski’s work as a whole must evoke supreme admiration.

Having finished Lidzbarski’s easier German edition, this afternoon I turned to a pile of photocopied texts on Mandaism that remain unread on my shelf. They include two monographs with the same title: “Le Mandeisme et Les Origines Chretiennes,” one by Robert Stahl (1930) and the other by Alfred Loisy (1934). Since the books were published only four years apart, I cannot help but suspect that Loisy intentionally ‘borrowed’ Stahl’s title and that Loisy considered his own work an ‘improvement.’ Not knowing anything about Stahl, I began with the more familiar Loisy who writes in his introduction (my translation): “Christianity would have arisen out of this primitive Nazoreanism. Jesus was a disciple of John, whence came his surname Nazarene” (pp. 6-7). Later, Loisy asserts that the Christian religion originated “in a gnostic system which first would have been preached by John the Baptist and which can be recovered in the Mandean scriptures” (p. 8). A page further on Loisy directly disparages the work of his predecessor Stahl: “One of our mythologues presumed that the author of the Fourth Gospel invented the biography of Jesus in order to dispose of the Mandean John and to correct the gross notion regarding the Holy Spirit possessed by the first Christians—glossolalians who stammered at the name of a purely celestial Christ. However, it is hardly necessary to resort to such rank fantasy” (emphasis added).

So—being a mythicist—I promptly put Loisy aside and picked up the Stahl. To be continued…