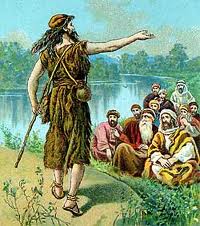 1. A PREACHER (“Teacher”) is born in Palestine towards the beginning of the common era. He claims to have found answers to the ultimate questions facing mankind and attempts to teach others the “Way” to understanding and fulfillment. His teachings conform to the Gnostic type and are fundamentally secular—the exercise of human reason and the application of effort towards the “understanding of life” (Mandaic: manda d’hayye).


2. THE REBELLION: The Teacher challenges the religious institutions of his time and place (as did the Buddha and Zoroaster before him). He considers Jewish teachings useless and misleading: cant, rite, sacrifice, and obedience. Though born a Hebrew, he rebels against Judaism. 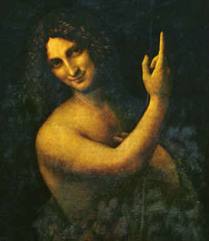 “John the Baptist” by Leonardo

3. THE BEGINNING OF A NEW RELIGION: Some followers listen to the Teacher and value what he says (and/or writes), though they don’t entirely understand (Mk 7:18). He claims to have found Truth (‘enlightenment”), but they have not. After the Teacher dies, these disciples start mixing spurious religious elements with the Teacher’s sayings and persona. Instead of looking at the teaching (“the moon”) they look at the Teacher (“the finger pointing at the moon”). The Teacher becomes a “prophet” and his followers become “disciples.”


4. THE SECOND MOSES: While completely immersed in the Jewish religion, the disciples venerate the Teacher as unique. For them, he was in the long line of revered Jewish prophets. But he was also more than a prophet: a second Moses. This concept of a special “returning Prophet” corresponds to the Samaritan theology of the taheb. (This stage = the theology of James and of the “pre-Christian” Natsarenes.)

5. THE HEBREW MESSIAH (“CHRIST”): The disciples maintain that the Prophet bridged the unbridgeable chasm in Judaism between man and God (Gen 3:24). He was somehow a composite figure, both human and divine. The followers believed that the Prophet was the messiah (“Christ”). He figuratively stretched from earth to heaven (Gospel of Peter 40). He was unique, the adopted Son of God. (This stage = Urmark). 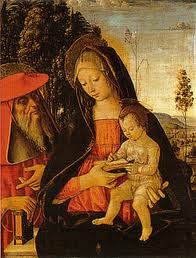 6. THE HELLENISTIC “JESUS”: The Hellenistic tradition offered many examples of the human-divine fusion (Orpheus, Apollonius, etc.). Some of these composite figures were demigods—half human and half god—that is, they were the offspring of a human and a god (Hercules, Theseus, etc.). It was easy to transfer the Hellenistic concept of Divine Man (GK: theios aner) to the Prophet: he was the offspring of both God and a human mother—“Jesus.” (This was eventually codified in the birth stories in GMt and GLk.)

7. THE DIVISION: By this stage, the organic growth of the new religion encountered a limiting obstacle: the Teacher’s humble biography. His life actually took place in the backwaters of Palestine. He was unnoticed by contemporaries, and his obscure ministry hardly matched the now exalted image of the Prophet gathering legendary elements with formidable strength and speed. There was a point of no turning back: either one honored the “old” uninspiring biography of the Teacher, and hence watched the movement slowly atrophy and perhaps die; or one went with the burgeoning excitement that religious fervor and imagination were offering. At this point, the “Jesus followers” were starkly divided (Acts 6:1-6), for the “Hellenists” had invented a larger than life figure whom the “Hebrews” (Nazorean followers of James) repudiated. 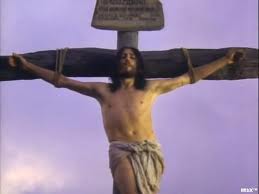 8. JESUS OF NAZARETH. By degrees, the Hellenists collected fabulous stories circulating about the Prophet and fleshed out a new and more “appropriate” biography for him. They recognized the unprecedented power resulting from a fusion of (a) the profound teachings of the Prophet, and (b) their new and grand biography of “Jesus of Nazareth.” With this potent combination of impressive teachings (logia and parables) and impressive form (Jesus of Nazareth), they went forth to conquer the world. (This stage = the canonical gospels.)

9. MUTUAL REJECTION: Those around James the Just accused the Hellenists of betrayal and of “the great lie.” The Nazoreans were the first “mythicists.” The Hellenists, in turn, accused the Nazoreans of “denying that Jesus had a body,” “that he was truly born,” “that he truly died,” etc. (Ignatius, Letter to the Smyrnians, etc.). Modern scholarship refuses to admit the existence of mythicists in ancient times and mischaracterizes the applicable passages as referring to “docetists”—a nebulous term subject to various interpretations ranging from those who denied that “Christ” was in “Jesus,” to those who thought Jesus was a mere phantom. However, these interpretations to not reach the nub of the matter which so exercised the Church Fathers—that there were those in antiquity who denied the existence of Jesus of Nazareth altogether.

10. FUSION WITH DIVINITY: Jesus was the only-begotten Son of God (GMt, GLk), and finally he was God Himself (GJn). The Pauline kerygma offered the mechanics to effect a complete fusion of the prophet “Jesus Christ” with God: in a unique intervention in history, Jesus Christ was sent by God the Father to redeem mankind from sin. He died for our sins on the cross and arose from death to be forever with God. Jesus will return on the Day of Judgment. Those who believe this are saved. All others are damned.

As they say, “the rest is history.”—René Salm 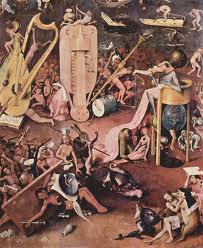 “Hell” from the tryptich “Garden of Delights” by Hieronymus Bosch