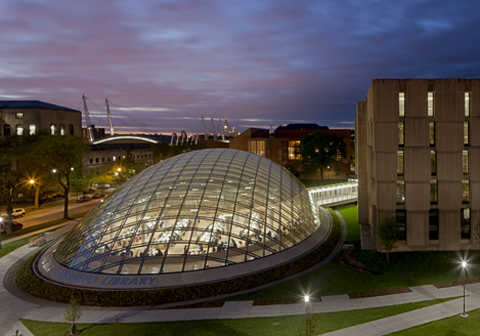 University of Chicago libraries at sunset

At the University of Chicago library

Sometimes I travel just to spend time at a well endowed library. Not too long ago I spent a very productive week in springtime at the Graduate Theological Union library in Berkeley. For me, that’s even a better vacation than lounging on the sands of Hawaii. One of my reasons for accepting the SBL speaking engagement was to be able to spend time at the world class Univ. of Chicago library. With about ten million volumes, it’s more than three times the size of the (entirely respectable) Univ. of Oregon library which I routinely use.

Over the previous year I had prepared in advance a list of (mostly obscure) books and articles available in Chicago but not in Oregon. On Monday evening, after the SBL sessions, I took the train out to the U of C campus in South Chicago. The library is actually a complex of buildings. (I used the Regenstein library, which is the squarish structure on the right in the photo.) It never closes but I had to get back to my digs and so stopped photocopying (10¢ a page) at about 10 pm. The following day, after the last SBL session on the Levites (see below), I was back out at the library at midday where I hunted the stacks and fed the photocopy machines until 10:30 pm.

As regular readers know, one of my research interests focuses on pre-Christian gnosticism—so threatening to traditional Christianity and Judaism that it’s very existence is still contested. I am convinced that the Christian religion has a very old gnostic core traceable back through Judaism to the Bronze-Iron age religions of Egypt, Ugarit, Mesopotamia, Persia, India (Buddhism is a gnostic religion) and even back into Neolithic religion at the dawn of history. In any case, one thread uniting these religions is the pervasive symbolism whereby water = gnosis. This survives in baptism, where dipping into water is the quintessential spiritual transformatory event.

The hodegpodge of material I photocopied at the U. of Chicago includes the following that I will be reading during the next few months:

Yet another house ‘from the time of Jesus’

In addition, I copied some Mandean texts, works on the Essenes, articles from a favorite European journal (Biblische Notizen), and some obscure reports by Ken Dark on Nazareth. Dark has recently been excavating under the Sisters of Nazareth convent and claims to have found an Early Roman house. We recall Alexandre’s allegation of the same, but Dark claims he was “the first” to find a structure ‘from the time of Jesus.’ I shall let the two fight it out and hope that credit is eventually given where it is due. However, I wonder how one can date meager structural evidence under the Sisters of Nazareth convent so precisely and without any accompanying movable artifacts (pottery, etc.). Furthermore, a large kokhim tomb is there, and Dark is quite aware that Jews did not live in the vicinity of tombs. So, I plan to analyze his claims carefully and shall watch his developing theories regarding “Jesus’ Nazareth” with interest and curiosity.

Levites reduced to singing in the Temple

I attended both sections of the SBL unit on the Levites in the Iron Age. My interest in the Levites stems from the growing suspicion that they represent a pre-Judaic strand of the religion, one suppressed (and supplanted) by the Jerusalem “Aaronides” in post-exilic times. It is the Aaronide priests who created Torah and Temple Judaism familiar from scripture. I further suspect that the pre-Jewish levitic religion was gnostic and linked, for example, with both “Bethlehem” and with the sanctuary of Dan in the North. “Bethlehem”—as explained in my article “The Natsarene and Hidden Gnosis.”—meant “House of the (gnostic water god) Lahmu” not “House of Bread” as traditionally interpreted.

In the following, I’ve bolded some key terms/phrases:

– Victor Matthews (Missouri St. Univ.): People could become Levites even if not genetically of the tribe of Levi. To be a “Levite” was to serve a cultic function among the people. Landless sons (e.g., the 2nd and 3rd sons who did not inherit) were free agents and available to become Levites.

Mt. Hermon (the original Zion),
meeting place of man and the gods.

– Thomas Pola (Dortmund, Ger.): Mt. Sinai in the Priestly source is in fact Mt. Zion. This equivalence is of considerable significance. Mt. Zion (Tsion) was the mythical and religious home of the gods and the quintessential place of communication between man and the divine. It was claimed by several Iron Age traditions and variously located in Sinai, N. Arabia, Jerusalem, and Mt. Hermon. The Jerusalem temple was located atop Mt. Zion and was a symbol for the entire cosmos.

– James Watts (Syracuse Univ.) presented on “Scripturalization and the Aaronide Dynasties.” He concludes that only one “family” was responsible for scripture writing between c. 535 and c. 172 BCE. These were Oniads who claimed remote descent from Aaron and closer descent from the post-exilic High Priest Jeshua ben Jehozedek. (I asked Mr. Watts about the interesting scribal family mentioned in 1 Chr 2:55: “and the families of scribes who lived at Iabets. These families were the people of Tira, Shimea, and Sucah. These people are the Kenites who came from Hammath, the father of the house of Rechab.” Mr. Watts did not deny that scribes lived outside of Jerusalem. However, I did not press him further.—R.S.) “The High Priest was at the top of Israel’s only hierarchy.”

– Mark Boda (McMaster Univ.) spoke about the vision of the lampstand in Zech 4:1-6. His talk explored symbolic aspects mentioned in that passage. These elements may have some bearing on NT symbolism. E.g., Mr. Boda noted that “oil” in the vision was not for anointing but for fuel (cf. Mt 25:3). “The oil fuels the eyes of Yahweh which roam over the earth.” (Those all-knowing eyes readily lend themselves to a gnostic reinterpretation. Hence, the “oil” = gnosis.) A further possible symbolic link with the NT was Boda’s assertion that “the flame was to be kept lit all night by the family of Kohath.” (Mt 25:5 ff.)

– Claudia Losekam (Ruhr-Universität Bochum) spoke on “Josephus’ concept of priestly leadership after the destruction of the temple.” Losekam stated categorically: “Josephus himself was a priest. His work is a priestly history.” She continued: “The writings of Josephus belong to the sources from which we know that priests and priesthood are considered as valuable institutions. Reasons why priests and priesthood are treated in a positive way by Josephus range from biographical experiences and views of the priest Josephus, his awareness of the high reputation of priests in the eyes of roman authorities to his personal belief that priests combine in an ideal way important functions of spiritual and political leadership.” I asked Ms. Losekam how Josephus spending three years with Banus in the desert as a young man squared with his “priestly” status. She found no contradiction here but didn’t really answer the question.
Losekam mentioned “the inauguration of Aaron through God via Moses in A 3:188-192, [Josephus’] admiration for John Hyrcanus, and his thoughts about a so-called Jewish Constitution in Contra Apionem (2:185-198). Josephus’ positive image of priests and priesthood does not only represent the memory of an ideal priesthood of the past but also favors priestly leadership after 70 C.E.”—R.S.