One might suppose that the problems with Nazareth archaeology which my book raised have, in the last few years, been assiduously ignored by the religious mainstream—whether we are speaking of the academic establishment, the media, or the public. After all, the Tonight Show has not invited me on as a guest, my book has not sold millions of copies, and not even a single tenured professor has explicitly endorsed my work. This is all quite true, yet curious events soon began occurring in Nazareth after the 2008 publication of The Myth of Nazareth: The Invented Town of Jesus. Within a year, an archaeologist working for the Israel Antiquities Authority (IAA) was touting the discovery at Nazareth of a “house from the time of Jesus” (see below). The story was trumpeted at blinding speed around the world in a major media campaign which, no doubt, cost a formidable amount of money. 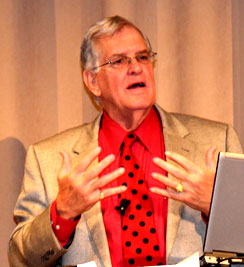 Soon, James H. Charlesworth was on an airplane to Nazareth, Israel, after appearing on TV talking up the discovery of the ‘first real proof of the town of Jesus.’ At 5 min. 20 sec. into this linked interview Charlesworth is telling Bill Hemmer of FOX news, “Yup, I’m going back to Nazareth!” Well, I hope he had a good trip, had a nice interview with Yardenna Alexandre about the “house”—which actually was an elaborate Middle Roman installation for producing wine (with treading floor, collecting vat, and storage pits)—and that he had a nice trip back to the good ol’ U. S. of A. and to his prestigious Princeton professorial position.

Like Jesus mythicism itself, views such as mine are still too impolitic and threatening to be a part of respectable conversation. However, though few scholars wish to be openly linked to such explosive issues, mythicists may have more support than meets the eye. Robert Price, Thomas Thompson, and Lena Einhorn recently presented provocative papers at the 2012 SBL convention, papers challenging the traditional paradigm. I, too, presented a paper on Nazareth archaeology there. Half a dozen articles of mine have recently appeared in American Atheist magazine, and the British scholarly journal BAIAS published a Nazareth article of mine. So, there are signs that radical work involving Christian origins is not entirely falling on deaf ears.

Perhaps reacting to the groundswell of mythicist literature in the last few years, in 2012 the tradition finally blinked with the publication of Did Jesus Exist? by the well known New Testament professor Bart D. Ehrman. The book shows that the issue has become sufficiently threatening to merit a full scale frontal assault—the first ever. A fierce battle is currently being waged—largely below the radar screen of public perception—between the New Atheism on the one hand and traditional Christianity on the other. The stakes are high and the trench warfare is characterized by lots of mudslinging, with lots of heat and sometimes not a great deal of light.… Today, discussion of the “no-Jesus” thesis is primarily taking place on the uncensored Internet, in blogs, and in chatgroups.

Meanwhile, over in Israel, the tradition has reached a new zenith of confabulation when it comes to the archaeology of Nazareth. Since publication of my book, several highly questionable claims of new “evidence from the time of Jesus” have appeared in the popular press. Significantly, however, they have not seen publication in scholarly journals. This is immediately suspicious, for archaeological “evidence” exists only when it is accompanied by parameters such as itemization, context, parallels, and visual representation. These are what permit other scholars to evaluate reported claims. Otherwise, archaeologists could claim whatever they like and the world would simply have to take them at their word. In the case of Nazareth, apparently, blind trust is the order of the day and many scholars are content to do just that.

I could give many examples. In the popular press, Ms. Alexandre claimed a house (that’s right—it’s the wine installation mentioned above) from the time of Jesus but no professional report ensued. In addition, the short notice of the excavation that (by law) must appear in official Israeli records made no mention at all of evidence from the turn of the era (“time of Jesus”). Finally, the serendipity of this finding must strike us as suspicious. Let me explain… Ms. Alexandre excavated the “house” because a tourist attraction would soon be built there—the ambitious International Mary of Nazareth Center (with five buildings) opened within a year of the excavation announcement. One must find it highly coincidental that a house from the “time of Jesus” would be “discovered” precisely at the site of an imminent Christian tourist venue… It would be much less congenial if the ‘house’ were, say, that of an Ottoman peasant family! In short, Alexandre’s results sound to me like a set-up, like the excavator (and the Church) knew—even before she excavated—what she was going to find. Incidentally, this was the first house from the “time of Jesus” ever claimed at Nazareth in over a century of digging. I wonder if it’s also a coincidence that the claim came one year after publication of my book…

In 2012 Ms. Alexandre also claimed that she found pre-Jesus era coins in an old excavation at Nazareth, one she directed in 1997-98. Her scholarly report of this excavation finally appeared in 2012 and shows clear signs of ‘tampering’ with the evidence, to put it mildly. I devote a chapter to this Mary’s Well excavation in my second book, NazarethGate. Besides contradicting herself, the coins are mislabeled and so worn as to be unreadable. Finally, the channels in which they were found were constructed in Middle Roman times! Case closed.

The history of this excavation and its reports is also interesting. In 2006 I contacted Ms. Alexandre while researching my first book. 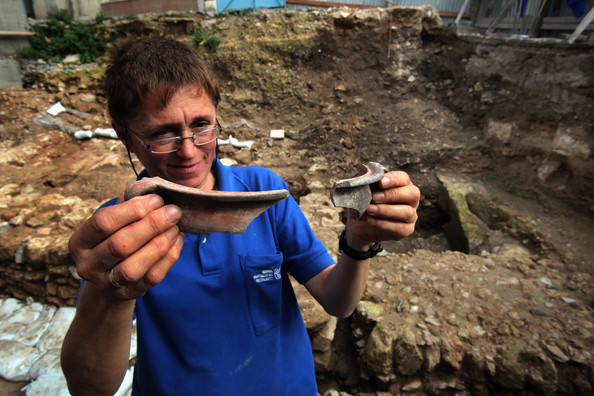 As luck would have it, at that time she emailed me the resumé of her excavation, the same resumé that she also sent to the Israeli government. In it she mentions no coins at all dating before Crusader times. How is it, then, that significant early evidence suddenly ‘appeared’ in this fifteen year old excavation? Did she change her mind? More likely, of course, is that she was not aware in 2006 of any early coins at Mary’s Well.

In yet another change of opinion, Ms. Alexandre has recently claimed that the coins in question date not to the time of Jesus—as claimed by some other scholars—but to Hellenistic times, that is, to well before the turn of the era. One wishes the establishment could make up it’s mind! It’s hard to keep track of all these changing revelations which, furthermore, took place largely in non-scholarly channels.

Any self-respecting person will find such shenanigans unseemly. It is disturbing that the tradition has moved along a trajectory of continual subterfuge regarding the material evidence from Nazareth. According to the latest information I have received, Ms. Alexandre now has placed an exact number on the alleged Hellenistic coins she “found”—ten. Thus, by degrees, this evidence (which I consider entirely mythical) becomes more and more “real.” Should Ms. Alexandre eventually publish a scholarly report which includes such bogus evidence, I will be quick to cry “foul”! [Alexandre did later publish a monograph on Mary’s Well in 2012. I thoroughly discredit it in NazarethGate, chp. 10.–RS, 7/13/19] My sentiment appeared a couple of years ago in an American Atheist article:

We should all look with great suspicion on new evidence [at Nazareth] ‘coming to light’ which conflicts with the evidentiary profile of the last hundred years, new evidence which astonishingly reopens the case for settlement in the time of Christ… Any claim of new, pre-70 CE evidence, should raise an alarum red flag. Such a claim tells us more about the persons making it than about Nazareth…” (American Atheist, Jan. 2009, p. 12.)

For the tradition the stakes couldn’t be higher. If word gets out that Nazareth came into being after the time of Jesus, then not only is Christianity’s central figure in jeopardy but so is Israel’s principal source of tourist revenue. It can be no coincidence that, over the last decade, closer and closer cooperation has emerged between tourism associations in Israel and well-heeled evangelical Christian groups in the West. Those gigantic forces have come together to fund multi-million dollar ventures in Israel, including the recent “Nazareth Village” resort (evoking the alleged town as it was in Jesus’ time), and the Mary of Nazareth Center mentioned above. The truth about Nazareth is as much a commercial issue as a religious one.

A British archaeologist, Ken Dark, is now excavating regularly in the Nazareth vicinity. Prof. Dark is an expert on the archaeology of Britain in Roman times. He has recently worked on some plots between Nazareth and Sepphoris, and also under the Sisters of Nazareth convent—just across the street from the Church of the Annunciation. I will soon be publishing reviews of Prof. Dark’s highly tendentious work which supports the New Testament—i.e., that the slope of Nazareth was, indeed, the location of a settlement at the ‘time of Jesus.’ Unfortunately for Prof. Dark, such a thesis can only be argued by inappropriately applying Judean datings to the Galilee, by persistently ignoring first-rate scholarly publications (such as those of Hans-Peter Kuhnen), and by grossly misinterpreting scholarly reports and material evidence in the field.

[Note: Since writing the above, my book NazarethGate has appeared (Dec. 2015). It examines in devastating detail the bogus “Jesus-era” claims of Alexandre, Dark, and many others.—R.S.]

It’s interesting that my search to understand Jesus has led to his complete evaporation. This was not what I expected. Furthermore, I was led to the archaeology of Nazareth—an anomalous element in the Jesus story which still, after two thousand years, demonstrates the vulnerability of the Jesus myth. “Nazareth,” of course, is a pawn in a much larger context. I now recognize, as do an increasing number of people, that Jesus was a myth from the start—indeed, a very impressive myth fabricated out of whole cloth.

There is, of course, nothing inherently wrong with mythmaking. Mankind has engaged in that fascinating pursuit since the dawn of history. What is reprehensible, however, is to delude people with intent and foreknowledge. First the evangelists, then the Church Fathers, and finally the Christian copyists created a false god. They insinuated a mythical Jesus into history, gave him a virgin mother, had him walk on water, multiply loaves, exorcise demons, raise people from the dead, and—most egregiously—forgive sins. Despite the Christian scriptures, however, no contemporary witnesses to Jesus in history. Furthermore, science knows no such thing as a virgin birth, no walking on water, no multiplication of loaves, exorcism of demons, nor raising from the dead. Finally, no greater betrayal of humanity exists than to delude a trusting person with the words “your sins are forgiven.” Yet Christianity makes that callous and empty promise every day in exchange for fealty.

At the beginning of this third Christian millennium the evidence is finally coming to light that the Christian edifice was laboriously and deliberately erected upon a colossal lie—“Jesus of Nazareth.” The lie that is Jesus has since been used by self-righteous popes, ministers, and prelates to awe, subdue, and terrorize believers and nonbelievers alike. It has perpetuated other lies: salvation, redemption, final judgment, heaven and hell… The entire Christian religion is a nexus of pretense, wishful thinking, and intimidation. It has caused untold misery and duped millions into believing that they are “saved.” Let’s hope that, through knowledge, people will gradually free themselves from the heavy psychological shackles that religion represents. Let’s likewise hope that people will apply reason and not superstition to the problems of life, large and small. Finally—as a “spiritual atheist”—I offer one more wish: Let’s hope that people will place their faith not in religion but in the indomitable spirit of man. We don’t need any higher power to guide us. Each of us has everything it takes to be wise and happy, namely, the marvelous ability to reason and to solve the ultimate questions of life.—R.S.