The thrust of Jesus mythicism is to establish that Jesus of Nazareth did not exist—he was an invented figure. Much ink is now being spilled demonstrating this and—even in the unlikely case that the question were settled by scholarship in the next decade or so—acceptance of Jesus mythicism by the general populace will probably require several more decades. 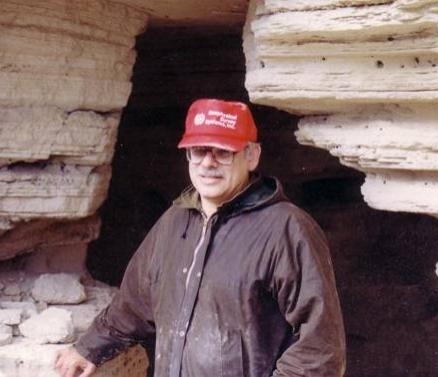 Eisenman at the mouth of Cave 4, Qumran.

However, showing that Jesus of Nazareth did not exist as an historical figure is not the end of the road. There are some, myself included, who strongly suspect that a human prophet was ultimately behind various Christian, Mandean, and Gnostic writings of late antiquity. I call this view semi-mythicism. Perhaps the prophet in question was John the Baptist. Perhaps he was the Teacher of Righteousness known from the Dead Sea Scriptures (DSS). Perhaps he was some combination of characters known and unknown to history. Robert Eisenman, an expert in the DSS as well as the Christian corpus, has probably done the most work in attempting to resolve the plethora of mis-identities in scripture. In any case, the prophet of whom I am writing certainly was not Jesus of Nazareth. In this post I’d like to begin an exploration into finding the “lost prophet” behind the Christian religion…

Before proceeding, a legitimate question must be confronted: What leads one to suspect that a human being inspired the religion we call “Christianity”? My answer rests on three criteria which I term internal coherence, dissimilarity, and impracticality.

A fairly large number of sayings found in the canonical gospels (4G) comprise a coherent worldview. In coming posts I will discuss and list some of those sayings which, by my tally, total roughly 150 (this includes the Gospel of Thomas and a few ancillary works). I find it entirely unconvincing that someone (or even a group of people) sat down and invented one pithy saying after another—as well as some of the most interesting and beautiful parables known to religion—and at the same time somehow produced a challenging and coherent philosophy of life. I call this the criterion of internal coherence.

Secondly, the “core” sayings are radically at odds with the tenets of both Judaism and Hellenism. They do not fit into existing models in the ancient world unless we venture as far east as India. Scholarship has noted parallels between Christianity and Greek cynicism, but the Greeks never endorsed the radical repudiation of the world evidenced in a body of Christian sayings. Judaism, too, has a rich wisdom tradition, but it never endorsed bridging the chasm between man and divine perfection. Thus, if anyone wishes to claim that these core Christian sayings were “invented,” s/he must consider that whoever invented them deliberately produced a philosophy out of step with his general environment. Furthermore, it was a most unpopular philosophy. The sayings I am referring to endorse humility, encratism (continence), non-violence/love of enemies, rejection of the “world,” and the gnostic quest. They propose an enormously demanding and uncompromising path which is odious to the common person, for they enjoin him or her to leave family, spouse, and the pleasures of the world. Such a philosophy corresponds neither to the Greek ideal nor to Jewish law and is hardly calculated to conquer the world! Who in the West could have, or would have, made this up? And why?

I do not accept the glib pronouncement that “Everything in the New Testament was said before,” particularly as regards what I consider the 22 core parables. Had these pithy stories existed before, their precedents could easily be traced. Parables like the fishnet (Th 8), the good Samaritan (Lk 10:30 f.), the entrusted money (Mt 25:14 f.), and the rich farmer (Th 3) are striking and unique. Most significantly, they reflect values not otherwise known to the West. They are quite new. This I call the criterion of dissimilarity.

Thirdly, I can’t imagine anyone “making up” these sayings for they have no practical value. Their purpose is internal and purely spiritual. There would be no advantage for anyone to invent sayings which enjoin humility, the search for gnosis, the need of forgiveness, and the like. This I call the criterion of impracticality.

I have thus come to the conclusion that there is a core within early Christian scripture, a fairly slight body of teaching which is coherent, dissimilar, and impractical. It is also profound. The existence of that core requires explanation: it did not drop fully formed from the sky. Nor, for the three reasons given above, was it invented. By elimination, then, that “core” required a human teacher. This is why I consider myself a “semi-mythicist”: one who does not believe Jesus of Nazareth ever existed, yet who also believes that some prophet taught a body of teaching embedded in Christian scripture. 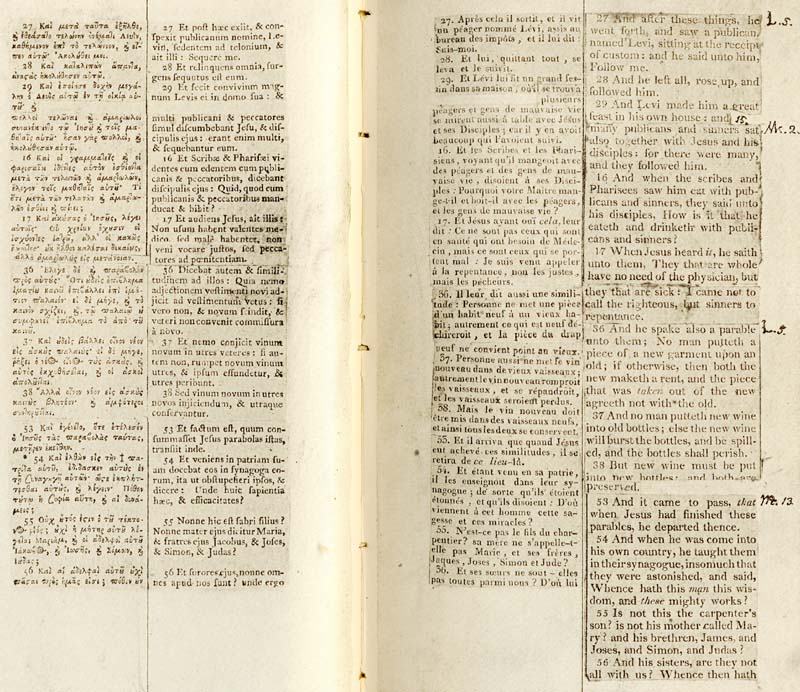 For a long time investigators have been trying to separate the authentic parts of Christian scripture from the inauthentic, perhaps ever since Thomas Jefferson took out his razor and excised most of the canonical gospels, salvaging selected passages in 1820 to produce The Jefferson Bible. New Testament scholars have done much the same thing, beginning most obviously with the recognition that the birth narratives in Matthew and Luke cannot both be correct (nor either independently, for that matter), that no slaughter of babies in Bethlehem really occurred, that the Romans never mandated a most impractical census by which all had to return to their home villages, etc., etc.

Gerd Lüdemann claimed that 95% of the NT was made up. For me, that figure is about right. One must wonder: if only about 5% of the gospels are authentic, is that small residue worth retrieving? For those who value quality over quantity, the answer must be a resounding “yes”! It should be noted that the putative 5% is not necessarily all there is—it’s just the part that survives in the New Testament. In other words, it is the tip of the iceberg. Once we have identified that 5%, we can look to heterodox scriptures for compatibilities which, heretofore, were overlooked or put to one side—or burned, yet whose echoes survive in secondary writings. In fact, there may be much more “authentic” material out there. It’s simply not where we’re used to (and trained to) look… 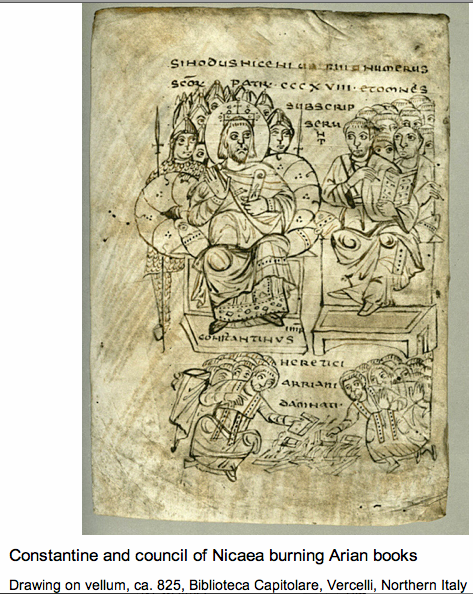 Thus, the search for authenticity at once narrows within the 4G themselves and at the same time widens outside the NT to encompass many lesser-known works. Already, the last century has witnessed the discovery of the Gospel of Thomas and other Gnostic Christian scriptures (to the discomfiture of the Tradition). But the net of Christian scholarship still has not extended to include the Mandean writings, nor to deal seriously with the plethora of unpublished scriptures residing in virtually inaccessible archives around the world (including those in the Vatican, Oxford, Chicago, and Israel). In the last several years I myself have identified a revolutionary Acts of Mark which portrays Mark as a disciple of John the Baptist. It remains mostly untranslated into any modern language though it’s been known for a half century. I’ve also come across a provocative Book of Gad the Seer and will be uploading available chapters to this website in future. Meanwhile, access to many private collections in libraries around the world (many owned by religious institutions) becomes more restrictive with the passage of time, as the paranoia of the Tradition escalates… Nevertheless, all these represent only a fraction of what’s out there to be “discovered.” Even after the enormously successful Christian book burnings in antiquity, enough material probably survives to more than make a strong case for an alternate (and very unorthodox) account of Christian origins.

Getting out the scalpel

To return to the gospels and the “5%”… The first great swath of material to go must be historical—the biography of Jesus, his miracles, and in general his “doings”—from the virgin birth to walking on water, raising up Lazarus, multiplying loaves for a crowd of 5,000, crucifixion under Pilate, bodily resurrection from the dead… This is the first step in recovering an authentic “core.”

Once we remove the grand biography of the god-man Jesus from the gospels, what remains are essentially the logia—the parables and sayings attributed to him. Here the Jesus Seminar (JS) wielded its collective scalpel a generation ago, bringing us a second step closer to an ‘authentic’ prophet (whom I will continue to call “Jesus” simply for convenience). The result? The JS identified a grand total of 91 “sayings” that it considered certainly (“red”) or probably (“pink”) went back to Jesus. This information is from The Five Gospels: What Did Jesus Really Say? (pp. 549-53). 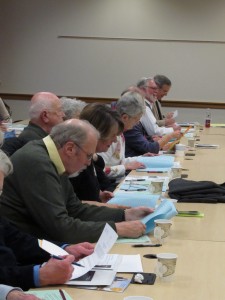 The Jesus Seminar at work.

91 sayings is not a great deal when we consider five gospels (4G + Thomas). J.D. Crossan has presented a total of 427 (non-repeating) sayings in his Sayings Parallels: A Workbook for the Jesus Tradition (Fortress, 1986). Thus, the JS concluded “authenticity” in about one-fifth of all the surviving sayings material.

My own analysis largely tallies with the JS. Of the 22 parables which I think “probably” or “certainly” go back to the prophet, the JS agreed 17 times—roughly 75%. That is only for the parables. We also have three other categories: “Aphorisms” (Crossan identifies 290 in all), “Dialogues” (81), and “Stories” (97). My review of these categories has yielded 150 sayings which I believe probably or certainly go back to “the prophet”—a little higher than the JS’s 91—that is, 35% vs. 21%.

In my opinion, it is these 150 core sayings which give enduring value to the Nazarene religion, later hijacked to form what we know of as Christianity. The core sayings are internally coherent, dissimilar to ancient schools of thought, and thoroughly impractical from a worldly standpoint. The last element, particularly, ensured that Nazoreanism would not be popular. The teachings communicated in the core sayings would simply have led proselytes into the desert and would have ensured one thing for the religion: a quick death. In fact there are signs that this was the case, for “Paul” brought a substantial collection of money for the “poor”—that is, for spiritual “saints” who just weren’t making it in the world.

How, then, did Christianity conquer the world? I answer in this way: the profound and authentic core body of teaching was subsequently yoked to two invented, yet powerful (and perfidious) elements: the god-man Jesus of Nazareth, and the doctrine of salvation known to scholarship as the Pauline kerygma. The “Jesus” of the gospels gave mankind a superhuman god-man calculated to awe and subdue. The Pauline kerygma (Gk. “proclamation”) basically gave mankind the right to take it easy and enjoy—because “Jesus” has already done the hard work for us. He’s redeemed us from our sins. So, presumably, as long as we believe in the kerygma, we can pretty much sin as much as we darn well please. If we believe, God will forgive. In sum, the combination of these three strains gave the Christian religion formidable “legs.”

Understanding the genesis of Christianity is, in my opinion, a question of understanding the elements briefly touched upon in the preceding paragraph: the existence of a core body of “Nazarene” teaching; the invention of “Jesus of Nazareth”; and the invention of the Pauline kerygma. The amalgamation of these three powerful elements produced the new, universal religion known as “Christianity.”