In the third post of this series I listed a number of “themes” which provide a contour of Nazarene (i.e., pre-Christian) theology. Those themes can be deduced from sayings attributed to “Jesus” in Christian scripture, both orthodox and heterodox, according to the criteria of dissimilarity, coherence, and impracticality. They betray a gnostic outlook wherein the goal of life is to seek and find hidden wisdom (gnosis). They delimit a body of teaching which endorses separation from “the world” and the adoption of a rigorous ethical code including humility, renunciation, and chastity. This, I would suggest, is the contour of the pre-Christian Nazarene theology as evidenced by the surviving scriptural record.

The scriptural record, however, betrays internal signs of having been much redacted both generally and specifically. The overall gnostic theology (see below) has been placed in the service of the Pauline kerygma, with innumerable consequences on specific pericopes and sayings. Over many decades of modern scholarly study, form criticism, redaction criticism, and many other “criticisms” have revealed that the canonical gospels (4G) are often composed of highly evolved material.

I have posited the existence of a “lost” prophet at the origins of Christianity (Posts 1-3 in this series). However, given the highly redacted nature of the texts, it is not reasonable to expect the ipsissima verba of the prophet in the “core” sayings and parables—about 150, according to my tally. Rather, they betray themes which are out of step with Judaism and Hellenism, as noted in the prior posts. They are, however, closely related to Buddhism in content. Because this core material betrays an underlying idiosyncratic personality, vocabulary, and style not found elsewhere (not even in Buddhist scripture), I have concluded that the Christian record contains not only quasi-Buddhist teachings, but the imprint of an original western prophet not represented in the Indian Buddhist tradition.

The question arises: Are the ipsissima verba of the prophet to be found in any of the material that has come down to us? Obviously, we can never know the answer for sure, but the theoretical response is: “Very possibly.” In this regard, we might look especially at shorter parables, such as The Mustard Seed, The Leaven, The Treasure, The Pearl, The Fishnet (Crossan 3-7), etc. Consider, for example, the Parable of the Pearl (Mt 13:45-46):

Again, the kingdom of heaven is like a merchant in search of fine pearls who,
on finding one pearl of great value, went and sold all that he had and bought it.

We have here a very short story which, in its present form, is consummately terse. What has come down to us is the essence of a story which could easily be elaborated to considerable length. It could be that “Jesus” (or whatever he was called) spoke the above words. It could also be—and this is probably more likely—that the person recalling the story (or the redactor writing it down) transmitted simply the bare bones of the story, its intent. Incidentally, the particular teaching found in the above parable mirrors that of both the preceding and following parables (The Treasure, and The Fishnet—Mt 13:44; 47-48), so that we have three parables in a row with the same fundamental teaching.1

Thus, it is hardly reasonable to look for a verbatim account in any sayings attributed to Jesus. It is more reasonable to suppose that what has been transmitted is the intent, meaning, or teaching of a story as understood by a tradent. In the Christian scriptures we have, at best, the essential teachings of the lost prophet at second (or third) hand.

The Gospel of Thomas is particularly instructive. Here, “Jesus” hardly ever represents a prophet at all: he speaks for “the Truth.” Over and over, the Gospel of Thomas begins its logia with “Jesus said…” Nevertheless, the compiler of this text had little interest in what any human prophet said when he wrote, for example: Jesus said, “Become passersby” (L. 42). Rather, The Truth (Sophia, Wisdom, Manda d’Hayye) says, “Become passersby”. Here we have a further development of the tradition where “Jesus” is disembodied Truth. The human prophet has been left far behind and we have only the teaching, reduced to its most pithy form.

The Parable of the Ten Maidens

Most parables are metaphorical and, by definition, require interpretation. Thus, in the above parable of The Pearl, the merchant is enjoined to give up all that he has for the pearl of great value. Interpreted, the individual is exhorted to give up everything in order to attain gnosis (for traditionalists, to attain faith). 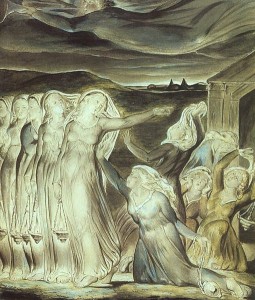 The Wise and Foolish Maidens
by William Blake

Occasionally, however, we encounter relatively lengthy parables with elements which defy common sense interpretations. This is an indication that the tradition has gone one step further in development and that we are no longer dealing with metaphors but with symbols—terms with hidden meanings which were known to the author but which may not even be known to the reader. This supposes a considerable developmental prehistory. Consider, for example, the Parable of the Ten Maidens (Mt 25:1-13):


“Then the kingdom of heaven shall be compared to ten maidens who took their lamps and went to meet the bridegroom. /2/ Five of them were foolish, and five were wise. /3/ For when the foolish took their lamps, they took no oil with them; /4/ but the wise took flasks of oil with their lamps. /5/ As the bridegroom was delayed, they all slumbered and slept. /6/ But at midnight there was a cry, ‘Behold, the bridegroom! Come out to meet him.’ /7/ Then all those maidens rose and trimmed their lamps. /8/ And the foolish said to the wise, ‘Give us some of your oil, for our lamps are going out.’ /9/ But the wise replied, ‘Perhaps there will not be enough for us and for you; go rather to the dealers and buy for yourselves.’ /10/ And while they went to buy, the bridegroom came, and those who were ready went in with him to the marriage feast; and the door was shut. /11/ Afterward the other maidens came also, saying, ‘Lord, lord, open to us.’ /12/ But he replied, ‘Truly, I say to you, I do not know you.’ /13/ Watch therefore, for you know neither the day nor the hour.”

Commentators have long been stymied by the unusual and even strange setting of this parable. A bridegroom meets with maidens at “midnight”; some maidens are foolish because they have insufficient “oil” in their lamps; others who are well provisioned go in with the bridegroom to the “marriage feast”; the foolish maidens go to buy oil, though it is midnight and no “dealers” would then be available; they are subsequently denied admission because the groom does not “know” them; the listener is enjoined “to watch.”

There is no precedent in Judaism for the above scenario, as many commentators have acknowledged. We must, then, suspect that the meaning of the parable resides neither on a literal nor even metaphorical level, but on a symbolic level. The symbolism utilized includes: midnight, bridegroom, oil, lamp, marriage feast, sleeping, watching, and “know.” The parable is now an allegory.

Such florid symbolism indicates a long developmental prehistory, with multiple symbols placed in a context which is only meaningful to a person ‘in the know.’ It is inconceivable that such a parable could have been related by a prophet to a general or casual audience, for its understanding requires knowledge of the correct interpretation of the numerous symbols. What we have here, then, is a hidden or “secret” teaching which already reflects a fairly advanced and well developed esoteric tradition.2

The above nexus of symbols is only understandable from a gnostic-encratite perspective. “Encratism” (from Gk. egkrateia) is “moderation in sensual pleasures, self-control, Lat. continentia…abstinence from or in a thing.” The word derives from en kratos, “in strength,” from which the Greeks also derived egkratês, “holding fast, stout, strong,” i.e., “not yielding” (Liddell-Scott).

In a religious context, encratism is well attested through a plethora of early Christian texts where chastity is an aspect of holiness and often a prerequisite for salvation. Most notable may be the non-canonical Acts of various apostles (Thomas, Andrew, John, Paul, Peter, etc.) which were particularly popular in antiquity. Two Syriac “Epistles to Virgins” attributed to Clement of Rome also survive. Encratism was apparently a pan-Christian phenomenon affecting both East and West, Hebrew and Hellenist, Gnostic and Catholic. The gospels of Thomas and of Philip are both heavily encratite, as are also many other tractates from the Nag Hammadi corpus.3 Finally, I might mention that Origen and other Christians actually castrated themselves ‘for the kingdom of heaven,’ taking Mt 19:11-12 literally.

Understandably, encratism proved too difficult for the masses and the Church Fathers eventually argued that it was desirable but not mandatory, and then merely optional. Even in Paul we read the conciliatory dictum that “it is better to marry than to burn” (1 Cor 7:9), while in 1 Thess 4:1-8 marriage is tolerated if engaged “not in passion of lust.”

What is little appreciated, however, is that encratite behavior rests upon a belief system which is inveterately gnostic.4 The Great Church eventually recognized this and (falsely) dubbed Tatian ‘the founder of the sect of the Encratites’ (Eusebius, Jerome), while Irenaeus supposed that ‘the Encratites’ proceeded from Saturninus and Marcion. However, encratite spirituality predated all those heretics and is also demonstrably found in the New Testament itself.

Without an understanding of its underlying belief system, encratism is little more than a bizarre maladjustment to society, an overweening asceticism with no rationale. However, once we enter into the gnostic worldview, it assumes unsuspected layers of meaning.

The gnostic essentially believes that the ultimate purpose of life is to attain understanding, gnosis. That task, however, is not possible as along as any other goal in life rules the heart and mind of man—most commonly, “pleasure.” From the gnostic perspective, pleasure in all its forms seduces man (and woman) away from the true goal—understanding. “Pleasure” is used broadly here to include sex, power, money, reputation… Only gnosis, on the other hand, confers enduring happiness, fulfillment, ‘salvation.’ This is the gnostic perspective which, incidentally, is readily found in the “core” sayings attributed to Jesus. Just as an arrow cannot be aimed at two targets, so each person must choose between pleasure and understanding. This is the gnostic krisis (“judgment”), modified by the Paulines into a krisis regarding belief in Jesus.

In light of the above, encratism (continence, chastity) is not an end in itself but is a by-product of the gnostic quest. Encratism and gnosticism go hand-in-hand. This important point is not generally appreciated by Christian scholarship.5

1. There are Buddhist parallels to this teaching. See “Parables of Accomplishment” (Chp. 49) of my Buddhist and Christian Parallels.

2. Such esoteric meaning together with symbolism is found also in Jewish scripture, e.g. 2 Sam 23:13–17. For discussion see my The Natsarene and Hidden Gnosis p. 8 (PDF).

3. Besides the gospels of Thomas and Philip, other strongly encratite works among the Nag Hammadi texts are: The Exegesis of the Soul, Book of Thomas the Contender, Dialog of the Savior, and Testimony of Truth.

4. The sexual asceticism of the Dead Sea Sect must also be seen in the light of gnosticism, and provides a sectarian Jewish precursor to Christian encratite spirituality.

5. Thus, C. Richardson wrote an article entitled “The Gospel of Thomas: Gnostic or encratite?” (Orientalia Christiana Analecta No. 195: 1973.) The choice between gnosticism and encratism is a false choice.