We have seen that the spirituality which preceded and led up to Christianity (what I call “Natsarene” spirituality) was marked by two broad characteristics—gnosticism and encratism. The former has reference to the goal of finding gnosis. The latter characterizes the way to the goal: through continence and a general repudiation of pleasure. The gnostic considered that no one can “serve two masters,” and recognized that a fundamental decision occurs in life, one between pleasure and understanding. We have looked at the Parable of the Ten Maidens (Mt 25:1-14), touched upon Secret Mark, and noted the broad popularity of encratism in early Christianity, evident in the non-canonical Acts of the Apostles and in many gnostic writings from the Nag Hammadi Library. One hallmark of encratism is that sexual imagery is used to convey gnostic events and dynamics: the wedding feast, the bridegroom, the kiss, etc. This symbolism baffled unsympathetic outsiders in the Church who were happy to conclude that gnostics were degenerate libertines.

The Therapeutae, famously described by Philo in De Vita Contemplativa (and nowhere else) share many elements of the Natsarene spirituality that I’ve described. Philo distinguishes the Therapeutae from the Essenes by saying that while the Essenes are “practical” the Therapeutae are “contemplative.” Philo speculates that they may be called “Therapeutae” due to their healing powers, but he is emphatic that those powers are “to heal souls” while the Essenes were known as healers of the body. Thus he makes a distinction between two groups of “healers.”

“Watching” and “being awake”

Philo notes that “the Therapeutic sect of mankind, being continually taught to see without interruption, may well aim at obtaining a sight of the living God” (11, emphasis added). “To see without interruption” = “be awake, watchful.” This is no casual allusion but certainly has deep roots in religion both East and West, as will presently be shown. To obtain “a sight of the living God” is the Gnostic ascent. Note that in Judaism, ever since the time of the early prophets, that sight has been anathematized and considered fatal to any human being. This is one indication of how Judaism quite early repudiated gnosticism and the gnostic ascent.

In section (6) of his treatment of the Therapeutae, Philo characterizes demigods as “ridiculous.” For how, he goes on, “can the same man be both mortal and immortal?” This seems to be a swipe at those Enochian Watchers who had fallen (Gen 6:1-8; 1 Enoch 6-7). Philo writes of demigods who are… 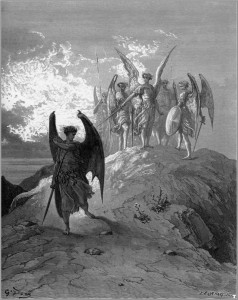 full of youthful intemperance… as if they, being madly in love with mortal women, had connected themselves with them, while we know gods to be free from all participation in and from all influence of passion, and completely happy.

Here we witness Philo’s encratite leanings, in that the gods are “free from all participation in and from all influence of passion, and completely happy.” So, being free from passion = being divine = “watching.” When the angelic Watchers “fell” they stopped being “watchful/awake,” they engaged in sexual intercourse with women, and they spawned the odious giants (nephilim) who then terrorized the world:

These (giants) consumed the produce of all the people until the people detested feeding them. So the giants turned against (the people) in order to eat them. Then they began to sin against the birds, wild beasts, reptiles, and fish [the vegetarian ideal]. Then their flesh was devoured the one by the other, and they drank blood. And then the earth brought forth an accusation against the oppressors. (1 Enoch 7)

Prior posts in this series have explored the Semitic root n-ts-r with its semantic fields of “watch, guard, keep [secret]” (BDB 665-66). The idea of “watching” is often associated with “staying awake” (cf. Mk 13:33-37; 14:37-41, below). This concept remarkably echoes Buddhism—Bodhi (from which the epithet Buddha) means “unsleeping, understanding, awake”:

Derived from the root budh, ‘to wake,’ [Buddha] means one who knows in the sense of having become one with the highest objects of knowledge, Supreme Truth. (C. Humphreys, Popular Dictionary of Buddhism 48-49.)

“Here someone—in things never heard before—understands by himself the truth and therein attains omniscience and mastery in the powers. Such a one is called a universal Awakened One [Buddha], an Enlightened One.” (Puggalapannatti 29)

Buddhism is the quintessential gnostic-encratite religion. It preceded Christianity by over five centuries. In Buddhism the goal is to achieve understanding of life while renouncing pleasure. Buddhism reached the West most obviously in the mid third century BCE, when the Indian emperor Ashoka the Great sent missionaries (no doubt with considerable pomp) to Emperor Ptolemy II in Alexandria as well as to other Western cities. Ptolemy II, incidentally, was a great patron of the Alexandria library. It is virtually certain that Buddhist sutras were in that library and available to cognoscenti from c. 250 BCE onwards. This significant communication between East and West followed the composition of the Septuagint yet preceded the writing of the Dead Sea Scriptures and the incipience of the Therapeutae.

In the New Testament, of course, we also find eloquent evidence for the theology of “watching” in the sense of being “unsleeping, awake, understanding” (Bodhi). We have looked at the Parable of the Ten Maidens (Mt 25:1 ff)—those maidens who had sufficient “oil” in their lamps were able to watch. Thus, they were present and awake (= alert, knowing, full of gnosis) when the “bridegroom” arrived at the time least expected, that is, at midnight: 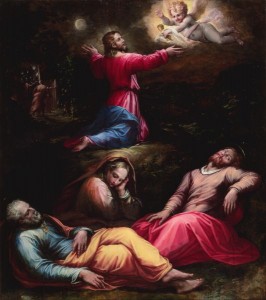 The Garden of Gethsemane
by Vasari

“Watch therefore, for you do not know when the master of the house will come—in the evening, or at midnight, or at cockcrow, or in the morning—lest he come suddenly and find you asleep. And what I say to you I say to all: Watch.” (Mk 13:35-37).

And they went to a place which was called Gethsemane; and he said to his disciples, “Sit here, while I pray.”
And he took with him Peter and James and John, and began to be greatly distressed and troubled. And he said to them, “My soul is very sorrowful, even to death; remain here, and keep awake.”
…And he came and found them sleeping, and he said to Peter, “Simon, are you asleep? Could you not keep awake one hour? Watch and pray that you may not enter into temptation; the spirit indeed is willing, but the flesh is weak.”
And again he went away and prayed, saying the same words.
And again he came and found them sleeping, for their eyes were very heavy; and they did not know what to answer him.
And he came the third time, and said to them, “Are you still sleeping and taking your rest?”… (Mk 14:32-42, selected)

It is evident that the above is an enactment through drama of a theological statement: one must watch, be awake. In gnostic terms, one must “have understanding, gnosis.” However, the Pauline Christians who constructed this fictive scene obscured the original gnostic message which, in fact, lies at the heart of Natsarene religion. They reduced the element of “watching” and of possessing gnosis to the banal element of being physically awake/asleep. Originally, being awake was a metaphor for attaining something deeper, namely, gnosis. In the transition from Nazoreanism to Paulinism, however, the deeper gnostic element has been lost—deliberately.