Ephrathah and ʻcrossing overʼ

In Jewish scripture, Bethlehem is sometimes equated with Ephrath/Ephrathah (Gen 35:19; 48:7; Ruth 4:11; Mic 5:2). Elsewhere, the latter is the “father” of Bethlehem (1 Chr 4:4). Both ʻplacesʼ were not material settlements in Judah, Benjamin, or Ephraim, but mythical locales in pre-Israelite religion. Beit-Lahmu (Bethlehem) was the home of the Lahmu divinities, servants of the great god of hidden wisdom who guarded the ʻgateʼ of his house. Hidden wisdom (gnosis) had long been symbolized by fresh water emerging from within and under the earth. Thus, it is no surprise that the Bethlehem known to Jewish scribes was noted for a well with special water sought out by David himself, as already cited (2 Sam 23:13-17).

The etymology of Ephrath (אפרת) is of some significance. Its root a/e-p-r (אפר) corresponds to the Babylonian-Assyrian ebêru (אבר) with the common exchange of labials beth and pe. Ebêru means “reach the other side, go across, through, or over.”31 This meaning conforms well to the ʻgate to gnosisʼ that we have been discussing. The Hebrew root for “pass over, through, or pass on” is closely related: עבר (‘br, with exchange of the gutterals ayin and aleph, also common).32 The Mesopotamian e-b-r and Hebrew ‘-b-r correspond in meaning and have yielded e-p-r (—> Ephrath).

The nominal form of Hebrew eber (ayin-beth-resh) signifies ʻthe other side,ʼ33 the place one reaches when one has ʻcrossed over.ʼ In a gnostic context this is the place of enlightenment, rest, and immortality. Here, then, must be the root meaning of the place Ephrath. It is the land of salvation on ʻthe other side,ʼ to which Beit-Lahmu (Bethlehem) is the all-important gate of entry. 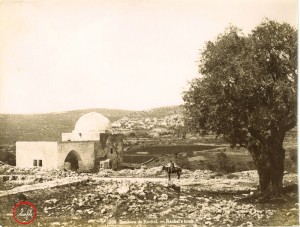 A gnostic and metaphorical interpretation of the imaginary Bethlehem and Ephrath/Ephrathah helps us make sense of the words “on the way to Ephrath” (and similar locutions) often employed by the Jewish scribe in conjunction with Bethlehem. The phrase occurs four times in the book of Genesis, always in association with the death and burial of Rachel:

All this insistence on the proximity of Bethlehem and Ephrath reveals an unsuspected poignancy when read from a symbolic and gnostic perspective. Rachel died while “still some distance to go to Ephrath.” Interpreted spiritually, this means she had not quite reached ʻthe land of salvationʼ—a condition generally applicable to humans, whose lives indeed usually end with some measure of disappointment.

The blessing of the Bethlehemites upon Boaz, in the book of Ruth, now also receives an added dimension: “May you produce children in Ephrathah” they all wish in unison (Ruth 4:11). No greater blessing, indeed, could be wished upon a future parent, than that all his children be in the land of immortality.

We have seen that the Hebrew root ‘-b-r (here vocalized for convenience as eber) is linguistically related to Ephrath and means “pass over, through, or pass on.” Eber denotes the movement of people from one place to another, but particularly over or through water.34 One immediately thinks of the Hebrew exodus from Egypt, and of their passage across the Jordan. Amazingly, the name “Hebrew” (עברי) itself derives from this very root.35 This is further attestation that, in the earliest stage of its formation—a stage which took place in the gnostic-imbued region of Midian36—the Hebrews referred to themselves as those who ʻcrossed over.’

We can now add a fourth clue to the above. In Jewish scripture, the body of water through which the Exodus occurs is Yam Suf (ים סוף), usually translated “Red Sea.” However, the phrase literally means “Sea of Reeds,” tentatively identified with a much smaller inlet of water nearer to Mediterranean coast, in the land of Goshen and east of the Nile delta. Suf commonly means “to come to an end, cease” (BDB 5486). According to this interpretation, Yam Suf signifies “The Sea of the Ending.” The meaning can only be gnostic—it is the barrier between this world and the transcendent world. In other words, the early Israelites crossed the figurative border marking the cessation of ignorance and the entrance into enlightenment, ʻthe land of salvationʼ—Ephrath, the original ʻpromised land.ʼ38 The early Israelites of the time of Moses were gnostic. 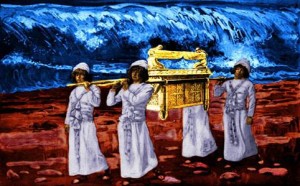 After the Exodus, the gnostic meaning was lost. ‘Crossing’ was associated with the River Jordan and ‘crossing over’ with attaining the promised land. Henceforth gnosis is forgotten and even repudiated. The Israelites are now God’s ‘chosen people,’ and the land west of the Jordan is their chosen ‘holy land.’ Crossing the Jordan becomes central to the new religion. The Jordan is crossed literally in Jewish scriptures, sometimes literally and figuratively in the Pseudepigrapha, and metaphorically in Mandean scriptures. Joshua (= “Jesus”), Mosesʼ lieutenant, crosses the river with the Israelites while “the priests who bore the ark of the covenant of Yahweh stood on dry ground in the middle of the Jordan” (Jos 3:17). No clearer image is possible of Yahweh metaphorically dominating what was thoroughly gnostic territory: the middle of the river of gnosis.

In the older religion, the gnostic is the one who crosses the flood, the Sea of Reeds, and the river of gnosis with impunity. He is the ‘Natsarene’ (the one who “watches” and “preserves secrets”). When we consider that water was a symbol of gnosis as far back as Neolithic times,39 then ʻpassing across (or through) the watersʼ becomes a metaphor for attaining enlightenment. Dipping into water is dipping into wisdom. This is the origin of the rite of baptism.

Crossing a body of water is a very ancient metaphor for the human being who seeks to understand his/her material limitations and to transcend them. In the Hebrew stories we can still detect the gnostic skeleton in the story of the flood: water (wisdom), under lunar influence, crushes those who have not befriended it—those who do not have secret knowledge. They attempt to cross over but are unable. However, the Natsarene—like Noah, Moses, and Joshua/Jesus—understands the secret ways of the divine and crosses the barrier unscathed. 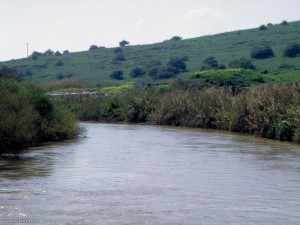 38. In Mandean scripture Sufath is the land beyond, located in the underworld of darkness. See M. Lidzbarski:24 n.2.

39. Water from the ground gave life to men, animals, and plants. The source of the underground waters (the subterranean abzu) was the home of the divine, the place of unchanging wisdom, the location of the afterlife, and the resting place of moon and sun.