Note: Bibliography is at the end of this series of posts.

Summary. On 14 August 1962, a promising archaeological discovery in Caesarea Maritima provided a breakthrough regarding the Galilean town of Nazareth, a village whose early existence is unknown in non-Christian sources. This article explores the remarkable circumstances which ensured that, from a small marble fragment containing about a dozen letters, the Nazarene’s hometown was “proven” to be in existence from the first century of our era—according to some conservative Christian scholars. However, a series of coincidences and anomalies attending this discovery occasion suspicion, including the fact that the Christian archaeologist-discoverer of the critical fragment had a past history of archaeological fraud.

In 1962, during the excavations at Caesarea in Palestine, Christian archaeology made a signal discovery: the sands of Caesarea offered up two fragments of a Hebrew inscription concerning the twenty-four priestly families or “courses” (1 Chr 24:7-18),1 naming the villages in Galilee where each family migrated after the Bar Kochba Revolt (135 CE) and after the dispersion of the Hebrew people. One of the fragments contained the word “Nazareth” (נצרת).

Dating to the third or fourth centuries of our era—according to paleographic analysis2—this discovery threatened to deliver a body blow to those scholars who, relying upon the stunning silence of the non-Christian texts, denied the existence of Nazareth in the pre-Constantinian centuries. Charles Guignebert wrote:

The scholar will certainly consider this rather unsettling possibility: no ancient text, neither pagan nor Jewish, mentions Nazareth. As regards the pagan writings, we can easily excuse their omission—for if the Galilean village played no important role in the two Jewish revolts, and if it did not attract Greek nor Roman inhabitants, then the obscurity of the village should not surprise us. It is different with the Jewish writings. We encounter the name of Nazareth neither in the Bible, nor in the rabbinic literature, nor in the writings of Josephus who is very interested in the Galilee and who enumerates a large number of towns and villages in the region.
Though it’s effect can be somewhat mollified, this universal silence cannot be completely ignored. Of course, mythicists have made the most of this in order to claim that the existence of Nazareth at the time of Jesus’ birth is nothing but a fiction. [C. Guignebert, Jésus, Paris, 1933.] 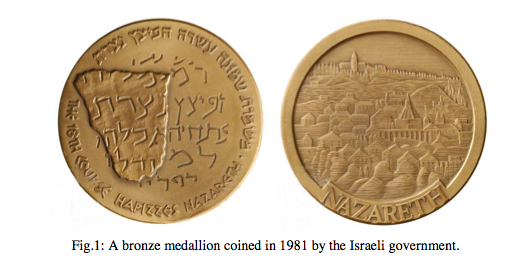 The same year as the discovery, the first article was published in the Israel Exploration Journal by M. Avi-Yonah, professor of archaeology at the University of Jerusalem and director of the excavation in Caesarea: 3

In the course of excavations undertaken at Caesarea by the Department of Archaeology of the Hebrew University, with the assistance of the Southern Baptist Theological Seminary, Louisville, Kentucky, and the Department for the Improvement of the Landscape and Restoration of Historic Sites of the Prime Minister’s Office, fragments of a Hebrew inscription were found. Because of their exceptional interest it has been decided to bring them to wider notice in advance of the fuller publication.

Fragment A. Slab of dark-grey marble, 153 by 124 mm. and 24 mm. thick. It contains four lines, broken off at both ends. The letters are 23-25 mm. high in line 1-2, 16-20 mm. high in lines 3-4 (Pl. 13 A). The reading, which presents no difficulty, is:
..מליח/ .._צרת/..אכלה../ ..גדל..
The fragment was found in area D of the excavations, [Ed. note 1] in a trench 5 m. wide across an elongated elevation parallel to the sea-shore and in the vicinity of the synagogue area. The material from sector D IV, where the fragment was found, was mainly Hellenistic, but included some traces of Late Roman and Byzantine.

Fragment B. Greyish marble, 145 by 140 mm. 24 mm. thick. Three beginnings of lines at the left, each 20 mm. high; margin 120 mm. wide to the right (Pl 13 B). The three lines begin with the same letters:..מ../ משׁ../ מ&#64298
Fragment B was found in area F, 70 m. south of area D. It was found reused in the marble pavement of a Late Byzantine room; among the other paving stones was part of a synagogue chancel screen, showing an ehtrog and a lulab.4
A third fragment, picked up on the surface at Caesarea, reads: 5

It seems that the three fragments formed part of one and the same marble slab, inscribed with a list of the priestly courses (1 Chron. 25:7-18) in their order, together with their surnames and the name of the locality to which they had moved after the destruction of the Second Temple. A fragment of a similar inscription was found at Ascalon: משׁ&#1502ר… / משׁ&#1502ר שׁ… / משׁ&#1502ר א…, proving the prevalence of this custom of commemorating the courses in the Palestinian synagogues. We can therefore complete the Caesarea fragments thus:

1. 1 Chr 24:7 ff.: “The first lot fell to Johoiarib, the second to Jedaiah, /8/ the third to Harim, the fourth to Seorim, /9/ the fifth to Malchijah, the sixth to Mijamin, /10/ the seventh to Hakkoz, the eighth to Abijah, /11/ the ninth to Jeshua, the tenth to Shecaniah, /12/ the eleventh to Eliashib, the twelfth to Jakim, /13/ the thirteenth to Huppah, the fourteenth to Jeshebeab, /14/ the fifteenth to Bilgah, the sixteenth to Immer, /15/ the seventeenth to Hezir, the eighteenth to Happizzez, /16/ the nineteenth to Pethahiah, the twentieth to Jehezkel, /17/ the twenty-first to Jachin, the twenty-second to Gamul, /18/the twenty-third to Delaiah, the twenty-fourth to Maaziah.”

2. Prof. Avigad proposed this dating, subsequently adopted also by Avi-Yonah. It has been recently contested by Uzi Leibner (2009, p. 176) who dates the inscription between the fourth and the seventh centuries. Leibner writes: The inscription was dated by Avi-Yonah to the third-fourth centuries on the basis of paleographic considerations. These parameters, however, are of doubtful value when it comes to stone engraving (Naveh 1978:5).”

4. The ethrog is a variety of citron. The lulab is the branch of the date palm. These make up two of the four “wise species” which also include the myrtle and willow used in the Jewish feast of Tabernacles (Sukkot).

Ed. note 1. Avi-Yonah adds a footnote at this point: “Prof. J. Vardaman was in charge of this section.”—R.S.

5. The fragment was already lost by the time Avi-Yonah published his first article in 1962! The archaeologist has the following note on this fragment C in his report: “A photograph was published by S. Talmon: The Calendar-Reckoning of the Sect from the Judaean Desert, Scripta Hierosolymitana 4 (1958), p. 171; a drawing in B. Mazar et al., ed.: Views of the Biblical World, IV, Jerusalem, 1961, p. 257.” Fragment C (the largest of the three) is attested in no site report and its exact provenance is unknown (found “on the surface”), though it ostensibly came from “field O,” the same general area subsequently excavated by Avi-Yonah and Vardaman. In the literature, all that witnesses to the physical object is a casual photo (probably taken by A. Wegman–see Govaars 2009:27 ff.).—R.S.