Translated and edited by René Salm

Note: This post includes information obtained from new photographs of the Ceasarea inscription fragments taken in June 2013 in the Ralli Museum, Caesarea.

Having analyzed the ‘external’ circumstances which shed suspicion on the authenticity of fragment A of the Caesarea inscription (in posts 1-6 of my article, Nazareth, the Caesarea inscription, and the hand of God), it may be useful to consider relevant ‘internal’ factors which support the argument for inauthenticity. It behooves the investigator to determine if the three fragments even form part of the same plaque—a conclusion which scholars have never seriously questioned. 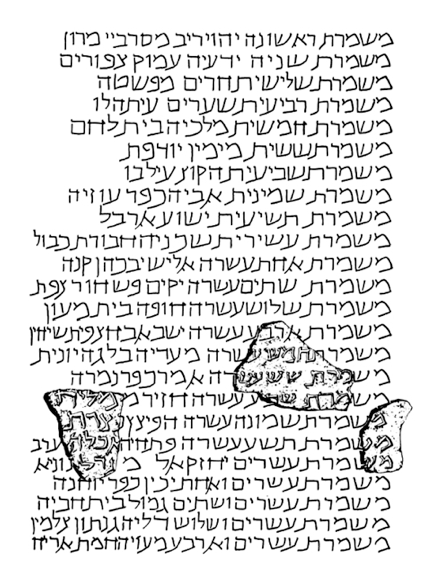 The Caesarea inscription as reconstructed by Avi-Yonah.
Fragment C (top) is lost. Fragments A and B supposedly begin and end the same lines of text.

In regards to fragments A and B found at Caesarea in 1962, Avi-Yonah wrote:

Although at present the two fragments differ in color, and in spite of the fact that they were found at some distance from each other, it seems that both formed part of one and the same inscription, and of the same marble tablet. It is, of course, possible that the text, which we shall discuss below, was divided in two separate slabs; but this possibility seems remote. That both fragments as found came from one original inscription follows from the equal size of the letters in the two fragments, the identity of their shapes and the equal distances between the lines. The presumed length of the text does not oblige us to assume that there were two different tablets. (The Teacher’s Yoke, 1962:47)

Regarding the lost fragment C:

One further fragment of this inscription was picked up some years ago at Caesarea; its photograph was published by S. Talmon. Unfortunately, this fragment has disappeared since and we cannot, therefore, check it with the others. (Ibid. p. 48) 1

Now, “the equal size of the letters in the two fragments, the identity of their shapes and the equal distances between the lines” would lead one to suppose that fragments A and B belong to the same inscription, “although at present the two fragments differ in color, and in spite of the fact that they were found at some distance from each other,” while fragment C supposedly also belongs to the selfsame inscription—though its disappearance renders direct physical comparison with the other fragments impossible. Given this disparate nexus of circumstances, Avi-Yonah chose not only to assemble the three fragments into a visual ‘reconstruction’ (based on the work of Samuel Klein), but also to propose that the three fragments came from a single plaque of marble, one commonly known as the “Caesarea inscription.” 2

Given the available evidence now at our disposition—physical, written, and photographic—it is possible to compare the three fragments ostensibly found in Caesarea in a more scientific manner than has occurred before, in order to verify the correctness of the commonly held view that these three fragments were part of a single marble plaque.

According to the dimensions of fragments A and B as published by Avi-Yonah (153 x 124 mm and 145 x 140 mm respectively) it is possible to precisely compare the vertical dimensions of the two fragments, yielding a ratio of 1.06 (153:145). This ratio has now been reconfirmed by new photographs of the fragments taken this summer at the Ralli museum in Caesarea, where fragments A and B are preserved.

A grid can be constructed with horizontal lines spaced 20 mm apart—this is the exact spacing between the lines on fragment B (see figures 1 and 2 below). When such a grid is superimposed on the fragments, a major problem immediately becomes evident: the gross incompatibility of line spacing between fragment A and the other two fragments.

We have, unfortunately, only a single photo of fragment C, a photo without a measurement stick. Therefore, the precise dimensions of that lost fragment are unknown. In order to include fragment C in the argument it was necessary for me to construct not one but two grids. In one grid (Figure 1) the letters of fragment C are scaled as closely as possible to fragment A. In the second grid (Figure 2) the letters of fragment C are scaled to those on fragment B. I have used the letter mem as the common scaling feature, for that letter occurs in all three fragments. 3 This generalized scaling can, of course, only be an approximation of the exact dimensions of fragment C. However, anyone who proposes that fragment C belonged to the same plaque as fragments A and B must, perforce, accept that the letters on those fragments will be approximately the same size. 4

Therefore, if we scale the central mem of fragment C with the available mem in fragment A, the proportions in Figure 1 result: 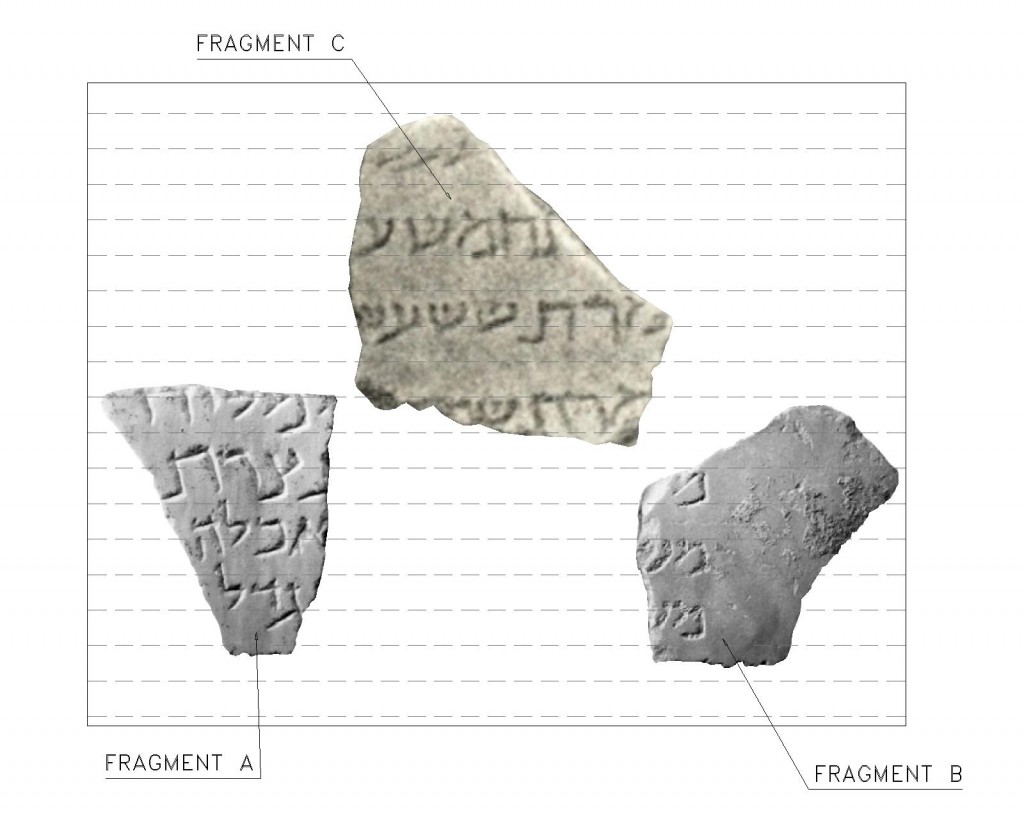 Fig. 1. Fragment C scaled according to the lettering (mem) of fragment A. The horizontal lines are 20mm apart.

Certain observations regarding line spacing are now immediately apparent. Comparing fragments A and B, we have always been able to note that the line spacing in B is about twice as great as that in A (20 mm vs. ca. 10 mm). 5 According to Figure 1, fragment A is even less compatible with fragment C in this respect.

We can summarize the above observations in the form of symbols (cd = character dimension; ls = line spacing). In Figure 1, where the mems of fragments A and C are of identical vertical height, the following results obtain: 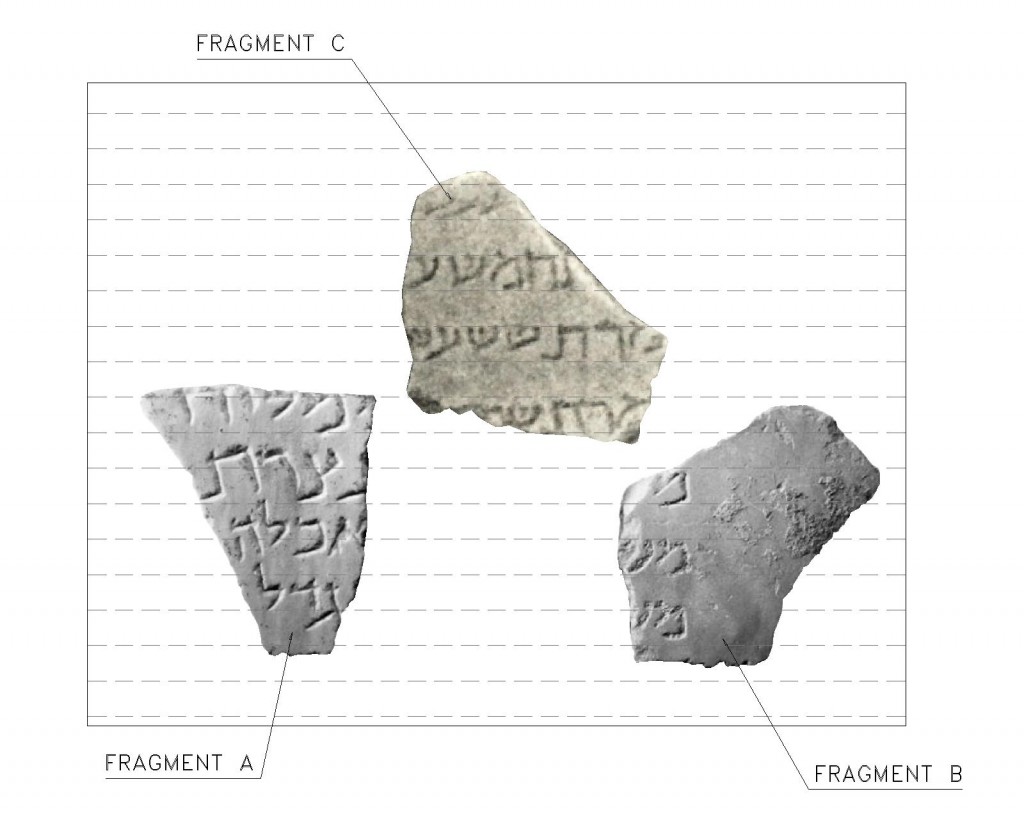 Fig. 2. Fragment C scaled according to the lettering (mem) of fragment B. The horizontal lines are 20mm apart.[/caption]

When we summarize Figure 2 in the form of symbols, the following results obtain:

In only one of the above six cases are two fragments tolerably compatible: in Figure 2, fragments B and C are in approximate agreement as regards both character dimension and line spacing. We can conclude, then, that the possibility exists—considering only these two criteria—that fragments B and C derive from the same marble plaque.

However, in no case is fragment A—the critical fragment containing the word “Nazareth”—compatible with either B or C. One can argue, of course, that the line spacing on the right side of the plaque was—for whatever reason&#8212double that of the left side of the plaque in lines 17 to 20. That, however, appears to me to be a wholly unreasonable argument which no unbiased scholar would make.

1. Interestingly, Vardaman is much more cautious in his introduction to Avi-Yonah’s chapter in The Teacher’s Yoke: “The three fragments could well have come from two or three different inscriptions. The reading of each would be identical, of course.”

2. A sketch of fragment C had appeared the previous year in Views of the Biblical World (vol. IV, Jerusalem, 1961:257). W. F. Albright figures among the contributors to that collection of essays. It’s 1961 publication (rather than the appearance of the photo of fragment C in an obscure 1958 chapter by Talmon) may have helped stimulate interest in a presumed synagogue in Caesarea, with subsequent funding and allocation of personnel for the ensuing (and fruitful) excavation season in the following summer of 1962.

3. Fragments A and C each have a mem on very the same line, which should make their compararison very easy. Unfortunately, the mem of fragment C is only partially preserved in this spot.

5. The fact that the lamed is written above the line in fragment A does not affect the argument as regards line spacing.