The discovery of fragment A (continued)

Readers who have been patiently following along with this series of posts on the “Caesarea inscription” are now privy to important information which is not otherwise public knowledge: (1) that all three fragments of the inscription belong to different plaques; (2) that no “synagogue” ever existed in Area A/Field O in Caesarea (where the marble plaque would have been placed); and (3) that all of the fragments actually came from outside the area. 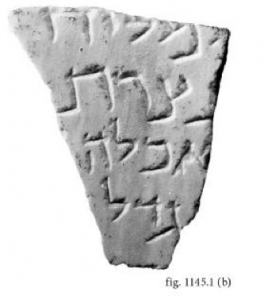 Fragment A with the word “Natsrath”
filling the entire second line. (Ameling)

Fragment A—the one with the critical word “Nazareth”—was found in “area D,” which actually was a trench about 25m long and 6m wide (see illustration below). This trench was roughly 70m to the east of the main area A where excavation director Avi-Yonah was working. Prof. Vardaman was in charge of the Area D trench and was working during the summer of 1962 independently but under the authority of Avi-Yonah.

In the last post I discussed some irregularities attending the discovery of fragment A. Those irregularities include the use of picks and hoes to conduct sensitive excavation work; the fact that this marble fragment was discovered already in a debris basket (why was it not noticed beforehand in situ?); and the fact that Vardaman himself initiated the search of the basket which led directly to the discovery of fragment A.

There were other irregularities. One has to do with confusion over the actual findspot. In his field notes Vardaman writes that the debris basket in which the fragment was found was labeled basket D.V.9 (i.e., “the ninth basket from sector D-five”), though Govaars (2009:55) writes that it was “basket 10.” More significantly, Vardaman writes that the basket came from sector D. V (read: “D-five”), while Avi-Yonah writes that the fragment came from “sector D. IV” (1962:137). Given Avi-Yonah’s other surprising errors regarding this excavation, Vardaman is presumably correct. Sectors D. IV and D. V were next to each other but characterized by distinctly differing material. Sector D. IV was the locus of a “Hellenistic structure” which Avi-Yonah thought might have been Strato’s Tower. Sector D. V, on the other hand, was about 5m to the west and was characterized by a plastered cistern. 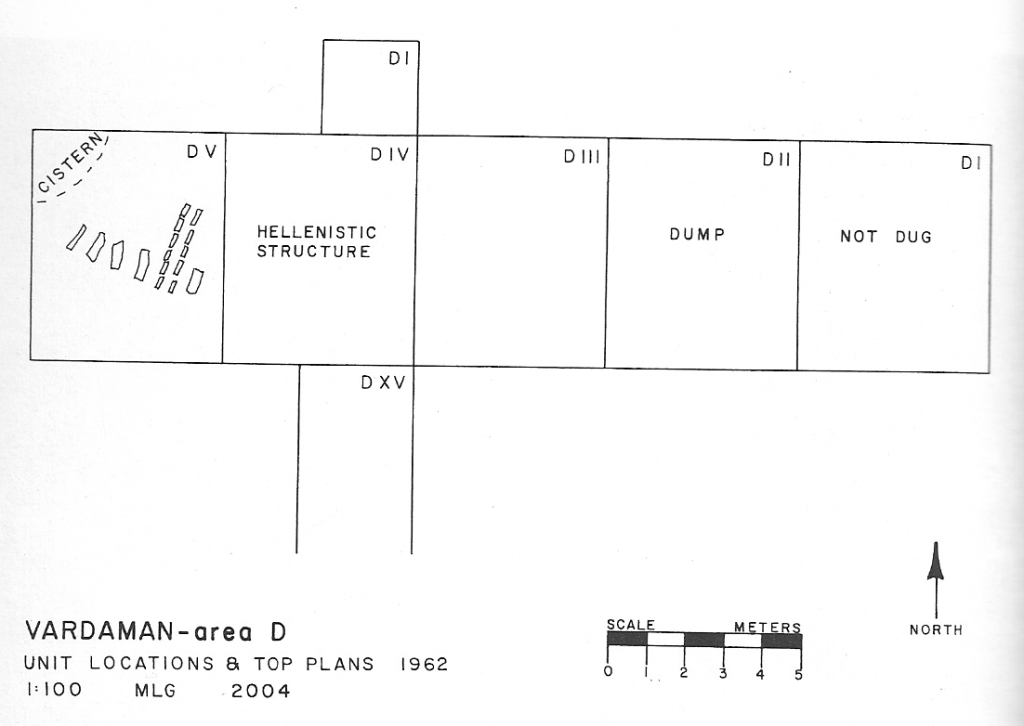 Plan of the trench “Area D” at Caesarea Maritima. Fragment A was found in a debris basket from sector D.V at left.
(From Govaars 2009:53)

A more serious irregularity is that fragment A was found alone. This is quite unexplainable. After all, the fragment is clearly only a small part of a very long inscription listing the twenty-four priestly courses. If it was found in area D. V, then why weren’t other pieces of the plaque also found there? Since the workmen were using picks and hoes, we can expect that one of them broke off fragment A in the course of his work. Other fragments should have been found, especially since we know that subsequent work took place at the findspot. (According to Govaars 2009:55, a plastered cistern was found underneath the stratum where fragment A was found.)

And so, we must now account this another mystery attending fragment A: How could such an important artifact, one with the word “Nazareth” clearly incised and part of a much larger inscription, have been alone, without any accompanying fragments? One might suggest that fragment A was yet another example of “reuse”—an artifact brought in from elsewhere and reused, in this case in the vicinity of a cistern, for what purpose we do not know. There is no suggestion anywhere that fragment A was inside the cistern, nor that the cistern itself ever functioned as a debris container.

To the mystery of finding fragment A alone, we must add the problem that nothing in the archaeological context suggests that such a fragment belonged there. After all, no synagogue is in the area (Govaars).

We are therefore led, inexorably, to the conclusion that fragment A of the Caesarea inscription is an anomaly in more than one sense. It does not belong where no synagogue ever existed, it does not match fragments B or C as regards line spacing, etc., and it should not have been discovered alone. Two scenarios could explain all these facts: (a) fragment A was ‘planted’ in Area D in modern times and never belonged there in the first place; or (b) fragment A originated outside the area and was an example of re-use, the purpose of which is not clear.

We have already noted the curiosity that fragment A was discovered in debris destined for the dump, debris re-examined only at the express request of Prof. Vardaman.

A further coincidence attending the discovery of fragment A has to do with chronology: Vardaman abandoned the excavation work at Caesarea immediately after the discovery of fragment A. The excavation season had yet one more week, yet Vardaman did not participate after August 14, 1962. In other words, fragment A was discovered on Vardaman’s last day of participation. Why? (I shall investigate the chronological issues more closely in a subsequent post.)

The discovery of fragment B

Fragment B has the least number of letters of all three fragments: only three complete letters, all mems. Arguments of line spacing and orthography show that fragment B does not match either fragment A or C. Fragment B was found at some remove from the other(s), namely, in Area F which is about 90 meters from Area A (the “synagogue” site) and 70 meters from Area D (where fragment A was found by Vardaman). Thus, its remote findspot also argues against any association with the other fragments. Avi-Yonah noted that the color of fragment B was lighter than the marble of fragment A (1962:137). All in all, there is nothing to recommend association of this fragment with the others except for wishful thinking. 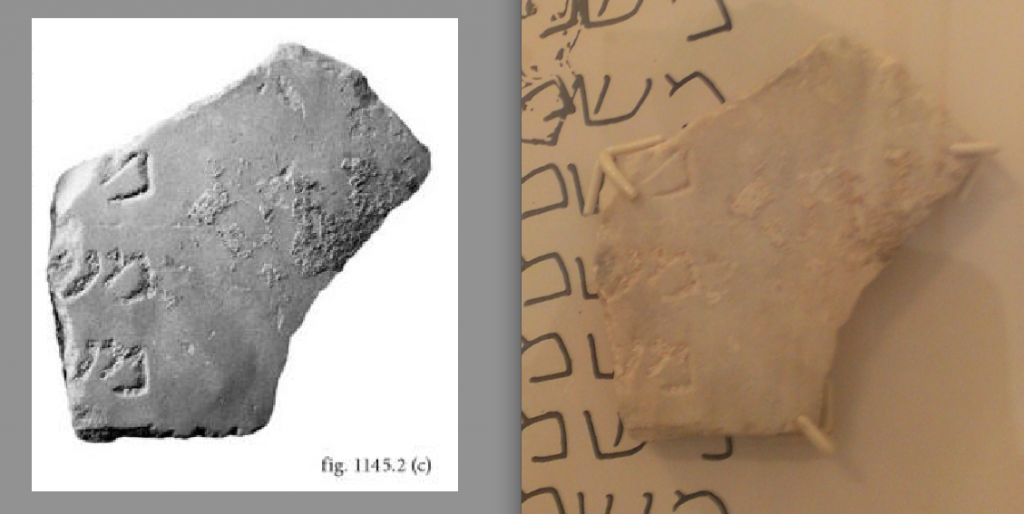 Fragment B was discovered in 1962 during the final week of excavation, that is, after Vardaman had left the scene (see above). Avi-Yonah wrote:

Fragment B was found in area F, 70 m. south of area D. It was found reused in the marble pavement of a Late Byzantine room; among the other paving stones was part of a synagogue chancel screen, showing an ethrog and a lulab” (IEJ 12 [1962]:137).

As with fragment A, there was also some confusion regarding the findspot of fragment B. Avi-Yonah writes that it was found in “Area F” (above) but elsewhere he notes “area E.” Govaars writes:

Thus, the locus where fragment B was found has been variously termed “area E” and “area F.” Area E is mentioned nowhere else. We do not know if it ever existed. Yet, as Govaars correctly surmises, “E” would be the correct name as this was one of only five excavation areas in Field O. Where then did area “F” come from? And what happened to area “E”? Was “E” renamed “F”? If so, why? I do not have answers to these questions.

Excavations were conducted in area F while Vardaman was still present, for the sector is mentioned in Vardaman’s field notes and a photo of the “Byzantine house” in area F is preserved in the E. J. Vardaman estate (Govaars 2009:55). This sector, however, was not under Vardaman’s supervision but under the direction of Eliezer Oren, another assistant to Avi-Yonah. Vardaman’s notes do not mention the discovery of fragment B, which is consistent with its discovery after Vardaman left the scene on Aug. 14.

A couple of observations can be made regarding the appearance of fragment B. First of all, it obviously contains the beginning of three lines of Hebrew writing. However, it can immediately be noted that the writing of the bottom two lines does not match the mem in the top line. While the top mem is smooth, the bottom two lines appear either (1) encrusted with debris; or (2) crudely chiseled.

The other possibility is more nefarious. It is that the bottom two lines of text were chiseled—very poorly—by a craftsperson different from the person who chiseled the top mem. In this case, the bottom two lines were added, perhaps even in modern times. Such an addition would have made the single mem available in the top line part of a series of three lines, lines now belonging to the list of twenty-four priestly courses.

One additional observation can be made. A slight horizontal line is barely noticeable between the first and second lines of text. It appears precisely midway between those two lines and perfectly parallel with the text. The line seems to end at about the middle of the fragment, not far from the beginning of the text. I have no idea if that line was man-made or nature-made, or if it is of any significance.

Conclusion: We have now completed our survey of the discovery of the three fragments of the “Caesarea inscription.” The problems can be summarized: (1) No two fragments go together, as can be seen from considerations of line spacing, color, etc. (2) Fragments A and B were discovered over fifty meters apart, while no findspot is known for fragment C. (3) No synagogue existed in Area A (Govaars), and thus it is virtually certain that every one of the three fragments originated somewhere else. (4) Confusion attends the findspots of both fragments A and B. (5) Irregularities attend the discovery of the critical fragment A, including Vardaman’s sudden departure. (6) There are certain anomalies in fragment B which suggest a different “history” for the top line vs. the bottom two lines.

That all three fragments were subsequently ‘united’ into one plaque must now be viewed as an exercise in convenience. Furthermore, that the reconstituted plaque was ever located in a “synagogue” in the area must be deemed impossible, for no such plaque existed nor any such synagogue. Finally, a series of irregularities and coincidences attending both fragments A and B require further investigation, in that they both leave open the possibility of forgery.