Over the last several months, my understanding has grown regarding the context of the “Caesarea inscription,” and also regarding Professor Vardaman’s central role in its genesis. As a Baptist minister notably employed by several conservative southern institutions, the late Dr. Vardaman’s values aligned strongly with the evangelical strain of Christianity, including belief in the inerrancy of scripture and in the personal call to act in defense and advancement of the true Christian faith. Jerry Vardaman was an evangelical activist. Unfortunately, he was also unprincipled, as we learned here and here. More correctly, he was a ‘super-committed’ Christian who apparently thought nothing of breaking man’s law for the higher law of Jesus Christ. From the microletters to the forgeries at Caesarea, we now know this from studying Vardaman’s professional career and behavior. 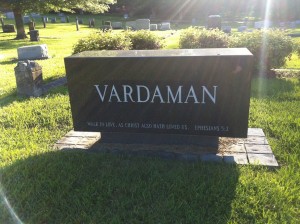 Jerry Vardaman’s incompetence and deviousness very nearly brought the open intervention of the President of ASOR, very nearly had him arrested by the Jordanian police, and very nearly had him publicly expelled from the 1962 Caesarea excavations. However, Vardaman had a gift for making influential contacts on several continents and for raising a good deal of money. Perhaps these ingratiating attributes resulted in only “quiet” measures being taken, time and again, whether to remove him from an excavation, to prevent him from excavating, to foil his arrest by the authorities, or to compel his resignation from the Southern Baptist Theological Seminary. Even after his resignation in 1972, Vardaman did not behave like a disgraced professor. On the contrary, with admirable faith in his offbeat values and in himself, he immediately secured a one year sabbatical at Baylor University, followed by a professorship at Mississippi State University where he had already helped found the Cobb Institute of Archaeology.

The agenda: “find” a synagogue, “find” the Nazareth fragment

The excavation director, M. Avi-Yonah, was highly motivated to find evidence for a synagogue in Area A of Caesarea. Funding for his excavation largely came from the “Louis M. Rabinowitz Foundation for the Exploration of Ancient Synagogues” (a foundation established by his mentor, E. L. Sukenik). We recall that Avi-Yonah and Sukenik were in the generation immediately following birth of the state of Israel, when the entire Israeli archaeological establishment was focused on finding evidence of Jewish presence in ancient times. Such evidence validated the “right of return” and helped Jews lay claim to the land itself. After all, the presence of ancient synagogues is a prime element in this validation, for it shows that Jews were there in antiquity, in Byzantine times, and down through the centuries.

For the Baptist Christian pastor Jerry Vardaman, finding the “Nazareth” fragment was uppermost in his mind. As I observed in post #4 of this series, “Even before Vardaman approached Avi-Yonah and the SBTS, he knew what he wanted to find: the word ‘Nazareth’ on the inscription of the twenty-four priestly courses.” We now know this for the reasons given in that post. Vardaman had a preconceived agenda and, given his documented unscrupulousness, he was certainly capable of forging (or having forged) the fragment he so desired to “find.” 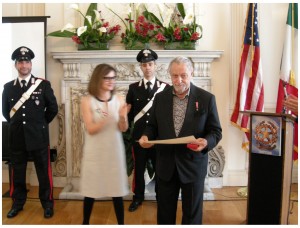 Funding for the 1962 Caesarea excavation season came partly from the Southern Baptist Theological Seminary / Eisenberg Museum (IEJ 1963:146). Establishment of the Eisenberg Museum at SBTS was a great coup by Jerry Vardaman. It was he who secured a very generous gift from the wealthy Jerome Eisenberg. In return, Vardaman asked the SBTS for part of this donation to fund the 1962 Caesarea excavation, and his request was granted. Ten years later, ASOR President G. E. Wright found Vardaman’s absconding with this money for his own project reprehensible:

No matter how much money [Vardaman] has, and Duke [McCall, then President of SBTS] says that he got that money out from under the noses of the Seminary Planning Committee (which had other plans for this gentleman’s funds to help the whole school rather than simply to help a man who can never he helped)…

This is the last sentence of Wright’s scathing letter conveyed in the previous post in this series. “This gentleman” in the above citation is doubtless Jerome Eisenberg. He had given his generous gift to the SBTS, whose Seminary Planning Committee wished to apply it to the entire school. Alas, Vardaman took a substantial portion of those funds to finance the 1962 Caesarea excavation season. Of course, Vardaman was able to do this because he had arranged for Eisenberg to make the bequest in the first place.

As we have seen, funding on the Israeli side also came from the Louis M. Rabinowitz Foundation for the Exploration of Ancient Synagogues. Thus, the funding on both the Jewish and the Christian sides strongly supported the agenda noted in the previous section.

When we put a magnifying glass, as it were, on the 1962 Caesarea excavations, certain anomalous facts take on new meaning in light of our new-found insight into Vardaman’s disgraceful character and abilities, as noted in the previous post. There, Dr. Wright described Vardaman as “devious”—a useful one-word summation. Given his highly negative evaluation, we must revisit every item of evidence with which Dr. Vardaman was involved. Doing so, we will find unexplained anomalies attending at least three items of evidence, all specifically linked to synagogues: (A) the Priestly Courses fragment A; (B) the Priestly Courses fragment B; and (C) a fragment from a synagogue chancel screen. Each of these artifacts presents mysteries.

The three above fragments are found only in ancient synagogues. This made them particularly desireable ‘finds’ for Avi-Yonah. However, we now know that no synagogue existed in Area A/Field O of Caesarea (where all these fragments were found), and hence these specific synagogue artifacts come under immediate suspicion. As it happens, Vardaman may have been responsible for the discovery of all three.

One grave problem is that all three fragments were not found in situ. Prof. Jo Annn Hackett (Harvard University) has written:

Because we have seen that there are forgers at work who are very sophisticated, we must make epigraphic (grammatical and palaeographic) conclusions based solely on inscriptions found in situ by trustworthy scholars and excavators. [Near East Archaeology 68:1-2 (2005):63]

The 2010 Jerusalem Forgery Conference concluded that “all unprovenanced material must be treated with extreme suspicion” (STRATA 2010:164). The three synagogal artifacts noted above were all unprovenanced. Fragment A of the Priestly Courses inscription was not found in the ground, but in a refuse basket. Fragment B was allegedly found “in area F… reused in the marble pavement of a Late Byzantine room” (Avi-Yonah 1962:137). This, of course, is not an exact findspot. We know nothing about the “marble pavement” and there is no official report of the “Byzantine room.” In fact, “Area F” itself is something of a mystery. This “area” was ostensibly under the supervision of assisting archaeologist Eliezer Oren, and was located some 70 meters south of Area D. However, Area F is sometimes referred to as “Area E.” This demonstrates some confusion regarding this locus even in 1962. The only “hard” evidence we have for Area F is its indication on a couple of maps, and a photo courtesy of Jerry Vardaman (reprinted at Govaars 2009:55). 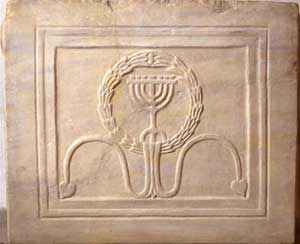 When we consider the findspot for the chancel screen fragments, the situation becomes even more interesting. One of these fragments, we are told, was found in area F along with the fragment B of the Priestly Courses inscription discussed in the previous paragraph. This chancel screen fragment is decorated with “an ethrog and a lulab” (Avi-Yonah:137. Cf. Govaars 2009:56, 232). The same problems affect this artifact as with fragment B of the Priestly Courses inscription: without a final report or any systematic description of the context, we have no idea of the exact provenance of this artifact. There is also reason to suspect that this fragment is the same as one Vardaman claimed to find in Area A. It was also a chancel screen fragment and was “decorated on both sides.” The over-riding problem is that there is insufficient documentation for all these finds. In addition, there are contradictions. The result—already noted by Govaars in her 1983 thesis—is that the 1962 Caesarea excavation season produced a great deal of confusion.

We must inevitably lay much of the blame on the 1962 Caesarea excavation director, Michael Avi-Yonah. We have seen that he entered the excavation with an agenda: to authenticate the presence of a synagogue in Area A. This over-riding goal induced him to look favorably on any finds of a “synagogal” nature. Such finds include the fragments of the Twenty-Four Priestly Courses, and also the chancel screen fragments. In other words, there was great motivation on everyone’s part to “discover” such fragments. Everyone affiliated with the excavation knew this. When we marry that motivation with flagrant unscrupulousness—as was the case with Vardaman—then we have the very real possibility for not one forgery, but for multiple forgeries.

Already in 1962 Avi-Yonah was a seasoned excavator. He certainly was well acquainted with the rampant problems of the black market and with the ubiquity of forgeries. It was his job, as excavation director, to keep good books, to closely monitor the excavation activity, to prevent pilferage, and to prevent any “planting” of evidence. In this season, he apparently did none of these things—or he did them very poorly. We see this from the very start, when he took on a man like Vardaman as his assistent.

Avi-Yonah not only misjudged Vardaman’s character. He also kept very sloppy records of the excavation activity. In many cases, he preserved no records at all. We have, as a result, no final report on anything that transpired in the 1962 season. We have confusion regarding strata and evidence that Avi-Yonah changed his mind from one preliminary report to the next. There is also confusion as to findspot, and even as regards the nature of the finds themselves. As for the putative synagogue structure in Area A which Avi-Yonah (and subsequent archaeologists) claimed, Govaars writes: “there is no clearly defined sacred space” (2009:139). When re-examined, nothing in the structural remains evokes a synagogue.

At times Govaars finds Avi-Yonah’s conclusions “inexplicable.” She writes in one place that “he should have been aware,” in another that the evidence “contradicts Avi-Yonah’s assertion,” in yet another that his conclusion is “disquieting” (2009:135-36). She bemoans the lack of proper record keeping, of careful stratigraphical work, of poor publication. All these characteristics allow the existence of a great deal of misinformation. When we place someone like Jerry Vardaman into this toxic mix, we see a huge potential for mischief, including forgery.

[I]t is essential that the pottery washing, drying and arrangement for reading, and the marking and storage of diagnostic pieces be well organized, otherwise chaos and confusion will be the usual results. (J. Laughlin, Archaeology and the Bible, 2000, p. 27)

Clearly, the excavation techniques employed in the 1962 Caesarea excavation did not meet these normal standards. Chaos and confusion were the result. It was the perfect storm in which to “produce” evidence serving multiple powerful agendas.