Translated from the French by René Salm
(2013)

The history of Christian origins must be re-examined from new perspectives. It demands review, correction, and completion in a scientific and objective spirit, that is, lacking doctrinal presupposition and disengaged from every metaphysic and superstition. In the twentieth century, mankind has the duty to consider every belief as a provisional hypothesis. We must not ignore that the history of Christian beginnings—as it has been taught to us—corresponds neither to the needs of a reasonable faith (to the extent that any faith can be reasonable), neither to the lacunae in our documentation, nor to the parameters of science.

We shall not discuss here notions such as God, immortality, resurrection, or redemption. Nor shall we ask ourselves how it is that a modern Christian can believe the Christ—deceased and resuscitated in Palestine about nineteen centuries ago—is at once in heaven beside his Father and in the thousands of hosts distributed daily to the faithful all over the world. Theologians may claim sufficient expertise to resolve these problems, yet the solutions they offer remain every whit as certain to mystics as they are mysterious to everybody else. We propose to put aside the dogmatic aspect of Christianity while retaining its historical aspect. After all, from the moment when religion claims a foundation in the empirical facts of history—that is, from the moment it assures us that it was founded by a singular man at a particular time and in a precise location in the cosmos—from that time forward the religion renders itself subject to scientific verification and empirical enquiry.

The Annunciation by Da Vinci

The gospels are full of contradictions and impossibilities. An angel informs Joseph that, though his betrothed is yet a virgin, she is quite pregnant “from the Holy Spirit,” and that her son-to-be will be named Emmanuel (“God With Us,” Mt 1:20–24). On the other hand, in Luke (1:31) the child will be called Jesus—a minor contradiction in names which need hardly detain us. In any case, the gospels cannot date before 130 CE, contrary to what is so commonly affirmed—for the Jesus Christ of the gospels was unknown to both pagan and Jewish writers of the first century, as we have shown elsewhere (Analyse des Origines Chrétiennes (1963, 92 pp.). Indeed, the secular history of antiquity knew no crucifixion of any prophet in Jerusalem around the year 30 CE. Even the existence of a first Church in Jerusalem is far from established. By contrast, the Christian texts recount circumstances of a thoroughly astounding and unforgettable god-man—one who is first a god and only secondarily a man. Had such a being existed, writers renowned and obscure throughout the entire Roman world would have hastened to take note. The opposite, however, is the case.

Tradition asserts that Christianity came out of Judaism. However, such a simple declaration is belied by the facts which argue in another direction and show that the case is more complex. In the New Testament, it is undeniable that we encounter numerous concepts, episodes, and citations deriving from Judaism. However, we do not know how these became attached to a Christian religion which, from the first, hardly conformed to Jewish norms. The mere presence of some Jewish passages in a text does not render the entire text Jewish. There could have been borrowing or, more likely, a fusion of disparate elements. In short, the Jewish aspects of the New Testament may not be primary but secondary.

If, before peremptorily admitting orthodox conclusions, one adopts the reasoned methodology above (endorsed also by Descartes), then one finds upon analysis that the Jewish elements in the gospels lose much of their apparent importance. This is contrary to the texts themselves which couch the story of Jesus in an emphatically Jewish milieu—one, however, not particularly well informed, as if Greek gentiles wished to imitate Judaism. The Church Fathers, too, treat their religion (and Jesus) as emerging squarely from the fabric of Judaism. However, the religion in fact owes little of fundamental importance to Judaism. Thus, Abraham—so often cited—brings nothing to Christianity. His God, Yahweh, is (contrary to what is often affirmed) not at all the Father God of Christians or of Christ. Yahweh was not even admitted into the Christian pantheon eventually known as the trinity. Furthermore, the Jewish rite of circumcision was never mandated by Christians. In fact, it was supplanted by baptism. The sabbath, too, never assumed a central position in the new religion. 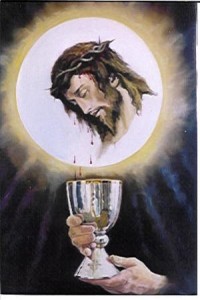 The blood of Christ.

Jews could never admit that the Spirit of God impregnated a woman who, while remaining a virgin, then gave birth to the messiah. All these conceptions—so integral to Christianity—are entirely outside the bounds of Judaism. The Christian eucharist, wherein Jesus gives of his blood to drink, is an absolute abomination to Jews, for the book of Genesis forbids the drinking of blood. Such fundamental observations allow one to conclude that those Jews who converted to Christianity were not particularly attached to the beliefs and practices of their erstwhile religion, nor to the authority of the High Priest in Jerusalem. These were probably Jews of the diaspora suffused with pagan thought and far from the Jewish homeland.

Jewish law instructs: “cursed is he who is hung on a tree” (or crucified). Yet, Christianity worships one who was crucified. When Jesus in the Gospel of Mark (10:12) affirms that a woman who divorces her husband and marries another is an adulteress, this reflects a situation outside of Jewish law which does not recognize divorce at the initiative of the woman. When all the evangelists report that Jesus was interred in the tomb of Joseph of Arimathea, this cannot have taken place in Palestine, for it constituted an outrage for a Hebrew to inter one in the tomb of another family, thus breaking the unity of family or clan. These are some of the miscellaneous data which invalidate the common opinion that Christianity emerged from Judaism.

However, if the Jewish aspects of Christianity are only superficial, then whence derived the essential traits of this new religion? Logic dictates the answer: they must have come from the pagan cults which surrounded Palestine on all sides. Such cults are well known in antiquity. They encouraged the formation of syncretistic Jewish sects at the margins of orthodoxy and, in turn, spawned radically new philosophies and religions.

Christianity could not have been born without the contributions of both Greek philosophy and of the mystery religions. First of all, we note that the medium of the New Testament is Greek. Jesus speaks Greek, as do his apostles. In fact, “Jesus” is the same name as “Jason” (cf. here). “Christ” is a poor pronunciation of chrestos, a Greek word which means “the good,” whence our Good Lord [Bon Dieu]. The first bishops were Hellenists. When the evangelists cite Jewish scripture, their passages are drawn from the Greek of the Septuagint, not from the Semitic version. Furthermore, we possess not a single Christian manuscript in Hebrew. Notwithstanding, all these data have not prevented some obstinate theologians from supposing that the first gospel was in Hebrew.

The Church Fathers themselves knew how much they owed to the Greeks. Justin dared to write: “Those who have lived according to the Word are Christians, [3-4 words in Ory’s text are illegible] for atheists, as with Socrates, Heraclitus, and others with the Greeks.” After him, Clement of Alexandria wrote: “Paul taught us according to pagan fashion.” Clement also credited Greek civilization thusly: “Homer spoke of the Father and of the Son by a fortuitous coincidence… Plato and Pythagoras divined the truth in certain prophetic words.” Yet today no one permits himself to speak of the myth of Christ, of Christian myths, or of their Hellenic background. Yet Justin himself wrote: “If we say that Christ, the Word of God, was born of God by a peculiar mode of generation, this he has in common with Hermes… Dionysus was put in prison like Jesus…” [I have not been able to find this citation. If correct, perhaps Justin had the imprisoned John the Baptist in mind here, rather than Jesus?—RS] Justin continues: “The Christ was born of a virgin like Perseus, he healed others like Aesculapius, he resurrected into heaven like Dioscuros…”