Thus the Babylonian goddess Ishtar. She came down from heaven, was reduced to powerlessness, but was eventually reanimated and returned back to heaven. Ishtar was preceded in history by another goddess, Inanna, who was sentenced to hell, killed, hung on a tree for three days, resuscitated, and finally resurrected from the nether world. 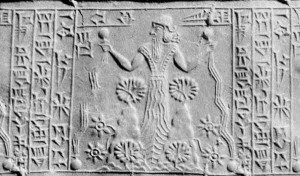 Marduk, the Sumerian AMAR (“calf”) of UTU (the sun), that is, the great Son of God who overcomes death through resurrection.

The Babylonian Marduk endured a passion. He traveled to a fabled mountain [Mt. Hermon = the Bronze Age “Zion”], descended into hell in order to combat Death, and was put to death while another entity accused of crime was released. Finally Marduk resurrected. Now, we know that Jesus frequented a mountain [also Mt. Hermon at the transfiguration, cf. Mk 8:27 & 9:2 ff.], that Barabbas was released, that Jesus descended into hell, that he was crucified for three days, and that he resurrected.

At his festival, the god Attis (represented by a bough surrounded by sprigs) resurrected after three days. [On three days of darkness, see here (PDF, pp. 13 ff).] His celebrations ended with a sacramental supper followed by a mystical wedding of the god. The evangelists also have the Last Supper and the Wedding Feast at Cana, and the similarities with the cult of Attis were so strong that Augustine lamented to hear that “the god with the phrygian cap is Christian!”

The Adonis rites lasted three days and terminated with the resurrection of the god. According to St. Jerome, the cave in Bethlehem where the savior’s story begins was previously a shrine dedicated to lamentations for the death of Adonis. The latter had been the Son of God long before Jesus came on the scene. Adonis was also variously known as heavenly shepherd, carpenter, and fisherman. At Alexandria he was assimilated to the god of grain and his sister was dubbed the “wine of heaven.” Grain and grape were annually put to death according to the seasons. Jesus assimilated both elements—he is the bread of life descended from heaven, and also the vine. In the eucharist, wine is his blood and bread is his body.

One can go on in this vein drawing parallels between Christianity and older pagan religions. Dionysus, the god of wine, was sometimes represented walking on water… But the above analogies serve to show that at its inception the Christian religion had nothing either original or exclusive. [I differ with Ory on this important point. Many of the core logia attributed to Jesus have no parallels in the West.] Jesus was a god like many others. His following was similar and we can surmise that considerable borrowing took place between one cult and another. Thus a good Christian could come out of the pagan mysteries as late as the third century, as did St. Cyprian, bishop of Carthage (d. 258). In childhood he was a devotee of Apollo, at age seven a follower of Mithras, at ten of Demeter and Kore, then also of the serpent Pallas on the Acropolis. At age fifteen he spent fifteen days on Mt. Olympus accompanied by seven hierophants. To these we can add his participation in the mysteries of Hera at Argos, his veneration of the Artemisian philosophy of the four elements, and his participation in certain Egyptian rites. At the age of thirty we find Cyprian in Babylonia learning the secrets of astrology. Eventually, he settled in Antioch and converted to Christianity. In so doing, this pagan mystic entered a religious world which, we can be sure, was not stranger than what he already knew. 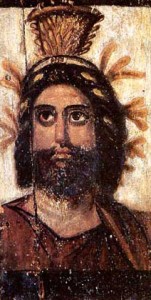 Serapis, a syncretistic god created by the (Greek) Pharaoh Ptolemy to unite Hellenistic and Egyptian religions.

In antiquity such an evolutionary “search” by an initiate was not unusual, nor had it been for a long time. About 131 CE, the emperor Hadrian wrote that in Egypt, “those who venerate Serapis are at the same time Christians, and those who call themselves bishops of Christ are devotees of Serapis.” One understands that many theologians wish to doubt the authenticity of such passages, but other examples readily exist in a similar vein. Thus, about the year 430—by which time one would suppose that Christianity was virtually universal in the West—the Marseillaise priest Salvian noted that the Christians of Carthage adored the heavenly goddess second only to Christ, sometimes even before Christ.

One cannot deny that the Christianity of today is altogether different than of yore. But one equally cannot deny that the religion has evolved away from the unabashedly pagan environment in which it was born. [This is evident in the many pagan festivals which were co-opted for Christianity—midwinter solstice (the birth of the sun) became Christmas; spring equinox (the natural new year) became Easter; etc.] Two important facts should be borne in mind: (1) Christian origins are hidden under a patina of Judaism, as a Jewish framework replaced the pagan but did not altogether eliminate traces of the latter; (2) mystery religion strongly influenced early Christianity. The mysteries of initiation are carried out in secret. This largely accounts for the reduced empirical evidence of pagan influence on Christianity.

One should keep in mind that the Christian passes through a stage which itself is avowedly a mystery. Paul spoke of revelations, and some of his adepts continued to hold on to their secret traditions. About the year 200, the Church considered that the pagan mysteries were themselves “diabolical caricatures of Christian mysteries.” In the early fourth century, the conversion to Christianity of the pagan elites and of most cities reduced interest in increasingly esoteric pagan doctrines. Pagan influence continued to wane with the spread of infant baptism into Christianity (replacing adult baptism) and as the barbarian tribes outside the Roman empire adopted the religion en masse. But the Christian “mystery” remained known to a minority and became increasingly an unwritten esotericism hardly detectable in the lost meanings of symbols (fish, dove, serpent), rites, gestures, words, prayers, and religious acts which—at least for some clergy—maintained cherished hidden meanings taught to those who were worthy. This “arcane discipline” (as it was dubbed in the seventeenth century) was obscure already in early Byzantine times. Among the general Christian populace it has never been known. 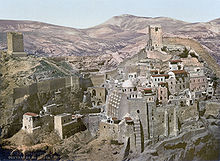 The Mar Saba monastery (founded in the 5th century CE on the West Bank of the Jordan) where evidence for a “Secret” Gospel of Mark was discovered by Morton Smith in 1973.

Next to Paul, the Gospel of Mark shows that the first Christians knew a secret doctrine “while those outside hear everything in parables.” [This is borne out by the discovery of the “Secret Gospel of Mark,” and Clement of Alexandria’s accompanying letter which describes two versions of the gospel, one for those outside, and another for initiates.] Mark’s gospel served to vulgarize the secret, eventually negating the mystery. The [canonical] gospel was fashioned for the ignorant, for preaching, while the “true” Christians transmitted the sacred tradition in secret. All this bypasses scholarship, as historians still insist upon searching for the meaning of Christianity only in the canonical works while assiduously ignoring all else!

Paul’s Christ was a god who died and resurrected. Paul preached a mystery. Christ’s baptism was the guarantee of a spiritual resurrection reserved for initiates who imitated him. Christ’s death was not the material crucifixion (whether Roman or Jewish) related in the gospels. Rather, it was symbolic and cosmic. For Paul, the cross was Christ’s triumphant heavenly vehicle. [In the next several sentences Ory attributes to Paul teachings commonly attributed to Jesus. In translating this remarkable section I have been careful to parse Ory’s words—which refer to Paul, not to Jesus.] The mystery which Paul revealed had been hidden “from the ages” (proof enough of its antiquity), a mystery which the Jewish god ignored. Paul’s vision of reality was dualist, opposing the world above to the world below, Christ to Yahweh, gnostic grace to Jewish law, the spirit to the flesh, baptism to circumcision. His communion included no ritual consumption of god. Paul does not know the existence of Herod and Pilate, of Joseph and Mary, of Anne and Caiphas, of the Magi and shepherds, of the miraculous birth of Jesus… Now, the Apostle’s views are preserved in his letters, and those views can only gain in weight when we realize that his letters clearly antedate the gospels.

Christianity conquered Europe because it was a mystery religion. No doubt remains on this score for the inquirer who places reason before credulity, history before legends and fables. No Roman emperor would have adopted (nor even protected) a religion whose hero was a Jewish messiah condemned and crucified by the Roman army. The vocabulary, ideas, and rites of the new religion are essentially Greek, with a strong admixture of pagan influences from Babylonia, Iran, and Asia Minor. Christianity was a syncretism that took place in the first century of our era, a hodgepodge of Middle Eastern ideas. It claimed salvation for the soul through resurrection, and taught the means to that end.

Seen in this way, the history of Christianity must be revised. Those who undertake this task will discover fascinating surprises as their eyes open onto a very different history from that taught in church and school. — Georges Ory