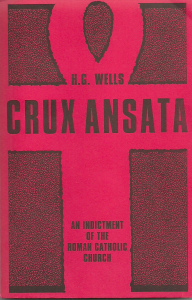 H.G. Wells (best known for his science fiction classics War of the Worlds, The Invisible Man, and The Island of Doctor Moreau) penned his provocative book, Crux Ansata: An Indictment of the Roman Catholic Church in 1943 during the Second World War, following the author’s tenure as Minister of Allied Propaganda. Crux Ansata (Lat: “Cross with a handle”) refers to the symbol which in the late Middle Ages came to represent the Christian religion centered in Rome. The book caused an immediate sensation, provoking bitter rebuttals from the Church and conservatives in the West. Such reactions are understandable when one notes that Wells ends with a chapter entitled “Why don’t we bomb Rome?” (In some editions the book begins with that chapter.) Though Wells is uncompromising in his criticism of Catholicism, however, one should not suppose that his book is a one-dimensional tirade. The author gives merit where it is due, and is able to praise certain past accomplishments of the Roman Church, particularly it’s role in unifying Europe in times of crisis and the activity of myriad “good Christians” (both in and out of robes) who have led upstanding and virtually anonymous lives through the generations. However, he makes it clear that was not (and still is not) enough to mitigate the systemic rot at the very core of the Christian religion.

Wells shows that the problems with Christianity ultimately come from the top—the blind leading the blind. He traces the root cause to Constantine who fused Christianity to a powerful state apparatus. Thenceforth, Catholicism was inextricably intertwined with (and ultimately consumed by) power. An excellent writer, Wells furnishes a brief but cogent survey of the history of Christianity since Constantine. In fact, I would endorse this little book (96 pages) as an initial review of Christian history for the open minded novice. 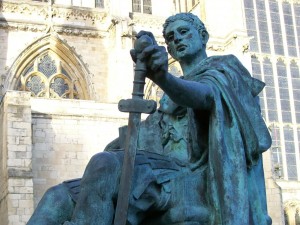 Aside: I personally agree with Wells’ above assessment regarding the critical role of Constantine, while noting that the core problems of Christianity in fact predated that monarch. Those problems go back to the very origins of the religion, namely, to the invention of the mythical character “Jesus of Nazareth.” It would appear—as some mythicists argue today—that “Jesus” was at first an entirely spiritual conception/entity. However, in the first century of our era certain Hellenist “Christians” hit upon the astonishing strategem of anthropomorphizing that conception. Nor did they shy away from providing their invented figure with the awe-inspiring biographies that we read in the canonical gospels. Hence, from its inception the Christian religion has been constructed around a central falsehood—the astounding invention of its main character, an invention which long preceded Constantine. This incendiary “mythicist” suspicion, however, was quite unknown to Wells.

I possess the American Atheist Press edition of 1981. In a short Foreword, the Editor (the late Madalyn O’Hair) writes:

This bold and outspoken attack on the Roman Catholic church is one of the most provocative books of our times. When first published it created a sensation in England and copies sent to the United States were confiscated by customs officials. It was only when the manuscript was received in a private letter that an edition in this country was possible. We believe that every man and woman in America will want a copy of this terrific indictment of the Roman Catholic church by so eminent a world figure as H.G. Wells.

(P. 9) [Emperor Constantine’s] idea of stamping out all controversy and division, stamping out all independent thought, by imposing one dogmatic creed upon all believers, is an altogether autocratic idea, it is the idea of the single-handed man who feels that to get anything done at all he must be free from opposition and criticism. The story of the Church after he had consolidated it becomes, therefore, a history of the violent struggles that were bound to follow upon [Constantine’s] sudden and rough summons to unanimity. From him the Church acquired that disposition to be authoritative and unquestioned, to develop a centralised organisation and run parallel with the Roman Empire which still haunts its mentality.

(12) Christianity early ceased to be purely prophetic and creative. It entangled itself with archaic traditions of human sacrifice, with Mithraic blood-cleansing, with priestcraft as ancient as human society, and with elaborate doctrines about the structure of the divinity. The gory entrail-searching forefinger of the Etruscan pontifex maximus presently overshadowed the teachings of Jesus of Nazareth; the mental complexity of the Alexandrian Greek entangled them. In the jangle of these incompatibles the Church, trying desperately to get on with its unifying task, became dogmatic and resorted to arbitrary authority.
Its priests and bishops were more and more men moulded to creeds and dogmas and set procedures; by the time they became popes they were usually oldish men, habituated to a politic struggle for immediate ends and no longer capable of worldwide views. They had forgotten about the Fatherhood of God; they wanted to see the power of the Church, which was their own power, dominating men’s lives. It was just because many of them probably doubted secretly of the entire soundness of their vast and elaborate doctrinal fabric that they would brook no discussion of it. They were intolerant of doubts and questions, not because they were sure of their faith, but because they were not. The unsatisfied hunger of intelligent men for essential truth seemed to promise nothing but perpetual divergence. 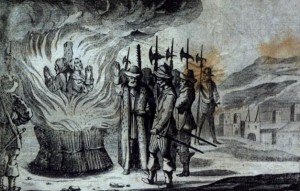 Persecution of Waldensians.
This is one of the more benign woodcuts extant.

(16-18) Closely associated with the Cathars [of the 12th century] in the history of heresy are the Waldenses, the followers of a man called Waldo, who seems to have been comparatively orthodox in his theology, and less insistent on the “pure” life, but offensive to the solidarity of the Church because he denounced the riches and luxury of the higher clergy… [Pope Innocent III eventually instigates a Crusade against the Waldensians and Cathars.] The story of that crusade is a chapter in history that the Roman Catholic historians have done their best to obliterate.
Every wandering scoundrel at loose ends was enrolled to carry fire and sword and rape and every conceivable outrage among the most peaceful subjects of the King of France. The accounts of the cruelties and abominations of this crusade are far more terrible to read than any account of Christian martyrdoms by the pagans, and they have the added horror of being indisputably true…
The shrewd, pompous, irascible, disillusioned and rather malignant old men who manifestly constituted the prevailing majority in the councils of the Church, resented any knowledge but their own knowledge, and distrusted any thought that they did not correct and control. Any mental activity but their own struck them as being at least insolent if not positively wicked. Later on they were to have a great struggle upon the question of the earth’s position in space, and whether it moved round the sun or not. This was really not the business of the Church at all. She might very well have left to reason the things that are reason’s, but she seems to have been impelled by an inner necessity to estrange the intellectual conscience in men.
Had this intolerance sprung from a real intensity of conviction it would have been bad enough, but it was accompanied by an undisguised contempt for the mental dignity of the common man that makes it far less acceptable to our modern ideas. 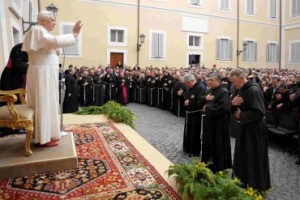 Pope Benedict XVI blessing Franciscans in 2009, at the 800th anniversary of the founding of the Franciscan order.

(19) The struggle with the Franciscan Order is interesting, because it foreshadowed the great troubles that were coming to Christendom. All through the thirteenth century a section of the Franciscans were straining at the rule of the Church, and in 1318 four of them were burnt alive at Marseilles as incorrigible heretics. There seems to have been little difference between the teaching and the spirit of St. Francis and that of Waldo in the twelfth century, the founder of the massacred but unconquerable sect of Waldenses. Both were passionately enthusiastic for the spirit of Jesus of Nazareth… But both were instances of an outbreak of conscience against authority and the ordinary procedure of the Church. And it is plain that in the second instance, as in the first, the Church scented rebellion.

(20–21) In several respects the development of the Black Friars or Dominicans—the Franciscans were the Grey Friars—shows the Roman Church at the parting of the ways, committing itself more and more deeply to a hopeless conflict with the quickening intelligence and courage of mankind. She whose duty it was to teach, chose to compel. The last discourse of St. Dominic to the heretics he had sought to convert is preserved to us. It betrays the fatal exasperation of a man who has lost his faith in the power of truth because his truth has not prevailed.
“For many years,” he said, “I have exhorted you in vain, with gentleness, preaching, praying and weeping. But according to the proverb of my country, ‘Where blessing can accomplish nothing, blows may avail,’ we shall rouse against you princes and prelates who, alas! will arm nations and kingdoms against this land… and thus blows will avail where blessings and gentleness have been powerless.”