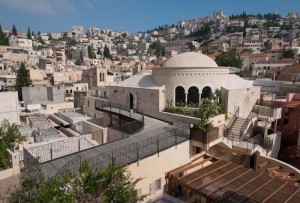 The “Chapel of Unity,”
part of the new Mary of Nazareth International Center
with Nazareth in the background.

I am now approaching the midpoint of writing my forthcoming book, NazarethGate (Fall, 2015). Chapter Ten deals with the Nazareth house allegedly “from the time of Jesus” which was touted to global media back in December 2009—just a few days before Christmas. A couple of years ago I dedicated a Scandal Sheet to this bogus claim on my Nazarethmyth website. There, I pointed out that the claims in the popular press do not tally with the Israel Antiquity Authority’s own very terse report which makes no mention of first-century remains, much less of evidence from the turn of the era. But the media has a momentum of its own—so much so that the desires of Christians to authenticate their precious gospel story often becomes the only news we read and hear anywhere. 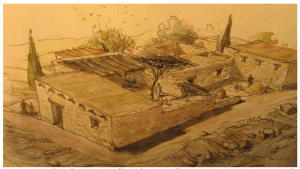 My Chapter Ten will, of course, go much deeper into the story, one which leads us quickly to a new and imposing mega-monument now on the premises—the Mary of Nazareth International Center (see also here). The Center has a 120-seat theatre for rent, amenable to performances, conferences, and motion pictures, a restaurant, boutique, botanical garden, chapel, and offices of the Chemin Neuf association, which runs the Center. Let us not forget the Late Roman remains of the “house from the time of Jesus” which are still visible on the ground floor of the Center, for gawking by pilgrims on their ways to the theatre and restaurant.

In fact, the Center has not one but four discrete theatres, all outfitted with state-of-the-art acoustics and thirty video projectors. Each theatre shows a fifteen minute film attempting to document the four main points of “sacred history in its logic, its beauty, and its coherence” (in the words of the Center’s director). Leaving no stone unturned, the films can be experienced in any one of ten languages at the push of a button. The idea is that tour groups from many countries will move from one room to the next every fifteen minutes, thus receiving the core Catholic message in its full multimedia splendor and in their own language.

One might wonder how a simple country girl in Nazareth would discover “the scriptures on the knees of her parents,” when few people in that era could read and hardly any women received an education. Interestingly, however, the events in Multimedia show 1 do not take place in Nazareth at all but in Jerusalem—Mary learns the scriptures in the Temple! Readers familiar with the Protevangelium of James will be acquainted with this extraordinary account of history. 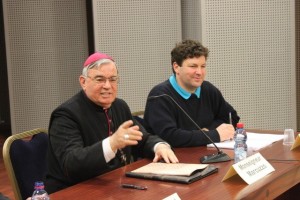 The man behind the imposing Mary of Nazareth Center is one Olivier Bonnassies, a 48-year old frenchman who is “President of the foundation for evangelizing via media and Director of the Association Mary of Nazareth.” The Nazareth complex is only one of many projected Marian centers, as Bonnassies stated in 2011: “In a second phase, the Mary of Nazareth project will unfold in the whole world, through the creation of associate Marian Centers which will use the contents elaborated by the Nazareth Center. Three are already planned, in Lebanon, Brazil and Poland, with increasing local funding for the multiplication of multimedia productions distributed in these Marian Centers, for traditional means of communication, and for the display of Web pages referring to the Virgin Mary and to the whole of the Christian faith in its association with other movements.”

Bonnassies is a remarkably busy and successful individual. He received a diploma from the Ecole Polytechnique in 1989 with a focus on media studies, and in 1994 received a License in Theological Studies at the Institut Catholique de Paris. Subsequently he organized a program for start-up enterprises at the prestigious HEC School of Management. Since 1993 Bonnassies has successively directed a long list of agencies with various acronyms, including METALOG (founder), STELLA, OPALE SMR, MEDIALOG, SARL MDN (i.e. Marie De Nazareth) PRODUCTIONS, and PANAGHIA PRODUCTIONS—the last a cinematographic production company. (See here for the whole list.) It can be noted that OPALE SMR (a management consulting company) was founded in 1997 with Olivier’s brother, Axel Bonnassies, a graduate of Harvard Business School. Its estimated annual revenue is $2,833,000. SARL MDN Productions handles the media outreach stemming from the Marie de Nazareth Center and mirrored in other Marian centers around the world. It has an annual capital of 75,000 euros. 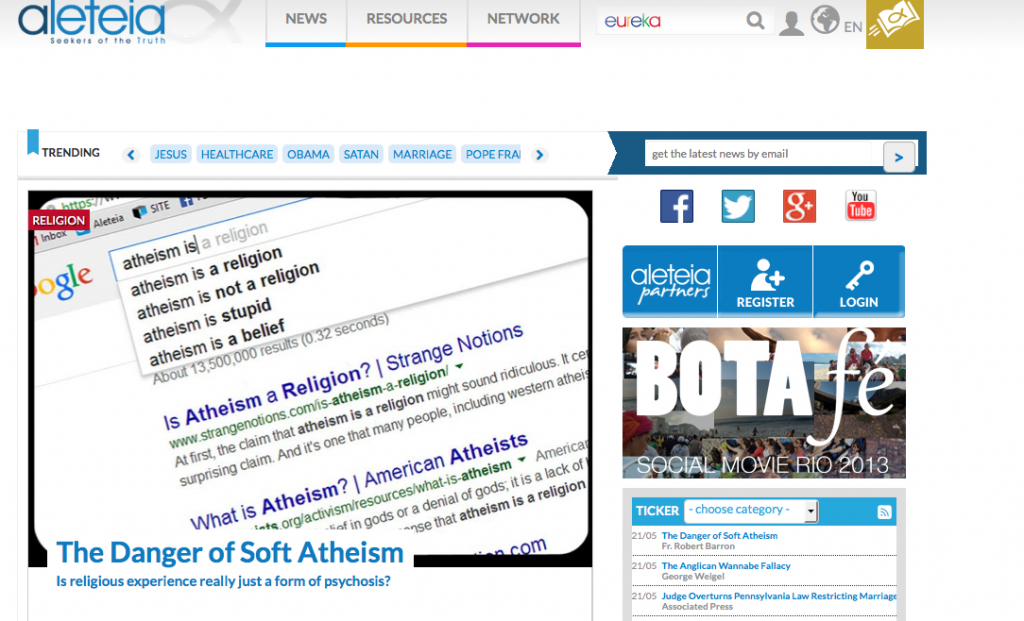 Yet another of Bonnassies’ ventures—and no doubt his most massive—is called Aleteia (launched Jan. 29, 2013 in Rome). Subtitled “Seekers of the truth,” Aleteia presently consists of 1,200 media outlets in 15 countries and in 6 languages. It is an umbrella organization which draws on other large Catholic networks, including EWTN (U.S.A.), TV Cançao Nova (Brazil), Canal 13, Yucat, etc. Bonnassies explains: “Our societies are experiencing a rapid digital revolution in which it is necessary that the Church be a pioneer in evangelization. The Internet is a formidable means for the transmission of the faith. . . Aleteia has the mandate of choosing the best content and delivering the strongest Christian responses in two clicks.” At last check, its English website has six “trending” tabs (including “Obama” next to “Satan”), scrolling banners, “Top News,” “Feature Stories,” sidebars, and videos.

Olivier Bonnassies has also been Executive Director of the Chemin Neuf (“New Path”) community, a global arm of the Roman Catholic Church which reaches out especially to young people. The Chemin Neuf has its own media network, the a.m.e.. Thus, like an octopus with numerous tentacles, Bonnassies appears to be at the very center of the Catholic Church’s contemporary media campaign of evangelization. In one interview, he explains that “the Catholic world is the victim” of a concerted effort of disinformation and laments that “from an international standpoint one finds no contemporary Christian media with comprehensive presence on the Internet. Though Christian content is important, it is expressed at a local level, is poorly ranked on Google, and is limited in reach. It takes the websurfer much time to uncover quality Christian content.” So, in my very small capacity, I’m making an effort to be helpful by peppering this post with Google-friendly terms such as “Center Mary of Nazareth” (Centre Marie de Nazareth), “Chemin Neuf”, “Bonnassies”, and—for good measure—am entitling the post “Latest News From Aleteia.” Hope this helps, Olivier!

Bonnassies states that the goal of the Association Marie de Nazareth is to “diffuse the knowledge of the personality and role of Mary of Nazareth, in order to contribute to the establishment of peace among communities… among people of all races, of every culture, and of every civilization.” He explains: “We wish to explain Mary, to explain the Christian faith via multimedia, in a way which is both original and which employs the modern technical means at our disposal today. We saw early on that this tool did not exist to disseminate the faith… From the Jewish perspective, we received immense support when it became clear that we are presenting Mary as as a Jewish woman, the daughter of Zion, as she existed in this culture and among this people. The entire multimedia production has been made with Jews working on the lighting, the sound, the footage…” Bonnassies concludes: “The first goal for us is the New Evangelization: how to find ways to present the faith to people today.”

Various images of Mary, from beautiful woman, to Sacred Heart, to Queen of Heaven,
to nurturer of the infant Jesus, to desconsolate mother.

It is clear that the Catholic Church has recently made an executive decision at a high level to emphasize the figure of Mary. The reasons are in order to proselytize and, ultimately, to assimilate. The Church has recognized that the figure of Mary can be a bridge in many directions and to many faiths. After all, she was a good Jew (hence the emphasis in Multimedia show 1 of her discovery of the Torah). Secondly, she is revered by all sects of both Christians and Muslims. Thirdly, her loving attributes as a mother are universally respected. In sum—and concurrent with the replacement of Pope Benedict VI by the more “friendly” Pope Francis—the Church has adopted the welcoming and non-threatening figure of Mary as its preferred “face” to the world. It is no surprise that on the Aleteia front page we find Pope Francis declaring that “If You Don’t Want Mary As Your Mother, You Shall Have Her As Your Stepmother!” and that EWTN, the Catholic news network, offers a “Theology Roundtable: Mariology.”

Aleteia presents so much (pseudo-)information that one can easily get lost. For some reason, I quickly browsed to a story entitled “Satan, the Father of Cheap Christianity”. Perhaps the words “Cheap Christianity” caught my eye. It is a rambling screed ostensibly focusing on the Black Mass recently proposed at Harvard University. The author (S. Herreid) informs us that the true Catholic mass is “a ritual largely made up of self-abasement, cries for mercy, and the praise of a just and fiercely loving God,” that “Hugo Chavez’s legacy was one of cruelty, corruption, and abuse,” and that “Hitler was entirely sincere about his plans to make the world a better place.” Talk about focus… He concludes: “If we don’t guard against the sinfulness and falsehoods of the World, then our ‘sincerity,’ and even our ‘Christianity’ is reduced to nothing more than perfume added to our bull.”

Well, I think he’s got the “perfume added to our bull” part right.