The peer review system is broken in Biblical Studies. Three scholars on both sides of the Atlantic have recently been unable to elicit a reasoned (not to mention appropriate or fair) evaluation of the Nazareth archaeological evidence from one of the most prestigious British journals in the field of Biblical Studies, the Palestine Exploration Quarterly. The scholars in question are Philip Davies, noted “minimalist” at the University of Sheffield; Frank Zindler, biblical researcher and past president of American Atheists; and yours truly, René Salm, manager of this website and author of The Myth of Nazareth: The Invented Town of Jesus.

Readers of my nazarethmyth website will know that for some years I have contested Ken Dark’s work at Nazareth. Dark is a British archaeologist who fairly late in his professional career has involved himself in Palestine archaeology. His most sustained work has been at the Sisters of Nazareth Convent site, not far from the Church of the Annunciation. Not only does Dark contravene the work of prior archaeologists at that site, but I claim he makes errors of a rather elementary nature (below) and that his conclusions regarding that site specifically and Nazareth in general can be characterized as embarrassingly unprofessional and even fabulous.

First, the background… In November, 2012 I presented a paper on Nazareth archaeology at the annual convention of the Society of Biblical Literature in Chicago. While there I visited the Regenstein Library—the only repository in North America to possess a copy of Ken Dark’s four interim reports on the Sisters of Nazareth Convent site. I photocopied the reports, brought them back to Eugene for study, and eventually wrote “A Critique of Dr. Ken Dark’s writings relative to the Sisters of Nazareth convent.” An expanded version will be Chapter 11 of my forthcoming book, NazarethGate (American Atheist Press, end of 2015). While I was writing the Critique, Frank Zindler forwarded me an email from emeritus Professor Philip Davies in England, who wrote him as follows:

The book review alluded to above is the one I long ago responded to here (scroll down to #10). The following day I sent Prof. Davies a fairly lengthy email in which I wrote: “Dark is a specialist in Roman Britain and  seems to be surprisingly unacquainted with fundamentals of Galilean archaeology. For example, he simply uses Judean chronologies, not realizing that as much as 250 years separated the first appearance of kokh tombs in Jerusalem and Nazareth. This methodology is most convenient for the tradition, which depends on an impossibly early dating for the lion’s share of both structural and movable evidence from Roman Nazareth…” I also advised Davies of my forthcoming book which will devote a chapter to Dark’s work.

In early October I sent Davies the completed draft of Chapter 11 as a digital attachment. In the cover email I wrote: 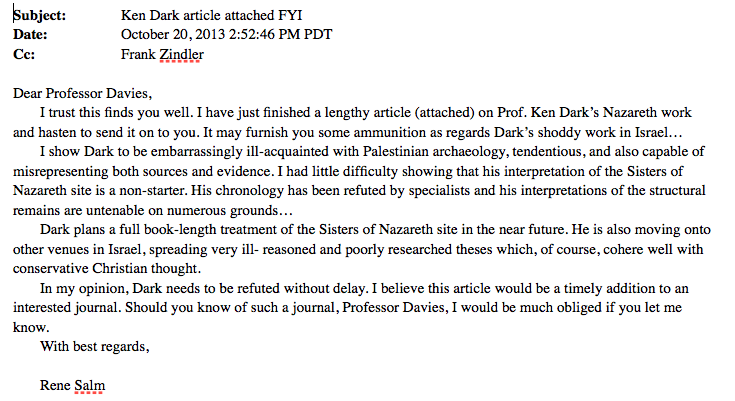 Frank also handed Davies a hardcopy of my Critique at the SBL convention that November. Several months later Davies emailed:

Davies did not change the substance of the argument, but shortened the chapter and edited it in such a way that it was now an “article” amenable to publication in a journal dedicated to Biblical Studies. He also toned down the language somewhat. Obviously, Davies considered the subject matter significant enough to spend “a lot of time” working on my piece. This, his sparring with Dark (above), and his position regarding Dark’s eventual book—these facts now place Davies squarely in the middle of the Salm-Dark controversy over Nazareth archaeology.

Frank responded: “Dear Philip–Franx thanx for the hard work and devoted attention you have given to René’s paper. You are a valued and cherished friend. René has made some extremely important new discoveries pertaining to this case that bid fair to blow the whole thing out of the water… Frank”

I thanked Philip for his work and recommendation to submit to the Palestine Exploration Quarterly (PEQ), and immediately set about further abridging the article and conforming it to the exacting presentation standards of the journal. I engaged a professional graphic designer for the illustrations. In all, the article went through numerous rewrites on both sides of the Atlantic (though Davies did not review it again). I have never worked harder on a piece and considered it ‘tight.’ After the many rewrites I finally sent it off to PEQ on March 13.

In the complex PEQ submission form was a section inviting me to suggest peers to review the article. At the time, I considered this a thoughtful, even friendly touch—little did I suspect how cynically the peer review process, in my case, would be treated by the well-known journal. I suggested the following scholars, all familiar with my work: Philip Davies, Thomas Thompson, Robert Eisenman, Hector Avalos, Joan Taylor, and Hans-Peter Kuhnen.

The Editor of PEQ (David Jacobson) acknowledged reception, and for two months Philip, Frank, and I waited while the British journal went through its peer review process. Of course, we knew that the article’s content would be provocative. Yet we also felt that the journal would have a hard time rejecting it on content or formal grounds.

If there were difficulty, it would be political. After all, I am bucking the received tradition. Then again, I am an uncredentialed outsider, one seeking to show that a well-published professor and a working archaeologist in the field (Ken Dark) is responsible for shoddy work at Nazareth, work which invariably supports a traditionalist view of the settlement’s history.

Two months passed before I received a terse email from David Jacobson. PEQ had rejected my article.

I was not particularly surprised, for the submission must have produced consternation among readers in England. Yet, for several days I refused to open the PEQ “Reviewer Report” attachment, feeling it would only rub salt in the wound and could only confirm my cynicism regarding Biblical Studies. (In fact, I was correct on both counts.) I relayed the news to Philip and Frank, who both expressed surprise and disappointment:

I told Philip and Frank that I didn’t care to read the Reviewer Report myself just yet, and now sent it along to them both in the form of an email attachment. Philip quickly emailed back: 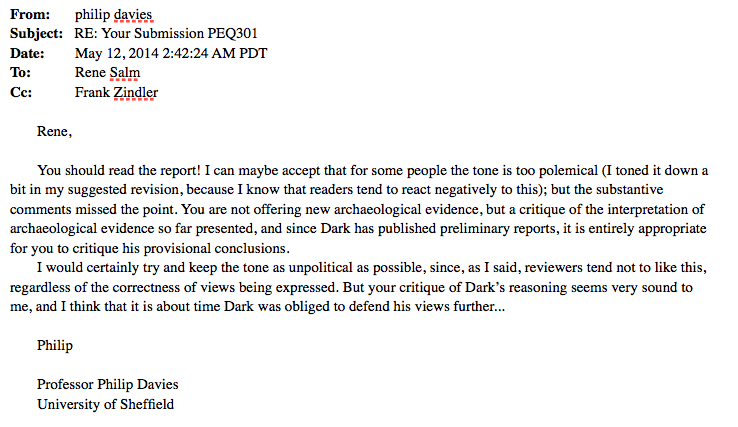 Frank wrote: “… I’m still marveling at the outrageous reviewer’s report. Given the billions of dollars that are at stake, however, how could they have done otherwise? Their only hope is the time-honored one: suppress expression as much as possible and then ignore what you can’t suppress.–Frank”

After a few days I finally had the stomach to read the PEQ Reviewer Report. I was shocked to see that there was only one reviewer, that he was clearly hostile, and that he had missed the substance of my argument (or did not understand it). Not one of the six scholars I had suggested was appointed to the review committee, and I could only wonder why I had been invited to suggest reviewers in the first place. A friend—himself a credentialed scholar who has authored several books and numerous articles in the Biblical Studies field—told me that sometimes journals fudge a little and farm out less respected submissions to one or more graduate students. Whether or not this was the case here, it was quickly clear to me that the PEQ never had the intention of treating my views in anything like a fair manner, and that the whole process had been a set-up from the start. The enormous energy I (and Philip) had invested in the article was a foreordained waste. In sum, what I was reading made a mockery of ‘peer review,’ a system ostensibly designed to avoid preconceived conclusions and ‘political’ decision-making in scholarly publication.

I had no trouble penning a quick reaction and replied to Philip and Frank in no uncertain terms: “The PEQ reviewer report of my article is appalling. I expected more from that journal. My specific comments are below. It’s obvious to me that this is not an even-handed review but is a foreordained hatchet job. Consider: I suggested half a dozen reviewers—none of whom would have written such a review as this. You, Philip, were at the top of my list of peer reviewers. Instead, PEQ chose a single hostile reviewer who did not even take the time to acquaint himself with my argument. It is atrocious!”

The PEQ Reviewer Report, including my reactions, will be in the next post.—René Salm