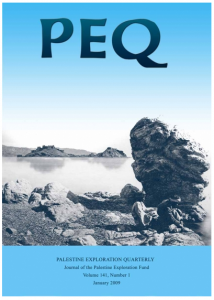 My preceding post reviewed the background involved in submitting an article to the prestigious British journal, the Palestine Exploration Quarterly (PEQ). That article deals with Ken Dark’s adventurous conclusions regarding the Sisters of Nazareth Convent site, and with his several “interim” publications relative to the site. The Sisters of Nazareth Convent is about one hundred meters from the Church of the Annunciation. It has long been known that kokh-type tombs are on the premises (one with a surviving rolling stone), as well as above-ground structural remains.

Dark proposes a novel and complex theory which my article shows to be totally indefensible. He argues that an habitation was constructed on the site, that it was abandoned, and that the site was then used for a tomb. Furthermore, he claims that all this activity took place within the first century CE. I point out in my article that the notion of Jews hewing a tomb under a former dwelling is elsewhere undocumented and more than a little curious. I also point out that the site is too steep to have permitted a dwelling in ancient times, that the structural remains (cisterns, low and roughly-hewn walling, etc.) strongly suggest an agricultural installation and not an habitation, and that the tomb clearly preceded some of the agricultural elements (e.g. onsite filtration basins). Without getting into a detailed argument here, I furthermore show that Dark uses a very false terminus ante quem (100 CE) for the end of kokh-tomb use (they continued in use to c. 500 CE), and that he blithely extrapolates Judean datings to the Galilee without further ado—thus he does violence not only to his own results but to the intentions of other scholars (R. Hachlili, M. Aviam) who never intended their work to be so misused. In sum, I conclude that Dark is regrettably unacquainted with fundamentals of Palestinian archaeology. This perhaps owes to his coming to the field rather late in his professional career, for Dark is primarily known for his work on Roman Britain.

My article on the Sisters of Nazareth Convent site will appear as a chapter in the forthcoming book, NazarethGate. [Published 2015.] However, at the suggestion of the British scholar Philip Davies (University of Sheffield), I submitted a carefully labored draft to the PEQ in March of this year. As my previous post shows, Davies himself edited the article at one stage, shortening it and somewhat toning down the rhetoric. I then subjected the article to further rewrites, engaged a professional graphic designer for the illustrations, meticulously followed PEQ’s complex formatting requirements, and finally submitted the article to the journal.

It is in this light that I am totally put off by PEQ’s unsatisfactory response. I don’t care to go into details, for this is after all only the backstory of a single rejected journal article. But not too many of my readers know much about the august “peer review” process, beyond the facts that it is held up as an unbiased way to screen submissions prior to academic publication. This has also been my view. Unfortunately, however, we need to think again.

Clicking on the image at right brings up a readable enlargement of the PEQ Reviewer Report. The first thing that struck me is that there is only one report. I had thought that several scholars would evaluate the submission. It seems to me that at least three would be required to remove the possibility of a single biased voice carrying the whole weight of the review. Yet the latter case is precisely what seems to have transpired with my article.

The second thing I noticed is that the reviewer in question is unabashedly hostile. In my article submission I named no less than six scholars (see preceding post) as potential reviewers. Not one of them is hostile to my research and would have written a review such as this. They would have understood the substance of my article better than did this reviewer. Obviously, none of my suggested reviewers was tapped for the job. Why not?

Thirdly, the reviewer obviously expended little effort in this single page report which sometimes comments ascerbically with a single word: “No.” This is not serious, and by omitting any reasons in these cases the reviewer betrays either a lack of interest or the inability to furnish reasons. In either case this is unsatisfactory. Not only is the Reviewer Report not serious, but it complements the entire PEQ process of handling this submission in an unprofessional way. This is hardly what one expects from a fair and thoughtful review of what is, after all, a substantial and carefully written article of 13,000 words.

The only point where I think the reviewer may have some merit is the third category, where he writes: “The arguments and interpretation tend to be very polemical. The style of this paper does not suit an academic journal, being more appropriate to a popular magazine.” So, even after some ‘toning down’ by Philip Davies, the reviewer still found the article too polemical. Okay. But I suggest we may here have signs of a larger issue: today’s reader of PEQ (the average credentialed scholar and scholar-to-be) is simply not ready for a reasoned and direct challenge to Nazareth archaeology, a challenge pregnant with serious consequences for the received tradition. This, I submit, is what caused the reviewer to balk at my article. After all, how does one find an interpretation too “polemical”? Is this not a tacit admission that the interpretation itself is off the table and simply unacceptable?

As to perceived tone, this can appear far more polemical if the reader is out of sympathy with the content, and particularly if he finds that content threatening. I suspect these factors are in play here. A Jesus mythicist will not find my article particularly polemical. It is well reasoned, to the point, and does not pull any punches.

The next category (“Are there any errors of fact or omissions of importance?”) requires some detailed rebuttal. The reviewer writes:

No archaeological context is presented – no pottery, coins, stratigraphy, photographs, etc. are tabled and discussed. The argumentation verges on the vexatious and personal level.

This is astonishingly inaccurate. I discuss the pottery in extenso in my article (“Section 5. Ceramic and movable evidence,” pp. 13–15).

Regarding coins, none are germane to the discussion. No pre-Byzantine coins have been published from the site, and hence I do not discuss them. In one place Dark mentions a small museum at the site and vaguely notes that it houses “Roman-period, Byzantine and Crusader coins, metalwork, pottery, glass and Byzantine and Crusader architectural stonework, such as column capitals and column shafts.” In my article I discuss the unreliability of depending on such thoroughly unprovenanced artifacts, noting that Dark himself admits that “most of the museum artifacts lack any sort of identifying label.” Surely, we cannot use those artifacts (which could have come to the museum from anywhere) as reliable evidence for the Sisters of Nazareth site.

As for stratigraphy, no such discussion is applicable because no controlled excavation using stratigraphy has been conducted at the site (much less published). In passing, Dark notes that an assistant drew up an unpublished “independent report on all the stratified pottery from the convent.” However, such pottery cannot be considered “stratified” in the absence of any prior stratigraphic excavation.

As to photographs, their inclusion in my article would serve no purpose. In any case, all the published photos from the site are copyrighted by the Custodia di Terra Santa or by Dark himself, and I am certainly not in a position to ask them for permission to duplicate material which, in any case, is of no value to my argument.

I would suggest that the reviewer’s final sentence regarding “vexatious” and “personal” once again hearkens back to his own stance regarding the content. This suggests to me that he should not have been selected to review my article in the first place—its content obviously vexes him!

The reviewer is also barking up the wrong tree. He is reviewing my position vis-a-vis the archaeology of the Sisters of Nazareth convent while he should be reviewing something else: my critique of Ken Dark’s work. His job is to determine whether my critique is valid or not. The reviewer has not grasped this distinction.

The only substantial item is the segment of a kochim tomb which probably predates the structures above, but that might date from Herod the Great to that of Bar Kochba.

Here the reviewer himself invalidates Dark’s argument and vindicates mine. After all, Dark’s fundamental misconception is that the above-ground structure precedes the tomb. If the tomb “probably predates the structures above” (in the reviewer’s words), then the structure does not date to the first century CE and, with that admission, Dark’s entire scenario implodes. Thus the reviewer sells the farm but he does not seem to realize this. Dark went even farther and proposed that the habitation-tomb sequence occurred at multiple sites on the Nazareth hillside. Thus Dark wishes to show the existence of “Nazareth” at an early time—before the hewing of the tombs. All this is unfounded though, as the reviewer himself reveals. These comments by the reviewer show that he has not thought the matter through. The entire tenor of his comments also shows him to be somewhat unfamiliar with the subject matter at hand. If that is true, then why was he chosen to do this review?

In short, too much steam is generated over very little true archaeology.

This polemical remark is not consistent with the reviewer’s own preceding remarks (which vindicate my argument).

The  author ought to wait for more archaeological artefacts to be presented, and perhaps for the final report of Ken Dark’s excavations before launching a critique.

No. Dark has already published a thoroughgoing view of the site (in the Antiquities Journal, 2012) in which he details an indefensible chronology, an embarrassingly poor methodology (quite overlooked by the reviewer) which relies on irrelevant Judean rather than relevant Galilean data, and an unsupportable domestic-funereal sequence for the site. There is nothing to recommend Dark’s view—as I expose in my article.

In all, this PEQ debacle shows that mythicists must treat the vaunted “peer review” system with a big grain of salt. It is certainly not the august, necessary, or even accurate measure of quality as commonly claimed. Of course, my case is non-standard, for it is not often that a journal such as PEQ receives such controversial material, subject matter which is furthermore from an outsider—from one not within the professorial guild nor even lettered with the customary credentials. Nevertheless, it is precisely in such cases that the peer review system is supposed to ensure a fair and serious, reasoned and scholarly treatment. The above emphatically shows this not to be the case. I fear that not only myself, but mythicism in general, is (and will continue to be) the victim of such scholarly hatchet treatment. The mythicist challenge may expect further crass assessments which have no intention of being “fair and serious, reasoned and scholarly.”

This peer review aberration is simply another example of why the field of Biblical Studies has, in the words of Philip Davies, still a long way to go before it reaches “academic respectability.” — René Salm