This is to alert readers to the upcoming anthology, “Christianity in the Light of Science: Critically Examining the World’s Largest Religion” (Prometheus Books, Fall 2016), edited by John W. Loftus. One of the chapters is by yours truly. About a year ago John emailed me the following all-inclusive message: “I’m looking for authors to write chapters on cosmology, evolution, how evolution impacts Christianity, the scientific method, the Bethlehem star, biblical archeology, the existence of Nazareth at the time Jesus, the genetics of the virgin birth, biblical prophesy, the shroud of Turin, miracles and science, the existence of God and the task of science, the origins of the religious impulse…”

My contributory chapter is now complete and delivered: “Pious Fraud at Nazareth.” It touches on the results of my most recent book NazarethGate and then asks an important question: “As we approach the end of our unflattering review of the history of Nazareth archaeology, we must ask: Are the above frequent and sometimes inexplicable irregularities merely the result of sloppiness, of information overlooked, and of imperfect knowledge?” The answer I give is a resounding “No!” The archeology of Nazareth—so typical of “Christian archeology” in Israel—goes beyond the realm of provable error, casual admission of hearsay (by well-trained scholars!), and internal contradiction, into an area patently characterized by suppressed evidence, invention, and fraud. In fact, that statement, in a nutshell, captures the results of my entire twenty years’ work in the field.

The anthology’s contents are: 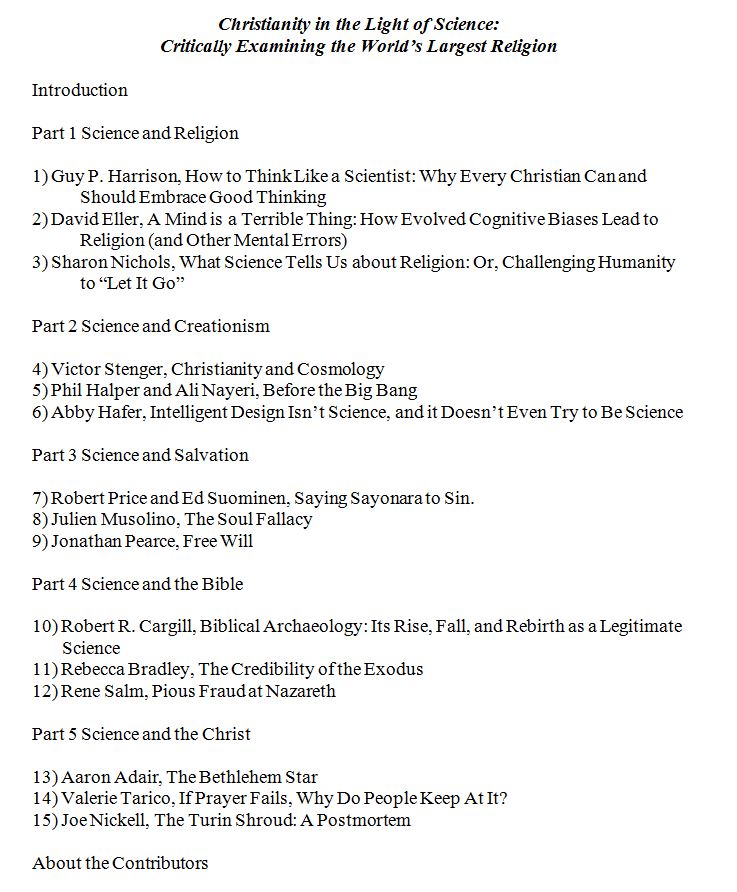 I very much look forward to these exciting chapters, and am especially interested in what the late Victor Stenger writes about “Christianity and Cosmology,” what Rebecca Bradley (Ph.D, Archaeology, Cambridge, U.K.) has to say about “The Credibility of the Exodus,” and what Robert Cargill writes regarding “Biblical Archaeology: Its Rise, Fall, and Rebirth as a Legitimate Science.” Yes, let’s certainly hope that biblical archaeology experiences such a “rebirth.” Tomorrow would not be soon enough!—R.S.