The recent lawsuit against the rather notorious Christian apologist J.P. Holding (aka Robert Turkel)—whose tone and language have been anything but “Christian”—gives me an opportunity to invoke a little Buddhist ethics by applauding this recent manifestation of the mighty law of karma: what goes around comes around or, if you prefer, ‘as you do unto others, so also it will be done to you’ (cf. Mt 7:12 etc). It appears that Holding has been rather egregiously abusing the Golden Rule since the inception of his “Tekton Ministries” (a play on the Greek for “carpenter”?), and that the spiritual law of karma—more subtle than air and more predictable (IMHO) than the law of gravity—suddenly struck. As a result, the Tekton Apologetics Ministries has been brought to its knees and must suspend all upcoming projects. 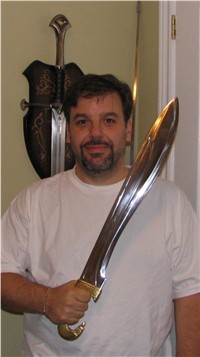 The lawsuit for libel (what else?) has already cost Holding $8,000, and it appears that it may cost him a great deal more… 19 others are also being sued by an “atheist” who, as yet, is not identified. Holding is urgently seeking donations and writes, “I will not be adding any more to the Ticker for a while.” All this comes in difficult times for him: “This past year (2015) saw a major crisis in our household which presented us with a real danger to Tekton’s livelihood. My wife lost her job at the end of June, and for a few weeks, Tekton was our main means of support.” When it rains, it pours…

I don’t relish anyone’s misfortune, but in this case note that these reverses are probably a signal from the great beyond that Holding needs to jettison what most level-headed people would call plain wrong—or what a Buddhist like me might call karmically self-destructive. Also, I personally have an iron in the fire: Turkel/Holding has greatly misrepresented and (equally greatly) disparaged my Nazareth work, under the rubric Rene Salm’s Nazareth Miss. Holding lives in Florida, and shortly after the 2008 publication of my first book, The Myth of Nazareth, he sat down with Dr. James Strange (emeritus professor at the Univ. of South Florida), an archeologist who has published a great deal of (provably misleading) information on Nazareth. Holding and Strange may have made rather too light of my work, but I find it enormously ironic and also fairly humorous that the main accusation against me was ‘dishonesty’—of all things. I doubt Holding has read my books (with any attention, at least) for, if he had, he would be quite aware that I am inordinately scrupulous as regards accuracy and attention to facts that can be verified. At the same time, I am scrupulously dismissive of claims that cannot be verified. In any research endeavor, is there a better definition of “honesty” than such faithfulness to verifiable facts?

On the other hand, my research has revealed considerable dishonesty among biblical archeologists working in Israel. The demand for verification is actually the only means we really have to combat such dishonesty in the field. To accuse me of dishonesty appears to be the reflexive ploy of a desperate tradition, a tradition in biblical archeology that has been caught with its hand in the cookie jar.

Towards the middle of Holding’s above-linked screed against my book, my (alleged) penchant for dishonesty grows into “reckless dishonesty” and “Salm’s past record of dishonesty” (emphasis added). Such embroidery is simply par for the course. Holding often whips up similar accusations against those he dislikes—some not even mythicists, as when he labels Bart Ehrman full of “deceit and cunning.” Oh well.

Holding also notes my “lack of courtesy to scholars” and my “intemperate remarks”—as if being a working scholar (i.e., at a college or university) grants immunity to say whatever one wishes, irrespective of evidence. Of course, it doesn’t. And here I think we come to an issue that really grates on the ‘tradition’ (including most working biblical scholars): they depend on deference, on ‘collegiality,’ on rubbing each other’s back (mostly in print). They depend on the O.K. of Church, synagogue, and state in order to get those all-important publishing contracts, invitations to conferences, and prestigious appointments. And that O.K. comes only if a scholar defers not only to the right people but also to the right theories.

Deference in academic biblical studies is more than just window dressing. It is a critical part of the job in a shrinking field which today is witnessing the multiplication of theories. If deference is not proffered, a biblical scholar is offended and perhaps disoriented. S/he is also vulnerable. Those who are used to playing the game of “teach only accepted dogma” and “defer only to accepted theory” are woefully unprepared to play the game of facts—or, if you allow, truth. Hey, when tenure is at stake, facts can receive short shrift indeed… 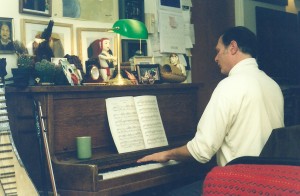 René Salm at the piano
(Click on photo to listen)

As readers of my work are aware, I do not defer to scholars. I never have. To me, biblical studies is a little like music—it’s a love. I don’t do this for money. My books have made little money and, indeed, have probably cost me an arm and a leg in time and effort expended. And it rankles me a little that people would take money for something as important as the meaning of life (which is my definition of “religion”), something they should be investigating anyway even without a penny in recompense. To me, it cheapens religion when someone uses it to pay a mortgage, to travel, to publish, whatever… That’s where “amateur” becomes a beautiful word. I do this for the love of it. And that’s why I can talk on an equal level with anyone in the field of biblical studies—because I care very deeply about the subject matter, so deeply that I do it even though I’m not paid. Now, how many academics do you know who can say that?

For myself, at least, scholars neither walk on water nor stand on a pedestal. Mine is an admittedly rare attitude—but I wish it were more common. Scholars are often disconcerted at my irreverence, though laypeople generally find it refreshing. The point, however, is not the one nor the other but objectivity—something critical to any research. I have found that, more often than not, ‘biblical archeologists’ working at Nazareth have betrayed the evidence in front of their very eyes in order to accommodate prevailing dogma, tourism interests in Israel, and/or their own reputations. I have called them out on this, chapter and verse. And for that I have been called “dishonest” by rabid apologists like Holding.

The shoe is on the other foot: no shortage of accusations of dishonesty have been directed against Holding himself… Here, I merely direct the reader to a long post with myriad sublinks to his various confabulations. It is not pretty reading.

In the next post I’ll consider further aspects of the current polarization in biblical studies, and some implications for Jesus mythicists.—R.S.