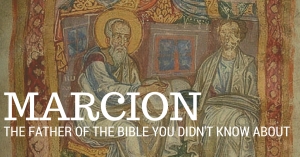 In a prior post we began looking at the increasing evidence that the New Testament is a product of the second century, rather than the first. We continue now by examining the role that the arch-heretic Marcion of Pontus played in gospel formation, a role that is becoming ever more astonishing as scholars finally realize that Marcion is certainly implicated in the earliest stratum of canonical gospel formation. That stratum is normally associated with the Gospel of Mark. Can there be any historical connection here between the names “Mark” and “Marcion”? If so, how ironic that would be, since one is a Christian hero and the other an arch-villain!

No gospel is mentioned by the Church Fathers before the appearance of Marcion’s “gospel” (read: “doctrine,” evangelion in the broad sense) in the first half of the second century. Marcion evidently brought his doctrines to Rome in the early 140s CE, along with a great sum of money that he gifted the Church. His doctrines included belief in a distant, superior God who had nothing to do with the creation. Jesus was the son of that distant divinity. Marcion’s money was at first accepted, only soon to be returned. This reversal signals an irreconcilable breach in relations. Marcion was eventually excommunicated, and so we know that the breach must have been on theological grounds. Indeed, from the Catholic perspective something was very wrong with Marcion’s gospel/doctrine. Nevertheless, it appears that the Church ‘adapted’ it (below). In rather quick succession, the Gospels known to us as Mark, Matthew, Luke, and John appeared. These were ‘sanitized’ versions of Marcion’s thought. They were also the textual gospels with which we are familiar from the New Testament, “gospels” more in accord with Catholic doctrine.

What was it about Marcion’s theology that so upset the Church? In the previous post we signaled the major problems: (a) Marcion believed in two gods, an inferior creator god, and a superior “foreign” or “stranger” god who has nothing in common with our debased materiality. (b) As a result, Marcion rejected the Jewish law as being in service to the inferior creator god. Indeed, for Marcion, the entire creation is evil and a prison of the divine soul.

Marcion’s theology leads inevitably to a severe, ascetic and world-denying outlook. It was quickly deemed unacceptable to the Catholic Church which opted for a much more pleasing theology: the creation is good and (borrowing from Judaism) our bodies are “in the image and likeness of God” (Gen 1:26).

However, Marcion’s thought also contained some winning elements that were irresistible to the Church, and this is why his evangelion was ‘co-opted.’ One such Marcionite element was the concept that God redeemed mankind through the sacrificial death of his spiritual son. Thus, the focal point of redemption moved from the baptism (which had been into gnosis, symbolized by water) to the death of Jesus. In fact, Marcion did not invent this concept of the redeeming death of the savior (which is actually very ancient). It is also strongly present in the Pauline epistles, writings that predated Marcion (J. Clabeaux, A Lost Edition of The Letters of Paul, 1989:148).

A statue from Crete supposed to be that of Apollonius of Tyana. (Wikimedia commons.)

It is unclear to me whether Marcion invented (or knew) the stunning biography of Jesus the Nazarene. That biography, so evident already in the Gospel of Mark, may have been invented by the tradition in reaction to Marcionite thought. This makes a lot of sense when we realize (above) that the Church needed to combat the distant, all-loving God of Marcion. The best way to do that would be to make the Son of God a flesh-and-blood human being, and to furnish him with a mundane biography, full of down-to-earth details such as we read in the 4G.

The result was the “divine man” (Gk. theios aner) Jesus the Nazarene. His biography was probably influenced by the recent adventures of the peregrinating prophet Apollonius of Tyana (d. ca. 100 CE). In any case, the Roman Church must have been greatly shaken by Marcion’s astounding gospel. Preceding texts (like the Pauline epistles) know only a spiritual Jesus (to be discussed separately).

Despite the theological problems associated with it, Marcion’s thought was a potent threat that the Church needed to deal with. It did so by sanitizing Mcn—by removing the “two-god” theology, rehabilitating the creation, and by including the Jews in God’s plan. As mentioned above, Marcion was adapted/co-opted and became the principal source of the canonical gospels.

According to Tertullian and other, virtually all of Marcion’s thought/evangelion is found in the Gospel of Luke. This being the case, the Church needed to deny priority to Marcion—though it was quite aware of the heretic’s priority. The Church Fathers aggressively repudiated any claim Marcion might have to originality by asserting that his doctrine/evangelion was a “mutilation” of their own gospel, the Gospel of Luke. This is a natural ploy that the thief uses in the face of his victim and in the court: I had it first. Henceforth, Marcion was deemed completely unworthy of attention. This orthodox view of disparagement has endured into modern scholarship (e.g. Harnack), despite the scholarly recognition that Marcionite views are often considered more primitive than the views found in the various synoptic gospels.

The fact that no “gospel” is mentioned (much less attested) before the time of Marcion is also damning. It is only when we come to Irenaeus of Lyon and his Against Heresies (c. 180 CE) that the Gospel of Mark is mentioned for the first time (H. Raschke, Die Werkstatt des Markusevangelisten, Jena: Diederichs, 1924:33-34). Chronologically, then, Marcion appears to have preceded the first canonical gospel.

The new recognition of Marcion’s role at the ground level of the synoptic gospels (explored by M. Klinghardt and M. Vinzent only in the last ten years) will require, of course, a complete reformulation of the traditional relationship among the canonical gospels. If Marcion’s thought had anything to do with giving rise to our gospels, then the New Testament not only dates at least a half century later than is conventionally thought, but it also was born in reaction against a gnostic, ascetic (encratite), and world-denying arch-heretic.