In the last several posts we looked at Marcion’s critical role in early gospel formation, and at two recent scholarly views that propose a new synoptic paradigm: Marcion’s gospel predated all four canonical gospels. This includes the Gospel of Mark which, accordingly, now moves to the mid-second century CE.

Prof. Markus Vinzent, in particular, has proposed that it was Marcion of Pontus who, in the first half of the second century, ‘invented’ the figure of Jesus of Nazareth (more correctly: Jesus the Nazarene). Vinzent writes:

Marcion created a powerful narrative of a transcendent, pre-existing figure who appeared on this alien earth, in the midst of history, to liberate human beings from these physical chains of ignorance, greed, law, sin, judgement and the need for repentance, to rescue humanity through buying men back by paying the price of death on the cross, through his descent to the utmost depths of hell, in order to save all who wanted to accept this helping hand, and to let them be where and what the Risen is. (Vinzent 2014:135)

Thus, the Sitz im Leben of the canonical gospels seems to be this: Marcion’s arriving in Rome in 139 CE with his new gospel precipitated (a) first a crisis in the Roman Church; then (b) Marcion’s excommunication; and finally (c) a frenzy of Christian writings whose intent was basically to ‘rewrite’ Marcion’s gospel for Catholic purposes. Some of these rewritings (i.e. our four familiar gospels) were eventually canonized, but others were never accepted, were eventually shunned by the Church, and were forgotten.

One question that now faces us is: If Vinzent is correct (and I, for one, think he is), then what preceded the theology of Marcion? And further: Are there any traces of that earlier, first century, theology?

In this post we begin to answer those questions affirmatively. We will find that yes, indeed, there was a vibrant theology of ‘Jesus’ that preceded the one Christians currently know. And, yes, traces survive of that theology. Some of those traces have been before us all along—in the Pauline epistles. They point to a Jesus who was not of Nazareth/a Nazarene—nor even of flesh—but who (or ‘which’) was entirely spiritual.

The above analysis, if correct, provides us with a powerful tool with which to differentiate two major stages in the Christian religion: an earlier, first century stage in which ‘Jesus’ is a purely spiritual (and also ‘mobile’) entity; and a later, second century stage in which ‘Jesus’ is associated with flesh and, indeed, with the flesh of a unique god-man: the ‘Nazarene’/person from Nazareth. 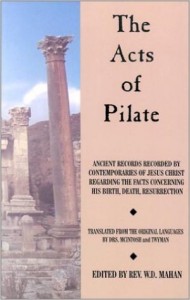 The Acts of Pilate

Justin Martyr, writing in the mid-second century CE, refers twice (First Apology c. 35 & 48) to documents of the trial of Jesus before Pilate. He must have been referring either to the Acts of Pilate or to closely related works that were long ago destroyed. The Acts of Pilate (AcPil) survives in Greek, Latin, Coptic, Syriac, and Armenian versions (for critical introduction and text see Schneemelcher, New Testament Apocrypha 1991, I:501 f). Even a cursory reading of the work reveals why it was not admitted into the Church: it’s conception of “Jesus” is highly unorthodox.

The author of AcPil was clearly familiar with traditions in the New Testament. For example, he knows the (comparatively late) birth story in GMt, including the death of the children of Bethlehem and the flight into Egypt (AcPil 2.3; 9.3). Additionally, the work has many points of contact with the synoptic gospels. These elements may have been added later in order to conform an older text to the new theology of Jesus the Nazarene (‘Nazarene’ and ‘Nazareth’ do not appear even once in the Gospel of Nicodemus). Thus, a clash of theologies is witnessed in the text. Indeed, that clash may have informed its editing, because the AcPil, as we possess it, is uncertain and greatly preoccupied regarding the nature of Jesus.

Most of the versions of AcPil that we possess have a prologue stating it was written down in 425 CE by one “Ananias, an officer of the guard, being learned in the [Jewish] law.” Ananias claims he translated the larger work (the Gospel of Nicodemus) from Hebrew into Greek and that the original Hebrew text was written by Nicodemus—the same figure who plays a role in the ensuing account surrounding the death of Jesus. Though we have every reason to doubt that any part of the text goes back to c. 30 CE (the putative date of the crucifixion) as Ananias claims, it is very possible that AcPil (and the entire Gospel of Nicodemus) was composed in the middle of the second century CE, as part of the wave of rewritings following Marcion’s presentation of his gospel in Rome. It is also possible that AcPil reworked even older traditions, for its concept of “Jesus” has much in common with first century texts—including the Pauline epistles.

In short, the AcPil and entire Gospel of Nicodemus may have had a long transmission history before Ananias translated and wrote it down in the fifth century. Elements that obviously harken back to the New Testament may have been added to a much older work. Some late elements may have been added by Ananias himself.

The trial before Pilate 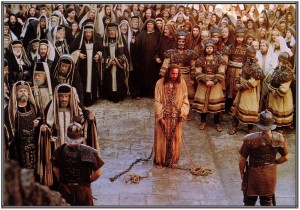 The Acts of Pilate (the online text is here) begins with the familiar judgement of Jesus before the “chief priests and scribes assembled in council.” Jesus is accused of healing on the Sabbath and of other “evil deeds.” Some naive miracles follow, such as the standards lowering (in homage) by themselves when Jesus enters the praetorium. In this case, “the Jews” accuse Jesus (1) of sorcery and (2) of being born of fornication. We know from other sources (e.g. the views of Celsus; rabbinic writings) that both these accusations were early and common. AcPil seems to combat them, e.g., by having twelve witnesses attest to Pilate: “We were present at the betrothal of Joseph and Mary.”

After extensive cross examination, Pilate finds no fault in Jesus. But at the insistence of “the Jews” he eventually hands Jesus over to them (AcPil 4.4; 9.4). At this point in the narrative a certain Jew, Nicodemus, comes forward and asks for a word with Pilate. “This man does many signs and wonders,” Nicodemus pleads. “Let him alone and contrive no evil against him.” Then, in words surprisingly similar to those Gamaliel spoke in the defense of Christians (Acts 5:38-39; cf. Cl. Rec. 65), Nicodemus says: “If the signs which he does are from God, they will stand; if they are from men, they will come to nothing.”

Jesus is crucified (AcPil 11.1). He “gives up the spirit” and the watching centurion immediately exclaims “This man was righteous.” The “multitudes” who saw the crucifixion then “beat their breasts.”

At this point Joseph of Arimathea enters the account (11.2). Indeed, the focus henceforth is on Joseph, not Jesus. If one thinks that the account until here was somewhat strange, it now takes on elements that one must find astonishing. 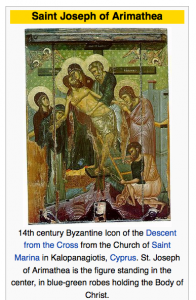 Pilate gives the body of Jesus over to Joseph, who places it in his tomb, “in which no one had ever yet been laid” (par. Lk 23:50–53). Joseph rolls the stone over the mouth of the tomb. [Aside: Archeologically, rolling stones for tomb closure were common only after the First Jewish Revolt. They were extremely rare before that time, per the work of Amos Kloner and other archeologists.] Surprisingly, “the Jews” find Joseph’s activity worthy of death, even as Jesus’ activity had merited the ultimate penalty. However, because “the sabbath dawns” they seize Joseph “and commanded him to be secured until the first day of the week.” They taunt Joseph: “We will give your flesh to the birds of the heaven” (12.1). But Joseph replies haughtily, as if he were divine: “This word is like that of the boastful Goliath, who insulted the living God…”

The Jews shut Joseph “in a building without a window, and guards remained at the door. And they sealed the door of the place where Joseph was shut up.” After the death of Jesus, then, Joseph was virtually entombed—at the same time (and place?) as the body of Jesus.

On the first day of the week “the whole multitude rose up early and took counsel in the synagogue by what death” they should kill Joseph (12.2). They commanded Joseph to be brought, but “when they opened the door they did not find him.” Of course, we are reminded of the women who went to the tomb of Jesus and did not find his body (Mk 16:6). “And all the people were astonished because they found the seals undamaged, and Caiaphas had the key.” 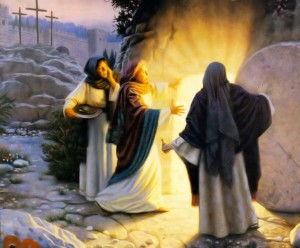 The action then shifts (13.1) to the site of Jesus’ tomb, which is on Joseph’s property. We learn that at midnight there had been a “great earthquake,” women were at Jesus’ tomb, an angel descended from heaven, rolled away the stone, and “shone like snow and like lightning.” The angel informs those present that Jesus is risen and is “in Galilee” (Mt 28:5–7).

“The Jews” then engage in an argument with the guards who, having witnessed the above strange happenings, are now ‘believers.’ The guards insist: “For he does live.” They taunt the Jews: “We have heard that you shut up him who asked for the body of Jesus, and sealed the door, and that when you opened it you did not find him. Therefore give us Joseph and we will give you Jesus.”

“Therefore give us Joseph and we will give you Jesus”? What a strange thing for the Roman guards to say… Of course, they would have been able to “give” Jesus only if they had received him first. And how would they have received Jesus if, per their request, they were only given Joseph? (Solution: Joseph is Jesus.)

The parallelism between Jesus and Joseph continues: the Jews say “Joseph has gone to his own city.” To which the guards retort: “And Jesus has risen… and is in Galilee.”

The Jews then bribe the Roman soldiers to simply say that they slept through the whole thing. Jesus is subsequently seen in Galilee on Mount Mamilch (14.1). Though the Jews don’t believe it, they still bribe those telling the report to keep quiet. Nicodemus then speaks before the Jewish leaders and persuades them to search on top of every mountain for Jesus. At this point appears perhaps the most incredible passage in the entire text:

And they told the elders and the priests and the Levites: “We went about to every mountain of Israel, and did not find Jesus. But Joseph we found in Arimathea.” And when they heard about Joseph, they rejoiced and gave glory to the God of Israel. And the rulers of the synagogue and the priests and the Levites took counsel how they should meet with Joseph, and they took a roll of papyrus and wrote to Joseph these words. “Peace be with you. We know that we have sinned against God and against you, and we have prayed to the God of Israel that you should condescend to come to your fathers and your children, because we are all troubled. For when we opened the door we did not find you. We know that we devised an evil plan against you; but the Lord helped you, and the Lord himself has brought to nothing our plan against you, honored father Joseph.” (14.2. Emphases added.)

Obviously, the attitude of the Jews towards Joseph has suddenly reversed 180 degrees. A day or two before, they wanted to kill him! Now, on finding him in Arimathea “they rejoiced and gave glory to the God of Israel”! Most revealing is that the most prestigious Jews in the land admit to having sinned against Joseph, someone who a couple of pages earlier (12.2) was merely “a certain man” and “a member of the council”!

Next: Pt. 2—Nicodemus is also “raised from the dead” →