The Nazarene is “the enlightened one”
(See also here.)

René: …Everything is showing that Marcion’s was in fact the first gospel and that Capernaum was the original hometown of Jesus.
The reason “Nazareth” was invented—that would be by Matthew, now, and taken up by Luke—is to change “the Nazarene,” because “Nazarene” was objectionable to the Catholic Church. “Nazarene” had some strong religious and theological meanings at the time, and it would be very valuable if scholarship looked seriously at this question, because this brings us to the heart of the issue: What does “Nazarene” mean? 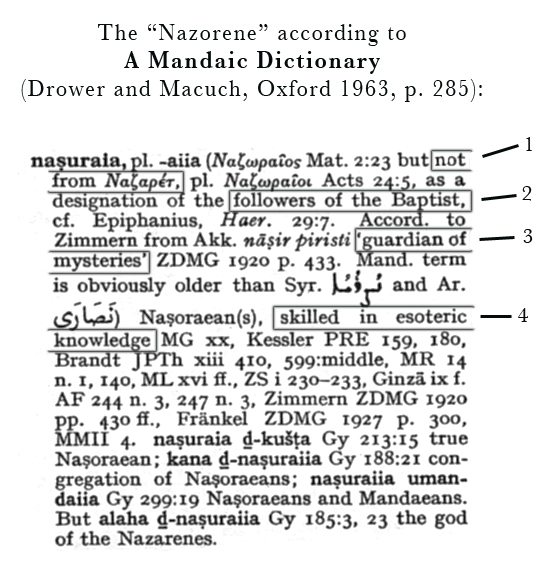 1. “Nazorene” and its cognates do not derive from the place-name “Nazareth.”
2. According to the Mandeans, the Nazarene was a follower of John the Baptist.
3 & 4. The Nazarene was a “guardian of mysteries” and
“skilled in esoteric knowledge.”

René: Jesus in the earliest gospels is called “Jesus the Nazarene.” But nobody seems to know what that meant. Now, “Nazarene” means the enlightened person, to use a Buddhist phrase. “Nazarene” is the “knower of secret knowledge” in the Mandaic religion, in Gnostic religions… Mandaism is a virtually unknown religion that some scholars maintain predated Christianity. Anyway, what I’m getting at is that if we could go back two thousand years, “Nazarene” would have had some very strong theological meanings when it comes to esoteric knowledge. Jesus is called “the Nazarene” in the earliest stratum of texts, and that was objectionable to the Catholics because they rejected any kind of salvation through secret knowledge, through wisdom, through “seek and ye shall find”—that’s a gnostic saying right there, you know. So you have Jesus of Nazareth saying “Believe in me and you will be saved”—that is what came later and replaced all this gnostic stuff. They replaced “Nazarene” with “Nazareth.”

Brian: So, are you saying, like, if this was in modern times, and we’re seeking wisdom, and I’m going to create a myth, and I would name the town, like, “Wisdomville”? Is that like what you’re saying? That “Nazareth” comes from the word meaning “to gain knowledge”?

[40’] René: Well, no. I mean, if you want to get away from this wisdom theology, you would name the town not “Wisdomville” but [something like] “Wiseackerville.” Nazareth and Nazarene have really nothing to do with each other. One’s in Greek and one’s in Semitic. By this time the Church was moving away from the Semitic into the Greek, and there were very few Greeks who spoke Semitic and who would know the relationship. But you did have all these competing religions at the time, these competing factions that were very favorable to the term “Nazarene”—which was central to their religion. These were competition, because the Catholic Church was still very small.

René: Yeah, there’s a lot of confusion there… But [the Church] wanted to get away from “Nazarene,” the whole theology of it. So they had Jesus coming from a place called Nazareth—which is totally bogus, totally new. And they also invented the character “Jesus of Nazareth” with all the miracles, and strutting around the Galilee and all that…

René: I just want to say, before we run out of time, that in the last chapter of my book [NazarethGate] I devote about seventy-five pages to my own impressions of the history of what happened. You see, I’m a mythicist—I believe that Jesus of Nazareth did not exist. But I also believe there was a prophet around that time who did exist and who inspired all this. But, before you go, “Oh, he’s waffling… He’s not a mythicist!” I just want to say that this prophet, in my opinion, had nothing at all to do with Jesus of Nazareth. In fact, he lived about one hundred years earlier, in the time of Alexander Jannaeus, who was a Hasmonean king.
There are records of this prophet in Jewish writings, in the Talmud. He’s called Yeshu ha-Notsri. That should ring a bell, because it’s exactly the same name as “Jesus the Nazarene.” Yeshu is “Joshua”—a very common name back then. And it does mean “savior”—that may or may not be a coincidence. “Ha-Notsri” is the same root as natsar, which we have in the Mandaic religion (the “keeper of secret knowledge”). It’s the very same name. Now the “ha-Notsri” part is an addition—it wasn’t his real name, of course. And, in fact, “Yeshu” may not have been his name. But this is the name that we have in Jewish records.
So, this very interesting man was a Pharisee. He was a very well educated Pharisee. He had to flee Palestine when Alexander Jannaeus, the king, had a pogrom against the Pharisees. In fact, Jannaeus crucified about 800 Pharisees at one time. So there was a real eradication attempt against the Pharisees about 94 BCE. Well, the young man, Yeshu ha-Notsri and his teacher—a man by the name of Perachiah, who was the head Pharisee in all of Israel—fled to Alexandria, Egypt, along with a group of them. They were not able to go back to Israel until Jannaeus died. So that’s about twenty years that Yeshu was probably in the city of Alexandria.
But something happened in Egypt. Yeshu rejected the Jewish religion. He was excommunicated by Perachiah. However, he went back to Israel anyway, and it seems like he had a big following there. He gathered people around him, he taught. He was eventually caught, and he was executed. He was strung up—either crucified, or stoned and then strung up. That’s the traditional Jewish way to do it. You know, you hang the body on a beam of some kind. So, anyway, there are many parallels with the story of Jesus. 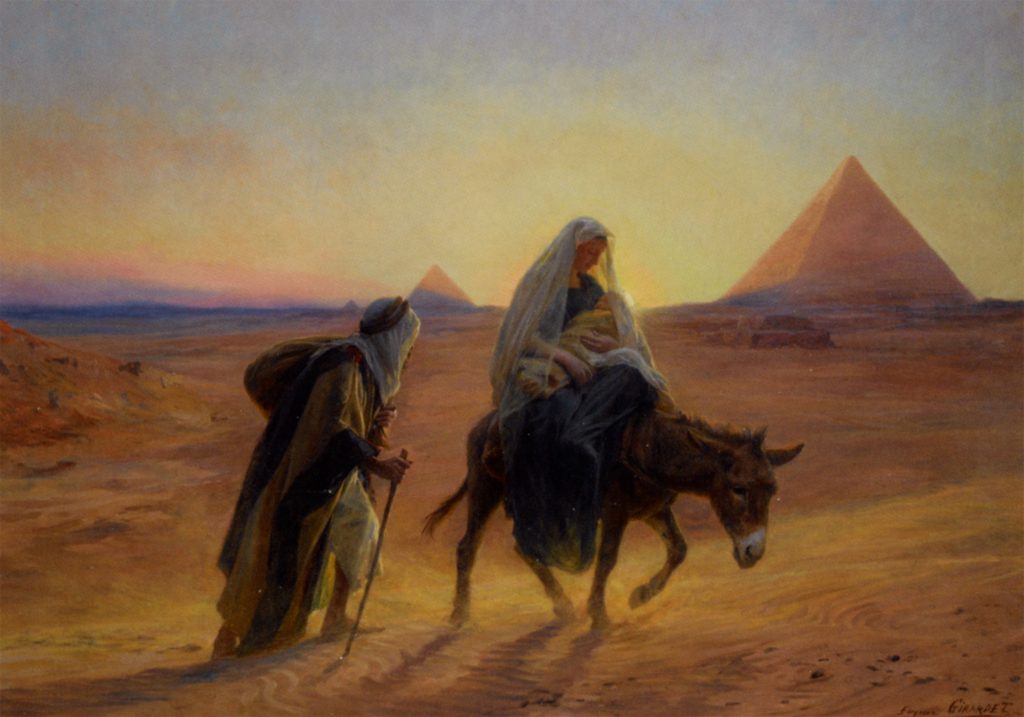 The Flight Into Egypt by French artist Eugene-Alexis Girardet.
Did Christianity garble the memory of an earlier flight?

Brian: Right. Right. Like running to Alexandria, Egypt, to hide from Herod. I can see that parallel.

René: Yeah. There you go. Just enormous parallels. I explain them in my book as best I can within the space of one chapter. I will be exploring this further. The more I learn, the more sense it makes… I’m not the first person to come up with this idea, by the way. There was a book written by Alvar Ellegard called “Jesus One Hundred Years Before Christ.” It came out fifteen or twenty years ago. It’s not a new idea, but I think I’ve gone into more details than anyone else to date.

Rob: You’re listening to René Salm. It sounds like he’s got it all figured out. [Laughter.] You’re listening to the Mythicist Milwaukee Show. You’re invited to find us on YouTube, and “like” us on ITunes as well. Visit mythicistmilwaukee.com to find out how you can be a member and help us support the great work that we do here every week, bringing fascinating guests from the secular world to you via this podcast, as well as a fantastic debate series called “Buzz Belief” which will be resuming in October with the big one, between Bart Ehrman and Robert Price. So, please get online right now and making your arrangement to be there for that one, because you don’t want to miss what is sure to be a fascinating debate.
What I like about our guest today is that, unlike a lot of researchers who deny the existence of Jesus and talk about being mythicists, who talk about what’s missing and the lack of evidence, Rene’s actually come up with a replacement thesis, and one that makes a lot of sense, quite frankly. So, I appreciate that, and thanks for your work there, René. It’s great to see someone with an alternative.

René: Well, that’s precisely what motivated me to add that final Chapter 14 to the book. Because the first thirteen chapters are on the archeology of Nazareth… But then I thought, “Well, okay, René: Why are you just tearing this Christianity down? That’s not good.” I try to be a positive influence here… And so I offered something that’s constructive, that probably did happen, that probably did exist.

René: At risk of losing some of your listeners, I will put out a further step in my thinking. And that is, while Yeshu ha-Notsri spent all those years in Alexandria… You know, they had a famous library there. Alexandria was the center of the intellectual universe in Roman times, even more than Rome or Athens. Yeshu was being groomed for the Sanhedrin. It looks like he was very well educated. And if he were at all a curious person—and he must have been—he would have gone to that library and he would have encountered Buddhist sutras. The Buddhists had sent monks to Egypt—we know this from the records—around 250 BCE. At that time emperor Ashoka in India was very keen on expanding Buddhism and he sent monks to Egypt in the West and to other places. They had sutras with them—Buddhist writings.

At left is a Buddhist “book” on strips of palm leaves, bound with string through two holes.
The Buddhist sutra (“discourse”) at right is on thin slices of wood. The pages are kept in order and on top of one another by thin sticks, which go through two little holes. When not used, the sutra is wrapped in cloth and stored in the box.

It’s my impression from reading the gospels that we have—including the Gospel of Thomas, by the way—that whoever said those sayings and parables had to be very sympathetic to Buddhism and probably had to be more than a little acquainted with it. I’ve also written a book that is online called “Buddhist and Christian Parallels.” It puts the Christian sayings on one side of the page, and the Buddhist sayings on the other. There are 57 different topics where they mirror each other very closely. If you look at these core materials, the heart of both religions seems to be the doctrine we call “karma.” You know: you will reap as you sow. As you treat others you will be treated. Jesus has many, many parables and sayings in the New Testament that are karmic. And, of course, that’s the heart of the Buddhist religion, too. So, we’re talking about heaven on earth, about reaping rewards now, and about being perfectly happy now. [In Buddhism, karma affects this life, not just some (arguable) future life.—RS] You know the beatitudes: “Blessed are the meek, for they shall inherit the earth.” Well, that is a karmic saying. And, in Buddhism—here, I’ll read one… It’s from that book:

The slayer receives a slayer in turn,
The conqueror will surely be defeated,
The abuser will reap abuse,
And the reviler will be reviled.
[Salm, Buddhist and Christian Parallels, p. 47.]

That is from Buddhism. So, karma is probably the most essential element that unifies the two religions, in my opinion. And, I think now a case can be made that this young man, Yeshu ha-Notsri, when he spent all those years in Egypt, he became acquainted with Buddhism and rejected his Jewish heritage.
However, he was a very well educated Pharisee, and that puts another twist on the acrimonious interactions between Jesus and the Pharisees in the New Testament. You see, if Jesus himself was a Pharisee, he certainly would have known how to argue with them, and he would have gotten the better of them. Nobody to my knowledge has ever come up with this idea. And I’ll be interested in seeing where it goes.