Brian: One more question on the archeology itself… Do the different sects of Christianity agree on a location for Nazareth? Because you have the traditional Catholics, the Eastern Orthodox, the Armenian Church all existing there at the same time. Was there any scuttlebutt between them? 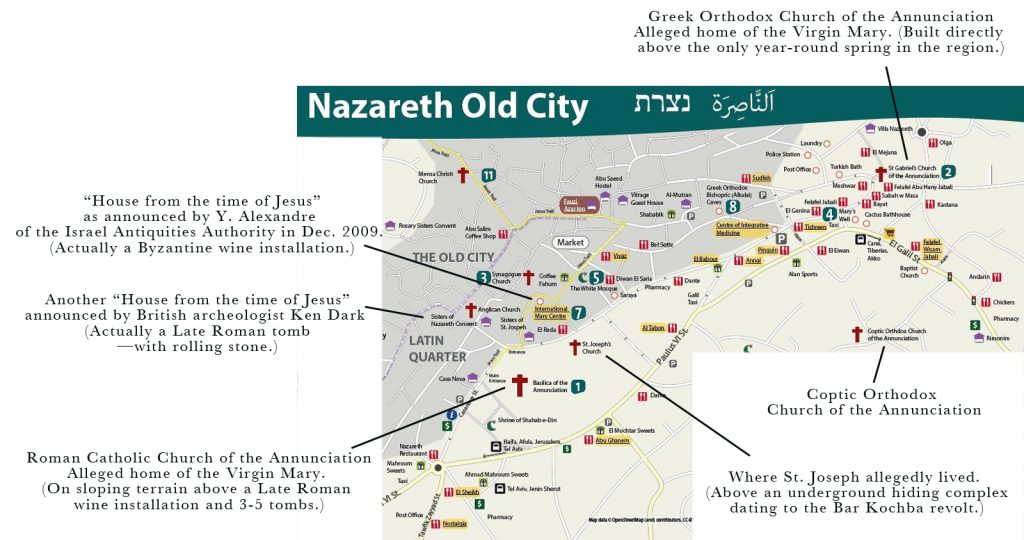 A standard tourist map of Nazareth.
Some major pilgrim sites are indicated with comments (expanded in my book “NazarethGate”). There are three claimed venues of the Annunciation, now under churches indicated above.

René: [There has been much dispute in Nazareth itself over what took place where, who lived where, etc. Regarding the location of the town itself, however, there has been no dispute.—RS] No, no. I think everybody agrees… There’s been no discussion to my knowledge of any other Nazareth. I discuss this a little in my books. It would not fly at all… If somebody said that Nazareth was really somewhere else, then you’d have ancient claims of two different Nazareths, and that doesn’t go anywhere… They have nowhere to go. If Nazareth did not exist where it’s traditionally placed now, then I think there’s going to be a big problem. One archeologist who responded to my book—although he panned it—he said, ‘Well, maybe Salm is onto something. Maybe Nazareth was at a place called Har Nitai, which is by the Sea of Galilee.’ But, you know, this is in the last ten years… It’s totally new, and nobody’s ever heard of this theory. And then, of course, you’ve got all those tens of thousands of pilgrims going to Nazareth every year… What are they going to do? [Chuckles.]…
Of course, tourism is very important to the Jewish state. And that’s a big complication that I show in my books. There’s a lot of cooperation between the Israeli apparatus and the Christians, because Israel stands to gain a lot of tourist revenue from Christians coming. They don’t want to do anything to jeopardize that. So they are helping Christians to develop a lot of resorts that have been built in the last twenty years. And they’re discovering new ones all the time. You know, ‘This is where John the Baptist baptized at the Jordan River… So we can get tourists down there. This is where Jesus sat, on this bench…’ Well, who knows… 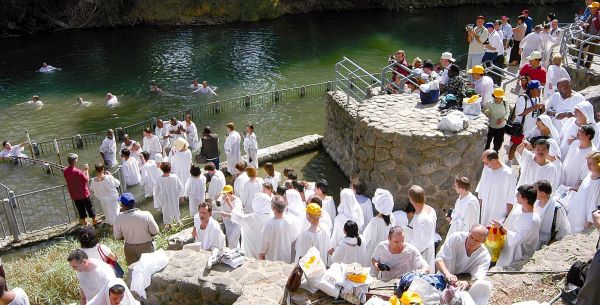 The country of Jordan also gets some Christian tourist action. Above is where some claim that John baptized Jesus (Bethany beyond the Jordan, Jn 1:28).

Brian: And the stations of the cross…

Rob: There’s a guy that runs the Armageddon tour. He shows you where the future battle between good and evil will actually take place.

Rob: Yeah. He’s from Texas, and he flies people out there. It’s just amazing… That’s a great point, that money is always behind it all…

René: Well, in the New Testament you’ve got Jesus walking all over Galilee. So the sky’s the limit. [Laughter.]

Brian: My parents spent ten days there very recently. I kind of wish I could have gone!

Rob: I’d love to go there too, you know. But, ahh, you might get blown up… René, are you aware of the debate that we’re having in October between Robert Price and Bart Ehrman? 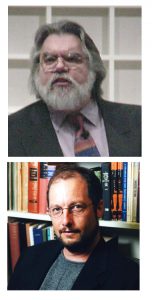 René: I am. I find it interesting… Although I’m on one side—very much sympathetic to Robert Price’s views. I have most of his books, I use them all the time. Regarding Bart Ehrman, I am sorry to say that I find him less than objective when it comes to mythicism. He tends to pooh-pooh the whole thing…

Rob: Now, what do you think is behind that? He’s clearly an atheist. What does he have to gain from promoting the historicity of Jesus?

René: Don’t forget that Bart Ehrman was originally an evangelical Christian. And I think that deep down he is not going to compromise on the root and essentials of Christianity. I’m talking about issues like the existence of Jesus, the existence of Paul, that the Gospel of Marcion possibly predated all the others… I don’t think you’ll find Bart waffling on these or accommodating them.
Ehrman certainly has not been sympathetic to my work. As far as Nazareth goes, Bart gave an opinion on Nazareth in his 2012 book, Did Jesus Exist? Unfortunately, he wasn’t correct on the facts as he stated them, and he ignored my own emails that I had sent him beforehand. So, he ignored the facts, and I’m not sure where he stands on all this. But, in the bigger picture, my research is taking me to Yeshu ha-Notsri. [On Yeshu, see my book NazarethGate chapter 14.—RS] And I think that Bob Price would be much more sympathetic to such a notion than Bart Ehrman. But I would be happy to be proven wrong.

Rob: There you go…

Rob: And you can be sympathetic to Robert Price at patreon.com/robertmprice, support his work there. As well as that of Mythicist Milwaukee at patreon.com. You can pledge as little or as much as you’d like—per show or per time period. Help us keep doing what we’re doing. We just have a couple of minutes left. We are talking to René Salm, an author who’s looking at the Nazareth problem that Jesus has. To wit: If the town he supposedly came from didn’t exist when he supposedly existed, how do we make the case for his existence? It seems pretty obvious. Any final thoughts, René?

René: Well, I just want to mention that my books have not been selling great, but surprisingly sales have been strongest in Australia. I don’t know why. Maybe you can supply a reason. It’s a very liberal country. And I want to mention that the Greeks have a very active mythicist program there. It’s Minas Papageorgiou—I say ‘hello’ to him. The Greeks are really taking the mythicist flag forward… Hermann Detering in Germany is very sympathetic, and he and I are actually working on a project together. So, things are happening. Mythicism is on the cusp of history. I contribute to my Mythicist Papers website just about every week, and I hope that listeners will go there and keep abreast of my work.

Rob: Fantastic. My own talk in October will be on the mythicist phenomenon and the popularizing of mythicism itself.
Thanks so much for joining us. Go to www.renesalm.com and look at his various works. He’s a musician, a composer—really, just a talented guy who’s doing what he can to promote our movement and mythicism. We’ll talk to you later, René. Thanks a lot.

René: Thank you for having me.

Rob: Great stuff. He’s got a theory to replace [Jesus]. I like that. I hope to hear more about Yeshu ha-Notsri, and the idea that Jesus was actually based on a character a hundred years earlier…

Rob: It’s fascinating that this guy is not just debunking common theory but is actually replacing it with something. Thank you for joining us. We will see you next week… Bye bye!