A Shift in Time: How Historical Documents Reveal the Surprising Truth About Jesus
by Lena Einhorn

In the foregoing paragraphs I necessarily simplified Einhorn’s argument and left out much in her book that supports her hypothesis. The many charts and tables that graphically illustrate and summarize her points are particularly successful and greatly strengthen the book’s conclusions. [A list of illustrations following the table of contents would have made the charts even more useful.—R.S.]

Despite the above, however, I find myself not entirely convinced by Einhorn’s solution. The focus of this study is too narrowly fixed upon Josephus. Left untreated are many currents that contributed to the rise of Christianity: the mystery religions, gnosticism, the Kyrios-cult, cynicism, Platonism, the logos philosophy, and so on. The reader misses a more encompassing viewpoint that would link the results of this study with wider New Testament scholarship. It is difficult to envision the historical development of a Christianity that began as a militant messianic sect and evolved into the early Catholic Church of the second century. Where in the New Testament are the echoes of the seditious founder of Christianity to be found? What meaning did Jesus’ resurrection have for those early Christian rebels? Einhorn devotes a whole chapter to “The Raising of the Dead” in the New Testament without mentioning what is arguably the central element of the entire religion: the resurrection of Jesus himself.

A further problem involves the question of how Einhorn’s theory of Christian beginnings relates to the apostle Paul. The traditional Pauline chronology leaves little room for a “time shift” as proposed here—in fact, it categorically contradicts it. Therefore Einhorn is at pains to elaborate a new and entirely unique Pauline chronology (pp. 172–79). However—without entering into particulars here—I doubt that her chronology can pass muster with New Testament scholars. But this may be irrelevant, because in my opinion the Pauline epistles are in all likelihood pseudepigraphical compositions of the second century. Yet, even a radical position regarding Paul’s chronology does not dismiss the need to engage with other major issues relevant to the apostle. To pose only one question here: How do Pauline christology and soteriology relate to the conception of an anti-Roman, militant rebel-messiah whom the Christian fellowship venerated at an early time? 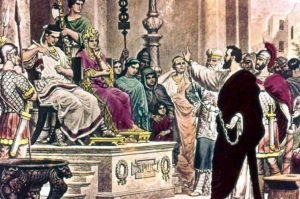 With recourse to Gal 1:14, Einhorn attempts to interpret Paul as a zealot. But neither Acts nor the epistles yields the least sign that the apostle was engaged in seditious activities. [If sedition were an accusation against Paul, it surely would have surfaced in Acts 22–26 where Paul’s arraignment is described in detail. Paul is consistently accused of religious apostasy, not political sedition (cp. Acts 24:5–6 and 26:30–32). This is independent of any possible “pre-Christian” zealotry on Paul’s part (Einhorn 72 and her note 21).—R.S.] One might also ask: how likely is it that the Roman citizen Paul participated in a rebellion against Rome?

As regards the many identifications that Einhorn suggests between figures in the New Testament and persons in the writings of Josephus, I note here that other interpretations are eminently possible. For example, in her book the anti-Roman messianic pretender Menahem is identified as Simon Peter (p. 159). However, the figure of Menahem could alternately have influenced the depiction of Jesus in the gospels: Menahem’s messianic entry into Jerusalem, the opposition of the priesthood, the contrasting cries of the people of “Hosanna” and “crucify him” within the space of a few days, the flight of associates/disciples, the final torture and the excruciating death (Wars 2.17.8–9)—these all recall Jesus’ passion week. According to an ancient rabbinic source, the messianic pretender Menahem was born in Bethlehem and his fate linked to the destruction of the Jerusalem temple. Hugo Gressmann, in 1922, pointed out that the Menahem tradition may well have influenced the gospel figure of Jesus. Regarding the saying that Jesus would raise up the temple again in three days (Mk 14:58; 15:29; Jn 2:19), Gressmann noted that it could “only have entered the gospel tradition after the destruction of Jerusalem” and thus could have been transferred from Menahem to Jesus (discussion here, p. 6). The triumphal entry of Jesus into Jerusalem could be similarly viewed. 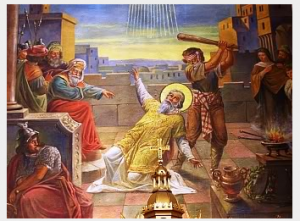 The death of James the Just.
The martyrdom of James was transferred to the mythical Stephen.

The protomartyr Stephen (Einhorn 63–72) presents a unique problem. Unlike Einhorn (p. 65) I find it very difficult to identify the Stephen of Josephus (Wars 2.12.2) with a Roman soldier.

Though scholars usually consider the martyrdom of Stephen as the model for the martyrdom of James in the Pseudoclementines, the historian H.–J. Schoeps took the opposite view. He postulated that the Pseudoclementine account was earlier. Proceeding from the indisputable facts that the early Christian tradition—with the exception of Luke—is notably silent regarding the church deacon Stephen and, instead, places James and his martyrdom center stage, Schoeps arrived at the conclusion that the Lucan account was pure fiction. Luke tendentiously wanted to weaken the unwholesome image of Saul/Paul as persecutor of the early Christian community and of its leader, James. So, the evangelist invented the story of Stephen, using elements from the martyrdom of James. Thus he was able not only to sanitize the image of Saul/Paul, but also to transfer the anti-cultic, anti-temple strain from the early James faction onto the leader of the Hellenist faction, Stephen.

I have concluded, along with H.–J. Schoeps, that the alleged Hellenist deacon Stephen never even existed.

Despite the above reservations, I do not dispute that some of the parallels Einhorn draws between Josephus and the New Testament have a certain plausibility. Nevertheless, I cannot ascribe to her hypothesis of a “time shift” in the form presented. The reason ultimately is that Einhorn believes she must adhere to the historicity of the Christian messiah. This forces her to assert identities that are hardly clear, much less proven. Persuasive evidence that the New Testament messiah is none other than the Egyptian messianic pretender mentioned by Josephus is simply not possible given the sparse source material. Lacking additional sources, such theses can never be verified. In my opinion, cleaving to the historicity of Jesus is a premise that may help explain the sometimes striking parallels and anachronisms, but that premise itself is not necessary.

The fact that Einhorn has not proven anything does not diminish her book. The explanation for the striking parallels between the New Testament and Josephus must be sought elsewhere. For me, that “elsewhere” becomes apparent when one jettisons the presupposition of a historical existence for Jesus. Doing so allows one to appreciate that Jesus is in all probability a late literary construct, the product of various messianic and gnostic streams of tradition that have flowed “synthetically into one.” 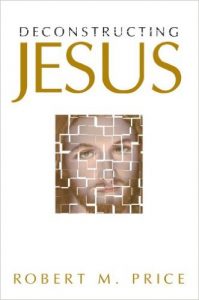 Elsewhere I have described how a savior entity, conceived in purely mythological terms, underwent a process of “historization.” In the eyes of its devotees, the entity was originally indistinguishable from other divinities familiar to the mystery religions, divinities that may well have preceded it. Through mingling with historical—in fact, pseudo-historical—elements, the author of the Gospel of Mark (or perhaps his predecessor) was one of the first to meet his community’s demands for a more concrete divinity, this presumably in Rome in the second century. Hence the creation of a savior in history, a savior combining traits of various messianic contenders and prophets mentioned by Josephus (for example, the preacher of destruction Jesus ben Ananias). This is not the art of the historian but of the storyteller, for though it begins with historical events it uses them for fictional and literary ends. In his book Deconstructing Jesus, Robert Price gives various telling examples of how this method was utilized, and how a number of building blocks was combined into the new structure.

In a sense, then, Lena Einhorn’s postulated “time shift” rests on a kernel of truth. It needs to be understood, however, not as the shifting of a particular person of history, or of the shifting of a particular nexus of events from one epoch to another. Rather, the evangelists have fused mythological elements together with the biographies of various persons of history, placing the resultant actors in a chronological and geographical setting that best served their purposes. The time displacement employed by the storytellers is of a different nature than that which Einhorn postulates.

“A Shift in Time” nonetheless serves decidedly useful purposes for Jesus mythicists. It makes possible an examination of the methods the evangelists used in their literary invention. It also facilitates an examination of the nature of some of the building blocks which they used as inspiration in the formation of their savior, Jesus. It is laudable, in any case, that Einhorn repeatedly reminds the reader of the hypothetical nature of her theses, which are—as is so much in this domain—provocative incentives for further thought. As Luther admitted: “We are beggars; this is true.”