It doesn’t take long for researchers into Christian origins to come across enigmatic notices in the Church Fathers regarding a gospel originally written in Hebrew. I write “enigmatic” because such a Hebrew Gospel has never been found. So, scholars have been scratching their heads for generations—nay, centuries—over numerous ancient remarks attesting to such a work which has, apparently, disappeared. Some scholars maintain that the ancient remarks about a Hebrew gospel are simply errors—the ancients didn’t know what they were talking about! How convenient… A little thought, however, quickly shows this line to be completely indefensible, because if multiple unrelated sources wrote about a Hebrew gospel, it is most unlikely that they would all be wrong. But this is the way history is often done in academe: those who don’t like the evidence just say it must be wrong!

However, James R. Edwards reveals in his 2009 book The Hebrew Gospel and the Development of the Synoptic Tradition that the ancient testimony is both conclusive and irrefutable. A Hebrew gospel indeed existed at the earliest stage of Christianity:

The widespread and enduring testimony in early Christianity to a Hebrew Gospel is the single most important conclusion of the first two chapters [of this book]. The evidence is more considerable than even specialists in the field often imagine. The tradition of an original Gospel written in Hebrew is attested by twenty church fathers… When references to the Hebrew Gospel by Pope Damasus, the Islamic Hadith, the scholia of Sinaiticus, and tractate Shabbat 116 in the Babylonian Talmud are added to this number, the list lengthens to over two dozen different witnesses… Each source mentions it at least once, and most mention it several times. Jerome references the Hebrew Gospel twenty-two times. Combined, there are some seventy-five different attestations to the Hebrew Gospel, extending from the late first century to the early tenth century. (Edwards 102–03; cf. p. 188.) 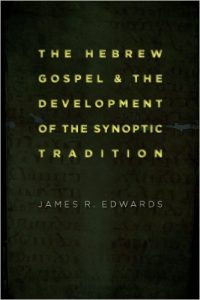 This post will serve as a non-technical review of Edwards’ significant book, published by Eerdmans. In his “Appendix I” (pp. 263–91) Edwards furnishes the seventy-five different attestations to the Hebrew Gospel that he notes above. Reviewing them, we come across familiar sayings, such as that of Papias (early II CE):

Matthew organized the oracles [of Jesus] in the Hebrew language, and each interpreted them as he was able. (Transmitted by Eusebius, Hist. Eccl. 3.39.16.)

In his discussion, Edwards remarks that “Hebrew” probably means precisely that—not “Aramaic.” Papias (again, according to Eusebius) referred another time to Hebrew Matthew, claiming an “account about a woman who was accused before the Lord of many sins, which is found in the Gospel according to the Hebrews.” Now, this story is not found in canonical Matthew, though we read something similar in Jn 7:53–8:12 (and, incidentally, also in the overlooked and much-maligned Gospel of Barnabas).

To cut to the chase, scholars have long wondered why the various attestations regarding Hebrew Matthew simply do not correspond with the canonical gospel of Matthew that we know (thus A. Klijn, discussed at Edwards p. 6). On this point, Edwards offers a remarkable solution—one I consider to be both an astonishing insight and the meat of his book: “Hebrew Matthew” never did correspond to the Greek canonical Matthew! Edwards argues that the ascription of the first gospel in the New Testament to “Matthew” is late and dubious. For example, he writes regarding the above citation:

The Papias note refers not to canonical Matthew but to the original Hebrew Matthew, which antedated the Synoptic tradition. Papias thus cannot have meant to equate Hebrew Matthew and canonical Greek Matthew.

This insight is remarkable in several ways. Not only is Edwards providing early evidence (mid-II CE) that sunders the Hebrew Gospel from the Greek Gospel of Matthew, but he is—perhaps even more importantly—affirming the existence of a pre-synoptic Hebrew gospel. As Edwards writes: “The oft-repeated and widely held scholarly consensus that the Hebrew Gospel… derives from the Synoptic tradition and is in various degrees a corruption of it can no longer be maintained” (p. 108). Edwards extensively argues this case, as the headings in his Chapter 3 show:

Only the third point needs to be taken with caution here, for it suggests that we are dealing with a familiar entity—a gospel that is “Repeatedly and Distinctly Similar to Luke.” This is a dangerous speculative leap, however, because even an outlandishly heretical text could have points in common with a canonical gospel (see below).

One strongpoint of Edwards’ book is his Chapter 4, “Semitisms in the Gospel of Luke.” In it, the author shows that the “special Luke” material is uniquely characterized by numerous Semiticisms—more precisely, by Greek renderings specifically from Hebrew (see. especially p. 185). Logically, Edwards concludes that the special Luke material derived from the Hebrew Gospel. On this, Pierson Parker already observed in 1940: “it can be shown that… the Gospel according to the Hebrews is not Matthean, and is to be related to the non-Markan portions of Luke” (quoted at Edwards 109).

In Chapter 6, Edwards seeks to explain why the Hebrew Gospel was neglected by the Christian tradition and why it continues to be neglected by modern scholarship on Christian origins. He comes up with two reasons: (1) the lack of an extant copy; and (2) “the result of resistance to a primary Hebrew influence in the Synoptic tradition” (p. 189). As regards the former, we can all lament the lack of a text, but Edwards correctly notes: “we need to consider why there is no extant copy of the Hebrew Gospel” (188). His answer devolves upon ancient suspicions regarding most texts held in high regards by “Jewish Christian sects” (192):

Already in the second century a number of Jewish Christian sects, the Ebionites and Nazarenes among them, were adhering exclusively to the Hebrew Gospel of Matthew rather than embracing the emergent Greek canon of the church. It was widespread opinion of the Gentile church that these same sects were introducing into the Hebrew Gospel textual changes… These idiosyncrasies and errors included Sabbatarianism, vegetarianism, insistence on circumcision, and strict Torah observance rather than faith in Christ. Above all, they included defective christologies and a rejection of Paul.

This is doubtless correct. Without having the text, however, we can only wonder at precisely how “heretical” the Hebrew Gospel was. And here, I believe, Edwards does not connect the dots between the total suppression of the Hebrew Gospel, its heterodox character, and the (catastrophically misleading) naming of the first New Testament gospel as “Matthew.” The skeptic must acknowledge that the later ascription of “Matthew” to one of the New Testament Greek gospels effectively erased the now alleged older Hebrew text from the record. Without the availability of that older text, the orthodox (Greek) work replaced the heterodox (Hebrew) work. Very clever. Abetted by the disappearance of the Hebrew text, this simple naming device has encouraged many to suppose that the Hebrew Gospel was fundamentally similar to canonical Matthew and thus unworthy of particular interest. The Hebrew Gospel was thus essentially erased from discussion. Mission accomplished.

However, Edwards has finally and unambiguously established the existence of a pre-synoptic Hebrew Gospel, one that is somehow related to the special Luke material. In all this, he naturally has something to say about the Synoptic Problem which, through his work, gains a viable (though apparently lost) antecedent even to the Gospel of Mark. Ancient witnesses tell us that such a gospel was used by heretics (Epiphanius writes that the “Cerinthians and Merinthians use the Hebew Gospel”) and, as Edwards notes, “The fathers clearly imply that the Hebrew Gospel is independent of the canonical Gospels, and several, such as Origen and Jerome, leave the impression that it was written earlier than the canonical Gospels” (p. 113). 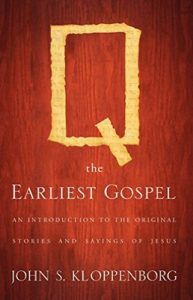 Laudably, Edwards devotes Chapter 7 to jettisoning the Q source (“Adieu to Q”). In Chapter 8 he takes up the issue of the authorship of canonical Matthew, and also the place of that Greek gospel in the synoptic schema. Here, in my opinion, he loses his way. He argues for the priority of Luke to Matthew (pp. 245–52)—a minority position that has little relation to the principal thrust of his book. Yes, Edwards is able to call upon certain scholars (especially Martin Hengel) in support of his thesis, but it is interesting to me that the very arguments he invokes lead to the contrary conclusion among the vast majority of his peers—namely, that Luke used Matthew. In fact, Edwards himself observes in a footnote (p. 255) that “of the fourteen major attempts to solve the Synoptic Problem, Luke is presupposed as the final stage of tradition in all of them” (citing L. Vaganay). In general, I find that Edwards’ argument relies on fairly vague observations, such as that “The Gospel of Matthew displays greater design, balance, proportion, and order than any of the other three Gospels” (p. 246). Even were such a subjective assessment true, however, it would not determine the question of synoptic order. I won’t go into further details on this question here but refer the reader to Klinghardt’s carefully worked out synoptic schema charted in a prior post. To Edwards’ credit, however, that synoptic schema will now have to be updated with the addition of Hebrew Matthew.