In the last post we introduced the Hebrew Gospel, specifically through the work of James R. Edwards and his 2009 book The Hebrew Gospel and the Development of the Synoptic Tradition. Edwards successfully sunders the Hebrew Gospel from association with the canonical Gospel of Matthew. The Hebrew Gospel was indeed pre-Matthean and even pre-synoptic. However, it had links not with the Gospel of Matthew but with the “special Luke” material in the third gospel. Furthermore, Edwards gives indications that the Hebrew Gospel was “heretical”: it was used by Jewish Christians, was never canonized (pp. 104–05), and contained a defective christology and a rejection of Paul (192). Now, “defective christology” can mean only one thing: the Hebrew Gospel had a different conception of “Jesus” than did the emergent Hellenist church. We have seen that the spiritual Jesus (first century) may well have preceded the fleshly Jesus of Nazareth (second century). Though we have no copy of the Hebrew Gospel, it is nevertheless probable that it contained a docetist view of Jesus with the attendant mythicist implication: Jesus of Nazareth did not (yet) exist. 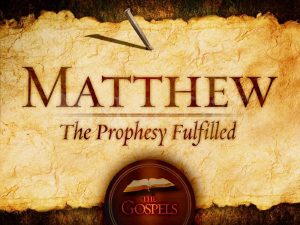 Nevertheless, the tenor of Edwards’ book is in defense of the tradition at every turn. This attitude may even have affected his conclusions. We may wonder why—after divorcing the Hebrew Gospel from GMt (and linking it to GLk)—Edwards then takes the Church Fathers at their word and postulates the existence of a “Hebrew Gospel of Matthew” after all (Edwards p. 181; chart p. 116). This conclusion appears inexplicable, because Edwards admits that “canonical Greek Matthew exhibits no particular signs, as does Special Luke, of having been indebted to a Hebrew original” (p. 254). Edwards never reconciles these contrary positions in his book. We, on the other hand, must follow the evidence and conclude:

Of course, the identification of the Hebrew Gospel with “Matthew” (in conflict with points [2] to [6] above) is now so long-standing, and so ingrained in the tradition, that doing away with the designation “Hebrew Matthew” will probably take some time and will be met with considerable opposition. In any case, we now know better, and henceforth it is clear (at least to this writer) that the phrase “Hebrew Matthew” is a misnomer and should be avoided. There was no Hebrew Matthew! There was a Hebrew Gospel (pre-synoptic), and there is the Gospel of Matthew (canonical). The two works were clearly very different. Though today we apparently do not have a copy of the Hebrew Gospel, the scores of ancient references to it suggest that it was a heterodox “Ebionite” work with probably “defective christology” and “a rejection of Paul” (Edwards 192). In order to dispose of this work, the Church suppressed copies of it (none seem to have survived) and associated it with a new and thoroughly orthodox Greek gospel called “Matthew.” As argued in the prior post, the Church did these things in order to help erase the heterodox Hebrew Gospel from the record.

From the surviving passages of the Church Fathers (assembled at Edwards pp. 263–91), we can actually trace the history of the false association of the Hebrew Gospel with “Matthew.” In the following list I only go up to the fifth century CE and assume that later witnesses are dependent on these:

From the above we see that the earliest link between the Hebrew Gospel and Greek “Matthew” was made by Irenaeus in late II CE (text here). This was not long after the composition of Greek Matthew itself (written in mid-II CE, after the arrival of Marcion in Rome, we recall). 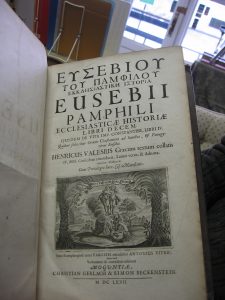 After a long century in which the Church gained greatly in numbers and power, the Irenaean linkage was taken up in force by Eusebius, who then back-ascribed the invented association “Hebrew Gospel of Matthew” to Papias, Pantaenus, and Origen (note the words “imputed to” above). Eusebius essentially put words into the mouths of the earlier churchmen… When we look at the surviving writings of Papias and Origen (nothing remains by Pantaenus), those authors actually refer only to a “Gospel according to the Hebrews”—they nowhere link it with Matthew. This is especially incriminating regarding Eusebius’ misrepresentation of Origen.

It is unfortunate that Edwards simply takes the Church Fathers at face value. In fact, most Patristics scholars do so even today. Lacking any skepticism, scholars generally suppose that if Eusebius claims that an earlier witness said something, then that early witness did indeed say it… Without proper scrutiny a false history of Christianity is thus perpetuated. On the other hand, when scrutiny is applied, the scholar discovers that the actual events of the first Christian centuries were simply rewritten by the Church fathers.

In this case, “the Hebrew Gospel” became “the Gospel of Matthew translated from Hebrew into Greek.” Yet careful inspection of the data shows that no Hebrew version of Matthew ever existed, and that no translation of such a work ever took place. It is also clear that sometime in the late second century, the Greek Matthew (by name) and the Greek Luke (with some similar content) gradually supplanted the Hebrew Gospel, which was soon forgotten. The surviving records suggest that Irenaeus may have been the Church Father who came up with this gospel renaming idea. Following Irenaeus, later Church Fathers—principally Eusebius, Epiphanius, and Jerome—propagated the misleading notion.

As an aside, Jerome’s witness is particularly complex (see discussion at Edwards pp. 28–37). In one place Jerome states that “it is not certain who” translated the Hebrew Gospel of Matthew into Greek (Viri Illus. 3). But in another place he claims that he himself did the translation (Comm. Matt. 12.13). In yet a third passage, Jerome writes: “We must confess that as we have it in our language [Greek] it is marked by discrepancies, and now that the stream is distributed into different channels we must go back to the fountainhead” (Pr. Qu. Ev., see Edwards p. 286). Does this mean that Jerome re-translated the Hebrew Gospel in order to remove “discrepancies”? Be that as it may, Jerome shows that in his time (c. 400 CE) the association of the Hebrew Gospel with “Matthew” was still not hard and fast, for he writes about the work “which many call the authentic Matthew” and “as many allege, according to Matthew” (Edwards 283, 287).