The slide into oblivion

We have seen that the Church took considerable pains to erase the Hebrew Gospel from history. The fact that no manuscripts of this text survive is telling. Its annihilation is total. What makes that fact even more astonishing is that GHeb was not always denigrated by the Church. When one reviews the approximately 75 references of the Church Fathers to the Hebrew Gospel, it becomes evident that the farther back in history one goes, the more positively GHeb was esteemed. The converse is also true: with the passage of time GHeb went from being admired, to merely tolerated, then spurned, then denigrated, and finally completely eliminated. The text’s decline was slow—it took approximately four centuries: c. 100 to c. 500 CE. 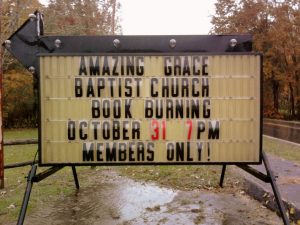 Book burning today has a long tradition in Christianity. The Hebrew Gospel was one of many casualties.

J. Edwards, in his book devoted to the gospel, writes of “extensive and diverse testimony in the early centuries of Christianity to an early Hebrew Gospel.” The work was “cited more frequently and positively alongside canonical texts than any non-canonical document of which I am aware” (p. 43). Edwards reviews references to GHeb by no less than seventeen Church Fathers, as well as by Jewish and Moslem witnesses. He concludes: “The Hebrew Gospel was widely known and, in general, highly esteemed in early Christianity” (emphases added). So, what happened? How did an early, pre-synoptic (even pre-Marcionite) gospel—one that originally received considerable recognition—eventually become so odious to the Church that not even a single copy survives?

Answers to the above questions must involve theology—a theology that was changing… Doctrines that flourished in the first century could not do so once the Church rose in power and began censoring information. After all, the Mediterranean basin was very different in the year 500 than in the year 100. What was acceptable in one era was not in the next. Christianity had risen from the status of persecuted outsider to that of dominant (even ruling) paradigm. By the dawn of the Dark Ages, the Pope was finally a very powerful magnate—both in religious and in temporal matters. The field of acceptable discussion had narrowed greatly. Theologically, the later Roman centuries witnessed the conquest by a new savior: Jesus of Nazareth. Only what validated him was acceptable.

The principal theological question of Late Roman times was christological: What was the nature of Jesus? The so-called Arian controversies resulted in the eventual defeat of all views that saw Jesus as somehow within the reach of human potentiality. It may be difficult to imagine today, but in the early Christian centuries the dominant paradigm was not to be saved by Jesus, but to be like Jesus—through gnosis, asceticism…—to become “a Jesus.” The various church councils put an end to all this. They essentially decreed: Jesus was divine and ‘other’ from the beginning. He was not subordinate to God in any way. He was God. Nobody ‘becomes’ him. Thus, the only acceptable attitudes are worship, faith, hope for grace, and (above all) membership in the only, true, holy, and apostolic Catholic Church. Basically, when the early church councils finished their work (already in Byzantine times) the message was clear: thinking for yourself was anathema and probably the most dangerous thing one could do. If you want to go to heaven you must submit to the Church and be validated by Jesus’ only sanctioned representative on earth—the Pope. 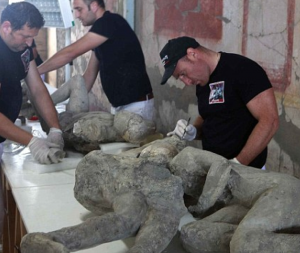 Pompeii. Preparing bodies for exhibition. Many Jews thought the eruption of Vesuvius in 79 CE was God’s vengeance for the destruction of the Jerusalem temple.

The theological controversies in Late Roman times were not mere abstractions, not trifling theological differences over the dinner table. In a time when invisible demons were considered quite real, when earthquakes, eclipses, and other occurrences in nature were still widely considered acts of God, people were imprisoned for their erroneous views. They could even lose their lives. In illustration of the ubiquitous reach of religion, here is a passage from my book, The Myth of Nazareth (p. 278):

Epiphanius was a younger contemporary of Count Joseph [of Tiberias], and met him about 358 CE at the latter’s sumptuous home in Scythopolis (Beth Shan). At that time bitter factionalism was raging in the Church between the Nicene (orthodox) and Arian factions. Arianism was on the ascendant, and at the Council of Milan in 355 it was reinstated by Emperor Constantius II as the official state religion. As a major protagonist of the Nicene faction, Epiphanius was in Scythopolis with a few others of similar persuasion in order to receive direction from Bishop Eusebius of Vercelli, a Nicene activist from Italy who was now in jail there. Bishop Eusebius was himself at the heart of the Arian controversy. While in Italy he had been asked by the bishop of Rome (the pope) to petition emperor Constantius for a decision on the Arian question. The emperor duly convened the Council of Milan but—to the chagrin of Eusebius and the pope—its verdict went against the Nicene (though ultimately victorious) faction. Bishops throughout Christendom were forthwith required to condemn Nicene doctrine. Upon his refusal, Bishop Eusebius was exiled to Scythopolis. This was a very Arian town. According to Epiphanius, only two Nicene Christians were to be found in the whole city: Bishop Eusebius and Joseph of Tiberias. To further rub salt in the wound, Eusebius’ jailer was himself an Arian bishop named Patrophilus. Bishop Eusebius refused to accept food from Arians, and (so Epiphanius tells us) he recounted with pride that he almost starved to death on more than one occasion.

Though much of the above depends on hyperbole from Epiphanius’ untrustworthy pen, it is clear that lives could be changed according to their religious views. As the Catholic Church grew in power in Late Roman times, it became more and more important to toe the line regarding religious correctness. The empire-wide Arian controversy in the fourth century had to do with limiting Jesus of Nazareth’s undeniable human nature. That question pales, however, in comparison to earlier dogmatic conflicts, such as the wholesale denial of Jesus’ human nature (i.e. “he” was a pure spirit)—or even that Jesus of Nazareth never existed (the early ‘docetist’ brand of Jesus mythicism—see NazarethGate 417–18).

Modestus, the Christian praetorian prefect who oversaw the treason trials in Scythopolis… rose to the rank of Comes Orientis under the Emperor Constantius, also a Christian. When the pagan Julian became emperor, Modestus was dismissed. However, he converted to paganism, regained favor, and was then promoted to prefect of Constantinople. When Valens assumed power, Modestus again converted to Christianity and was made praetorian prefect of all the East. (The Myth of Nazareth, 282)

One can appreciate, then, how toeing the line with regard to religious matters became increasingly critical to advancement and even survival in the later Roman empire. And this, perhaps, explains the inexorable slide into oblivion of the Hebrew Gospel. With the ascendancy of Jesus of Nazareth—“God made man” (not man became God…)—a text that said Jesus was never man (for he is pure spirit and ever at the side of man) would be strictly anathema. And this is clearly the christology of the Hebrew Gospel, as Jerome writes:

For since the apostles considered [Jesus] to be a spirit or, according to the gospel which is of the Hebrews and is read by the Nazoraeans, a demon without a body, he said to them… (Edwards 284.)

Today, we call the above ‘docetism,’ but the term does not do justice to the essential element: if Jesus is strictly spiritual, than he (“it”) is available at any time, in any place, and to anyone. In this sense, the earliest christology viewed Jesus as a potential and perfect attribute of any human being. This is a ‘super-Arianism,’ for it places Jesus within the reach of human potentiality. Paul, in fact, has a similar theology. He seems to think that at one time in the fairly remote past, a prophet (who was ignominiously crucified) merged with the Jesus (“savior”) spirit and showed others the way. In my view, such a founding prophet actually existed in the time of Alexander Janneus. In later times he came to be known as ‘Jesus of Nazareth.’ The Jesus-as-spirit theology (interpreted as merging with any worthy human) was anathema to the Church, for it nullified authority (anyone could claim to be a Jesus), prevented worship, and broke the Church’s monopoly by replacing one sanctioned source of truth with a myriad points of light.