For since the apostles considered [Jesus] to be a spirit or, according to the gospel which is of the Hebrews and is read by the Nazoraeans, a demon without a body, he said to them… (Edwards 284.)

This interesting citation suggests several things:
(1) the Hebrew Gospel endorsed the Jesus-as-spirit christology, something Jerome seems to view (with disparagement, no doubt) as “a demon without a body”;
(2) the Hebrew Gospel was used by the Nazoraeans—recalling Mt 2:23, “for he shall be called a Nazoraean.” The early followers of Jesus were generally called “Nazarenes” by Jews (sometimes minim). In the early third century Tertullian could still write: “The Jews call us Nazarenes on account of [Jesus].” Epiphanius (late IV CE) observed that the “heresy of the Nasaraeans existed before Christ and they did not know him.” This seems to mean that the Nazarenes/Nasaraeans were the followers of Jesus before Jesus became God—that is, they were early followers of the spiritual Jesus.
(3) Jerome astonishingly admits that the apostles considered Jesus to be a spirit! We can leave aside the question of whether, in the above citation, Jerome equates “spirit” with “demon without a body”—but so it indeed seems to me. In any case, the Hebrew Gospel’s christology was of a bodiless Jesus. This coheres with the christology of the Pauline epistles, where Jesus is a cosmic, omni-present spirit ever available (NazarethGate 408–11). But by the time Jerome was writing (c. 400 CE), Jesus christology had developed to include the divine-man Jesus of Nazareth—a divinity who obviously has a pronounced human dimension (as portrayed in all four canonical gospels): he is born (though of a virgin), he resurrected bodily from the grave, and so on. In short, by Jerome’s time the Hebrew Gospel (whose bodiless christology denied even the possibility of Jesus of Nazareth) had become rank heresy. 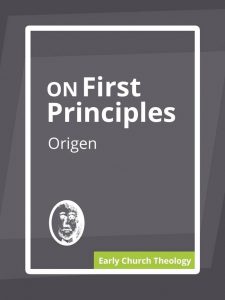 Certainly one of the most learned of the Church Fathers, Origen was a text critic, linguist, and superb theologian. His views, unfortunately, were too far ahead of the Church.

We know that already in the early third century GHeb was viewed with suspicion. This is clear, for example, from the trepidation with which Origen writes about it: “It is written in that Gospel, which is called ‘According to the Hebrews’ (if it pleases one to receive it, not as an authority, but as an example of the proposed question)…” (Edwards 269). Nevertheless, it is most interesting that Origen also rails against the fleshly-Jesus view:

But if any would produce to us from that book which is called ‘The Doctrine of Peter,’ the passage where the Savior is represented as saying to the disciples: ‘I am not a bodiless demon,’ he must be answered in the first place that that book is not reckoned among the books of the church, for we can show that it was not composed by Peter or by any other person inspired by the Spirit of God.

The gist of this passage is that Origen is himself sympathetic to the spiritual-Jesus christology! This coheres with his citing GHeb in several places—while he knows full well that many do not accept it. If our interpretation is correct, then it is clear that history was quickly moving away from Origen. In fact, he was eventually excommunicated from the Church and his works anathematized. We can suppose that Origen’s expulsion from orthodoxy had much to do with his Jesus-as-spirit christology. That christology had changed, but Origen had not changed with it. Unfortunately, much from Origen’s pen that would explain his christology in detail was destroyed by the Church, rendering it all the more difficult to reconstruct Origen’s christology.

Other passages from the Church Fathers confirm that, in the earliest Christian stratum, the nature of Jesus was spiritual. We have seen Jerome’s words (above) which are extraordinarily explicit: “the apostles considered [Jesus] to be a spirit.” No statement could be more clear. This view coheres with what we learn about the Hebrew Gospel. For example, Epiphanius writes concerning those who use GHeb: “Again, they deny that [Jesus] was a true man,” and “But they claim that [Jesus] was not begotten from God the Father, but rather that he was created as one of the archangels, although greater than them” (Edwards 277). This suggests a sort of fusion between man and divine—neither entirely one nor the other.

“Paul” seems to have espoused a similar theology. For him, “Jesus” is spiritual. But the Jesus spirit had fused with a saintly man/prophet at some time in the remote past (a prophet that I identify with Yeshu ha-Notsri). For Paul, it is the spirit of Jesus that is efficacious: the Jesus spirit had raised that prophet up to divinity—and the spirit Jesus can similarly act in the lives of any pure and believing person, at any time. Thus, for Paul, the spirit of Jesus is an eternal, cosmic entity, ever available to all of us. Paul does not yet know Jesus of Nazareth.

As in Pauline thought, the Hebrew Gospel seems to have preserved the distinction between the spiritual (divine) Jesus and the fleshly (human) prophet. The two elements—God and man—are not yet completely and uniquely fused as they will be in Jesus of Nazareth. The prophet of GHeb is a teacher—but he is not God. Sometimes he is indeed called “Jesus” (Yeshu?), showing a propensity to forget the prophet’s mundane biography and to subsume it into what Christians found important: the spirit of Jesus that possessed the prophet. The few passages from GHeb that have survived preserve some of the prophet’s teachings, also familiar from the later canonical gospels. 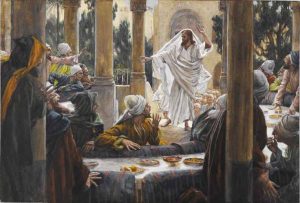 The prophet in GHeb hails from Capernaum, chooses disciples (including Peter), and upbraids the “scribes and Pharisees” (i.e., the Jewish religious establishment). His ministry takes place “when Herod was king of Judea and Caiphas was High Priest” (Epiphanius, at Edwards 275). In my view, the Hebrew Gospel has forgotten the biography of Yeshu ha-Notsri and has simply transferred the prophet into a more contemporary setting. Already, however, the Hebrew Gospel presents us with the template of Jesus of Nazareth’s biography as it will be found in the subsequent second century canonical gospels.

In the 75 passages from the Hebrew Gospel that have come down to us, Jesus/the prophet works not a single miracle. This, of course, coheres with the view discussed above: in GHeb the prophet is not God. He is a saintly man who has become possessed, as it were, by the spirit of God (“Jesus”). The prophet teaches, exhorts, and travels the countryside with his disciples. He is called a “Nazarene” (Edwards 281)—a term Mandaism defines as a “keeper (Heb. notser/notsri) of secret knowledge.”