This series of posts is an attempt to help resurrect the Hebrew Gospel from a very long and undeserved oblivion. Though little more than a name today, in the early Christian centuries the Hebrew Gospel (GHeb) was noted by many Church Fathers—sometimes positively, sometimes negatively, and sometimes simply with a neutral tone. Seventy-five references—a few with quotes—demonstrate that GHeb was significantly different from our canonical gospels. Its most critical difference was in christology, for in GHeb Jesus was a spirit:

For since the apostles considered [Jesus] to be a spirit or, according to the gospel which is of the Hebrews and is read by the Nazoraeans, a demon without a body, he said to them… (Edwards 284, citing Jerome) 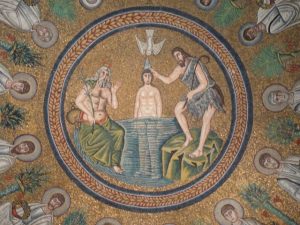 It is astonishing that Jerome, writing c. 400 CE, would acknowledge that “the apostles considered him to be a spirit.” This view—so contrary to the canonical gospels—is further support that, as we have seen, the spirit christology was very early (first century CE) and preceded the canonical gospels and their figure Jesus of Nazareth (second century CE). The spirit christology is also reflected in the Pauline epistles—which also do not yet know Jesus of Nazareth, but which know Jesus as a universal spirit immediately available to all (NazarethGate 408 f).

Other statements by the Church Fathers support the judgment that GHeb viewed Jesus as a spirit who united with a thoroughly human prophet. In the citations from GHeb that have come down to us, no miracles are apparent. Jerome, however, reports one passage from GHeb that shows ‘Jesus’ in the familiar status of healer:

In the Gospel used by the Nazarenes and Ebionites, which we recently translated into Greek from the Hebrew language—and which many call the authentic Matthew—the man having a withered hand was a mason who begged for help in the words, “I was a mason who worked with my hands for a living; I beg you, Jesus, restore me to health so that I may not have to shamefully beg for food.”

One might suppose, from the above, that the Hebrew Gospel portrays a divine Jesus who heals. After all, in the canonical parallels Jesus (as Son of God) straightaway heals the withered hand (Mk 3:1–6; Mt 12:9–14; Lk 6:6–11) in a pericope concerning healing on the sabbath. It is possible, however, that in the Hebrew Gospel Jesus is simply a man, and that he heals by the power of God invested in him. Such a view is, in fact, precisely what we find in the virtually unknown Gospel of Barnabas, where Jesus is a healer but is emphatically not divine:

Descending from the mountain to come into Jerusalem, Jesus met a leper who by divine inspiration knew Jesus to be a prophet. Therefore with tears he entreated him, saying: “Jesus, you son of David, have mercy on me!”
Jesus answered: “What will you, brother, that I should do to you?”
The leper answered: “Sir, give me health.”
Jesus reproved him, saying: “You are foolish; pray to God who created you, and he will give you health; for I am a man like you.”
The leper answered: “I know that you, Sir, are a man, but an holy one of the Lord. [= “Nazarene,” Mk. 1:23–24.—RS] Wherefore pray you to God, and he will give me health.”
Then Jesus, sighing, said: “Lord God Almighty, for the love of your holy prophets give health to this sick man.”
Then, having said this, he said, touching the sick man with his hands in the name of God: “O brother, receive your health!”
And when he had said this the leprosy was cleansed, insomuch that the flesh of the leper was left to him like that of a child.

In this passage Jesus is addressed as “Sir.” He in turn addresses the leper as “brother,” signaling that both share the same nature. It is God (not the prophet) that effects the healing, something that is accomplished only through prayer. In this text, Jesus is “a man like you,” and he invokes God who does the healing. This is a very different christology than the Jesus of the canonical gospels, a figure who is himself God. Chronologically, the Jesus ‘as man’ christology was certainly earlier, as we have seen. For this reason, I strongly suspect that the Gospel of Barnabas (GBar) has elements that astonishingly go back to the pre-canonical stratum.

Introducing the Gospel of Barnabas

This gospel is one of the most unknown—and controversial—gospels in existence. The unlikely combination of obscurity and notoriety should give one pause… I won’t enter into the many heated claims and counterclaims made about GBar here. Christians almost unanimously consider it to be a medieval work and thus worthless for understanding Christian origins. Muslims, on the other hand, consider it to be very ancient—even going back to the earliest Christian centuries. As will most readers of this blog, I consider Muslim claims that the gospel predicted the coming of Mohammed proof that those passages were penned after the life of the founder of Islam (the well-known vaticinium ex eventu). Mindful, however, of the very sensitive times in which we live, when the relations between Islam and Christianity/Judaism are strained to the limit, I intend to focus on those elements in GBar which may illumine the history of early Christianity.

Though I am still fairly new to this gospel, in my view both the Christian and the Muslim attitudes towards GBar are oversimplifications. The Gospel of Barnabas is neither medieval (the Christian view) nor first century (the Muslim view). On the other hand, it is both medieval and first century. To explain: this long and astonishing gospel shows signs of being an accretion of multiple stages over its long life. One of those stages is indeed medieval. One is post-Mohammad. One is pre-Constantine. And one, most remarkably, appears to correspond with what we have learned in these pages regarding first century proto-Christianity—that is, the pre-synoptic stage that Edwards has identified with the Hebrew Gospel. Now, I am not claiming that the Gospel of Barnabas is the lost Hebrew Gospel… However, I am suggesting that GBar has elements that derive from the same pre-synoptic stratum as the Hebrew Gospel. As we have seen, Klinghardt and Vinzent date the synoptic gospels to post-Marcionite times—that is, towards the middle of the second century. This means that the earliest elements of GBar (in my opinion) date before that time.

Those earliest elements are twofold: (1) familiar logia and parables of Jesus that appear in GBar in arguably more authentic form than in the canonical gospels—and also with accompanying ‘frame stories’ that are in many cases more believable; and (2) the Gospel of Barnabas indubitably contains a host of most remarkable sayings of Jesus that are not found in the canonical gospels. In fact, those sayings and parables are elsewhere entirely unknown.

2012 London Daily Mail article on the surfacing of a potentially third manuscript of the Gospel of Barnabas.
The manuscript has not yet been tested for dating. Its relation to the other copies of GBar is unknown.
(Click on photo for extended story. WARNING: Poor spelling, and subsequent tangential discussion of contemporary events.)

The very heretical GBar survives in two sixteenth century manuscripts: one Italian, one Spanish. A third manuscript has allegedly been recently discovered in Turkey (see pictured article above). Though known now for thirty years, this manuscript has still not been tested for dating. Its content is unknown. If it is indeed a manuscript of the Gospel of Barnabas, it may or may not contain late Muslim additions. GBar was apparently transmitted in Arab countries for many centuries—outside the reach of the Church. We will consider this gospel more closely in future posts. I simply introduce it here because the gospel seems to reflect the early, Jesus-as-man christology typical of the first century CE. In fact, the vehemence with which the text repudiates the ‘divine’ Jesus suggests that (at least) the above pericope on the healing of the leper was written in reaction to the emergent Hellenist Christian tradition with its divine Jesus—that is, as early as the mid-second century. We will see that even earlier elements may be present in the two known manuscripts of this gospel.