NOTE: This series of explorative posts represents ongoing research that is provisional. Admittedly contra the totality of scholarship in the field, its basic thesis is that the “gospel” of Marcion was a theology, a teaching, “good news” (euaggelion) but never a text resembling the Gospel of Luke (a sure impossibility, given Marcion’s flagrantly non-Lucan theology). The several posts on this website that have already treated the Gospel of Marcion as a precursor to the Gospel of Luke, and as implicated in the textual development of the canonical gospels, will eventually be revised and brought into conformity with the view set forth below.—R.S.

Regular readers of this blog are aware that the Gospel of Marcion figures importantly in a new solution to the synoptic problem proposed in prior posts—based on the work of scholars such as M. Vinzent and M. Klinghardt. A growing consensus among current ‘radical critics’ is that the Gospel of Luke was an expansion of the Gospel of Marcion and not the other way around (as Harnack and mainstream scholars have argued). Klinghardt argued that all four canonical gospels postdate the Gospel of Marcion—with seismic consequences: the New Testament gospels must then move well into the second century, and they must be viewed as elaborations of an ultra-heretical work. 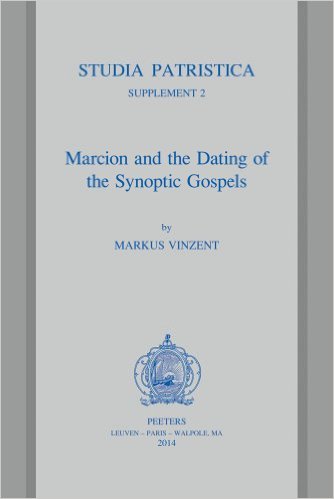 Being myself a radical critic of Christian origins, I have been quite pleased to encounter the above work of Vinzent and Klinghardt. Their conclusions, if true, suggest that early Christianity was intimately related to Marcion’s view of two gods and to his view of a docetic (spiritual) Jesus. Several posts on this website have also explored the docetic nature of many apocryphal Christian texts, and also of Paul’s conception of Jesus as a spiritual entity. Thus, including Marcion in the early mix happens to fit right in with my thinking. The entire thrust of these lines of inquiry pushes the canonical gospels—and the figure of Jesus of Nazareth—into the second century. Well and good…

However, a couple of months ago I realized that a serious problem exists with the view of Marcion currently universally held by both traditionalists and radical critics. We recall that Marcion is envisaged to have brought to Rome (in the 140s CE) a collection of Pauline epistles and also a gospel. My work on Paul, however—and specifically on the development of christology—demonstrates quite plainly that the christology of the epistles (their conception of Jesus) is quite different from the christology of the Gospel of Marcion (GMcn). Thus, for some time now I have wondered: How is it possible that Marcion brought with him two corpora of texts that are fundamentally incompatible? After all—as I explain in my book NazarethGate (408 f)— the Pauline epistles did not know Jesus of Nazareth. That figure is not mentioned once in all the epistles, and ‘Jesus’ is a cosmic spiritual entity for Paul. On the other hand, GMcn (as reconstructed by Klinghardt and others) presents the God-man Jesus the Nazarene familiar to us all, a figure wandering the Judean and Galilean countryside who is emphatically not a merely spiritual entity.

The theological incompatibility between the Pauline epistles and GMcn bothered me. It didn’t fit into the received accounts of Marcion, his writings, and his alleged role in the early church. I contacted some scholarly acquaintances on this matter and elicited their opinions. The general view was that Marcion was a ‘collector’ of these texts, rather than their author. As such, he was able to interpret them in conformity with his views (the distant unknown god, the spiritual Jesus, etc). The texts, however, may lend themselves to other interpretations…

However, as I researched the reconstructed Gospel of Marcion more closely, it became clear to me that it does not reflect Marcion’s theology at all. In other words, the problem is even deeper than a clash of christologies between epistles and gospel. The amazing truth is that the Gospel of Marcion (as reconstructed by Harnack, Knox, and Klinghardt) does not in any way represent Marcion’s own theology!

In fact, we know Marcion’s theology quite well. It is the main focus of the elaborate anti-marcionite writings of numerous Church Fathers. Furthermore, we possess the evidence of a tractate—ostensibly written by Marcion himself—called the Antitheses. This work (as reconstructed from the writings of the heresiologists) not only confirms the accusations made against Marcion, but it also sets forth the heretic’s views. Those views have been summarized in eight points by J. Knox:

(1) The Creator of the world, although a real God, must be distinguished from the higher God,
unknown except as he was revealed in Christ;
(2) the Creator of the world is a just God, but severe and harsh;
the God whom Christ revealed is a Father, a God of love;
(3) judgment is the prerogative of the Creator, redemption is the free gift of the God of love;
(4) the Jewish scriptures represent a true revelation of the Creator, but they do not speak of or for the God whom alone
Christians ought to worship and from whom alone salvation from the present wicked world is to be received;
(5) the revelation in Christ was intended not merely to supplement or “fulfill” Judaism, but entirely to displace it
—the one had no connection with the other;
(6) the Son of the Father did not actually take sinful flesh but only appeared to do so;
(7) there is no resurrection of the flesh;
(8) Paul was the only true apostle, to whom Christ committed his gospel
—other “apostles” were false and had misled the church.
(From J. Knox, Marcion and the New Testament, 1942, p. 7)

However, of the eight points above, only the second is (modestly) attested by the reconstructed “Gospel of Marcion.”