In the prior post I noted with surprise that “the Gospel of Marcion (as reconstructed by Harnack, Knox, and Klinghardt) does not in any way reflect marcionite theology!” The question thus naturally arises: How could Marcion have promoted/published a gospel which stridently and categorically contradicts his own views?

Of course, he did no such thing. Frankly, it amazes me that specialist scholars past and present have not recognized this basic and obviously critical flaw in their marcionite reconstructions. Any reconstruction of a “Gospel of Marcion” must be incorrect if it fundamentally contradicts Marcion’s own theology. This observation needs no argument. It speaks for itself.

The most recent (and also most ambitious) attempt to reconstruct Marcion’s gospel is that of Matthias Klinghardt: Das älteste Evangelium und die Entstehung der kanonischen Evangelien (“The Oldest Gospel and the Origin of the Canonical Gospels,” 2015, 2 vols). At 1279 pages, one can be confident that Klinghardt has provided copious discussion and reasoning at all points. His treatment vastly eclipses prior reconstructions. Yet, while I refer extensively to Klinghardt’s work in these posts, I arrive at very different conclusions.

In the reconstructed Gospel of Marcion we find no hint of two gods—one god being superior and distant, the other god being the “just” and severe demiurge of the creation. We also encounter a Jesus who is by no means docetic, but a figure emphatically with a body. John Knox in 1942 listed the eight core theological tenets of Marcion. In another post we may look more closely at them, but suffice it here to say that not one of those core tenets is clearly reflected in the reconstructed Gospel of Marcion—and several are flatly contradicted. This is not merely unusual. It is impossible.

Where Marcion is concerned, then, we are presented with a grand dilemma. Either the theology attributed to the arch-heretic is in error, or the gospel reconstructed in his name is in error. No Bayesian Theorem is required to suspect the correct answer. After all, the theology of Marcion is extremely well attested (in the writings of numerous Church Fathers—see below). On the other hand, Marcion’s gospel is very poorly attested. In fact, not one of Marcion’s alleged writings (the Antitheses, his Gospel, and his version of the Pauline letters) is extant—they have all been tentatively reconstructed by scholars in modern times.

Attestations to the Gospel of Marcion

A review of the attestations regarding Marcion’s “gospel” in the ancient sources is most revealing. M. Vinzent discusses those sources in his recent book, Marcion and the Dating of the Synoptic Gospels (Leuven: Peeters, 2014). Vinzent provides over 150 pages under the rubric “Marcion, his Gospel and the Gospels in the Sources” (pp. 1–158). While his treatment (in my opinion) includes a good deal of speculation, Vinzent reviews the discussion of Marcion’s gospel by the following ancient authors and works, listed here in rough chronological order:

In the writings of the above Church Fathers one might expect to quickly come across unequivocal proof of Marcion’s gospel text, such as a citation: “We read the following words in the Gospel of Marcion…” After all, we have innumerable such citations for the canonical gospels. 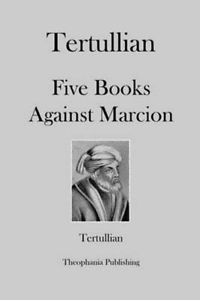 But no. From Justin Martyr we have only two vague surviving references to Marcion’s thought or to his gospel, but no citations (Vinzent pp. 10–12). Moving down the list, we are similarly disappointed… In fact, a conclusion astonishingly emerges: not a single textual quote or citation from Marcion’s gospel is provided by the first nine Church Fathers above. Nothing. Many of the passages noted by Vinzent indeed refer to Marcion’s “gospel,” but it is clear that the Church Fathers are, in all these cases, speaking of Marcion’s theology—that is, they are using the term evangelion in its non-textual sense (“good news, teaching, doctrine”). It is only when we come to Tertullian (writing in the early third century) that an argument can be mounted that Marcion wrote a gospel in the form of a text.

Indeed, in all the above ancient sources, Tertullian emerges, by far, as the most important potential witness to a textual gospel of Marcion. The mother lode of ‘evidence’ resides in Book 4 (125 pages) of his mammoth Against Marcion (in five books). From Book 4, we conclude that Tertullian indeed thought (or supposed) that Marcion wrote a gospel in the form of a text. Tertullian also seems to provide numerous passages from that gospel. Strangely, however, those passages are emphatically non-marcionite and come straight out of the Gospel of Luke! We will more closely consider Tertullian’s curious witness in a subsequent post.

Harnack, Knox, and recently Klinghardt (in other words, the entire history of marcionite scholarship) have unwittingly interpreted the ancient sources as referring to a text. They have then gone a step further and attempted to laboriously reconstruct that text. What they don’t seem to have realized, however, is that the entire argument essentially depends upon Tertullian—upon his suspect claims and equally suspect ‘non-marcionite’ readings of Marcion’s own gospel!