The Greek word euangelion (and its Latin equivalent, evangelium) is a critical and ambivalent term. It has two principal meanings: (a) “good news, doctrine, teaching”—this is the general, or abstract meaning; and (b) a written text combining the sayings and the doings (logia and praxeis) of Jesus in narrative form. The two meanings—general and specific—are encompassed by the English term “gospel.” After all, today we speak of gospel in the general sense (cf. the phrases “the gospel of Christ”; “My gospel is…”) and also in the more specific sense referring to one or another named Christian text (“the Gospel of Matthew”). In the Greek and Latin records, euangelion/evangelium has also encompassed both meanings—sometimes used side-by-side—from antiquity right up to the present day. 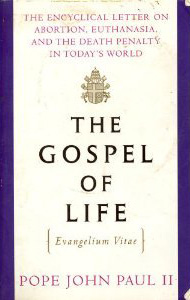 The use of “gospel” in the generalized sense is common even today.

In considering the “gospel” of Marcion, it may be that the general sense has been widely overlooked in favor of the textual sense. We must be alert to the fact that the textual meaning of euangelion did not exist prior to the invention of the gospel form as a written text. This should be obvious, but it gives the writings of the second century particular interest. For (as I have argued) it was in the second century that the Christian gospel genre first appeared. The textual sense of the word euangelion was new to people at that time. No doubt the word retained its older meanings of “good news, doctrine, teaching” until the Christian gospels as texts became well known. This is, in fact, exactly what we find in the sources: when referring to Marcion’s “gospel,” all the Church Fathers until Tertullian (early third century) use euangelion in its generic, non-textual sense (see prior post).

The ambivalent meaning of euangelion in ancient times is easily shown. In the following acerbic dialog reported by Adamantius, a fifth century Christian writer, I invite the reader to pay special attention to the use of the word “gospel.” In the following, I have marked each occurrence with a superscript G (“general meaning”) or T (“textual meaning”).

EUTROPIUS: How many apostles did Christ have?

ADAMANTIUS (a Christian): He first sent twelve to preach the gospelG; then, after this, seventy-two. So Mark and Luke, who were among the seventy-two, preached the gospelG along with the Apostle Paul…

MEGATHIUS (a Marcionite): I will demonstrate from elsewhere that the gospelsT are spurious. The Apostle says that there is one gospelG, but you people say that there are four.

AD: There are four who preached the gospelG, but one gospelG. They proclaimed one Christ, and are in agreement. Now, if each of them had proclaimed or preached a different Christ, you would be right, but if the four speak of one Christ, there are no longer four gospelsT but one.

AD: We also say that there is one gospelG, but there are four who preached the gospelG.

MEG: Nor are there four who preached the gospelG, but one, for he says, ‘[I am amazed that you should so soon be changing over to another gospelG]; there is not another according to my gospelG—but there are some who are troubling you, and want to pervert the gospelG of Christ into another’ [Gal 1:6–7].

AD: When Paul says there are more who preach the gospelG, how can you say that there is one?

MEG: He did not say that there are many preachers of the gospelG…

The above little exercise not only sensitizes the reader to the dual meaning of the word “gospel,” but also shows that in the fifth century the generic (non-textual) meaning of “gospel” was still prevalent. The exercise is also a useful prelude to ensuing posts in this series, which will look at how weak are the passages in Tertullian’s writings that form the basis for proposing a textual “gospel” of Marcion. 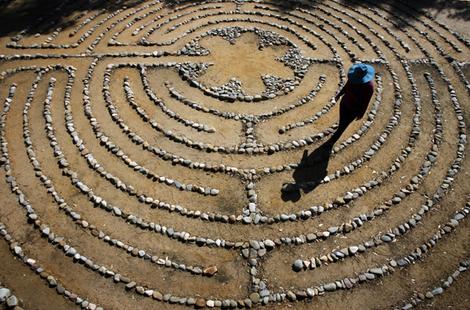 Going around in circles.
(A labyrinth at St Margaret’s Anglican Church, Eltham, UK.)

In any case, it is clear that two meanings of “gospel” are leading the above disputants in almost comical circles. More serious is the possibility that modern scholarship has, in the case of Marcion, also gone in circles—misinterpreting the word euangelion as “text” when it was actually intended to mean “teaching.” As a result, for almost two centuries now scholarship may have elaborated a written Gospel of Marcion when no such text ever existed!

This suspicion finds powerful support in the unacceptable results of modern scholarship respecting a written “Gospel of Marcion.” What scholarship has given the world is simply an impossibility: a supposed written “Gospel of Marcion” that contradicts Marcion’s own theology! Over the past two hundred years, scholarship has persistently concluded that Marcion presented a written gospel that was very much like the Gospel of Luke—only shorter. This is astounding, for how could Marcion have presented a gospel in Rome that centers around the fleshly figure Jesus of Nazareth? That figure—as portrayed in both the alleged “Gospel of Marcion” and the Gospel of Luke—flatly contradicts Marcion’s known docetic christology, whereby “Jesus” was a spiritual being! (This is the second stage of christology, outlined here.) Then again, the reconstructed Gospel of Marcion knows nothing of Marcion’s two gods—one distant and good, the other subordinate and creator. As has been noted in a prior post, of Marcion’s eight core tenets, not a single one is clearly evidenced in the scholarly reconstructions of the alleged “Gospel of Marcion.”

It is my contention that—until at least the time of Tertullian (whose extensive work on Marcion will be considered later)—all the references to a “gospel” of Marcion can be easily explained in terms of the general meaning of euangelion: a “teaching, doctrine, good news.” It seems to me, then, that in the 140s CE Marcion brought to Rome his “good news,” probably in the form of a series of ‘antitheses.’ Though the antitheses may have been written down, there is no evidence that any ‘gospel’ of Marcion with narrative of Jesus was written down. Indeed, this is ipso facto impossible, for Marcion did not believe that ‘Jesus’ had any flesh at all—ergo, no ‘narrative’ of Jesus is possible. The Jesus Marcion taught was a spirit. He could not have had a biography!

In sum, we may not have any clear evidence of a written gospel of Marcion at all. In the next post I will argue that our principal ancient source (Tertullian) reveals knowledge only of Marcion’s doctrine: his euangelion/evangelium.