It is possible to find isolated passages in Tertullian’s lengthy attack on Marcion that can be interpreted as if the Church Father is critiquing a text. One must be wary, however, of translation bias and equivocal words, such as “gospel/evangelium”—so frequent in Tertullian’s writing. That word has long since become synonymous with four well known Christian religious texts, and we have quite forgotten its older, more general meaning (“doctrine”)—prevalent when Tertullian was writing and before the canonical gospels had conquered the western world. 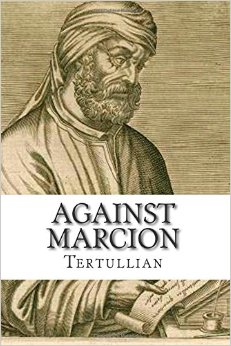 Another problem is that modern translations of Tertullian’s writings have been carried out under the false conviction that a text of Marcion was indeed the subject of the Church Father’s attack. The translators themselves use words in English like “published”, “interpolation”, “abridgement,” “mutilation”—words that (even unwittingly) reflect something physical, in this case a document. For example, “announced” or “made known” may be more appropriate than “published.” I have not studied the Latin manuscripts of the Church Father and have no plans to do so. Nevertheless—though I hardly suppose it will take place any time soon—what will eventually be necessary is a scholarly re-translation of much of Tertullian’s anti-Marcionite work, with the knowledge that the Church Father was combating a theology, not a text.

For over a century, the subfield of marcionite studies has been primarily engaged in reconstructing a text, one that is at odds with Marcion’s own theology. The resulting disconnect between text and theology has apparently been overlooked. But it is fatal. No amount of textual hokus-pokus can overcome this problem. If the reconstructions of Harnack, Knox, and Klinghardt do not reflect Marcion’s known theology, then they must be false.

Tertullian’s idea that a textual Gospel of Marcion was a mutilation/abridgement of the Gospel of Luke is equally false. And this idea was not original to Tertullian but has a pedigree. Polycarp (mid-II CE) had already enjoined the Philippians to repudiate those who “mutilate the logia of the Lord” (Polycarp, Phil. 7.2). Irenaeus (late II CE), a Church Father writing only one generation before Tertullian, expanded on this notion of doctrinal “mutilation” and explicitly applied it to Marcion (passage cited below). We now know that no such mutilation occurred—for Marcion’s doctrine came first. Marcion did not “mutilate” the logia (or the “Gospel of Luke”). Rather, the Gospel of Luke expanded (and reacted to) Marcion’s theology. The priority of Marcion’s theology was precisely what the several Church Fathers wished to obscure and deny! We thus see a sophisticated and calculated ‘bending of the evidence,’ accomplished across generations and involving the cooperation of several ecclesiastical leaders in disparate geographic areas.

In the case of Marcion, Irenaeus wrote: 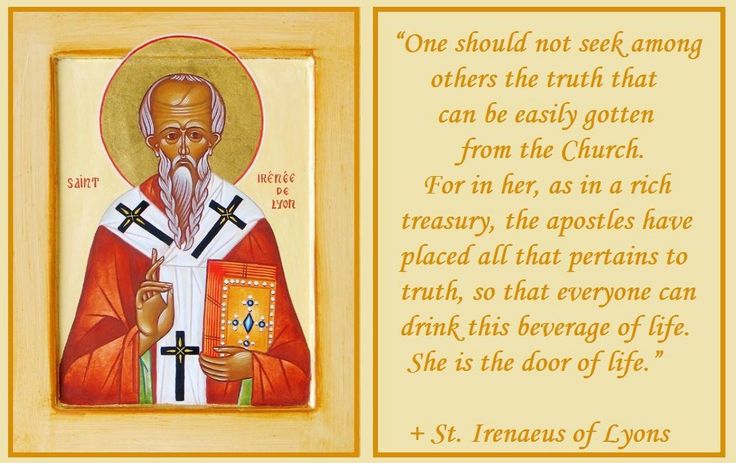 Marcion of Pontus succeeded [Cerdo], and developed his doctrine. In so doing, he advanced the most daring blasphemy against Him who is proclaimed as God by the law and the prophets, declaring Him to be the author of evils, to take delight in war, to be infirm of purpose, and even to be contrary to Himself. But Jesus being derived from that father who is above the God that made the world, and coming into Judea in the times of Pontius Pilate the governor, who was the procurator of Tiberius Caesar, was manifested in the form of a man to those who were in Judea, abolishing the prophets and the law, and all the works of that God who made the world, whom also he calls Cosmocrator. Besides this, he mutilates the Gospel which is according to Luke, removing all that is written respecting the generation of the Lord, and setting aside a great deal of the teaching of the Lord, in which the Lord is recorded as most dearly confessing that the Maker of this universe is His Father. He likewise persuaded his disciples that he himself was more worthy of credit than are those apostles who have handed down the Gospel to us, furnishing them not with the Gospel, but merely a fragment of it. In like manner, too, he dismembered the Epistles of Paul, removing all that is said by the apostle respecting that God who made the world, to the effect that He is the Father of our Lord Jesus Christ, and also those passages from the prophetical writings which the apostle quotes, in order to teach us that they announced beforehand the coming of the Lord. (Against Heresies, I.27.2; emphasis added.)

Tertullian took his cue from the above passage of Irenaeus. The accusation that Marcion “mutilated” the Gospel of Luke has continued to be the orthodox position in church and academe through the ages. A few scholars, however (Knox, Klinghardt, Vinzent) have now argued that the order of “gospels” must be reversed: Marcion first, then Luke. I, on the other hand, am arguing that even this is not enough: no reconstruction is correct, for the reconstructions inevitably produce a gospel that is theologically anti-marcionite, one that is a “little Luke.” (Knox suggested that Marcion’s gospel was in fact the Gospel of Mark.) This is obviously a non-starter. In Klinghardt’s recent and massive treatment of the “Gospel of Marcion,” we find a reconstructed gospel of the heretic which has not the least trace of docetism, of a higher god, or of the lower god (demiurge). Rather, we find the traditional wonder-working Son of God, Jesus, who is very much in the flesh and of the flesh. Some of the most troubling anti-marcionite passages, as proposed in Klinghardt’s reconstruction of Marcion’s own gospel, are:

• 11:40. “Did not he who made the inner also make the outer?” (Contrary to the Marcionite separation of the two gods)
• 12:24. “Consider the birds of the air. They do not sow or reap, neither gather they into barns, and yet God feeds them.” (Only one God is presented, and He is the God also of the creation.)
• 23:50. And see, a man by the name of Joseph took [the corpse], wrapped it with linens and laid it in a rock-hewn tomb. (Jesus emphatically has a body.)
• 24:36–43. And while they were still saying these things, he himself stood in their midst. Startled and afraid, they thought it was a phantom. But he said to them: “Why do you fear? See my hands and my feet, for a spirit has not bones, as you see that I have.” But they were yet unbelieving, and so he said to them: “Have you here something to eat?” They gave him a piece of cooked fish. And he took it and ate it before their eyes. (Jesus is emphatically fleshly.) 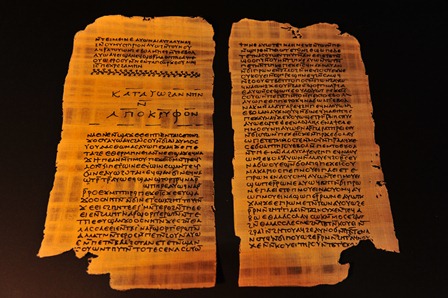 The last passage above appears to have been written expressly to contradict the Marcionite christology that we have identified as Stage 2 (see below). Indeed, none of the above passages would be remotely expected in a gospel espousing a docetist christology. Of all the gospels as text known to us, the most “Marcionite” would probably be the Gospel of Thomas. After all, in that work Jesus is the incorporeal voice of the saving gnosis, the flesh is consistently disparaged, and encratism is a hallmark of the holy life. Though few scholars today would link the Gospel of Thomas with marcionism, to me these appear theologically very close.

In any case, to suppose that the above passages (and more can be found) were in a gospel by Marcion is ludicrous. The grand locomotive of marcionite scholarship has apparently gone off the rails. The train needs to be put back on a different track…

Tertullian is by far the most important writer supplying knowledge of Marcion and his theology. Any verdict that encompasses his Against Marcion must carry the day. With this in mind, we are now able to add Tertullian to the nine Church Fathers before him (the list is here) who fail to supply evidence for a “Gospel of Marcion” as text. Later information on Marcion supplied by Origen (Celsus), Adamantius, and the Muratorian Fragment do not alter this view.

We can now place Tertullian’s work in a broader context. Against Marcion is a landmark work in the battle of christologies: Stage 3 against Stage 2. Tertullian is one of the most important (and successful) champions of the new christology centering around Jesus of Nazareth. By defending the flesh of Christ, this Church Father hammered the coffin lid down on the older christology whereby Jesus was purely spiritual, whereby anyone could become “a Jesus,” and whereby the creation, and all things material, were somehow evil. These were Tertullian’s battles, as we also see in some of his other anti-Marcionite titles: “On the Flesh of Christ”, “On the Resurrection of the Flesh”, etc. 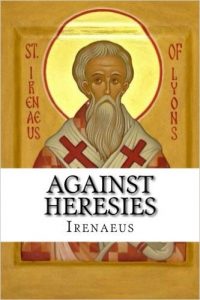 Irenaeus, too, was a stalwart opponent of docetism. One scholar observed long ago:

Christ, [Irenaeus] contends against the Gnostics, must be a man, like us, if he would redeem us from corruption and make us perfect. As sin and death came into the world by a man, so they could be blotted out legitimately and to our advantage only by a man; though, of course, not by one who should be a mere descendant of Adam, and thus himself stand in need of redemption, but by a second Adam, supernaturally begotten, a new progenitor of our race, as divine as he is human. (P. Schaff, “History of the Christian Church,” 1888, vol. 2, p. 556.)

In this battle of christologies—for and against the flesh—Irenaeus, Tertullian and the other Church Fathers were successful. Marcion’s docetism, and the first century conception of Jesus as a universal indwelling spirit apart from the flesh would soon be forgotten. That earlier theology has been sternly suppressed. To understand Christian origins, however, we must see past ‘Jesus of Nazareth’ and resurrect the earlier view.

Eventually, of course, we will have to go back farther still, to Jesus as the redeeming gnosis (Stage 1)—an entirely secular notion that requires no god. In fact, this stage is still apparent in many pithy logia and parables found in the canonical gospels, in the Gospel of Thomas, and in some apocryphal texts. That early and authentic gnostic stage predated even Marcion. It is not the subject of this series of posts, but properly belongs to other investigations.

[NOTE: The new research presented in this series on Marcion will necessitate revision of a few prior posts on this website, including removing a written “Gospel of Marcion” from the stemma of synoptic gospel formation presented here and here. — R.S.]