As noted in the Introduction, in this series of posts I will be attempting a reconstruction of the earliest Gospel of Mark—a text that I identify with the “Hebrew Gospel” (a view, incidentally, not found anywhere else). Each post will deal with a separate chapter, and two versions will be offered: (1) a short, hypothetical “core”—the first draft of a Hebrew Gospel/UrMark reconstructed according to several criteria (see next paragraph); and (2) the entire chapter in the English translation (RSV). Both the short and the received versions will be color coded.

In order to separate out later Catholic accretions from the earlier pauline-marcionite “core,” I use six basic criteria:

(a) Jesus is a spirit who indwelled a human prophet (Stage 2 christology)
(b) The god expressed by the spirit Jesus (and by the prophet who was its mouthpiece) is entirely spiritual and ontologically distinct from the material creation
(c) The god manifested by the spirit Jesus is not the Yahweh of Judaism
(d) The god manifested by the spirit Jesus is a god of pure love
(e) Those around the prophet (the Jewish “apostles”) understood neither him, his message, nor the god that he taught. (However, Marcion’s mentor Paul understood.)
(f) The many miracles and astounding physical interventions (Jesus “come with power”) are later Stage 3 additions. They are inconsistent with the spirit Jesus that has no involvement with materiality. They must be deleted from the original record.

Applying the above six criteria—to Mark 1, at least—elevates the status of John the Baptist considerably. In the original gospel as we have it, a critical passages reads: 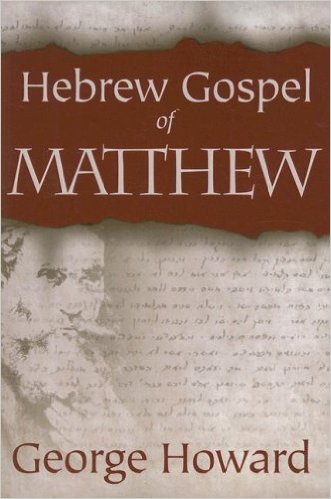 This is a pivot point in the Gospel of Mark, where the evangelist passes from the account of John to begin his extended account of Jesus the Nazarene. It is worded in such a way that John and Jesus are clearly separate people—John is already in prison when Jesus appears. However, clues remain to show that this literary pivot is artificial. The most obvious is that the message of repentance preached by John in v. 4 is the message preached by Jesus in v. 15. A further clue is in GMt, where the words of John are later placed verbatim in the mouth of Jesus—cp. Mt 3:10 and 7:19. In the Gospel of Luke, John and Jesus are cousins with parallel birth stories. All these resonances between John and Jesus support the view that at an early stage they were one.

Two articles on this website (one by Robert Price, and one by Georges Ory) propose that John was Jesus. Astonishingly, there also exists a Christian text that states bluntly: “John is Jesus.” Those provocative words appear in the allegedly medieval—but possibly ancient—and long neglected text: Hebrew Gospel of Matthew (G. Howard. Macon: Mercer Univ. Pr., 1995 p. 11, in connection with Mt 3:10).

Thus, a substantial body of work (admittedly from the liberal and mythicist perspectives) has presented various reasons to suspect that John and Jesus were, in some way, one. In this light, it would be the simplest thing to amend Mk 1:14–15 to read: [John said] “The time is fulfilled, and the kingdom of God is at hand; repent!” This is the reading I have adopted below. It conforms to the early Stage 2 christology outlined elsewhere: John resumes his original place as the prophet in whom the spirit Jesus dwelled, or upon whom the spirit Jesus rested.

Consequently, I add a provisional seventh criteria to those above:
(g) John was “Jesus.”

As I have not yet worked through the entire Gospel of Mark, for the moment I leave this astonishing criterion in “indeterminate” status—applied, nevertheless, to Chapter 1 below. This seventh criterion clarifies the nature of UrMark: a text reflecting a spirit-imbued prophet whose earthly name was John.

[1] The beginning of the gospel.

[10] When [John] came up out of the water [of gnosis], immediately he saw the heavens opened.

[21] And [he] went into Capernaum; and immediately on the sabbath he taught.
[22] And they were astonished at his teaching, for he taught them as one who had authority, and not as the scribes.
[24] [They] knew who he was: the Holy One of God. [Gk: Nazaréne]

[27] And they were all amazed, so that they questioned among themselves, saying, “What is this? A new teaching!”
[28] And at once his fame spread everywhere throughout all the surrounding region of Galilee.

[35] And in the morning, a great while before day, he rose and went out to a lonely place, and there he prayed.
[37] And they found him and said to him, “Every one is searching for you.”
[38] And he said to them, “Let us go on to the next towns, that I may preach there also.”
[39] And he went throughout all Galilee, preaching.

[STAGE 1: To c. 50 CE. “Jesus” is the saving gnosis.]
Black: Possible/probable in UrMark (Pre-Marcionite/Pre-Pauline).
Green: Uncertain in UrMark, or amended.
[STAGE 2: C. 50–c. 150 CE. “Jesus” is a divine spiritual entity indwelling the human being through the grace of God/obedience to God (both doctrines are attested). Jesus enables repentance and the forgiveness of sins.]
Purple: Pauline/Marcionite
[STAGE 3: C. 150+. “Jesus of Nazareth” is the savior of the world. Gnosis, repentance, and forgiveness of sins have been superseded. Belief is required.]
Red: Catholic.
Red underlined: Catholic and anti-Marcionite.

[1] The beginning of the gospel of Jesus Christ, the Son of God.
[2] As it is written in Isaiah the prophet, “Behold, I send my messenger before thy face, who shall prepare thy way;
[3] the voice of one crying in the wilderness: Prepare the way of the Lord, make his paths straight—”

[4] John the baptizer appeared in the wilderness, preaching a baptism of repentance for the forgiveness of sins.
[5] And there went out to him all the country of Judea, and all the people of Jerusalem; and they were baptized by him in the river Jordan, confessing their sins.
[6] Now John was clothed with camel’s hair, and had a leather girdle around his waist, and ate locusts and wild honey.
[7] And he preached, saying, “After me comes he who is mightier than I, the thong of whose sandals I am not worthy to stoop down and untie.
[8] I have baptized you with water; but he will baptize you with the Holy Spirit.”

[9] In those days Jesus came from Nazareth of RS Galilee and was baptized by John in the Jordan.
[10] And when he came up out of the water, immediately he saw the heavens opened and the Spirit descending upon him like a dove;
[11] and a voice came from heaven, “Thou art my beloved Son; with thee I am well pleased.”

[12] The Spirit immediately drove him out into the wilderness.
[13] And he was in the wilderness forty days, tempted by Satan; and he was with the wild beasts; and the angels ministered to him.

[16] And passing along by the Sea of Galilee, he saw Simon and Andrew the brother of Simon casting a net in the sea; for they were fishermen.
[17] And Jesus said to them, “Follow me and I will make you become fishers of men.”
[18] And immediately they left their nets and followed him.
[19] And going on a little farther, he saw James the son of Zebedee and John his brother, who were in their boat mending the nets.
[20] And immediately he called them; and they left their father Zebedee in the boat with the hired servants, and followed him.

[21] And they went into Capernaum; and immediately on the sabbath he entered the synagogue and taught.
[22] And they were astonished at his teaching, for he taught them as one who had authority, and not as the scribes.

[23] And immediately there was in their synagogue a man with an unclean spirit;
[24] and he cried out, “What have you to do with us, Jesus [the Nazarene; Gk. Iésou Nazaréne]? Have you come to destroy us? I know who you are, the Holy One of God.”
[25] But Jesus rebuked him, saying, “Be silent, and come out of him!”
[26] And the unclean spirit, convulsing him and crying with a loud voice, came out of him.
[27] And they were all amazed, so that they questioned among themselves, saying, “What is this? A new teaching! With authority he commands even the unclean spirits, and they obey him.”
[28] And at once his fame spread everywhere throughout all the surrounding region of Galilee.

[29] And immediately he left the synagogue, and entered the house of Simon and Andrew, with James and John.
[30] Now Simon’s mother-in-law lay sick with a fever, and immediately they told him of her.
[31] And he came and took her by the hand and lifted her up, and the fever left her; and she served them.

[32] That evening, at sundown, they brought to him all who were sick or possessed with demons.
[33] And the whole city was gathered together about the door.
[34] And he healed many who were sick with various diseases, and cast out many demons; and he would not permit the demons to speak, because they knew him.

[35] And in the morning, a great while before day, he rose and went out to a lonely place, and there he prayed.

[36] And Simon and those who were with him pursued him,
[37] and they found him and said to him, “Every one is searching for you.”
[38] And he said to them, “Let us go on to the next towns, that I may preach there also; for that is why I came out.”
[39] And he went throughout all Galilee, preaching in their synagogues and casting out demons.

[40] And a leper came to him beseeching him, and kneeling said to him, “If you will, you can make me clean.”
[41] Moved with pity, he stretched out his hand and touched him, and said to him, “I will; be clean.”
[42] And immediately the leprosy left him, and he was made clean.

[43] And he sternly charged him, and sent him away at once,
[44] and said to him, “See that you say nothing to any one; but go, show yourself to the priest, and offer for your cleansing what Moses commanded, for a proof to the people.”
[45] But he went out and began to talk freely about it, and to spread the news, so that Jesus could no longer openly enter a town, but was out in the country; and people came to him from every quarter.