In any very large endeavor—as is the exploration of Christian origins—from time to time an intellectual synthesis is required, one that attempts to pull together various lines of research. Without such a synthesis, the world of early Christian studies quickly becomes a bewildering quagmire, with myriad disparate elements and little overall unity. So, I’d like to provide my personal synthesis regarding a critical text: the Gospel of Mark. This will take the form of a series of posts—one post for each of the sixteen chapters of that gospel. Recognizing that I may well be quite wrong in this venture, I candidly call it an “experiment.”

The Gospel of Mark was in reaction to Marcion’s teaching

After many generations of dealing with the Synoptic Problem, the overwhelming conclusion of New Testament scholars is that the Gospel of Mark was the earliest canonical gospel. I accept this view. It is also quite evident to me that the order of production was Mark – Matthew – Luke. 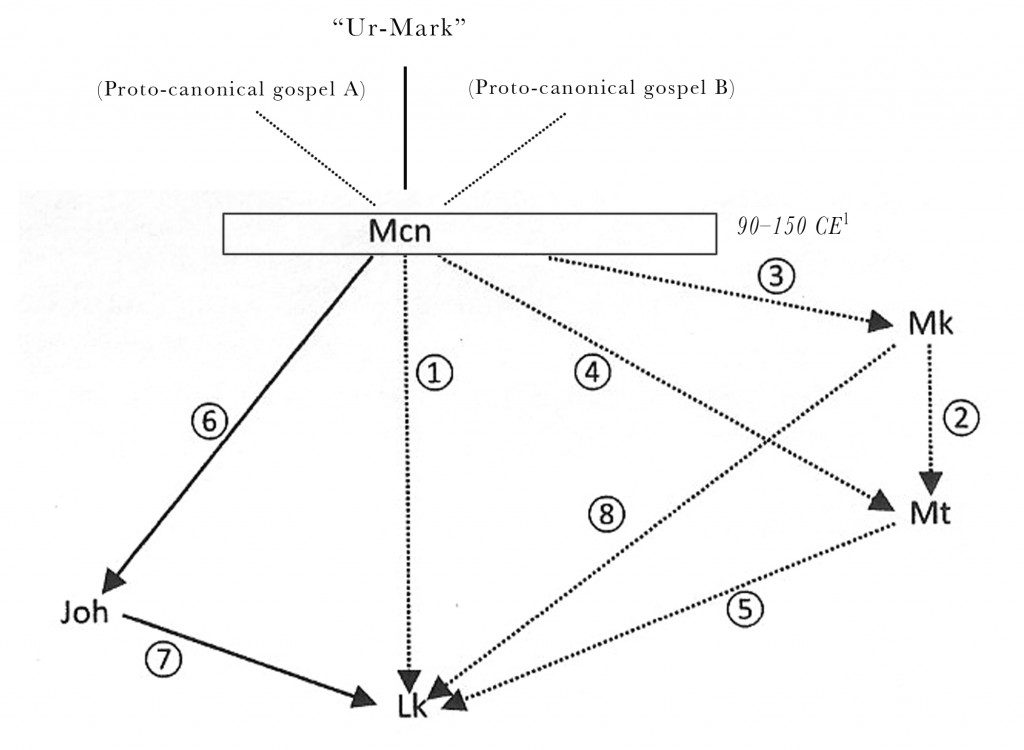 The synoptic schema favored by M. Klinghardt, adapted from his 2015 volumes (I:272).
Klinghardt postulates one or more pre-Marcionite/proto-canonical gospels.
While Klinghardt considers the Gospel of Marcion (“Mcn”) to have been a text and dates it 90–150 CE, the present writer considers it a theology (“gospel” in the general sense). The purpose of this series of posts is to attempt a reconstruction of “Ur-Mark” as postulated above.

It is now also clear to me that all the canonical gospels were written in the second century, not the first. They presuppose the existence of brick and mortar synagogues, of Pharisees in the Galilee, and they reflect a time when Catholic Christianity had already moved into the diaspora and was no longer Jewish in any meaningful sense.

Furthermore, long-standing research has shown that Marcion of Pontus played a critical role in gospel formation. My recent series of posts “Questioning the Gospel of Marcion” has argued that Marcion did not actually produce a written text. His theology was his “gospel” (the meaning of the term evangelion being narrowly [and falsely] interpreted by modern pundits). And that theology preceded the writing of the canonical gospels—it even provoked them. If all this is correct, then we may conclude: 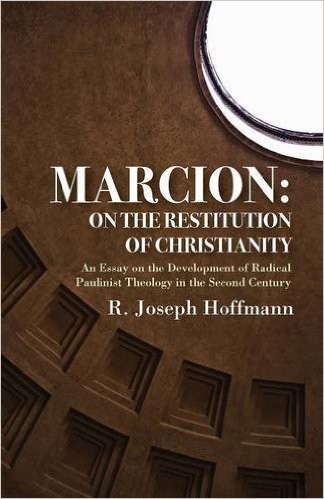 Marcion’s theory of false apostleship finds specific refutation in the NT as well, both in the expanded edition of his gospel (“Luke”), and in the work by the same writer which has come down in the tradition as the Acts of the Apostles. In these works, Marcion’s theory is countered by a correction of the apostolic witness read back into the life of Jesus himself, and certified by the gift of the Holy Spirit in Acts 2:1 ff. The post-resurrection appearances of Jesus and the further teaching activity associated with these appearances respond, on this reckoning, to Marcion’s belief that the earliest disciples of Jesus had misunderstood his message and the revelation granted to them. (R. Hoffmann, “Marcion, On the Restitution of Christianity: An Essay on the Development of Radical Paulinist Theology in the Second Century.” Chico: Scholar’s Press, 1984, pp. 113–14.)

While I disagree with some views presented in Hoffmann’s book, the above seems correct to me. Hoffmann goes on to detail passages in the canonical gospels that can be convincingly explained as rebuttals of Marcion’s theses. Those theses, as we know from the voluminous writings of the Church Fathers (especially Tertullian), included Marcion’s belief in a wholly spiritual and transcendent god, one that has no truck with the creation or with materiality. This, of course, could not be the god of the Jews, and hence Marcion placed a wedge, as it were, not merely between the transcendent god and Yahweh, but also between the new Christian religion and Judaism.

One notices in the above diagram that Klinghardt proposes an “UrMark” preceding the time of Marcion. We are now speaking of the first century CE, an era I have called “Stage 2”. This stage of early Christianity was characterized by belief in a spiritual Jesus that indwells the human being.

There were two principal forms of Stage 2 christology: the Jewish Christian on the one hand, and the Pauline on the other. Though these two outlooks shared the basic theology of the indwelling spiritual “Jesus,” they were incompatible in a number of ways. The most important, perhaps, is that—according to Paul—God intervened in history at a critical point in time in the past, namely, in the life of a certain prophet from Judea. That prophet possessed the indwelling spirit of Jesus, and the prophet gave his life on the cross for the redemption of mankind from sin.

For both Paul and the Jewish Christians, the indwelling Jesus comes to anyone by the grace of God and by being worthy of receiving “the Jesus” (see the Apocryphon of James, Apocalypse of James, etc). But only Paul knew the cosmic redemption on the cross—at some time in the distant past—of a special prophet who showed the way, for he was imbued (for the first time) with the spirit “Jesus.” This conception is the heart of the Christian religion that we know today. In Jewish Christianity, however, there was no theology of the cross, no redemption, and no vicarious atonement from sin through belief.

Another major difference between the two “Stage 2” theologies has to do with the creation/materiality. In conformity with Judaism as a whole, Jewish Christianity viewed the creation as good, as the product of the one and only God, Yahweh. In contrast, we see from the epistles that Paul viewed the creation with suspicion. The resurrection is not in the flesh (1 Cor 15), one dies and is raised inwardly (Col. 2:20; 3:1), and Paul’s revelation was strictly spiritual and “not of human origin” (Gal 1:11). The latter views also cohere with Marcion’s thought.

The question now arises: if UrMark existed (as Klinghardt and others have postulated), and if it dates to the first century CE, then to which of the two incompatible theologies did it belong—the Pauline, or the Jewish Christian?

This important question can be answered by several pieces of indirect evidence:

(1) We know of the existence of a lost “Hebrew Gospel,” a work that preceded the canonical gospels (see Edwards) and which was clearly Jewish Christian in nature. The Hebrew Gospel was in all likelihood also known by the names “Gospel of Ebionites” and “Gospel of the Nazoraeans.”
(2) In the history of theology, the Jewish Christian preceded the Hellenist/Pauline. This is clear in all the various traditions, where Paul is always a “latecomer.”
(3) The Dead Sea Sect is dated to the turn of the era/first century BCE. I have argued that Qumran was, in fact, the intial form of Jewish Christian theology. Not to be overlooked in this connection is the term “Damascus,” which links Paul (converted “on the way to Damascus”) with Qumran (known in the DSS as “Damascus”).

Thus, it is fairly clear that UrMark was pre-Pauline and belongs to the Jewish Christian stage. The amazing inference is now at hand: “UrMark” was the “Hebrew Gospel”! This conclusion now seems virtually certain to me.

We must now update the above chart (proposed by M. Klinghardt) in significant ways. Instead of “UrMark” at the beginning, we have the Hebrew Gospel. Furthermore, we have learned (through the series of posts beginning here) that the “Gospel of Marcion” was not a written text but a theology. Thus, that mythical text must disappear from the stemma of gospel formation. A new—and simplified—stemma now emerges: 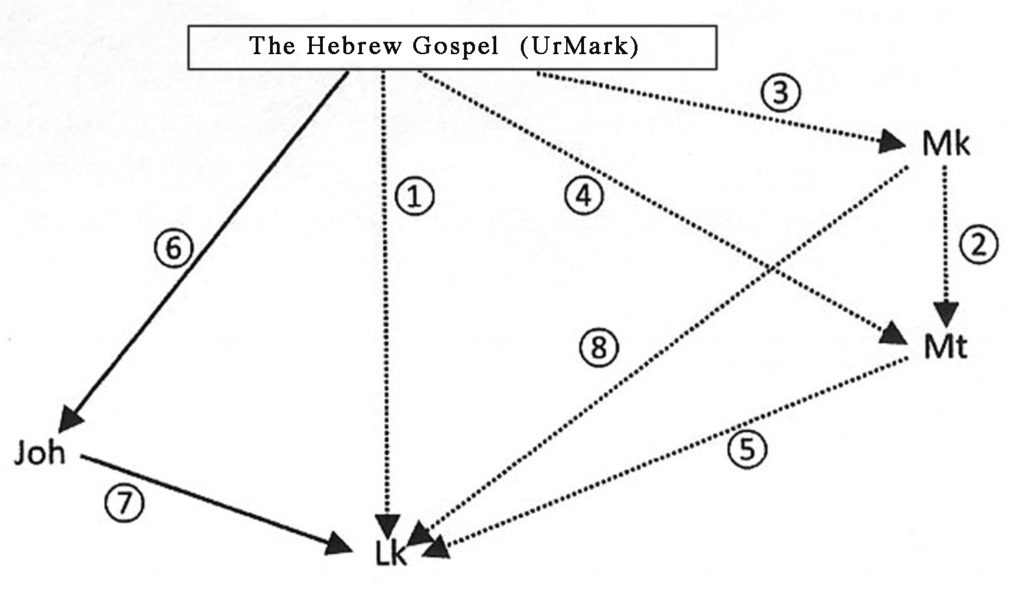 Retaining Klinghardt’s “arrows” above, it now becomes astonishing how great an effect the Hebrew Gospel exerted on the entire canonical tradition. According to the above, even the Gospel of John was dependent upon an early Jewish Christian source.

If correct (and at this time it is, of course, no more than a hypothesis), this second revised chart offers enormous fertile ground for synoptic work. In the ensuing posts, however, I will concentrate exclusively on the arrow numbered “3” above: the pathway from the Hebrew Gospel/UrMark to the canonical Gospel of Mark.

My plan is to offer one post for each chapter of the Gospel of Mark, attempting with each chapter to ‘tease out’ the original text of the Hebrew Gospel/UrMark. The criteria used are presented here. Further explanation will be presented with the chapters, as necessary.

Nature. UrMark was a Jewish Christian document. It was doubtless identical to the lost Hebrew Gospel: “Therefore Matthew put the logia in an ordered arrangement in the Hebrew language and interpreted them as best he could” (Papias, c. 125–160 CE, as reported by Eusebius, c. 320 CE. Incidentally, the association of “Matthew” with the Hebrew Gospel is probably not original but goes back only as far as Irenaeus—see here.) The best way to extract the Hebrew Gospel/UrMark from the present Gospel of Mark is (1) to remove all Pauline/Marcionite elements; and (2) to remove all “Stage 3” late Catholicizing elements (see here for analysis).

Character. The Hebrew Gospel/UrMark belongs to what I call “Stage 2” (c. 50 CE–150 CE). This was after the initial gnostic stage of Christianity (“Stage 1,” c. 50 BCE–50 CE) but before the Catholic “Stage 3” centered around the figure Jesus of Nazareth (c. 150 CE+). In Stage 2, “Jesus” (Savior in Hebrew) is the divine indwelling spirit. For the Jewish Christians (see especially the apocryphal Jamesian literature), this indwelling spirit is transferable, teachable, and holy. The individual in whom the spirit Jesus dwells can perform the miraculous, though he is not himself the infinite God Yahweh. God is not of the flesh but is creator of the flesh. Jewish scripture and praxis are honored.