Note: Since originally writing this post I have concluded that “Marcion” did not exist as a historical figure. He was invented by the fledgling Church and used as a proxy for all the pre-Catholic Jesus followers who clung to the ‘Jesus as spirit’ theology. See here.—RS

No doubt readers will be astonished to learn that the name “Mark” is not attested in the Christian tradition before the latter half of the second century CE. While this is explained below, I begin with another name: that of the arch-heretic Marcion. I do this because (perhaps even more astonishing) a survey of Christian writings shows that the invented figure “Marcion” appears (cf. Justin Martyr) before the host of other invented figures that populate the New Testament gospels—from Peter, James, John, and on down…

Accordingly, we begin with “Marcion” and then progress to that name’s cognate, the invented “Mark.”

“Marcion” means “Little Mark” in Greek. For a Roman, it could be a so-called cognomen—assumed by the bearer in endearment or assigned by others in disparagement. Given Marcion’s role in the history of Christianity, however, we must also consider the possibility of some connection between his name and that of the better known “Mark,” apostle of Jesus and alleged author of the earliest canonical gospel. I don’t maintain here that such a historical connection is likely—merely that it should be checked off the list of possibilities, much like checking off a box on a questionnaire. So one asks: Is there a connection between the names “Marcion” and “Mark”?

Of course, there is a formal etymological connection: as mentioned above, “Marcion” means “Little Mark.” What we want to know, though, is if there is a connection between “Marcion” and the apostle “Mark” (both invented figures). Certainly, there is nothing to indicate identity, or even contemporaneity. After all, mainstream scholarship supposes that Mark lived in the first century (“the interpreter/herméneutés of Peter” according to Papias) while Marcion lived well into the second century.

Upon closer inspection, however, we learn that the words of Papias noted above date not to Papias (mid-II CE) but much later—they are attributed to Papias by Eusebius in early IV CE. I personally have learned to be very suspicious of such attributions by the Church Fathers—they have often proven false, made for convenience, or even invented. Thus, the words of Papias above, as regards Mark being an “interpreter” of Peter are, for all practical purposes, historically worthless. [In a later post I conclude that “Papias” was equally a fiction.—R.S.]

Klinghardt, Vinzent, and some others have implicated Marcion in the very genesis of the synoptic gospels (see here). Thus, a surprising intersection exists when it comes to the earliest gospel—that honor has been claimed for both Marcion and his cognate Mark. I have personally argued that “Marcion” authored no gospel as text but recognize that his theology (euaggelion) probably preceded the writing of the synoptics. Indeed, such seems to be the conclusion of an increasing number of scholars in the ‘higher criticism.’ Thus, whether Marcion did or did not have a written gospel, he and his theology preceded and certainly informed the subsequent development of the New Testament.

While it is possible to argue that the etymological affinity between the names “Marcion” and “Mark” is merely coincidental, it is much more difficult to argue that such similar names informed two opposing traditions regarding the earliest gospel—one heretical, the other canonical—and that they also did so purely by coincidence. The difficulty increases if one argues that “Marcion” is a nickname of disparagement given by the tradition: the “lesser Mark.” Yet such an argument fits in quite well with the principal accusation of the Church Fathers, namely, that Marcion “mutilated” the Gospel of Luke. For the Church, Marcion’s gospel (whether written down or not) was not acceptable. It was indeed a “Little Mark.” Hence, one could argue that its proponent/author was merely “Marcion.”

In this case, “Marcion” would not have been the heretic’s real name. Such a possibility puts us on notice that “Marcion” could be a cipher, a disparaging nickname for someone else in early Christian history. This is only a possibility, however, and—truth be told—it seems fairly remote. Justin Martyr’s First Apology (Chps. 26 and 58, written c. 150 CE), betrays no indication that Marcion is a cipher. The Church Father appears to be writing about a real heretic who is still alive. [That appearance, I would later recognize, is artificial.—R.S.]

The gospel and name “Mark”

The name “Mark” has an interesting history in Christian literature. It may come as a surprise for readers to learn that, in fact, it has no history in Christian literature before the middle of the second century! The earliest Christian texts (including the Odes of Solomon, the Didache, the Shepherd of Hermas, and the Gospel of Thomas) make no mention of Mark. As regards the Church Fathers, we note the following:

-PAPIAS. In a famous passage we are told that Mark was the “interpreter of Peter, wrote down accurately everything that he remembered… made no mistake… [and] took care not to omit anything that he heard, or to set down any false statement therein.” Critical as these statements are for the priority and importance of Mark in the entire gospel tradition, we immediately recognize that they have absolutely no evidentiary value—they come from the hand of Eusebius (HE 3.39.14-17) and date to over one hundred and fifty years after the death of Papias! The suspicion is at hand that Eusebius (as usual) was simply engaged in rewriting history as he and the Church wished it to be. 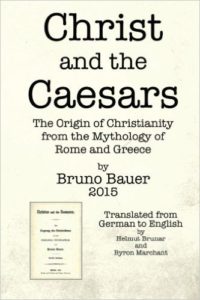 Now, “John whose surname was Mark” appears in the canonical Acts of the Apostles (12:12, 25; 15:37), at Acts 15:39 (with Barnabas), and also in 2 Timothy 4:11. H. Detering (1994:49, following B. Bauer) dates Acts to the mid-second century. So, it seems that the name “Mark” is attested from then onwards. Irenaeus (Adv. Haer., c. 180 CE) mentions Mark numerous times. And then we’re off to the races—“Mark” is subsequently everywhere! Incidentally, Irenaeus is also the culprit whom I have implicated in these webpages as ‘seeding’ many a false claim… We recall that he did so with the Hebrew Gospel, falsely attributing it to “Matthew.” Irenaeus also was apparently the first to claim that Marcion mutilated the Gospel of Luke (thus reversing the actual chronology)… Each of these bogus claims was enthusiastically taken up and expanded by later generations of Church Fathers, eventually becoming part of ‘unassailable’ tradition.

The extent of this particular subterfuge regarding “Mark” is mind-numbing. Reflect for a moment that the commonly accepted date of the Gospel of Mark is 66–70 CE (thus Wikipedia). That’s two and one half centuries before Eusebius of Caesarea was writing. Now, Eusebius was first responsible for the attribution of the gospel (which itself is anonymous) to Mark, even though he claimed that attribution goes back to Papias (in the passage noted above). So we see, once again, that a convenient and thoroughly false version of Christian history has been constructed and spoon-fed to a gullible Christendom by the “Church Fathers”—hired hands who were writing decades, even centuries, after the fact.

We are only beginning. In the next post we look at another august name, and we will no doubt be equally astonished at how very late it appeared in the Christian texts…