In this series of posts I’ve tried to show that the Price-Ehrman debate suffered largely because the two principals play by vastly different ground rules. It’s hard to have a meaningful (much less an exciting) exchange of ideas if the assumptions, acknowledged experts, and evidence are so dissimilar. This reminds me of the global warming debate, or of the long-standing evolution-creationism debacle. In all these cases what seems obvious to the scientist is contested—inevitably because a very powerful anti-scientific agenda is in play. 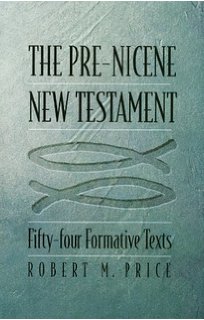 As James Crossley noted in the post-debate conversation,[minute 49] “Paul” is a case in point. For Ehrman and mainstream scholarship, the Apostle was real, a convert to Christianity only a few years after the execution of Jesus, and the author of seven epistles under his name. For Price and a growing contingent of mythicists, however, none of the epistles are pauline and the apostle is in all likelihood a second century fiction. (See the chapter “By Posthumous Post” in Price’s The Amazing Colossal Apostle, and also his prefaces to the epistles in the Pre-Nicene New Testament.)

Contrasting views regarding Paul are not the only reason mythicists and historicists today speak different languages. We now must also bring in the thesis—seriously discussed also by a few historicists—that the canonical gospels are in fact post-marcionite productions. They do not come from the first century, as has been axiomatic for generation after generation. The growing body of literature underpinning this and other important issues that threaten the tradition (below) continues to be obstinately ignored by mainstream scholarship.

Such shunning, however, does not mean that the evidence is going to simply disappear—as in the past, when books (and heretics) could simply be burned. In the age of the Internet, of an increasingly secular western culture, and of ‘publish or perish,’ we can all expect that the quantity of information will continue to expand exponentially. The idea of Jesus mythicism is abroad (e.g., witness Bart Ehrman’s own book Did Jesus Exist?). The genie is now out of the bottle, and no amount of shunning will put it back in. 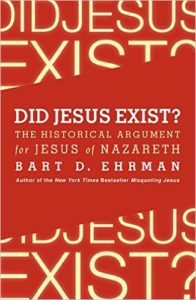 The disconnect between Ehrman’s words and what generations of scholars from Bauer to Brodie have brought forward amounts to the rejection of evidence and science. This is nothing new in the domain of religion. What is new, however, is the increasing visibility of that evidentiary rejection. The constipation that has now taken hold of even mainstream biblical scholarship does not sit well with more free-thinking scholars. Like Brodie, Avalos, Loftus, and Macdonald—to name but a few—we should expect more rebels from the academy in the near future.

Regarding the evidentiary basis for Price’s views in this debate, we now have compelling, well researched grounds to conclude that:

(1) the Pauline epistles are all inauthentic (the Dutch Radical School, Detering, Price);
(2) the Pauline epistles were all unknown before the time of Marcion (as was the name “Paul”);
(3) all four canonical gospels are post-marcionite, second century productions (Klinghardt, Vinzent, Detering, etc.);
(4) narrative material in the canonical gospels borrows extensively from the Old Testament (Brodie) and from Homer (Macdonald);
(5) neither Nazareth nor Bethelehem of Judea existed at the turn of the era (Salm, Oshri).

To the above I would personally add: (6) a widespread (first century) Jesus-as-spirit christology preceding the (second century Catholic) Jesus-as-flesh christology (Salm 2015: Chp. 14).

With the exception of number (6), each of the foregoing is now supported by a considerable body of detailed scholarly work. The fact that these points are still invisible to the vast majority of New Testament scholars—or, at best, are on the fringe of their awareness—is remarkable. It is as if creationism were taught in universities throughout the land to the exclusion of evolution. The evidence is there. It is empirical. If New Testament scholars wish to be scientists, as they claim, then they must break out of the old vise-grip of tradition and incorporate the above points into their basic calculus.

And those points lead away from Jesus historicism to Jesus mythicism…

I’m going to close this series of posts where it all begins and ends for Ehrman. For him, it never was about evidence. When push comes to shove, it boils down to credentials—and then some. As we’ve seen, not even credentials are enough for him. After all, Robert Price has more credentials in the field (two doctorates) than Bart Ehrman (one doctorate). So, Ehrman raises the bar of ‘trustworthy scholar’ another couple of notches to exclude the likes of Price: professorship at a prestigious institution of higher learning, publication by the biggest presses—whatever it takes to keep the mythicist riff-raff out.

As we saw in the preceding post, the issue for Ehrman is not so much the evidence as who brings it. Indeed, “evidence” does not exist until and unless it is rubber-stamped by members within the guild. Thus, for over a hundred years, a rather exclusive club has functioned as gate-keeper.

In their defense, biblical studies professors commonly assert that they have studied their subject matter and have paid their dues for long years. They acknowledge that they act as a filter, but it is a necessary filter—to keep out untrained opinions. It sounds reasonable—doesn’t it? 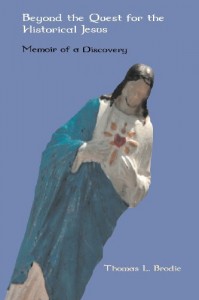 There’s an old problem: human nature. I hate to bring it up, but most people don’t pay their dues “for long years” unless there’s a paycheck at the end of the road. And that’s why Ehrman is wrong. Like everybody else, academics need to make a living. I mean, who’s kidding who? Those within the guild have jobs to lose. And, believe me, jobs have been lost in the scholarly history of mythicism (Fr. Thomas Brodie is the most recent casualty). Academics in the field today won’t—can’t—touch mythicism with a ten-foot pole. The colossal professional dynamic operating against Jesus mythicism is obvious, and this is why the valuable evidence disproving the historicity of Jesus is coming in dribbles from outside the guild and now from its fringes.

Ehrman would say to someone like me: “Why don’t you get a Ph.D? Why don’t you publish with the Oxford or Harvard University Press? Why don’t you get a professorship at a reputable university?” Such questions are a red herring. I have known for decades that—given my provocative views—no job would await at the end of such a course of academic brainwashing. So, my short answer: “I don’t have the time to waste.”

Thus, the issue in a debate between Jesus mythicism and historicism is far deeper than content. For Ehrman and the thousands of bread-and-butter professors, pastors, and priests making a living off of Jesus of Nazareth, denial of the Savior’s existence is not only an attack on dogma but also an attack on their livelihood. It cannot be allowed to rise to the status of being either substantive or respectable. Ehrman confirmed as much when, half way through the debate, he exclaimed, “Mythicism is a laughable argument.” Hmm… Well, why then did he come to the debate? To laugh?

We may, of course, also wonder… If Jesus mythicism is such a waste of time, then why has Ehrman spent so much time on it himself? Consider: he’s the most noted (the only?) American academic to have written a book on the topic. He in turn has been the subject of a mythicist book (Bart Ehrman and the Quest of the Historical Jesus of Nazareth, 2013). And now he is the first well-known American scholar to debate the mythicist case in public. Looking at his many efforts to combat mythicism to date, one suspects that Ehrman considers the issue to be a far more serious threat than he lets on.

It’s time to call his bluff.

Ehrman and his ilk are modern Brahmins, latter-day Pharisees. They already have their reward. Those familiar scribes prowl the halls of SBL conventions and hide the keys of knowledge in book-lined offices far from the jarring realities of the street. Yet what ultimately matters must take place in the street. And today, Jesus mythicists are there in increasing numbers—talking, blogging, debating, and forging the future.

Meanwhile, academics “have obtained the keys of knowledge, have hidden them and not gone in, and those who wished to go in they have not allowed.” Those words are from the rejected Gospel of Thomas. The same logion (39) fortunately also closes with the advice needed to overcome all entrenched opposition: “But you, be wise as serpents and innocent as doves.”