I hope you all witnessed the scene a few days ago as Joe Biden’s gavel descended on the Senate proceedings, bringing a desperate (and uncertain) element of closure to this bizarre 2016 election, and placing a metaphorical fig leaf of legitimacy over the incoming Trump administration’s privates—a shaky fig leaf put there by the Democrats, of all people. In fact, Joe’s gavel descended multiple times as four members of the House of Representatives, all Democrats, voiced their objections to the official tally of the Electoral College in a last gasp, one final attempt to reverse the official election tally that Congress had convened to certify.

One objector, Raul Grijalva (D-Ariz), claimed that ten of Florida’s electors were “not lawfully certified because they violated Florida code against dual office holders.” Whomp descended Biden’s gavel. “Debate is out of order!” the President of the Senate thundered with gaze averted. Machine-like, Biden then read: “Title III of the United States Code requires any objections to be presented in writing, signed by both a member of the House of Representatives and a Senator.” He looked up. “Is it signed by a Senator?”

Those three words broke the tension that had been dramatically mounting. Paul Ryan—sitting smugly behind Biden—began laughing. GOP senators started to applaud. Everyone in the chamber knew that Biden had basically gaveled the 2016 election into the history books. What they didn’t realize, however (especially those who laughed), was that Biden may have also gaveled American democracy into the history books.

A few minutes later, near the end of the electoral vote tally, another objector, Rep. Maxine Waters, D-Calif., unsuccessfully pleaded for any senator to support an election review. “Is there one United States senator who will join me in this letter of objection?” Waters asked pathetically, instantly drawing boos from the gathered Republican vultures.

Biden gaveled her down. He then similarly gaveled down protests from Reps. Barbara Lee, D-Calif., and Sheila Jackson Lee, D-Texas. The latter stood four times to protest, and each time Biden shut her down.

Haven’t we been here before?

For those of you who remember, the above scene was a replay of 2000, when Al Gore lost a similarly contested (as in: rigged) election and was himself presiding over the Senate. The consummate irony that Gore gaveled himself out of office suggests that, instead of fighting, the Democrats have developed the rather morbid habit of falling on their sword, harakiri-like. Either that, or hidden forces working against true democracy in this country have grown so strong that they have, since the turn of the millennium, reduced the Democrats (and the GOP?) to impotence. (Incidentally, the Al Gore scene is captured in Michael Moore’s movie Fahrenheit 911, about minute 5.) Only Barack Obama has been able to break the vise grip of those ‘hidden forces,’ which I have identified as deeply empowered monied interests.

We may all be mystified by these events coming at the most critical points in the democratic process. Consider: precisely when the People most require that our elected representatives stand up and cry “Foul!”—that is precisely when our government is eerily silent… Only one senator was required to object about this election, an election so fraught with anomalies. Only one senator was required to acknowledge the proven voter suppression in so many states, to affirm the now-documented counting irregularities, to confirm the undervotes in Detroit and elsewhere. These undemocratic anomalies are now all provable, particularly by the work of Jill Stein. The Green Party did not spend millions of dollars and four post-election weeks for nothing!

So, when these courageous ‘objectors’ came forward on Friday, where was Bernie? Where was Elizabeth Warren? Where was that supposed champion of minority rights Senator Cory Booker, for crying out loud? Where was my own senator, Oregon’s Jeff Merkley? Where indeed… Why were they not in the Senate chamber that day, shrilly raising their voice on behalf of justice, on behalf of democracy, and on behalf of the People whom they so generously laud at other times—but not at this time of desperate need?

Why indeed? There must be an important lesson in here somewhere, a lesson for us all… And that lesson begins with a one-word question: Why? I have repeatedly asked myself that question now for five days. The answers that have inexorably come forth, one by one, unfortunately lead to a conclusion that is far from pretty…

Let’s look at the events of election night, November 8–9. As we all know, the evening began with Clinton heavily favored. Then things steadily soured.

TIMELINE (All times are eastern) 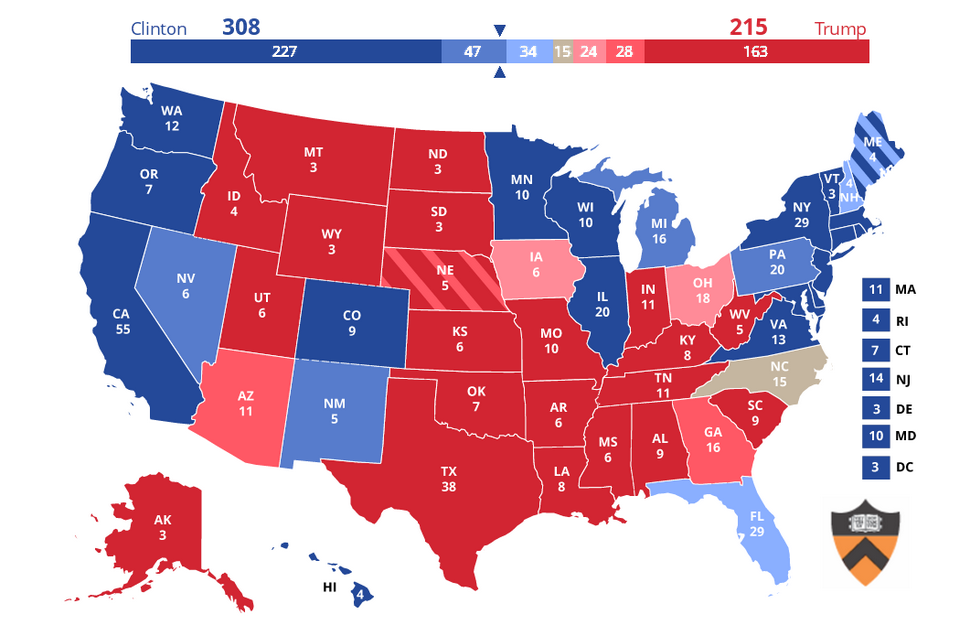 • 4:33 PM. Barack Obama makes a short (1’52”) video to the nation on Twitter (via BuzzFeed), endorsing calmness and unity (see below).
• 10:40 PM. Trump takes Ohio. The first blow for Clinton, but not unexpected.
• 10:53 PM. Trump takes Florida. The first real surprise. Not one of 11 professional predictions had given this important state to Trump.
• 11:14 PM. Trump wins North Carolina, though Clinton had looked strong in polling. Again, not one of the predictions had given Trump the lead. The Clinton camp now pins its fading hopes on claiming something from Pennsylvania, Michigan and Wisconsin.
• 11:56 PM. Trump clinches Utah, as expected.
• 00:06 AM. Trump takes Iowa, also as expected.
• 1:35 AM. Trump takes Pennsylvania. This was the real shocker. Every major poll had placed this “must win” state in Clinton’s column.
• 2:07 AM. The Clinton camp refuses to concede.
• About 2:15 AM? Barack Obama telephones Clinton and urges her to concede (see below).
• 2:30 AM. Trump wins Wisconsin’s 10 electoral votes, perhaps the most shocking result of the night, for Wisconsin had been regarded as more solidly for Clinton than even Pennsylvania. Winning this state put Trump officially over the 270 mark to win the presidency.
• 2:35 AM. Clinton calls Trump and concedes defeat.

The precise time of Obama’s phone call is uncertain. Clearly, it was before Clinton conceded at 2:35 AM. According to The Guardian (the source of the above timeline) the Democrats still were not willing to concede at 2:07. This locates Obama’s call roughly 2:00–2:30 AM. This agrees with The Hill, which tells us that the call came in while Clinton “and her top aides continued to watch results trickle in from the key Rust Belt states of Michigan, Wisconsin and Pennsylvania.” The same link tells us:

Obama’s call left a sour taste in the mouths of some Clinton allies who believe she should have waited longer, and there’s now a fight playing out between the Obama and Clinton camps over whether to support an effort to force the Rust Belt states to recount their votes.

Inside Clinton’s room at the Peninsula Hotel in Manhattan, where aides were on the phone with boiler rooms at the campaign headquarters in Brooklyn and the Clintons’ midtown office, there was still hope as election night stretched on. Their goal was to hold off as long as possible.

“There was a lot of discussion about Michigan and Wisconsin and whether the numbers could flip it,” said one of the sources, all of whom spoke on the condition of anonymity. This source said the final numbers were so close that Clinton might not have placed her call to Trump without a push.

“If anybody knew what actually happened that night, no one would have conceded,” the source said.

At the time, campaign Chairman John Podesta, a former Obama White House official, had been dispatched to Clinton’s victory party at the Jacob Javits Center to deliver an anodyne statement leaving the result of the election unaddressed.

Before he returned, Clinton put an end to the debate among her inner circle by asking to talk to Trump.

“Just give me the phone,” she said in frustration. “I’m calling him.”

According to the foregoing, the Clintonites were opposed to conceding. “Their goal was to hold off as long as possible.” But Obama’s call changed Hillary’s mind. What did he say to her? We don’t know, of course, except one important item that The Hill reveals. Obama told Clinton: “You need to concede.”

Game over. Henceforth, the Democrats have not contested this election in any way, shape, or form—not in the days, weeks, and months following that fateful night. The following day, President Obama pledged that he would not allow his ideological differences with the Republican business mogul to interfere with a “smooth transition so that [Trump] can hit the ground running” on January 20. Obama’s swiftness in closing ranks with the President-elect caught the media—and the country—by surprise. “The people have spoken,” he said.

Democrats have also been unified behind Barack Obama in ensuring a gracious transition of power to Trump. Indeed, they have vigorously opposed all strategies that would examine, investigate, or re-open the election. In Pennsylvania, the Governor and the Secretary of State (both Democrats) shut down the Green Party’s efforts for a recount. Obama’s Communications Director Dan Pfeiffer mocked that recount. Clinton herself was only politely “interested” in it after the Green Party raised enough money to actually go through with it. And—as we saw at the top of this post—not a single Democratic senator endorsed an objection to the final election results—despite proven hacking by Russia! To top it all off, it’s harakiri-time again, as Hillary plans to attend Donald Trump’s inauguration—while thousands of her own supporters will be protesting in the “Occupy Inauguration”! The situation is entirely mind-boggling. Unless, that is, Clinton knows something that we, the People, don’t know.

Barack Obama made a short, virtually forgotten video that aired on Twitter (via BuzzFeed) in the late afternoon of election day. Obama’s tone was calm enough. Reassuring. Even hopeful. Obama began by noting that this was a “sometimes downright weird” election—an allusion, no doubt, to Trump’s unorthodox campaign and to the Russian involvement that had already been in the news. “We’ve been through tough and divisive elections before,” Obama said, “and we’ve always come out stronger for it.” The President added—almost ominously, in hindsight—that democracy is “a beautiful and fragile gift.” And then he got to the heart of the message: “Most importantly [let’s all agree] to see each other not simply as Democrats or Republicans, but as fellow Americans, to treat each other with respect, and empathy, and with the kinship that title ‘American’ commands… We can choose to see the best in one another.” He closed, somewhat ominously again: “Remember, no matter what happens, the sun will rise in the morning, and America will still be the greatest nation on earth.”

It’s an innocuous video, the kind any president might make in the hours before the final results come in on a hard-fought election. Yes, “the sun will rise in the morning.” So, Obama clearly knew that a segment of the population was going to be disappointed. But it would be unjustified speculation to suppose that Obama knew something devastating to the Democratic hopes at the time he made that video, and even before the first states were called. He was just being the good coach for a divided nation, giving a little pep talk—wasn’t he?

Obama’s midnight phone call, however, was far less equivocal. It’s a smoking gun. Consider: Hillary’s camp was all for fighting on—until Barack telephoned. She certainly would not have conceded if he merely wanted her to. She would have required a good reason. A damn good reason.

The question is: What was the ‘nuclear bomb’ that Obama communicated to Clinton on Wednesday, November 9, 2016, about 2:00 AM? That is what we all need to know. For from that moment, everything suddenly changed. When Obama himself learned of that information is still uncertain. Did he discover it only about 2:00 AM, when his intelligence sources may have communicated to him something nefarious about the developing count from the field, counts that were surprisingly going against Clinton and against all expectations? Or did he know such disturbing information before, perhaps already when he made the BuzzFeed video in late afternoon? In either case, Obama communicated to Clinton certain devastating information very shortly before she conceded—information so decisive in its import, that Hillary gave up the contest then and there.