Though there are a few reviews of Gmirkin’s book it deserves a revisit today, over a decade after publication. Priced at $180, it’s unlikely that many of you have read this important tome. I did so only because the nearby University of Oregon Library possesses a copy. 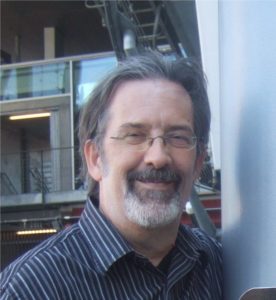 This is not a thoroughgoing review of Berossus and Genesis, Manetho and Exodus: Hellenistic Histories and the Date of the Pentateuch (New York: t & t Clark 2006), but rather a series of excerpts (see below) presenting its essential thesis and argument. For more details, see Neil Godfrey’s 2012 analyses (here, here, and here), and also Laura Knight Jadczyk’s fine customer review on Amazon.com.

At 332 pages, the book contains eleven chapters and six appendices. Gmirkin presents a novel (and revolutionary) analysis of the event we know as the birth of the Septuagint. He considers overlooked literary precursors and arrives at two astonishing conclusions (p. 3): (a) the Pentateuch was composed in 273–72 BCE in Alexandria; and (b) the Greek Septuagint was accomplished soon after, also in Alexandria, and probably by many of the same scholars. If Gmirkin is correct, of course, then the long-standing Documentary Hypothesis is dead in the water.[Cf. Comment 1 below.–RS] He writes: “The diverse Pentateuchal sources J, E, D, P, and H are best interpreted as illustrating the different social strata and interests among the scholars at work on the project” (p. 3). Gmirkin encapsulates his argument in the very first paragraph:

Following is a series of seminal passages from Gmirkin’s book:

[2] Chapter 4 shows that the Septuagint translation of the Pentatuch into Greek is the first true evidence for Pentateuchal writings in any language and yields a terminus ad quem of ca. 270 BCE. This is a conclusion of major importance, for it opens up the possibility that the Pentatuech borrows from or shows awareness of other literary texts written as late as ca. 270 BCE.

[2] A dependency of Genesis on Berossus or Manetho has never been seriously considered before, since it was assumed that the Pentateuch took shape by the time of Hecataeus of Abdera, that is, before Berossus and Manetho wrote. 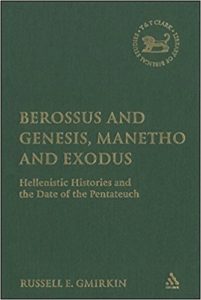 [3] Chapters 7 and 8 argue that the Exodus story was based on Manetho’s account of the expulsion of foreigners from Egypt into Judea… The Exodus story thus appears to have originated in reaction to Manetho’s Aegyptiaca written in ca. 285 BCE. Chapter 9 argues that the figure of Moses as a magician and deliverer of the Jews was modeled on Necanebos II, the last pharaoh of Egypt, as portrayed in legends of the late fourth and early third century BCE.

[17] The first extrabiblical reference to Chronicles and Ezra-Nehemiah date to 180 BCE or later, suggesting that these texts may be considerably later than conventionally dated.

[19] D. Redford showed that the Egyptological data of the Joseph and Exodus stories was consistent with the Saite, Persian and Ptolemaic periods… [25] No external evidence exists to establish an early date for either Kings or Ezra-Nehemiah. The first externally datable reference to material from Kings occurs in the book On the Kings of Judea by Demetrius the Chronographer (ca. 221–204 BCE)… Similarly, no external evidence exists that Ezra-Nehemiah was composed in the Persian period. The first external reference to Nehemiah occurs in the writings of Sirach (ca. 180 BCE); to Ezra even later.

[23] The Documentary Hypothesis made curious use of the reported events under Josiah and Ezra. The accounts in 2 Kgs 22–23 and Neh 6–8 were uncritically accepted as historically accurate: that a manuscript appeared under Josiah and resulted in extensive cultic reforms, and that another text was introduced under Ezra, was never questioned… [27] It thus appears that the Josiah reforms were of a literary, not historical character, and lack supporting evidence from archaeology.

[30] When the Elephantine papyri [from Upper Egypt, dating to V BCE] are scoured for evidence of the existence of the Pentateuch or any portion therof, the results are emphatically negative. There is no evidence that the priests at Yeb were of Aaronide descent. Indeed, there is no mention of Aaron or Levites in the papyri. Of over 160 Jews at Elephantine mentioned in the papyri, not one name comes from the Pentateuch. Nor is there any reference in the papyri to the Exodus or any other biblical event. Reference to laws of Moses or other authoritative writings is entirely absent. This is perplexing since the priests supervising the Jewish temple at Elephantine should have possessed and enforced the Jewish Torah, which, according to the Documentary Hypothesis, was complete and promulgated as authoritative during the time of Ezra and Nehemiah. A. Cowley commented..:

So far as we learn from these [Elephantine] texts Moses might never have existed, there might have been no bondage in Egypt, no exodus, no monarchy, no prophets. There is no mention of other tribes and no claim to any heritage in the land of Judah. Among the numerous names of colonists [at Elephantine], Abraham, Jacob, Joseph, Moses, Samuel, David, so common in later times, never occur… It is almost incredible, but it is true. [A. Cowley, Aramaic Papyri, xxiii.]

[31] …And yet the priests of Elephantine appealed to [Jerusalem] for assistance in restoring their own temple at Elephantine. That the Elephantine Jews made such an appeal seems highly inconsistent with the existence of an authoritative Pentateuchal tradition banning all altars or local sacrifices outside of Jerusalem.

The rest of Gmirkin’s book amply fleshes out the arguments above and shows, in general, how the Pentateuch resonates with the time of the Ptolemies in Egypt rather than with prior centuries. Gmirkin’s argument is strongest when he shows the lack of attestation for the Pentateuch before mid-III CE (the earliest attestation being the Septuagint itself) and the parallels with Berossus, Manetho, and others.

Did Herodotus influence the OT?

At least one point of contention exists regarding the possible role of Herodotus in the formation of Jewish scripture. Neils Lemche had argued “that the historiographical books of the Hebrew Bible were patterned after the structure of Herodotus.” Gmirkin contests this on the same page:

[11] The structural parallels Lemche attempted to show between Herodotus’s History and Genesis–Kings are forced and unconvincing. Further, one would expect that if the authors of the histories of the Hebrew Bible had been substantially influenced by Herodotus, quotations or ideas from Herodotus would be found somewhere in Jewish historiographical writings, but direct borrowing from Herodotus has never been detected. No real evidence exists that the Jewish authors of the Pentateuch or the Deuteronomist knew Herodotus.

Unfortunately Gmirkin does not offer a reference for the foregoing, so it is not clear what passage in Lemche’s writing he is critiquing. (See Lemche, Prelude to Israel’s Past, 1998:14 for a more moderate view.) In any case, Gmirkin does not address a relevant (and also very expensive) book by J. Wesselius: The Origin of the History of Israel: Herodotus’ Histories as Blueprint for the First Books of the Bible, 2002). Wesselius’ work does not appear in Gmirkin’s bibliography. While putative influence of Herodotus on the OT is admittedly not Gmirkin’s focus, if true it would substantially broaden our view of the Septuagint scholars’ work. And both positions are compatible: the OT could have been influenced by Herodotus on the one hand and by Berossus/Manetho on the other.

Gmirkin does indeed find influences from Plato on the OT—he has recently penned an entire monograph on this: Plato and the Creation of the Hebrew Bible (extensively reviewed by Neil Godfrey).

I deal with Wesselius’ book in another review.—R.S.