• the New Testament must be dated to the second century CE
• Epiphanius identifies the pre-Christian Jessaeans with Philo’s Therapeutae, and the Therapeutae with early Christians
• According to Epiphanius, some Jewish pre-Christians “set themselves ablaze”
• Epiphanius shows that the Nazoraeans were in some way related to Indian monks

In these posts we are immersed in developments during the first century CE. This is a different world. Apparently there are “venerators of Joshua/Jesus” (a Semitic name roughly meaning “Y[ahweh] is Salvation,” BDB 221)—as Dr. Detering will claim later in his article. However, there were not yet “Christians” in the accepted sense of that word (see below). Both Detering and myself agree that in I CE there was no knowledge yet of Jesus of Nazareth (on this, see here and here).

If one accepts that Jesus of Nazareth was invented in the first half of II CE, then one wonders: who is meant by the use of “Christ/Messiah” before that time? We know, of course, that “Christ” is used literally hundreds of times in the Pauline epistles—that they certainly predate the gospels, as scholars universally agree. Therefore, without Jesus of Nazareth, to whom does the “Christ” of the epistles refer? Later on in this series (see here) I will suggest a rather surprising candidate.

And here we come to the redefinition of terms that must eventually challenge those who investigate Christian origins. “Jesus,” too, must be redefined. For, without the god-man from Nazareth, the suspicion grows that Jesus was a spiritual entity—“the Jesus,” and that it was no man at all—precisely as the ancient docetists claimed.

The word “Christ” (from which “Christian”) transliterates the Greek Xristos, which literally means “anointed one.” This, in turn, translates the Hebrew Meshiach (“Messiah”)—again, “anointed one.” Now, the Hebrew term is old, predating Christianity. It could refer to a human being (a king, a prophet, an exemplary figure) or, uniquely, to the eschatological Davidic messiah, who will come as judge at the end of time. One could also be anointed with oil for fairly banal occasions—the more casual usage of the term.

While Meshiach was already an old term at the turn of the era, the Greek Xristos was entirely new. It is specifically ‘Christian’ and comes encumbered with doctrinal baggage that is emphatically non-Jewish: the Christian “Christ” was God made man. The difference between Meshiach and Xristos encapsulates the fundamental difference between Judaism and Christianity: the former maintains strict separation between God and man, but the latter breaks down that barrier.

We also note, from this brief investigation of terms, that Christianity emerged as it left the Jewish sphere. It is no coincidence that the New Testament is in Greek—yet the vast majority of protagonists and venues are Israelite. In a fundamental sense, Jesus of Nazareth is a Hellenistic figure who moves among Jewish props. He is a divine man (theios anér) in an essentially foreign scene—Palestine. The evangelists use Jewish institutions, venues, and ideosyncrasies (as much as they know them in II CE) as accoutrements. The essential is the kerygma: the “proclamation” of the Son of God born of a virgin, who redeemed us through his death on the cross, and who arose from the grave to sit eternally at the right hand of God. That proclamation is entirely non-Jewish and very Greek. It is the heart of the euaggelion, the “good news”—another Greek term.

Acts 11:26 informs us that the disciples were first called “Christians” at Antioch. That renaming is conventionally dated to the middle of the first century CE. But a ‘mythicist chronology’ moves everything later—the invention of Jesus of Nazareth (early–mid II CE), the canonical gospels (probably 140–50 CE, in quick succession), and also the first use of the term “Christians” (early II CE?). The traditionalist will object that there exist several non-Christian textual witnesses to “Christ” and “Christian” stemming from the first and early second centuries CE. But Detering has written an entire book (Falsche Zeugen, 2011) examining the six ancient authors at issue, and he has shown all the pertinent passages to be bogus—later interpolations into the works of Josephus, Tacitus, Suetonius, etc. The upshot is that the term “Christian” probably arose about the same time as the Greek Xristos, and about the same time as the penning of the canonical gospels: early II CE.

‘Paul’ also is no obstacle to the mythicist chronology. His letters mention “Christ,” and “Jesus Christ” repeatedly. But “Paul” (his existence is also in doubt!) must likewise move to the second century: the mythicist consensus (Price, Detering, myself, some others) is that the Pauline epistles were first penned by Marcion’s school (cf. the Apostolikon), then ‘adapted’ by the Catholic Church. In summary, then, basically the entire New Testament must be dated to the second century CE. Surprisingly, the Revelation of John may be the earliest New Testament writing!

[For more on the new chronology, see → here.]

Like Acts, Epiphanius reports in the critical chapter 29 of his Panarion, “Against Nazoraeans,” that the first Jesus followers were not called “Christians.” But he furnishes more details. Epiphanius writes: “At that time all Christians were called Nazoraeans… They also came to be called ‘Jessaeans’ for a short while, before the disciples began to be called Christians at Antioch” (Pan. 29.1.2). If we delete “at Antioch” and replace that with “c. 125 CE” we are closer to the truth. With that later date in mind, we see that Epiphanius reports two names for pre-Christian believers: Nazoraeans and Jessaeans. The former, of course, suggests the evangelist Mark’s favorite moniker for Jesus: “the Nazarene” (usually mistranslated “of Nazareth” in our Bibles). The latter name, “Jessaean,” suggests the Essaioi (Essenes). And now we come to something very interesting—Epiphanius identifies these pre-Christian Jessaeans with Philo’s Therapeutae, and the Therapeutae with early Christians:

If you enjoy study and have read about them in Philo’s historical writings, in his book [sic] entitled “Jessaeans,” you may discover that, in his account of their way of life and hymns, and his description of their monasteries in the vicinity of the Marean marsh, Philo described none other than Christians… But Philo wrote all this of the faith and regimen of the Christians. (Pan. 29.5.1.)

All this is most revealing, and we will consider Detering’s lengthy examination of the Therapeutae in subsequent posts. (The highly provocative Essene angle, however—with possible links to early Christianity—must be left for another time.) If the foregoing were not surprising enough, Epiphanius then writes something absolutely astounding about these Nazoraeans—something that has been uniformly and assiduously ignored by scholarship: these Jewish pre-Christians “set themselves ablaze”! The passage from Epiphanius reads: 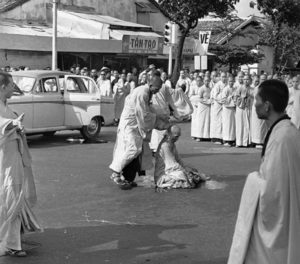 I mean the Nazoraeans, whom I am presenting here. They were Jewish, were attached to the Law, and had circumcision. But it was as though people had seen fire under a misapprehension. Not understanding why, or for {what} use, the ones who had kindled this fire were doing it—either to cook their rations with the fire, or burn some dead trees and brush, which are ordinarily destroyed by fire—they kindled fire too, in imitation, and set themselves ablaze. (Pan. 29.5.4–5, Williams translation.)

It is a very strange passage. Epiphanius obviously does not understand why some Nazoraeans “set themselves ablaze.” (One cannot really blame him!) In his desperate search for an explanation, he lamely supposes that they did so unintentionally—they simply did not know the proper use of fire (as if he were speaking of three-year old children). And let us be clear: Epiphanius is certainly not writing allegorically, nor is he using the term “fire” symbolically. He writes “cook their rations” and “burn some dead trees and brush.” This shows that he is treating “fire” as the combustible, destructive, sensible force we all know. In that very real context, he then writes about Nazoraeans setting themselves ablaze!

Epiphanius’ passage immediately brings to mind a famous incident of the Indian monk who set himself on fire in the Athenian agora c. 20 BCE. Strabo (d. 24 CE) writes about the self-immolator in two places. In one, he identifies his name, “Zarmanochegas” (Geographia xv.1.73). From Strabo we also learn that Zarmanochegas was a gymnosophist. Gymnosophist” means “naked sage” in Greek, and the term referred specifically to ascetics from India.

In the other passage, Strabo writes: “From one place in India, and from one king, namely, Pandion, or, according to others, Porus, presents and embassies were sent to Augustus Caesar. With the ambassadors came the Indian gymnosophist, who committed himself to the flames at Athens, like Calanus, who exhibited the same spectacle in the presence of Alexander” (Geographia xv.i.4). Calanus was another famous gymnosophist, one of Alexander the Great’s many teachers who, while yet in Alexander’s retinue, immolated himself at Susa in 323 BCE.

Porphyry (late III CE) divided the gymnosophists into two groups: Brahmins (Vedic priests) and Samanaioi. The latter term signals Buddhist monks. In Pâli (the language of the earliest Buddhist texts), the masculine singular is Samano. To my ear, this is suspiciously similar to “Zarmano.”

In any case, when we connect the dots (as we will do periodically), the conclusion is inescapable: Epiphanius is clearly indicating (unintentionally, of course) that the ‘pre-Christian’ Nazoraeans were in some way related to Indian monks!

As if industriously digging his own grave, Epiphanius dilates further:

But besides, as I indicated, everyone called the Christians Nazoraeans, as they say in accusing the apostle Paul, “We have found this man a pestilent fellow and a perverter of the people, a ring-leader of the sect of the Nazoraeans” [Acts 24:5]. And the holy apostle did not disclaim the name—not to profess the Nazoraean sect, but he was glad to own the name his adversaries’ malice had applied to him for Christ’s sake. For he says in court, “They neither found me in the temple disputing with any man, neither raising up the people, nor have I done any of these things whereof they accuse me. But this I confess to you, that after the way which they call heresy, so worship I, believing all things in the Law and the prophets” [Acts 24:12–14].
And no wonder the apostle admitted to being a Nazoraean! In those days everyone called Christians this because of the city of Nazareth—there was no other usage of the name then. People thus gave the name of {“Nazoraeans”} to believers in Christ, of whom it is written, “He shall be called a Nazoraean” [Mt 2:23; Pan 29.6.2–5].

Here, then, Epiphanius derives the term “Nazoraean” from the settlement of Nazareth. (Ahem.) Putting aside the issue of Nazareth’s non-existence at the turn of the era, however, other than Epiphanius we have no record of residents of that august settlement setting themselves ablaze! Which is to say: Epiphanius has not furnished posterity with the best explanation for the derivation of “Nazoraean.” For that, we will have to look elsewhere.

Epiphanius soon returns to his original point: the early Christians had association neither with “Nazareth” nor “Nazoraean.” They were purely followers of Jesus: “Thus Christ’s holy disciples called themselves ‘disciples of Jesus’ then, as indeed they were. But they were not rude when others called them Nazoraeans…” (Pan. 29.6.7). This tells us that “Nazoraean” was a heretical appellation, one attached to the “holy disciples” by others and merely tolerated. Eventually it stuck because “our Lord Jesus was called ‘the Nazoraean’ himself ” (Pan. 29.6.7). It does not incommode Epiphanius in the least that “our Lord Jesus” was known by a heretical name! In any case, we note once again that the earliest Christians were not disciples of Jesus “of Nazareth,” of Jesus “the Nazarene,” or even of Jesus “the Nazoraean.” They were simply disciples of Jesus.

The question now arises: What did “Jesus” mean to those pre-Antiochene Christians? We will venture an answer in subsequent posts, for Dr. Detering will address this important question in his article.