[Dr. Detering writes, p.3:] We encounter another allegorical interpretation of the Exodus motif with Simon Magus, as reported by the church father Hippolytus… The passage gives an analogy between the World Tree and the umbilical cord of the growing fetus in the womb. In Simon’s allegorical thought, the Book of Exodus is symbolic:

[Hippolytus writes:] Again, the inscription of the second book is Exodus. Now, they say [Simon Magus] calls the Red Sea blood—and who has been produced, passing through the Red Sea, must then come into the wilderness and taste bitter water. For bitter, he says, is the water which is drunk after crossing the Red Sea; which water is a path to be trodden that leads us to a knowledge in this life of our toilsome and bitter lot. However, Moses—that is, the Logos—altered that bitter water and made it sweet… (Ref. 6.10, emphasis added and edited by R. Salm for syntax and clarity.) 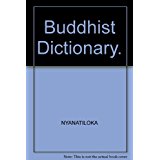 [Salm:] Simon Magus allegorized the crossing of the Red Sea as passage through the umbilical cord—as birth into “this life of our toilsome and bitter lot.” This view strikingly resonates with Indian religion. In Buddhism, dukkha (sorrow) is one of the three basic characteristics of existence (ti-lakkhana). Dukkha is also the first of the so-called Four Noble Truths—the very backbone of Buddhism. Dukkha “refers to the unsatisfactory nature and the general insecurity of all conditioned phenomena which, on account of their impermanence, are all liable to suffering…” (Nyanatiloka, Buddhist Dictionary). In short, Simon Magus taught the Buddhist view that entry into life is entry into inevitable suffering.

[Detering:] Like Philo’s Therapeutae, the author of The Great Revelation [i.e. Simon Magus] saw the passage through the Red Sea as a metaphor for purification [Läuterung]. Egypt and the Red Sea are symbols of the body, which (on the way to the immaterial spheres) must be traversed. However, the Logos—that is, Moses—makes the way manageable.

[Salm:] We note that the Red Sea, in Simon’s unique view, is not a body of water at all—it is blood. The water is found after passage through the blood, that is, after human birth. The water is bitter until it is ‘sweetened’ by Moses. Now, this view extolling Moses strongly recalls Samaritanism, where Moses is the “only Prophet, Savior, and Celestial King.”[1] The Samaritans also consider Moses as “the Light of the World” (whose light, incidentally, would be transmitted by the Levites).[2] This is an unmistakably gnostic view, and it coheres well with Moses’ action upon water—namely, that he “altered that bitter water and made it sweet” (Ex 15:25). 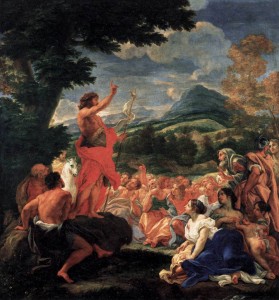 The Preaching of John the Baptist
by Baciccio

When understood as symbolic of ‘gnosis,’ water is the unexpected link connecting many dots relevant to Christian beginnings. We learn, for example, that Simon Magus was “the first and most distinguished disciple” of John the Baptist (Cl.Hom. II.23). According to the same text, Dositheus followed Simon. Most interestingly, we learn that “John and Dositheus were equivalent names.”[3] This is true: Jonathan in Hebrew means “Yah[weh] Gives,” while Dositheus in Greek means “Gift of God”! We also know that the Dositheans were a baptizing movement among the Samaritans. Indeed, “it was said that the Dositheans performed all their prayers in water.” (Purvis, “Fourth Gospel” p. 192; cf. also Jesus ‘Standing in the water’ in the final illustration at the bottom of this post.) Saying one’s prayers in water is, of course, utterly absurd unless understood allegorically. We encounter the same concept in the first century CE Life of Adam and Eve:

And Eve said to Adam, “My lord, tell me what is repentance and what kind of penitence should I do”… And Adam said to Eve… “Stand in the water of the [Tigris] river for thirty-seven days. But I will spend forty days in the water of the Jordan. Perhaps the LORD God will pity us.” (Vita Adae et Evae 5–6)

It should now be increasingly clear to the reader of these posts that ‘water’ symbolized gnosis in many ancient religious texts—including orthodox and heterodox Christian writings. Only by recognizing this important symbolism is it possible to understand the phenomenon of baptism—which is central to Christian origins. The frequent (and sometimes strange) focus on water—dipping into water, standing in water, crossing over water—is not about water at all. It is about self-transformation through gnosis. If the reader understands this critical teaching, s/he has taken a great step towards understanding Christian origins.

If ‘sweet water’ (above) is gnosis, then (by analogy) ‘bitter water’ is its contrary: ignorance. In Buddhism, ignorance is the great enemy of mankind—avijja. All this shows that a hardly-suspected syncretism exists between Buddhism, Gnosticism, and even Judaism. We must broaden our point of view, must take several steps back so that our focus is not merely Christianity but is man himself, is not merely the Levant but stretches from Egypt to India. Anything less will not furnish us the understanding we need—an understanding not of one or another religion (Zoroastrianism, Hinduism, Buddhism, Judaism, Christianity) but of the gnosticism that produced these religions out of man’s basic yearning to understand his condition.

Elements supporting the colossal syncretism of which I speak are just below the surface, as it were, and they are almost always passed over in silence. This has occurred because those vital elements do not fit any local lore. They do not support any local ‘one-upsmanship’—which seems to be what everyone is so interested in. Hence, every local lore (‘religion’) is imperfect and ignores anomalous elements that don’t fit in, elements pushed out to the fringe.

For example, at least one scholar has claimed that “Moses” means “Water Saves.”[4] That datum is completely anomalous. It does not fit Judaism, nor even what scholars consider to be Gnosticism. Its relevance depends on the obscure equivalence water = gnosis that I’ve presented in these pages. And yet, the datum “Moses” means “Water Saves” could be enormously enlightening in understanding Jewish origins as a proto-gnosticism, argued here.

A similar case exists with the above citation regarding Adam and Eve standing in water for long periods. How very, very strange! It fits into no ‘normative’ religion. And yet, I maintain that such passages are vital to uncovering the root of Christianity, and perhaps even of other religions. In any case, when Christianity organized it repudiated it’s gnostic origin. Nevertheless, signs of that origin remain visible at the margins of the religion—in the apocrypha, and in lesser known elements (e.g. the fish symbol) whose gnostic meaning has long since been lost.

Employing the wider perspective gained by taking the several steps back mentioned above, it is now possible to theorize that Simon Magus received a core element of his theology from Buddhism, and that he then transmitted it to Samaritanism: passage into life (birth) is also passage into suffering and ignorance (‘bitter water’). Simon married this essentially Buddhist view with his Jewish heritage, and the result was Dositheanism—otherwise known as Samaritan gnosticism. Specifically, Simon taught (according to Hippolytus) that Moses brought an end to ignorance (‘bitter water’) by bringing gnosis (‘sweet water’). Now, Simon Magus is commonly considered the ‘founder’ of Gnosticism. In his view, then, Moses was none other than a gnostic savior.

[For Buddhist background on early Christianity see here (historical connections), here (religious parallels),
and click on the category “Buddhism” at the top of this post.—RS]

It is clear from the above that Simon Magus, the Therapeutae, and other gnostic groups viewed the Exodus not as an historical event in the remote past, but as the model of an inner, spiritual transformation in the present. Gnostics “interpreted” the Exodus event allegorically and applied that interpretation to the individual’s own spiritual journey.

Philo tells us that the Therapeutae specialized in allegorical interpretation (Vita 29). Indeed, Philo was himself an allegorist. This furnishes us a key to the frequent accusation against Christian gnostics and sectarians—that they “mutilated” or “changed” Jewish scripture. That accusation was hurled against the Ebionites, the Dositheans, the Samaritans, and others. But these sects primarily interpreted Jewish scripture allegorically. In so doing they would have denied (or at least challenged) the history of the Patriarchal Age and the very foundations of Judaism. In interpreting the New Testament allegorically, heterodox Christians would similarly deny the historical validity of the canonical gospels. All this is very dangerous territory, and it is no wonder that gnostics have been vilified wherever they have existed.

As an aside, we might consider which came first: the literary account of the Exodus, or the universal experience of spiritual transformation, of ‘crossing over.’ My own view is that gnosis is primordial, integral to being human, and as old as our species. The Exodus event, as described in the Old Testament, may be a reification of something once spiritual and universal, now particularized by the Jewish priests and ‘owned’ by them—even as the priests owned Yahweh. After all, for Jews to be exclusively Yahweh’s ‘chosen people,’ then Yahweh must in turn be exclusively the God of Jews. 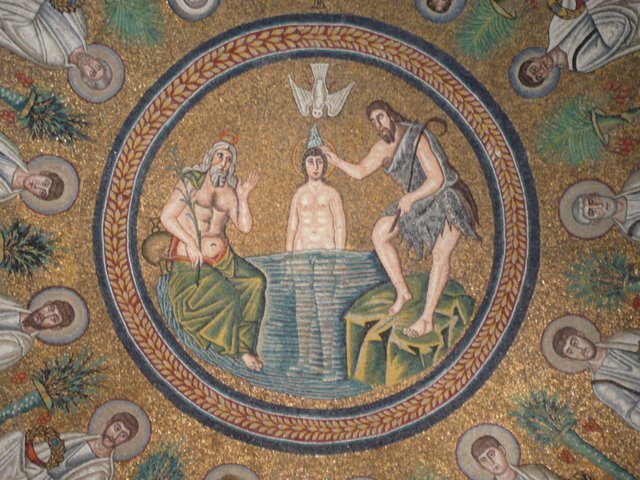 Standing in the water, Jesus is baptized by John and receives the spirit “like a dove” (Mk 1:10)

Of course, salvation cannot be owned or ‘exclusivized.’ Yet, when we look at religions since the dawn of civilization, it seems as if the first preoccupation of every priesthood is precisely the ownership of salvation: “We have the way. Nobody else does.” Each priesthood claims the true message, and each imputes the lie to everyone else!

To the gnostic, however, the truth belongs to all and is directly accessible by any individual—without an intermediary. In gnosticism, salvation lies quite unseen within the heart and mind of each human being. The essential is a mysterious inner transformation—one brought about by self-acquired gnosis. Indeed, this very message seems to lie half-hidden behind many logia and parables in the Christian gospels. But the gnostic way immediately renders every priesthood superfluous, and that may be why Christianity early on repudiated the way of gnosis as its mortal enemy. Apparently, the changeover from a religion of gnosis to a religion of faith occurred simultaneously with the organization of the Church in the first half of the second century CE—along with the invention of Jesus of Nazareth.

I now bring to the reader’s attention that, thus far in the nine posts in this series, we have discussed the two most vital symbols in gnosticism—the moon, and water. The former shines in the darkness, the latter is gnosis itself. That so many early Christian texts and traditions center upon immersion in water (‘baptism’) is a clue that the texts are not to be taken literally (e.g. the Adam and Eve citation above), nor are they fundamentally about immersion in water at all. They are about immersion in gnosis.

With that we have the key to the origins of Christian ‘baptism.’