[Dr. Detering writes, p.3:] Further interpretations of the Exodus motif are found with the Peratae and the Naassenes. The two Gnostic sects—together with the Sethians—make up the so-called Ophites, described by Hippolytus in the fifth book of his Refutations. The name derives from the Greek word for serpent, ophis, based on the fact that the serpent plays a central role in the mythology of all three sects… [4] For them, the serpent in the Garden of Eden brought gnosis. It was also a symbol of healing and salvation.

…The Peratae identified the serpent with the Logos, whose domain is situated between the unmoved Father and Matter in motion. Thus the Logos is the middle term. On the one hand it turns towards the Father, whose powers it receives and passes on to the material realm. On the other hand, the Logos liberates the Father’s powers from the material chains below and leads them back to the Father. Thus, at this “top of his head” are “setting and rising mingled one with the other.”

For the Peratae, the creation is the realm of nothingness and transience. Because all is subject to these characteristics, for the Peratae there is only one way to salvation: man must negotiate his demise—which he cannot avoid—even before physical death. 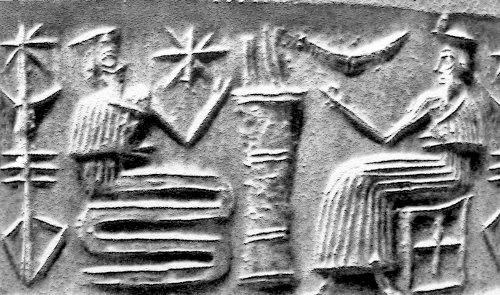 The Mesopotamian god Enki as half-man half-serpent is at left. The waxing crescent moon (center right) was also an ancient symbol of gnosis, representing the conquest of light over darkness.

In early civilizations, the serpent was venerated as wise—and also wily. Enki, the clever Mesopotamian god of wisdom, was usually depicted seated upon a (coiled) serpent throne. Alternatively, he was half-man, half-serpent. Given that water (in addition to the serpent) was also a symbol of gnosis, it is no surprise that Enki’s mythical home was the underworld ocean, known as the Abzu.

Thus, early civilizations in the Levant knew both symbols for gnosis: the serpent, and water. Accordingly, we find the enlightened gnostic messenger from the transcendent/divine realm sometimes depicted as a serpent-man, and sometimes as a fish-man. We famously encounter the latter in Oannes, described by Berossus (III BCE) as the half-man/half-fish who rose from the sea to teach early people the arts of civilization. (Incidentally, considerable resonance exists between this ancient gnostic figure and ‘John’ the Baptist of later Christian lore.)

The wise serpent was also known in early India:

You [gods] who were born from waters… listen to my call… Looking on men, never slumbering… Borne on refulgent chariots, sinless, with serpents’ powers…” [Rigveda 10.63:2-4].

Here, “serpents’ powers” are an attribute of divinity. One commentator, H. H. Wilson, glosses “serpents’ powers” with the words “unsurpassable wisdom,” in which case the passage assumes a definite gnostic cast. Note the first phrase: the gods are born from waters. In the previous (and other posts) we have seen how water was a cipher for gnosis in Western gnostic texts. This view was known in India, and it supports Wilson’s gloss “unsurpassable wisdom.” With the apposite substitutions, the foregoing citation reads:

You [gods] who were born from gnosis… listen to my call… Looking on men, never slumbering… Borne on refulgent chariots, sinless, with unsurpassable wisdom…” [RV 10.63:2-4, edited].

Indian influence is also discernible in an astonishing passage of Hippolytus, where the Church Father reports that the Peratae believed the creator was a great serpent: 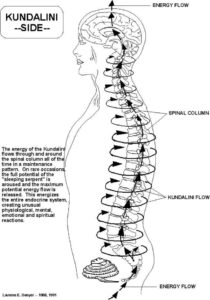 And if the eyes of any, he says, are blessed, this one, looking upward on the firmament, will behold at the mighty summit of heaven the beauteous image of the serpent, turning itself, and becoming an originating principle of every (species of) motion to all things that are being produced. He will (thereby) know that without (the serpent) nothing consists, either of things in heaven, or things on earth, or things under the earth. Not night, not moon, not fruits, not generation, not wealth, not sustenance, not anything at all of existent things, is without his guidance. In regard of this, (the Peratic) says, is the great wonder which is beheld in the firmament by those who are able to observe it. For, he says, at this top of (the Peratic’s) head, a fact which is more incredible than all things to those who are ignorant, “are setting and rising mingled one with the other.” This it is in regard of which ignorance is in the habit of affirming: in heaven “Draco revolves, marvel mighty of monster dread.” (Ref. 5:11)

This is very evocative of Indian themes. In Kundalini—whose origins are Upanishadic and centuries before the turn of the era—the serpent energy (prana) rises to the crown chakra at the top of the head, where the vital force “is spread over both the macrocosm, the entire Universe, and the microcosm, the human body” (Gopi Krishna). The macrocosm is above, and the microcosm below. Therefore the crown chakra is in the middle position, witnessing energy flowing upwards and downwards. This conforms remarkably with the Peratic view that “at the top of (the Peratic’s) head… are setting and rising mingled one with the other.”

Buddhism, emptiness, and transience. Buddhism teaches three enduring characteristics of existence (ti-lakkhana): transience, emptiness, and dissatisfaction. Each of these characteristics has received volumes of commentary over the centuries, and I won’t enter into detail here. Suffice it to note that the second characteristic, emptiness (suññatâ) is associated with (and sometimes synonymous with) the doctrine of non-soul or not-self (anattâ)—the single element that made Buddhism largely unacceptable and a ‘heterodoxy’ in South Asia.

For the Peratae, as Dr. Detering remarks above, “the creation is the realm of nothingness and transience.” This is quintessentially Buddhist—nothingness (“emptiness”) and transience are two elements of the ti-lakkhana. The former leads to the doctrine of non-soul and to the rejection of any notion of a future life. (We must, surprisingly, put aside the belief in reincarnation/rebirth later imported into Buddhism from Hinduism.) This, in turn, leads to the concept of realized eschatology: the goal in primitive Buddhism is to find salvation while yet in the flesh (“as if your hair is on fire,” said the Buddha). This requires no afterlife and no heaven or hell: ‘crossing over’ happens in the here and now:

If they go beyond all this, leave it behind,
The Buddha’s followers with mind aware
Pass beyond the range of the devil’s might. (Sam. Nik. 1.4.17)

In Buddhism, crossing over—i.e., leaving “all this” behind—must take place before physical death, or it will not take place at all:

Once again, this reminds us of the Peratae. As Dr. Detering states: “[F]or the Peratae there is only one way to salvation: man must negotiate his demise—which he cannot avoid—even before physical death.” This is realized eschatology—and it is an original Buddhist tenet.