In the Clementine writings, the adversary Simon is nothing less than a (false) Christ figure. This is clear from the way Peter speaks of him: “For who would not marvel at the wonders done by him [Simon Magus], so as to think of him as a god come down from the heavens for the salvation of human beings?” (Rec. 2.6; Gebhardt p. 49; emphases added.) Epiphanius knows the same claim: “He [Simon] therefore came forward, and under the name of Christ…” (Pan. 21.2.1). 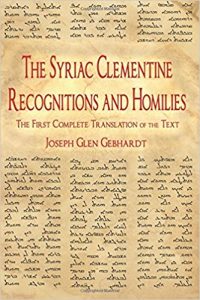 This must cause wonder. For over fifteen hundred years the West has been inured to only one Christ figure: Jesus of Nazareth. However, when one investigates the many ‘heretics’ and the plethora of texts that did not make it into the canon, other Christ figures emerge—and each will surprise most modern readers. They include Paul, Simon Magus, and Joseph of Arimathea—to name but a few.

From the above Pseudo-Clementine citation, it is clear that as late as c. 200 CE (when those texts were written) some ‘Christian’ heretics still existed who revered Simon Magus as the Messiah/Christ. More than that: they constituted such a formidable presence that combating them was the primary focus of the Pseudo-Clementines. The Simonians were not few, but many.

And now for an important correction: I deem it probable that the figure ‘Simon Magus’—as portrayed in the surviving Christian literature—did not actually exist as a human being. And here we must move carefully: what no doubt existed (and what the Clementine author really combats) are the gnostic doctrines that ‘Simon Magus’ represents. In my view ‘Simon Magus’ is a cipher. He is a convenient strawman invented by the tradition for a specific polemical purpose: in order to ridicule and debunk dangerous and once quite popular doctrines. From the hostile account of the Pseudo-Clementine writings, we learn some of those doctrines espoused by the ‘Magus’: belief in a hidden, potent, and invisible God that is superior to the creator God; the emptiness of materiality; denial of the soul’s immortality; and denial of the bodily resurrection.

Christian texts are replete with such convenient strawmen. Many figures are fairly obvious ciphers—they represent doctrines or sects, such as ‘Ebion,’ founder of the Ebionites (Epiphanius). Ebion means ‘poor.’ It immediately recalls the poor around James the Just (cf. Gal. 2:10). Elxai (the alleged teacher of Mani) is another such name. It derives from El-chasai / El-kasia, which simply means ‘the hidden God.’ Such characters are a convenient literary shorthand. They probably never existed. However, the doctrines that they (were made to) ‘personify’ very much existed.

The solution to this riddle is that the Church Fathers attacked the same views repeatedly, in different ways, using different names. Marcion also believed in the ‘hidden, potent, and invisible God that is superior to the creator God.’ Thus, we can include him along with Simon Magus and Elxai as a potential ‘equivalent’ cipher. 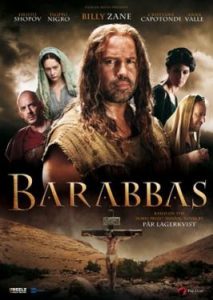 In sum, radical skepticism is the only correct attitude when approaching early Christian writings. Biographical details may be literary creations, persons may be ciphers, and no historical basis may exist for characters at all. This certainly occurs even in the New Testament—for example with the notorious criminal Barabbas. The name means ‘Son of the Father’ in Aramaic, and Jesus dies in order that Barabbas may live. It is a nice literary touch, presumably teaching the reader that Jesus died even for the worst among us. However, the scene makes absolutely no historical sense. According to the gospel accounts, Barabbas was a murderer, bandit, and insurrectionist (Mk 15:7 & pars)—the last sort of person the Romans would have freed! That they would have released him at the instigation of the populace is contrary to everything we know about the Romans (and about Pilate in particular). The custom (Mk 15:6) of freeing a prisoner at Passover by popular demand is documented nowhere but in the gospels. Finally, the act of publicly bartering one criminal for another is not only un-Roman, but it is also a strange way to administer justice, to say the least!

However, the scene makes sense as allegory and perfectly expresses Christian doctrine: the guilty Barabbas/Son of the Father stands for us all, and the innocent Jesus indeed gave his life for all of (guilty) mankind.

Incidentally, the Pseudo-Clementines add an astonishing twist to the Barabbas narrative. We read: “And after him Barabbas, the one who became an apostle in the place of Judas the betrayer… was counseling the people to neither hate nor despise Jesus: ‘Wherefore it is best for someone who has not recognized Jesus as the Messiah not to hate him, for God has determined a reward for love but not for hate'” (Rec. 1.60; Gebhardt 38; emphasis added). So, here we apparently have a tradition whereby the hardened criminal Barabbas not only becomes a Christian, but becomes the twelfth apostle in the place of Judas! In the tradition that place is taken by Matthias (Acts 1:26). However, consider Acts 1:23–“So they proposed two [candidates to fill the place of Judas]: Joseph called Barsabbas, who was also known as Justus, and Matthias.” Barsabbas and Barabbas are variants of the same name, while a few manuscripts read Barnabas… Make of this little anecdote what you will.

As a literary invention functioning allegorically, Barabbas is what I call a ‘cipher.’ A similar mechanism almost certainly underlies other names that are familiar to us from early Christian literature, perhaps including Simon Magus (Shimeon ‘the Magician’), Simon Cephas/Peter (Shimeon ‘the Rock’), John ‘the Immerser,’ and even Jesus (‘Savior’)—the ultimate cipher. It is not a question of whether any characters in the New Testament are ciphers, but if any are not! The evangelists manipulate their figures much like puppeteers at a carnival show, pulling the strings this way and that, introducing them when desired and dismissing them at will. And like a puppet show, any historical basis that might underlie a scene or a character is secondary to the purposes of the author and to his doctrinal goal in each pericope.

Dositheus, Peter, John the Baptist, and even Jesus (along with Simon Magus) may all be literary creations in the context of fictional accounts. The early Christian gospels and acts (both canonical and apocryphal) are thoroughgoing fiction masquerading as history. As such, they are deceptive from alpha to omega.

The characters that populate the gospels, acts, and early Christian lore are like puppets that do and say whatever those pulling their strings wish. As in a puppet show, the New Testament characters are also larger than life. They are caricatures, exaggerations, and the narrative story lines are correspondingly simple, intentionally streamlined in order to help the uni-dimensional characters and scenes convey uncomplicated, universal messages.

Both the puppet show and the Christian gospels/acts entertain. The main difference, however, is that the latter have a unique and overriding purpose: to transmit doctrine. That religious purpose is by-and-large hidden, masked under layers of pseudo-history. In short, the historical claims of the Christian texts—together with the reader’s acceptance of those claims—allow the Church to achieve its doctrinal purpose, that is, to propagate its message.

The nascent Church seems to have early discovered the usefulness of the foregoing method, one borrowed from the stage, poetry, and age-old religious mythology. The difference is that Christianity now had new doctrines to convey. Those doctrines required new contexts, and also new characters—‘ciphers’ as I call them. Despite this, mimesis criticism is showing that the evangelists borrowed extensively from the stage, from epic poetry, and from the Old Testament.

A cipher is the perfect vehicle for religious conversion. If the hero can gain credibility, then the battle is won—what the hero says and does is also accorded credibility, and a new convert is gained. This is why Christianity emphasizes ‘belief’ above all. Belief is the only element able to turn fiction into history.

Once we understand (a) the main purpose of the Christian texts (doctrinal conversion) and (b) the supporting position of all the pseudo-historical material, we are then able to view the characters in a new light. As inventions, they must change as doctrine changes. After all, if the invented characters exist to serve doctrine, then no single character can convey two different doctrines—at least, not in the same text.

The early christian centuries were centuries of immense doctrinal instability, of great development and change. The change was, however, gradual, and thus many overlaps exist between doctrines and between characters promoting similar doctrines. In the last post I noted that changing doctrines can stimulate new character formation. Gradual change in doctrine even produces lineages. One important lineage is found in the Pseudo-Clementines:

1) John the Baptist has thirty disciples, including Dositheus (Rec 2:8, Hom 2:24, Gebhardt 49).
2) Dositheus takes over at the death of the Baptist (ibid).
3) Simon becomes a disciple of Dositheus (ibid). On his deathbed, Dositheus appoints Simon leader of the sect, for Simon is “the Standing One” who possesses “Sihra”—i.e. “Moon”/gnosis (Rec 2:9, Gebhardt 50).
4) Simon is the first to go out to the gentiles (Rec 3:68, Gebhardt 121). He has disciples Nicetas and Aquila.
5) Nicetas and Aquila abandon the Simonian sect and convert to Peter and Christianity (Rec 2:1, Hom 3:1, Gebhardt 46).

Above is a lineage of personages, all of whom may be ‘ciphers.’ In other words, it is possible that none of the above figures actually existed in history. Incontestable, however, is a gradual devolution of doctrine from steps 2–5, a devolution away from gnosticism to (Petrine) Jewish Christianity.

And what of step 1? What of John the Baptist? Well, his star disciple Dositheus—the one who took over the sect after John’s death—was incontestably a gnostic. Is it not all but certain, then, that his teacher was also a gnostic?

This makes good sense when we consider the name ‘John the Baptist’ from a gnostic perspective. After all, the figure is intimately linked to water (particularly the River Jordan), and we have seen that water was an important symbol of gnosis itself. The Jordan River, too, has critical gnostic implications—as we see, for example, in Mandean literature. All this increases the suspicion that ‘John the Baptist’ was originally a gnostic figure. The lineage above bears this out. Of course, this gnostic connection of John with gnosis has been carefully ignored and even hidden by the tradition.

The above lineage is revealing. Instead of gnosis going directly back to John, the Jewish Christian tradition interposed two artificial figures: Dositheus and Simon Magus. Thus, the claim could now be maintained that gnosticism went back to these intermediaries and not to John himself. After all, John baptized Jesus, and John’s name had to be kept ‘clean’ of all heretical associations. Nevertheless, gnostic clues remain: John is associated with water; he has thirty disciples (a number associated with the moon—another symbol for gnosis); and Simon Magus—John’s eventual heir—consorts with ‘the Moon’ (Sihra, Luna, Helena).