Dr. Detering begins a fairly lengthy section of his paper (pp. 26—42) with a review of the sect of the Therapeutae as reported by Philo. The sect holds a special importance for Detering, for he places it not only at the very heart of Christian origins—that is, at Alexandria—but also at the crossroads between Buddhism and Christianity. In other words, Detering concludes that the Therapeutae were a critical lynchpin between Buddhism and the gospels. Though we have already discussed the Therapeutae at length (posts 5-8), we will here attempt to place the sect within the wider historical perspective.

We may wonder that Philo’s De Vita Contemplativa is the only surviving report on the Therapeutae. One cannot summarily assume that the Church suppressed knowledge of this important sect. After all, the early Church considered them (pace Eusebius) to be early Christians. We actually owe it to the Church for having preserved what we know about the Therapeutae. On his p. 28 Detering discusses this and points out that only in the 19th century was doubt cast on the Therapeutae as an early Christian sect. Doubt even extended—particularly in Protestant scholarship—to Philo’s authorship of De Vita. However, in an in-depth investigation of vocabulary, syntax, and tone, F.C. Coneybeare detected no signs of extra-Philonic authorship. He convincingly reaffirmed that Vita was an early work by Philo, one dating to the first quarter of I CE.

But the long-accepted chronology of Christian origins is now breaking down. The first major crack in this breakdown is the dating of ‘Jesus’: mythicists are now coming forward with various convincing arguments (including the bogus archeology of Nazareth) that the Nazarene did not exist until he was invented in the first half of II CE—an entire century later than the standard dating. A second major crack is that the New Testament gospels and the Acts of the Apostles are also proving to be second century writings.

A third fissure in the breakdown of New Testament chronology is barely known and has to do with the thesis that ‘Christianity’ in fact goes back to the early first century BCE. This relates to my own work on Yeshu ha-Notsri. The most extensive data on Yeshu has been collected in my book NazarethGate (chapter 14). Yeshu died c. 75 BCE at the hands of the Sanhedrin, perhaps by crucifixion. As far as I know, the Yeshu-founder-of-Christianity thesis is the only one that chronologically accommodates the Therapeutae as early ‘Christians.’ In my opinion, the very existence of the Therapeutae—and their unambiguous and critical dating by Philo to the early first century CE—is powerful evidence that the origins of Christianity indeed must go back to the first century BCE.

Of course, dating Christianity from early I BCE puts an entirely new complexion on the first century CE. That century was not the incipience of the Christian religion, as has always been thought. Rather, I CE was already a full century after the death of the founding figure. What I am proposing, then, is nothing less than a wholesale revision of early Christian chronology. I am, of course, also proposing much more: that the religion goes back to Yeshu ha-Notsri and, before him, to Buddhism.

In this new chronology, I CE emerges as a time of ripe development, an era already several generations after the founding figure. Accordingly, it was a time when divisions in the fellowship would by then be expected. After one hundred years, the early unity of a small band of followers would naturally give way to the fracturing pressures of a growing fellowship. And that is precisely what history confirms: in the first century CE the Hellenists broke away from the Judaists.

No eye witnesses to Yeshu would have survived into I CE. By the turn of the era, it appears certain that already a great deal of biographical data regarding Yeshu had been lost. He was already a mystery figure quickly receding into the fog of myth. Soon, he would be made into a God and given an entirely new biography.

In this new chronology, a great amount of accumulated data relative to I CE make a great deal more sense. Not only does the extension of Jewish Christianity into the gentile world become more understandable, but the appearance of ‘Paul’ (or, at least, the appearance of some of his epistles) and the activity of ‘Simon Magus’ take their rightful places as leaders of breakaway movements from an earlier proto-gnosticism.

We have examples of that proto-gnosticism—the Gospel of Thomas being the outstanding representative text, a text that does not know Jesus of Nazareth, the cross, or miracles.

Obviously, the new chronology affects everything.

On p. 31 of his article, Dr. Detering summarizes Philo’s information on the Therapeutae. The Alexandrian author derives the name either from the Greek therapeuein, “heal,” or from their worship of “the living God” (Vita 2). Modern scholarship has come up with various theories. Celia Deutsch points to resonance with what Philo writes elsewhere regarding the Levites: “the fountain of contemplation of the only wise being… inclined to minister to him” (Sacr. 119).

For me, a suspected Levite-Therapeutae connection has immediate interest. My ongoing research suggests that the deprecated Levites were guardians of proto-gnostic/esoteric traditions in Old Testament times. Interestingly, according to the still unpublished Acts of Mark, the apostle Mark was a Levite follower of John the Baptist. Also, according to that text, Mark hailed from Alexandria.

Buddhism was known in Egypt since Emperor Ashoka sent Buddhist monks/missionaries to the West c. 250 BCE. Detering notes that the American scholar Zacharias Thundy in 1993 proposed a derivation of Therapeutae from Pâli Theravada, literally “way of the elders”—the designation for one of the earliest and most enduring schools of Buddhism, still extant in Sri Lanka, Thailand, and Burma. (Hinayana [“Lesser Vehicle”] is a pejorative term for the Theravada movement. It is used by adherents of the later Mahayana [“Great Vehicle”] to disparage the earlier religion.) 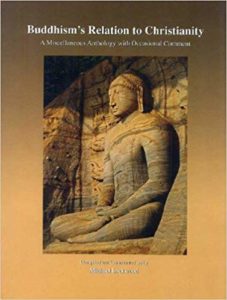 Another proposal derives Therapeutae from Pâli Theraputta, “Son/Scion/Disciple of the Elder.” Michael Lockwood discusses this derivation in his 2010 book Buddhism’s Relation to Christianity (Tambaram, India, p. 99):

The Buddha’s knowledge, then, was to be passed down generation after generation of monks, under the guidance of leading Elders (‘mahâ-thera-s’) who had attained a thorough knowledge of the doctrine. It is in this sense that the term ‘theraputta’ came to be applied to Buddhist monks in a monastery under the leadership of a Mahâ-Thera (‘Great Elder’). ‘Theraputta’ (Pâli) is a compound of the two words: thera = elder, and putta = son(s).

Phonetically, Therapeutae and Theraputta match perfectly in every respect, both as to consonants and also vowels. Now, if the Alexandrian sect indeed called itself “Disciples/Scions of the Elders,” that would indicate that the Therapeutae self-identified as a western Buddhist sect, and that they did so already at the turn of the era. Detering accepts something along these lines when he boldly concludes (p. 33): “The Therapeutae were Jewish Buddhists!”

Detering then considers the fuller title of Philo’s essay, which reads: “On the Contemplative Life or Suppliants” (Yonge translation). It has been proposed that the word hiketwn, “suppliants” (gen. pl.), references the Sanskrit/Pali concept of beggar, bhikkshu/bhikkhu. In Buddhism, the Bhikkhu is the standard term for monk—because the monk asks/begs his food from the laity (i.e., he is a “suppliant”). If valid, this suggests that the Therapeutae were related to bhikkhû (pl.), Buddhist suppliants/monks. Yet, it must be admitted that Philo nowhere indicates that the Therapeutae begged for their food.

Gk. hiketwn has also been translated as “those imploring refuge” (Ger. Shutzflehenden). Detering apparently relies upon Celia Deutsch for this interpretation (p. 31, cf. 34). If valid, it opens the door wide to Buddhism, a religion that has traditionally seen itself as the one and only true “refuge.” The problem here is that, according to my Liddell-Scott Greek Lexikon, hiketeuein does not mean “to implore refuge” but simply “to beseech, supplicate.” The difference is substantial, for Buddhists are not typically beseeching or supplicating—they are actually quite proud of their abilities, independence, and accomplishments on the spiritual road towards earning their way to nirvana/enlightenment. In sum, one must be extra-cautious when seeking out linguistic parallels between widely separated languages and cultural spheres.

According to Philo, the Therapeutae existed throughout the known world; shared possessions in common or gave them up entirely; ate, dressed, and lived simply; and spent most of their time in solitary meditation. Remarkably, all of these traits are Buddhist! The last makes one wonder if the Therapeutae were implicated in the early history of monasticism in the West. After all, there is absolute certainty that Buddhism rightly claims to be the first monastic religion.

Among the Therapeutae, both men and women came together every seventh day for a sacred supper. Every 49 days they not only had the sacred supper together, but then spent the entire night in song and holy celebration (cf. the pentecost, or eve of the 50th day—discussion here). Their sacred nocturnal mystery celebrated the passage of the Israelites across the Red Sea (or, as we have seen, across the Yam Suf—“Sea of the Ending”) through ecstatic concerted singing. We may suppose this singing was largely improvised through the night and akin to many independent voices raised in exaltation. Nevertheless, Philo writes that it made “a truly musical symphony” and perhaps certain hymns also figured in their nocturnal celebration (cf. my suggestion relative to the Odes of Solomon). Philo describes the goals of their nocturnal mystery: “imploring tranquillity and truth, and acuteness of understanding” (i.e. gnosis).

Details of Therapeutic ritual that are not yet understood include their sacred use of bread, salt, and springwater. The last reminds one of the ancient gnostic equivalence made elsewhere in these pages: (running/living) water = gnosis. Philo also tells us that the Therapeutae interpreted scripture allegorically (as did Philo himself), in which the “express commandments seem to be the body, and the invisible meaning concealed under and lying beneath the plain words resembles the soul” (De Vita 78). This reminds one also of the hermeneutics at Qumran, and suggests that the Therapeutae held esoteric views.

Philo closes his account noting that the Therapeutae are “citizens of heaven and of the world” and that they live at “the very summit and perfection of happiness.” The motifs of perfection and already being a “citizen of heaven” echo the doctrine of realized eschatology and even suggest theosis—partaking with God in his being (if not his activity as creator). The motif MAN –> GOD is one hallmark of gnosticism, a path that led to the predictable accusation from the Church Fathers of “arrogance.”

In conclusion, innumerable threads—some demonstrable, some only suggestive—link the Therapeutae with earlier Buddhism on the one hand and with later Gnosticism on the other.