Eisler’s perceptive observations, chronicled by Dr. Detering in the preceding post, open the door upon great vistas. We must now follow those observations back into great antiquity. In Egyptian religion, Nun (also Nu) was a major god—the “father of the gods” and the god of the watery abyss. (We discuss Nun more fully in the next post.) Nun was the counterpart of the Mesopotamian god Enki—the god of wisdom/gnosis and also of the watery abyss. In later times Nun became associated with the upper waters of the sky. But we should not forget his earliest association with the deep, which still survives in the Coptic word NOUN, “abyss, deep.” (See E. Budge, The Gods of the Egyptians, 1904, I:284.)

This adds an important dimension to the appellation Joshua son of Nun. We are permitted to make the link between the biblical figure and Egypt because the rabbis themselves did so. We have seen (in the preceding post) that it was under the leadership of the foremost Ephraimite by the name of Nun that the Israelites made their first attempt to escape from Egypt. This Ephraimite leader failed in the attempt and was killed. In Jewish lore, the Egyptian Ephraimite Nun’s descendant, Joshua/Jesus, became the failed messiah—the first messiah—who preceded the successful Davidic messiah. Thus, we have a parallelism:

There is more to be said by linking Jesus/Joshua with Nun, the Egyptian Father of the gods. In short, ‘Joshua the son of Nun’ is no less than ‘Jesus the Son of God’—precisely as we read in the New Testament. Furthermore, the Egyptian god in question was not a lesser god: he was the “father” of all. He created the other gods, even the great Osiris, and it was also from Nun that “the world was created” (Budge). Nun came first in the Egyptian pantheon (Budge, ibid., 283) at the head of all the gods.

The foregoing lends great weight to the theory that Early Christianity was deeply linked to Egypt. We have clues of this in the early sources: in the New Testament, Jesus (inexplicably) spends his early years in Egypt. Historically, too, we know that the earliest Church was somehow linked to Egypt. In Christian tradition, does not the first evangelist, Mark, hail from Alexandria? And now we see—according to Dr. Detering’s provocative theories as revealed in these posts—that the Therapeutae of Alexandria were likely among the earliest Christians.

Detering has linked the Therapeutae with Buddhism, and also with Judaism. He calls them “Jewish Buddhists.” I agree with that assessment. However, I am here adding a further layer of influence upon Early Christianity: the influence from Egyptian religion. This influence was strong and it particularly informed the figure of Jesus as the Son of God. This occurred through a process: (1) the Egyptian principal god, Nun, was credited with a son. (2) That son was identified by some Jews with the hero who entered the Promised Land: Joshua, “the son of Nun.” This identification apparently took place while in Egypt and far prior to the writing of the Old Testament, where Joshua appears as the “son of Nun.” Thus, we cannot ignore very early Egyptian influence upon Jewish religion.

When could such influence have occurred? The answer is not far to seek: it occurred in primordial times, when the Israelites were still in Egypt. This lends credence to the thesis that a movement of Jews from Egypt to Israel indeed took place in the Iron Age (if not earlier). The account in the Bible is certainly embellished, yet it preserves the memory of an actual historical migration—a migration that occurred after the Jews had organized into a distinct people—an organization that took place in Egypt. They did not originate in Palestine (Abraham), go to Egypt (Joseph), and then return to Palestine (Moses-Joshua). The Hebrews were born in Egypt. The patriarchal narrative is so much priestly revisionism concocted to obscure the origins of the Hebrews in the land of Egypt, a hated land that came to be a symbol and mantra of imprisonment.

We now come to a key consideration: the nature of the Egyptian god Nun. Why is this critical? It is so because heterodox Jews—and later the Christians—claimed sonship to that god. In Judaism, this tradition was ‘heterodox’ because it recognized Joshua as the great liberator instead of Moses. Indeed, we know this exalted view of Joshua was held in Samaria and among the ‘tribe of Ephraim’—whose great ancestor was the liberator Joshua/Jesus himself. It would appear that Christianity, in turn, was somehow linked to this heterodox Samaritan movement, for it also venerates Joshua (= Jesus) the Son of God (= the all-creator, Nun).

In the Old Testament, Joshua is clearly subordinate to Moses. Yet clues exist where Joshua is particularly exalted: 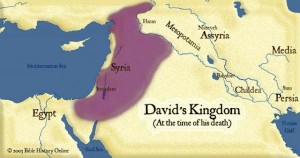 The vast kingdom of David,
completely unattested except in Jewish scripture.

Normative Judaism was centered in Jerusalem/Judah and on the figure of David. However, archeology is showing that Jerusalem was actually an unimportant village in the Iron Age (T. Thompson, T. Bolin, K. Whitelam). It appears that the mythology surrounding David and Solomon, as well as the grandeur of Jerusalem (and the exaggerated extent of David’s empire, from Egypt to the Euphrates)—that all this was largely a reaction to the more imposing (though still comparatively small) Northern Kingdom of Israel, centered in Ephraim/Samaria.

So it is that the Jerusalemite Aaronide priests of the Second Temple countered the already-existing northerly traditions regarding Joshua, son of Nun. They did this by—wherever possible—emphasizing Jerusalem, the Temple, David—and Moses. They exercised their pens mightily, and concocted the pseudo-history that we read in Jewish scripture. The Aaronides co-opted Joshua and made him into a Yahwist. One clue is that their great Yahwist hero, Moses, named him: “Moses gave Hoshea son of Nun the name Joshua” (Num 3:16).

The name change is revealing. Hoshea (הושׂע) means “Salvation,” pure and simple. That name was far too exalted for the authors of the Old Testament history, and hence it was not satisfactory. They had their hero Moses change it to Joshua (יהושׂע), pronounced Yehoshua (with Masoretic pointing), and now simply meaning “Yahweh/Yehu Saves” (BDB 221, 448).

Samaritans: Heirs of the northern traditions

Samaria was the center of Israel (the Northern Kingdom) in the so-called Divided Monarchy. Before proceeding, however, two similar words must be distinguished, for they overlap and have caused much confusion: Samaritan and Samarian. Technically, inhabitants of Samaria (the province) are Samarians. Their capital is the city named Samaria (from which the region receives its name). On the other hand, Samaritan is a religious term. Even in scholarship, the terms are confused and used indiscriminately.

The tribes that inhabited Samaria were Ephraim and Manasseh, the former being the more prominent. Now, the father of Ephraim was Joseph. In Samaritanism we encounter a Josephite or “King Joseph” (Joseph Malka) tradition. This is of some interest in connection with Christianity, for Jesus was also the son of a certain Joseph.

Very little is known of Samaritan history. This largely owes to the fact that their own religious documents are comparatively late and are productions of the priests writings well into the common era. Yet it is clear that from early times Samaritanism was not monolithic. It had two major historical factions. The first and apparently original faction was associated with Dositheus, a nebulous prophet who lived around the turn of the era. Indications point to quasi-gnostic tenets among the dositheans, including a veneration of water: “However, [Dositheus] charged that no one was to come near these pieces of paper [his sacred writings] until after that person had gone down into this pool and dipped himself in it…” (Bowman, Samaritan Documents, 164). In these posts it has been intimated that the ‘pool’/water = gnosis.

The Dositheans exalted Joshua/Jesus and his forebear Ephraim. The rise of Dositheanism about the turn of the era, the gnostic undertones, their veneration of Jesus/Joshua ‘son of Joseph,’ and the locus of Samaritanism in the north should give us pause, for these all have enigmatic echoes with early Christianity. It is not possible here to flesh out the connections between Samaritanism/Dositheanism and Christianity. Though the historical links are still buried, I date Dositheus to the early first century BCE and identify him with Yeshu ha-Notsri—as those of you who have read the final chapter of my book NazarethGate know. I also agree with some specialists on Samaritanism and date the Dosithean ‘heresy’ before what became normative (priestly) Samaritanism. I contend that the Christian savior descends directly from the Dosithean tradition.

Another aspect of early Christianity resonates with Samaritanism: the violent opposition to Jerusalem and its priesthood. The gospels are replete with this opposition. In tone, the canonical Jesus embodies a deep anger towards Jerusalem which is at home in the northerly province of Samaria. Josephus places this anger in contemporary context with his descriptions of the back-and-forth massacres between Samaritans and Jews (Wars II.12. For varying points of view, see S. Huller, The Real Messiah and here; L. Einhorn, A Shift in Time 57 ff.)

We have now delineated a heterodox religious movement, or ‘thread,’ that spans over two thousand years. It reaches from ancient veneration of the Egyptian god Nun, through ‘underground’ Jewish veneration of that god’s son Joshua, down to the Christian Jesus, Son of God. The thread was proto-gnostic and stubbornly repudiated by the religious establishment in every era. We will consider that theology in the next post, including the critical consideration that originated the entire esoteric thread: the nature of the god Nun.