The great Egyptologist E.A. Wallis Budge (1857-1934) bequeathed to posterity massive tomes on ancient Egyptian religion, volumes filled with an equal mixture of primary data (facsimiles, translations, diagrams) and expert commentary. I happen to possess two of Budge’s most important works, The Gods of the Egyptians (1904/69), and his translation of/commentary on the enormous Papyrus of Ani, better known as The Book of the Dead (1920/60).

To call Budge a mere “Egyptologist” does not do him justice. The scholar’s knowledge was encyclopedic, as witnessed by his first official position as Curator of Assyrian antiquities at the British Museum. Astonishingly, Budge was also familiar with little-known Christian gnostic literature from the Levant, literature that first came to light during his lifetime (see below). 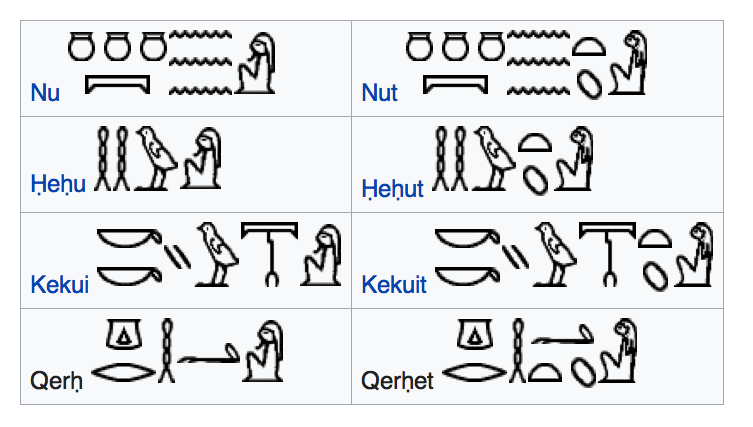 Wallis Budge was quick to note that the religious pantheons of both Mesopotamia and Egypt were virtually identical. In comparing the Enuma Elish/Seven Tablets of Creation with Egyptian pyramid texts, he finds the same pantheon of gods in both East and West—a divine ogdoad composed of pairs of divinities, four male and four female. At the head of the Egyptian pantheon is the divine pair Nu(n) and his consort Nut. Nun was closely associated with the substance water. His divine sign includes three vases of water (conveying the sound), together with the substantive for water (three wavy lines one above the other). Nu “has been compared with the Coptic word NOUN, ‘abyss, deep’… Nu was the inert mass of water matter from which the world was created” (Gods 284).

Budge observes: “Apzu-rishtu and Mummu-Tiamat are the exact equivalents in the Babyonian cosmology of Nu and Nut in the Egyptian…” (Gods 289). Apzu-rishtu (lit. “Deep-Water-First One”) is the progenitor of Ea/Enki, the father of hidden truth whose home was the deep water (Abzu/gnosis) and whom we have already met in these posts. Tiamat is “the name of the female counterpart of Apzu-rishtu” (Gods 288). Budge continues:

… Now up to this point the three pairs of gods of the Assyrians agree exactly with the first three pairs of gods of the oldest Egyptian company of the gods, and the points of resemblance are striking… It is surprising therefore to find so much similarity existing between the primeval gods of Sumer and those of Egypt, especially as the resemblance cannot be the result of borrowing… We are therefore driven to the conclusion that both the Sumerians and the Egyptians derived their primeval gods from some common but exceedingly ancient source. (Gods 289-90).

As Budge surmised, the identities of the divine ogdoads in East and West betray not only a shared origin but show that man’s earliest common spirituality predated civilization and went back even earlier—that is, to Stone Age times. This was a proto-gnostic spirituality, one in which the element of water had a central significance, eventually symbolizing gnosis itself. This earliest religion of man reflected a substantially different worldview from the one that obtains from the dawn of civilization to this day. Belief that truth is immaterial, unseen, veiled, and somehow ‘other’ certainly goes back at least to the Neolithic era. This is compatible with what we call ‘gnostic dualism.’ In short, gnosis was man’s first religion. And it makes sense: in the Stone Age the environment had not yet been tamed and the world was a very brutish place. Materiality was merely the source of pain and confusion. In those long-lost eons before history, however, the goals of life were the same as those enunciated in later historical times by Christian Gnostics: understanding, escape, and transcendence. 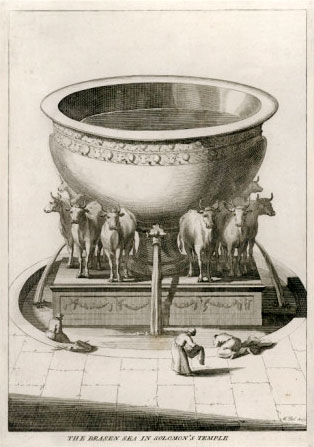 A reconstruction of the brazen sea (Abzu) in Solomon’s Temple.

The association of gnosis with water is also primordial. In Neolithic Britain, for example, burials were often made in water and Stonehenge is situated next to the sacred river Avon. The gnostic spirituality associated with water was so old, and so well entrenched, that it is reflected in the first and most important ‘water’ gods (Nun and Ea/Enki). This theology, though soon eclipsed (see below), survived well into the Iron Age and even later. Thus we find in Solomon’s temple, and in temples throughout the Levant during the Iron Age, a great brass cauldron filled with sacred water. According to the Old Testament (1 Kings 7:23-26; 2 Chronicles 4:2-5) the cauldron was capable of containing two or three thousand baths of water and stood on the backs of twelve bulls facing outward. The bull, as we have seen, symbolized the moon and the lower realm of gnosis (attacked by the sky-bird). This shows that as late as the early first millennium the religion of gnosis still obtained in many sacred precincts. It also shows that the first religion of the Israelites and of the First Temple was not yet the Torah, but was linked to the old and universal theology of water/invisible gnosis.

However, the Middle Bronze Age (later 3rd millennium BCE) witnessed a coup d’etat in the pantheon, as sky gods replaced water gods, upper replaced lower, and (as discussed here) the seen replaced the unseen. Religious mythology and literature reflected this great revolution in the heavens: Marduk (lit. “Lamb of the Sun”) replaced his father Ea/Enki in the pantheon; Marduk dismembered Tiamat in the heavens; and from Tiamat’s body Marduk formed the earth. The change in spirituality coincides with the Aryan invasions of the Levant. From that time onwards, civilization was essentially materialistic, pragmatic, and patriarchal.

After the ascendency of the Aryan sky gods in the Middle-Late Bronze Age, the gnostic worldview became esoteric. It continued but went underground and no longer belonged to the common folk. Henceforth the gnostic water cult is found only on the fringes of civilization and in esoteric traditions—except when it erupts in the most surprising ways, such as in the Christian sacrament of baptism, in Mandaism, and in the innumerable baptist cults that flourished around the turn of the era.

In reviewing Budge’s observations concerning the god Nun, it becomes clear that this god was somehow linked to the distant, foreign, even ‘absent’ god of the Gnostics. While Nun was creator—thus apparently assuming the role of the later Demiurge—he is “an inert mass” (Gods 302) yet at the same time all-powerful (or all-pervading). It is clear that, for the ancient Egyptians, Nun was the passive aspect of the godhead and simply too exalted to be actively involved in the shoddy world of materiality. Only by means of a series of emanations from Nun does matter come about. In the first instance, “Shu and Tefnut were raised up from out of Nu wherein they had been” (Gods 303). Man is created not by Nu(n) but indirectly by another god (Khepera, Ra, Shu, or Tefnut) or even “by accident” (Gods 305). Budge summarizes: 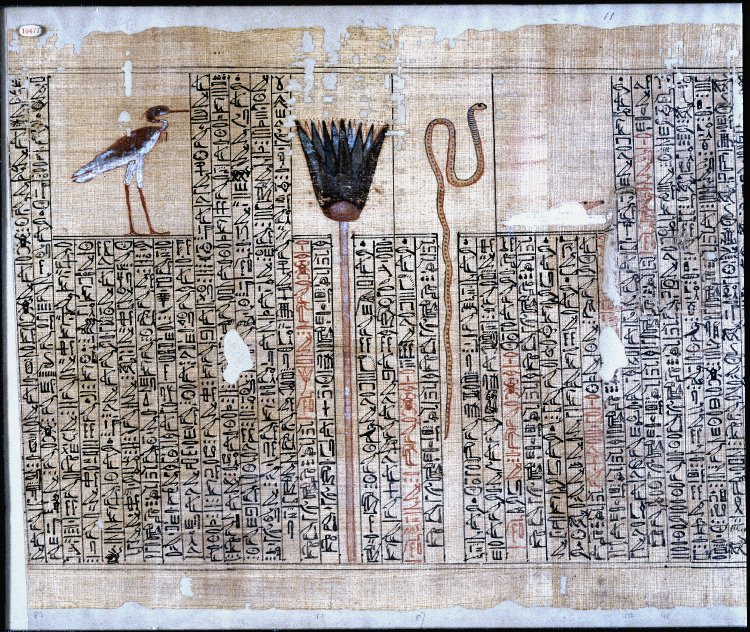 The Egyptians thought that a self-begotten and self-existent god [Nun] lived alone in a primeval watery mass, which was itself part male and part female… and that the mass was of unlimited extent, and was eternal, and was enveloped in thick darkness. The self-existent god, at some unknown time and for some unknown reason, uttered his own name as a word of power, and he straightway came into being under the form of the god Khepera. He next roused the soul of the watery abyss out of inactivity, and then having brought some influence, probably by the utterance of certain words, to bear upon his heart, he produced some material place, probably the earth, whereon he could stand. From this place he produced the gods Shu and Tefnut, which act resulted in the immediate creation of light and in the dispersion of darkness, and in the formation of the sky or firmament. These acts were followed either by the creation of men and women, or by the creation of vegetation and creeping things and reptiles of every kind… (Gods 306-07)

The resonances with later Gnostic Christian thought are striking. We note: (a) the distant, uninvolved god; (b) who is also male and female (androgynous); (c) who produces intermediate emanations; (d) that ultimately lead to the creation of man, woman, and of other life forms.

In Pistis Sophia we have the Virgin Mary asking Jesus, her Lord, to give her a description of ‘outer darkness,’ and to tell her how many places of punishment there are in it. Our Lord replies, ‘The outer darkness is a great serpent… [etc]’ It is quite clear that in the above extract from the famous Gnostic work we have a series of chambers in the outer darkness which has been borrowed from the twelve divisions of the Egyptian That already described, and the reader has only to compare the vignettes to Chapters 144 and 145 of the Book of the Dead with the extract from Pistis Sophia to see how close the borrowing has been. An examination of another great Gnostic work, generally known as the Book of Jeu, proves that the Underworld of the Gnostics was nothing but a modified form of the Amentet or Amenti of the Egyptians, to which were added characteristics derived from the religious systems of the Hebrews and Greeks… (Gods 267)

An examination of the books of Pistis Sophia will show that many of the details of the ‘mysteries’ which are there described are based upon ancient Egyptian beliefs, and that the whole of the doctrine of spiritual light which is expounded therein only represents a spiritualized conception of the far-reaching character of the powers of the light of the sun upon both the living and the dead, which the dynastic Egyptians recognized and described centuries before the Christian Era. (Gods 281)

The groundbreaking work of Dr. Detering has opened the door to reconsider Budge’s views with special attention now to the link between ancient Egyptian religion and Christian Gnosticism. It will take a specially gifted scholar—an Egyptologist who is also trained in Christian origins—to resume the thread that Budge left hanging in so tantalizing a fashion and to continue along this path (one of many) that Detering has now opened. To my knowledge, no such Egyptologist has appeared. However, if ‘Joshua Son of Nun’ originally had any link to the great Egyptian god—as has been argued in the preceding post—then such an investigation is long past due. Furthermore, the door is now open to consider whether the new Joshua of Christianity—Jesus—was in some way the ‘Son’ of the remote gnostic Father prefigured by the great god Nun thousands of years earlier.