Dr. Detering’s overall conclusion
[I translate his final section in toto below. Emphases are added.—R.S.]

[Dr. Detering writes:] Beginning with the gnostic interpretation of the Exodus motif and the question of its origin, we have arrived at an element of critical importance: the metaphor of transcendence, expressed figuratively as [reaching] the “other shore”—which plays a central role in Indian/Buddhist spirituality. The question of where the two trajectories intersect—Jewish tradition/Hebrew Bible on the one hand, and Buddhist/Indian spirituality on the other—led us to the Therapeutae, about whom Philo of Alexandria reports in his De Vita Contemplativa.

Once the Buddhist origin of the Therapeutae is seen as plausible, it can be shown that their central mystery consisted of an interpretation of the Exodus, an interpretation based upon Buddhist sources. This interpretation, in turn, was the seed of the Christian sacrament of baptism. Early Christian gnostics, such as the Peratae and the Naassenes, transferred to Moses’ successor Joshua what the Therapeutae (more strongly rooted in Jewish tradition) maintained for Moses. The old cult of Moses would be surpassed by the new, Gnostic-Christian cult of Joshua. The counterpart of Moses became Jesus/Joshua.

Seen in this light, the “historical” Jesus, that is, Jesus of Nazareth, was hypostatized in the second century of our era out of the Old Testament Joshua. The Christian savior Joshua/Jesus is nothing other than the result of Jewish-Buddhist exegesis of the Old Testament.

My conclusion to the commentary series
R. Salm

Dr. Detering has opened the door to a new way of viewing the origins of Christianity. It is no longer a phenomenon that began in the first century CE with the life of Jesus of Nazareth. Already at the turn of the era the seeds of Christianity had been sown. Detering points to the Therapeutae as a critical link between Christianity and Buddhism. That sect is described by Philo Judaeus, who lived and wrote in the first decades CE. This indicates that the sect was already in existence before the alleged time of Jesus of Nazareth.

We have seen that ancient sources (including some Church Fathers) considered the Therapeutae to be Christians. Detering agrees. Furthermore, he proposes that Therapeutic teaching and praxis link on the one hand back to Buddhism, and on the other hand forward to Christian gnostic doctrine. The nub of this link derives from the sect’s view regarding ‘crossing over’—a critical concept meaning many things, but particularly the self-transformation from ignorance to gnosis (death to life, darkness to light, etc). For Detering, this central concept also links the Therapeutae with Joshua ben Nun and with a core event in Jewish mythology: the crossing of the Jordan River. That crossing, so vital in Jewish mythology, was reinterpreted by early Christian gnostics in a spiritual way. Their reinterpretation, in turn, was known to the evangelist Mark. In Mark’s gospel, Jesus repeatedly crosses the Sea of Galilee ‘to the other side.’ Detering’s analysis and the foregoing discussions now open the door to an allegorical understanding of those Marcan passages.

According to the foregoing view, earliest Christianity was a religion of ‘crossing over.’ Both Dr. Detering and myself have argued that ‘the other side’ was originally a gnostic construct: the transformation from ignorance to gnosis. Of course, the gnostic way has long been marginalized in Christianity, yet in the 20th century it came to the fore once again with the discovery of the Nag Hammadi Library. The Dead Sea Scroll findings also support the notion of an early Christian—or ‘pre-Christian’—proto-gnosis. After all, the Qumran writings include the tradition of Saving Wisdom, and even the concept that the Qumranites themselves (Essenes?) were ‘Angels’ possessing special divine knowledge (cf. the Songs of the Sabbath Sacrifice, the Thanksgiving Hymns).

Once a proto-gnostic movement in Palestine about and before the turn of the era is admitted, then the door opens wide on possible influence from distant Buddhism. Detering boldly confirms such influence. Some of my own past writings also support this view. My book Buddhist and Christian Parallels (available free online) sets forth myriad ethical and sapiential similarities. It consists of 57 chapters and well over one hundred citations. They demonstrate, point by point, a conclusive relationship between the original Buddhist and Christian religions at a fundamental level.

It is also well known that Buddhist contacts with the West began no later than Emperor Ashoka’s missionaries, sent out ‘all over the world’ c. 250 BCE. (On this see also here.)

When one takes Buddhist influence seriously, and when one recognizes the Therapeutae as a western outcome of that influence, then the emergence of Christianity suddenly presents itself in an unfamiliar light: (1) First of all, the traditional chronology must be substantially revised—Christian origins are no longer pegged to Jesus of Nazareth in the early first century but must antedate the already-established Therapeutae (at the very least). In short, the traditional Christian chronology is late by perhaps a century. (2) Secondly, the nature of earliest Christianity radically changes: once one jettisons Jesus of Nazareth (as one must do, per point [1]), then the religion loses its focus on the Son of God born of a virgin, who preached and healed the sick, and who died for our sins and then resurrected on the third day. In place of this late (indeed, mid-second century) Hellenistic romance, what emerges is a proto-gnostic religion in some way linked to Buddhism. That early religion is more closely tied to heretical Christian gnostic writings (e.g. the Nag Hammadi Library) than to Pauline/New Testament Christianity—which is late.

The early chronology that results from Detering’s views regarding pre-Christian Buddhist contact, the Therapeutae, and Joshua ben Nun are also fully compatible with my theory that a Jewish prophet, Yeshu ha-Notsri, fled to Alexandria ca.100 BCE and there converted to Buddhism. If Yeshu (crucified c. 75 BCE) were actually at the root of Christianity, this would allow plenty of time for the Therapeutae to arise as an early Christian sect.

I consider the intersection of Detering’s and my views more than fortuitous: it is a powerful indication that we are on the right track, for both he and I arrived at our conclusions by entirely different methods and quite independently. I have found Detering’s non-traditional views to be remarkably correct at other seminal junctures (especially as regards the second century CE dating of the Pauline epistles). In addition, his scholarly credentials are unimpeachable. These facts bolster my confidence that we are indeed on the right track, that Detering’s long article on ‘crossing over’—presently under examination—augurs a sea change in the study of Christian origins, and that this extended commentary series is more than justified. In agreement with Dr. Detering, I have long suspected a link between Buddhism and Christianity. The fortuitous confluence of our views at a deep level explains my particular interest in Detering’s ground-breaking article under consideration in these posts.

My research (detailed in NazarethGate, chapter 14)—largely dependent on obscure Rabbinical sources—reveals that Yeshu ha-Notsri was a well educated Jerusalem Pharisee, privy to the upper echelons of power in the time of Alexander Janneus (early first century BCE). This ruler, however, was in an adversarial relationship with the Pharisees—it was Janneus who infamously crucified 800 Pharisees in one day while looking on carousing. The young Yeshu (perhaps not his real name) had fled to Egypt with his mentor, Joshua ben Perachiah. Yeshu returned to Palestine after perhaps twenty years in Egypt. He preached among the Jews, was arrested, tried by the Sanhedrin, and “hung on a tree on the eve of Passover” (b. Sanh. 43a). In my opinion, Yeshu’s name, together with these other details of his story, constitute far too many parallels with the Jesus story in the gospels to be mere coincidence. I have proposed that Yeshu’s story reappears—with remarkable faithfulness, all things considered—in the canonical gospels.

The Talmudic records offer hints of Yeshu’s teaching—hints that point in a decidedly gnostic direction. Here, too, there are many Christian parallels. There are also Buddhist parallels. Buddhism is the gnostic religion par excellence: in Buddhism, gnosis is accessible to all and can lead the sincere seeker to enlightenment/salvation in this very life. The Buddhist aspect of Yeshu/Jesus’s teaching is particularly evident in the Gospel of Thomas. But it is also readily detectable in the canonical gospels, where the gnostic elements are often veiled in inscrutable parables and couched in pithy logia.

In short, my research has led me to the conclusion that Yeshu ha-Notsri was the actual founder of Christianity.

Dr. Detering’s work results in a new chronology of Christian origins with impacts in both directions—later (the Pauline epistles as well as the canonical gospels move forward in time to the second century CE) and earlier (the origins of Christianity move backward in time to the generations before the Therapeutae). As regards the earlier direction, this New Christian Chronology also places the Dead Sea Scrolls/Essenes/Qumranites in a very interesting light: they could be an early manifestation of Yeshu’s teaching. 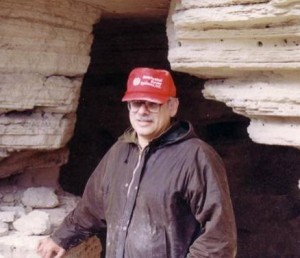 Dr. Robert Eisenman at the mouth of
Cave 4, Qumran.

Dr. Robert Eisenman has proposed, in several large tomes, that Christian elements are to be found in the Dead Sea Scriptures. Contrary to the consensus in DSS scholarship, Eisenman insists on dating some scrolls to the first century CE. This enables him to date the composition of some of the Qumran writings to about the traditional time of Paul, who (according to the consensus chronology) was writing his epistles during the 50s CE. However, the New Chronology proposed here (going back to Yeshu ha-Notsri) makes such a one-century shift of DSS documents unnecessary. Eisenman’s theory, in the main, can still be correct—but now without the awkward need to shift any scrolls to the first century CE.

Yeshu ha-Notsri was crucified c. 80-75 BCE. The Essenes could have been among his early followers. Indeed, the Qumran writings betray a gnostic tendency not otherwise found in Judaism, some also with Buddhist overtones. From the vantage point of this proposed New Chronology, the sectarian DSS emerge as an early attempt to fuse Yeshu’s quasi-Buddhist teaching with traditional Judaism. Of course, this vantage point is entirely new. I don’t believe anyone else has proposed that we view the Dead Sea Scrolls from a perspective that includes Judaism, gnosticism, and Buddhism.

The priority of gnostic Christianity

Dr. Detering’s work—particularly regarding the Therapeutae as “Jewish Buddhists”—not only impacts the chronology of early Christianity, but also its nature. The first casualty of the New Chronology is, of course, Jesus of Nazareth himself. We recall, however, that Jesus of Nazareth—and the canonical gospels themselves—are secondary to the Pauline kerygma and are all Catholic efforts to illustrate that kerygma—to bring the ‘proclamation’ to the masses. (On this, see Tom Dykstra’s book, Mark: Canonizer of Paul, reviewed on this website beginning here.) In this regard, the gospels have been phenomenally successful.

The New Christian Chronology proposed here shows that the Pauline kerygma, Jesus of Nazareth, and indeed the entire New Testament are all later developments in Christian history. Before the composition of the gospels (mid-II CE), a long 200+ years had already elapsed since the death of Yeshu ha-Notsri. That is a lot of time. It allows for many stages and movements, including the Essenes, the Therapeutae, and the prevalent pre-canonical view of ‘Jesus’ as the mobile, spiritual Power of God that indwells the saintly person here below. That view of the spiritual Jesus is quite evident, even today, in many marginalized apocryphal Christian texts.

In place of the divine man of the gospels, what emerges is an early proto-gnostic religion in some way linked to Buddhism. That early religion is more closely tied to heretical Christian gnostic writings (e.g. the Nag Hammadi Library) than to Pauline/New Testament Christianity—which, like Paul himself, is late.

What Dr. Detering’s work points to, in sum, is a completely new account of Christian origins.