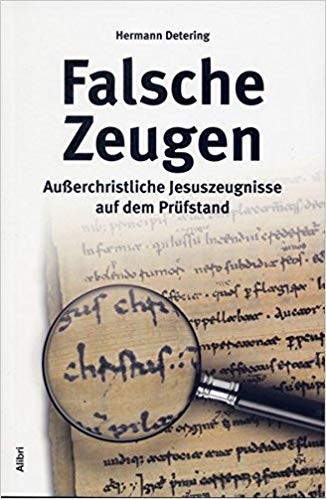 2011. Publication of Detering’s book FALSE WITNESSES (Falsche Zeugen: Ausserchristliche Jesuszeugnisse auf dem Prüfstand; 243 pp., Alibri). In this important book, HD argues in detail that the earliest (first century) mentions of Jesus in the literature (by Josephus, Suetonius, Tacitus, etc) are later Catholic interpolations. Comment: The bogus earliest textual ‘witnesses’ to Jesus of Nazareth are one of the pillars of the Jesus mythicist argument. Due to its significance in any primary database regarding the historicity of Jesus of Nazareth, this terrain has been covered often and exhaustively (also by R. M. Price, F. Zindler, and R. Carrier). However, Detering’s German book probably represents the fullest and most convincing treatment of the issue to date.
Detering defends his book’s conclusions and questions the overall historicity of Jesus in a 2011 German interview carried on Deutsche Welle TV. The transcript is here.
Not to be overlooked is a related 1992 article by Detering, “Der erste Clemensbrief und die Ignatianen in der Holländischen Radikalkritik.” In it Detering reviews the pertinent Dutch Radical scholarship and analyzes the many points that refute the authenticity of 1 Clement (12 points) as well as of the Ignatian letters (8 points). In arguing against authenticity, Detering leaves no text standing. For those who do not read German, an informative 2013 English review by Detering of these topics is furnished on Peter Kirby’s website, entitled “A Dialogue Concerning the Two Chief Systems Regarding Paul.”

2011. Detering and F.-J. Fabri edit, translate from the Dutch, and publish in German “Does Jesus Live—Or Did He Only Live?” (Lebt Jesus oder hat er nur gelebt?). “Even as the Dutch radical critic emphatically affirms the present reality of a living ‘Jesus,’ so he equally clearly rejects any existence of Jesus of Nazareth in history. The five texts translated here by F.J. Fabri and H. Detering demonstrate how the mythical Christ mutated into the historical Jesus of the Catholic Church.”

2012. “Eine ‘synthetisch … in eins geflossene Erscheinung’” (German article, 12 pp.) Detering considers the possibility that Jesus of Nazareth is a composite character based on one or more historical figures. He briefly reviews scholarship in this regard (Drews, Hengel, Bultmann, Schmithals, R. M. Price, etc). Detering begins with Judas the Galilean, then considers Menahem the Zelot (Josephus Jewish War) and others. Detering’s final paragraph: “All the afore-mentioned characteristics of a ‘composite figure’ are united in the gospels. At the same time, the evangelists carry forward the already-begun historisizing of salvation. In this regard they found the historical data furnished by Josephus particularly useful. Hence towards the middle of the second century the story of the God-Man Jesus Christ, born in Bethlehem and crucified under Pontius Pilate first saw the light of day.”

2012. About this time Detering begins to seriously consider possible links—both historic and dogmatic—between Buddhism and Christianity. I introduce him to my own Buddhist and Christian Parallels Compiled From the Earliest Scriptures. The themes of renunciation, asceticism, and the search for ‘enlightenment’ (gnosticism) become major pursuits of Dr. Detering. 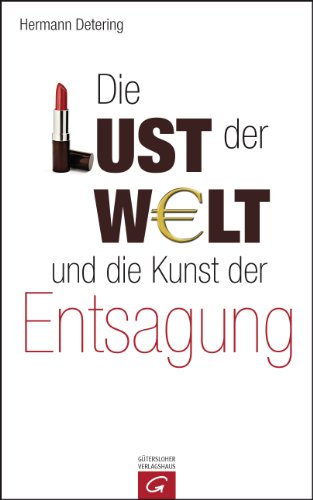 2013. BOOK: Die Lust der Welt und die Kunst der Entsagung (“The Lust of the World and the Art of Renunciation,” Gütersloher Verlagshaus, 256 pp). [From the jacket cover:] “Hermann Detering leads us intelligently and carefully through the world of renunciation and asceticism. His purview spans origins as well as modern tendencies, noting major figures including Christian mystics. Detering considers the burden of pleasure and the pleasure of renunciation. Those today not wholly lost in a jungle of indulgent consumerism will thank the author for his views. Those open to alternative possibilities, to that indefinable ‘something more,’ and to self-realization by keeping the world at arm’s length are pointed here to what is most valuable: their inner freedom.”
Cf. also Detering’s various posts on his website concerning western ascetics and asceticism, e.g. Antoinette de Bourignon, Jacob Boehme, the Shakers.

2013. German article, 92 pp: Jesus versus Jaldabaoth – Gnostische Elemente in den Paulusbriefen (“Jesus versus Yaldabaoth—Gnostic Elements in the Pauline Epistles”). The abstract reads: “The present writing draws conclusions from two observations: (1) Gnosis is a second century CE phenomenon (modern research); and (2) the Pauline epistles are influenced by gnosticism (History of Religions School). Thus, one inevitably concludes that the Pauline epistles are products of the second century. As the above two propositions continue to be challenged by contemporary theologians, we compare modern views against what is known of mythological gnostic currents of the second century CE, with particular emphasis on three passages: Phil 2:6-11 (the ‘Christ Hymn’); 1 Cor 2:6-81 (‘Lord of this Age’); and 1 Cor 15:8 (‘one untimely born’). These demonstrate: (1) In the Christ Hymn, ‘Jesus’ is the anti-type of the Gnostic god Yaldabaoth; (2) the “rulers of this age” in 1 Cor 2:6-8 are none other than the archons of gnostic mythology; and (3) the ‘one untimely born’ of 1 Cor 15:8 refers to a common gnostic topos.”