[P. 711. M. Dupont-Sommer writes:] As for the Essenes of Palestine, I wish to emphasize—and this with the greatest force—that the community’s structure clearly derived from that of Buddhism. Philo, the Jewish philosopher, characterizes that structure as follows:

In the first place, then, there is no one who has a house so absolutely his own private property that it does not in some sense also belong to every one. For besides that they all dwell together in companies, the house is open to all those of the same persuasion, who come to them from other quarters. There is one storehouse for all. Expenses are all accounted in common. Even garments belong to them all in common. Their food is common, since they all eat in refectories. There is no other people among which you find a common use of the same house, a common adoption of one mode of living, and a common use of the same table more thoroughly … (Philo, Every Good Man is Free, 85)

Josephus, for his part, writes that the Essenes “have all things in common, so that a rich man enjoys no more of his own wealth than he who has nothing at all. There are about four thousand men that live in this way, and neither marry wives, nor ar desirous to keep servants, thinking the latter tempts men t be unjust and the former gives the handle to domestic quarrels. But as they live by themselves, they minister one to another…” (Wars 18.1.5)

[712. Dupont-Sommer notes that, in its writings, the Dead Sea Sect over and over again uses the self-referential term YAHAD, “community.” He suggests that this usage parallels the Buddhist term SANGHA (Pâli)—also meaning “community” and a favorite self-referential term of Buddhist monks and nuns. DS then detects substantial parallels between Buddhism and Christianity in the Dead Sea writings themselves: “They eat in common, in common they pray, and in common they deliberate… All the members who are attached to the truth voluntarily bring to the community of God all their wisdom, all their forces, and all their possessions. The common purse is total, at least as far as the fully admitted members are concerned. Besides the donation of one’s assets, the member also gives over his daily earnings to the Overseer… Any covetousness or fraud is severely punished…”]

…For the perfect Essene, the “ardent love for one’s fellow man” is compassion, pity, assistance in need, forgiveness, pacifism, mildness and, to crown all, divine charity. Now, all the nuances of altruism are also found in the various Essene writings. For example, we read in the Rule of the Community:

[713] This is also the teaching of the Testament of the Twelve Patriarchs, an original Essene work probably dating to the first century BCE… [DS reviews similar passages from the DSS that enjoin a central tenet in Buddhism known as karma–to return good for evil in the present, and thus to ensure happiness in the future.–RS] 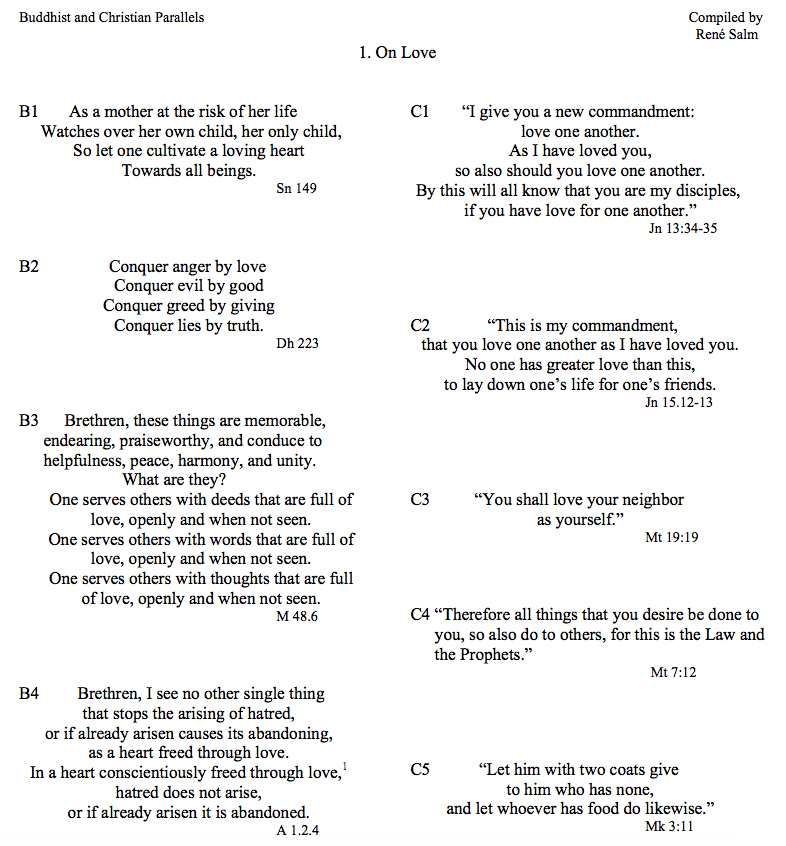 The first page of my Buddhist and Christian Parallels Compiled from the Earliest Scriptures (2004).
The section on Karma is Chapter 27. Download and dissemination of this PDF is free and encouraged,
provided attribution of authorship is given.

[714] The most cherished ideal of the Buddhist community [Sangha] was the notion of radical charity. Buddhist missionaries propagated this ideal with the utmost zeal and, indeed, we find it marvelously emulated by the Essene community. In turn, this exalted ideal is reflected once more in the Christian gospel. Here is the commandment of Jesus the Nazarene, according to the Gospel of John: “I give you a new commandment, that you love one another. Just as I have loved you, you also should love one another. By this everyone will know that you are my disciples, if you have love for one another” (13:34-35). And this from the First Epistle of John: “Beloved, let us love one another, because love is from God; everyone who loves is born of God and knows God. Whoever does not love does not know God, for God is love” (1 Jn 4:7-8).

The Essene community was the fervent heir of Israel’s past—the Law and the Prophets. Its fervor, however, led it on to further shores, namely, into the world of the most elevated pagan mysticism. Essene gnosticism is essentially syncretist. It integrates the most ardent Jewish piety with noble conceptions of a highly spiritual nature, conceptions of Hellenistic, Iranian, and even Indian provenance. Regarding the latter, we detect the unmistakeable influence of Buddhism. Naturally, this syncretism led to a most rare and refined product. Because of its complex and deep heritage, Essenism had a unique power and reputation in both the Jewish and the Pagan worlds.

The ground was thus well prepared for the birth of Christianity, a sect that was originally Jewish and Essene, and one that would go on to conquer a large part of the globe.